This year has been an exciting year for throwbacks. Whether you’re talking the return of Rob Liefeld’s Extreme Studios or of the once mighty Valiant Comics, the industry has seen huge returns from surprising new versions of old ideas. One of the major figures in the latter has been Warren Simons, the Executive Editor of Valiant Comics and a former editor across many incredible books like The Immortal Iron Fist from Marvel. We talk with Simons today about the return of Valiant, what he has thought of their successes to date, and much, much more. Thanks to Warren for the chat, and look for more from the Valiant {Re}visions team soon.

For you not just as the main man of the Valiant universe, but also as a fan of comics, what made the timing so right for bringing back Valiant?

Warren Simons: That’s a great question. I think there are a few reasons why it’s such a great time for Valiant to return. Above all else, Valiant’s got an amazing roster of characters, many of which have left an indelible impression on a generation of comic book readers. Everywhere Team Valiant has gone, from local stores in midtown Manhattan to cons in Charlotte and California, we’ve had fans telling us how excited they are that we’re back. X-O Manowar, Bloodshot, Harbinger, Archer & Armstrong, and Shadowman — these are iconic characters that helped redefine the medium and fans have been waiting for their return.

It’s also an incredible time to be working in our medium. Talented creators are telling groundbreaking and dynamic stories on a monthly basis, and there’s a palpable sense that comics are helping to guide pop culture. The direct market is obviously a very competitive space, but I think the timing is great for Valiant’s return.

Did you read Valiant books in their original incarnation? If so, what books spoke to you and why?

WS: I thought Archer & Armstrong was quite brilliant. Barry Windsor-Smith is a visionary artist, and he’s an extraordinary writer as well. His take on A & A was the superhero genre as seen through the lens of Monty Python, and those comics are still fresh and relevant two decades after they came out. They have aged perfectly.

When you and your team were looking to develop this new version of Valiant, what did you look at in the older iteration of Valiant as things to readopt, and what lessons did you learn from that first run?

WS: Another great question. Valiant has an interesting history. The company launched in 1989, and reached fairly stratospheric levels of success in the early- to mid-90s due to key contributions from creators like co-founder Jim Shooter, Bob Layton, Barry Windsor-Smith, David Lapham, and Joe Quesada. In 1996, video game maker Acclaim purchased Valiant and the entire line was rebooted to make the characters more video game friendly. While there were some brilliant creators involved in the reboot — some of my all-time favorites — it didn’t resonate with the fans like the initial iteration of the Universe.

What we wanted to do with this version of the universe, above all else, was to create great stories and modernize the characters so they were relevant to today’s audiences. We wanted to tap into the core concepts and themes that made them so compelling in the first place. We were also looking for characters that had pouches on their outfits. Pouches are crucial to our medium, especially if you can hide a gun or a grenade in them. 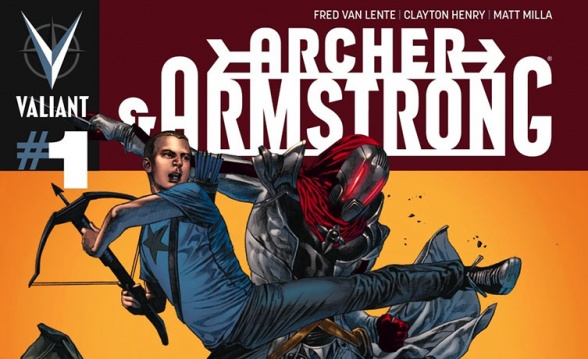 The creators featured so far have been a great blend of writers with a ton of indie cred but also commercial success as well as lesser known but highly talented artists. When your team was originally looking to fill out the creative teams, what attracted you to the ones you chose above others?

WS: I read a lot and spoke to many terrific writers and artists as we began building the Valiant Universe. My homeboy David Aja and the great Jelena Kevic-Djurdjevic, two of the most talented designers in the industry, put together some killer takes on the characters, which was incredibly important to shaping the identity of the titles. As we began to develop pitches, I reached out to Robert Venditti, who’d written the brilliant Surrogates and Homeland Directive, and we had a nice chat at SDCC a few years back. He’s one of the nicest, hardest-working guys in the medium. He’s an absolute gem, and had some fantastic ideas for X-O Manowar, which Cary Nord has just drawn the heck out of. If you’ve read Unknown Soldier by Joshua Dysart — which is beautiful and heartbreaking — you’ll see why he’s a gifted writer. And I felt Khari Evans, who had done some work for me at Marvel, would be a great fit for that book. Duane Swiercynski and I had worked together at Marvel on a few collaborations, and I knew that Manuel Garcia would be able to really nail the action. And Fred Van Lente and Clayton Henry threatened me. Not cool, guys.

I had the opportunity to team up with many of these cats during my time at Marvel, and knew they’d be a good fit for Valiant. In other cases, I felt like the writer or artist would be a perfect fit for the tone of the book.

You edited Marvel books for a large part of your career; does that experience influence your approach to the Valiant relaunch or are you having to learn a whole new set of tricks?

WS: Marvel was a great experience. I got to collaborate with some amazing people and work on some incredible characters. Editing comics at the biggest comic book company in the world certainly helped shape my career. But, as we launch a universe and a publishing division within a company, it definitely requires a different approach and a new set of tricks. I work with a super team upstairs and have some dedicated colleagues, and we all love comics and are striving to create compelling stories on a monthly basis.

Given that it was a $3.99 debut, X-O Manowar’s #43 debut was a pretty stellar opening salvo for sales for your team. What do you think contributed the most to that title’s success, and what did your team learn from that release that they’re looking to use for other titles as we approach them?

WS: Thanks for the very kind words. X-O Manowar is a great character, and we had a stellar creative team with Robert Venditti, Cary Nord, Stefano Gaudiano, Moose Baumann, and Dave Lanphear on board. The entire team upstairs, including Hunter “The Hunter” Gorinson, eats and breathes Valiant comics, and we really wanted to make sure this was a terrific launch. Of course, the credit is truly due to our INCREDIBLE fans who are our backbone and to our retail partners who continue to support the books.

What do you think separates the Valiant characters from other superhero universes?

WS: Pouches. Not just the number of pouches….but the placement of said pouches. And stellar characters. Characters like Archer and Armstrong — the only heroes willing to take on The One Percent. And villains like The One Percent, who are the only villains in comics willing to blow up Greece to save the Euro. Characters like Faith Hebert that you’ll see outside your window and who might look like you or me. Characters that make bad decisions and live with the consequences, or can’t. I think there’s a level of emotional honesty in the work that fans continue to respond to.

So far, you guys seem to be rolling out about a title a month. Do you plan on continuing with that same launch schedule for the foreseeable future?

WS: Our next #1 is Shadowman, by the brilliant creative team of Patrick Zircher and Justin Jordan, which launches in November. The guys are absolutely killing it. 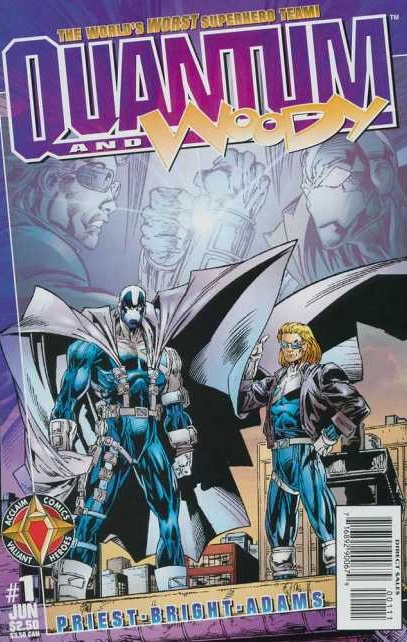 While there are a number of Valiant titles we’ve heard nothing about returning quite yet, the one that I’m most curious about is Quantum & Woody. I suppose technically it was an Acclaim book, but I think the rights still fall with you guys. So the question is this: are there any plans for that deadly duo?

WS: We love Q & W, and we were just talking about them in the office this past week…

Over the last decade, the big two have pretty much built their entire business model around doing one blockbuster crossover event after another. Does Valiant have any plans to follow suit, or will you be shying away from that particular trend? Infinite Unity War, anybody?

WS: I think the big two have done so because the market has responded to those events. If the brilliant FURY MAX by Garth Ennis and Goran Parlov and Matt Hollingsworth was at the top of the charts, we’d see a lot more titles of that ilk, and we’d have more lines like “I lick up war like it was sugar.” But DC and Marvel and other companies will continue to respond to what sells in the marketplace. I know some people love it and some people hate it, and that’s certainly one of the challenges a new company needs to navigate in a very competitive marketplace.