What artists really impressed this year? 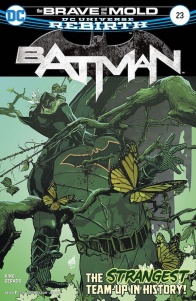 Benjamin Percy (“Green Arrow,” “Teen Titans”): Mitch Gerads captures emotion brilliantly with body language and expression. He’s also a very patient artist, which I appreciate, since so much in comics feels frenetic, rushed, too much packed into too little space. I like it when a comic will let a moment breathe. Give the character a beat to stare silently into his coffee, thoughtfully stroke his beard.

Clay McLeod Chapman (“Lazaretto,” “Edge of Venomverse”): I’ve been imbibing on a lot of BOOM! Studios this year, considering they gave “Lazaretto” a home… There’s a lot to recommend, but I’ve got to say the best comic reading experience I’ve had was tackling KaBOOM’s “Mega Princess” with my 5-year-old son. I took him to New York Comic Con for the first time, and to induct him into cosplay, he wanted to go as one of illustrator Brianne Drouhard’s ‘animals: the monstrous fox’ from issue #1-2. Total blast. Thank you, Brianne!

Rafer Roberts (“Harbinger Renegade,” “A&A: The Adventures of Archer & Armstrong”): I guess I’m just gonna keep talking about “Mister Miracle” because Mitch Gerads is freaking amazing. He’s made me a fan of digital effects in comics. And his pacing! Oh man, it doesn’t get much better than that. Marley Zarcone’s work on “Shade, The Changing Girl” is deceptively simple, but always wonderful. And Aaron Kuder, in my mind, is also amazing, and I could stare at his linework all day. 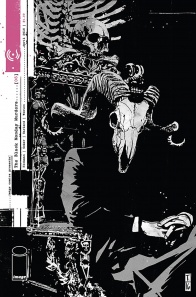 Tazio Bettin (“War Hammer 40,000,” “Independence Day”): I discovered Tomm Coker through “The Black Monday Murders” and his style everything I love about the realistic, noir style, not unlike what was accomplished by Steve Epting’s take on “Velvet.” It was a revelation, and I realized there is much I can learn from his example to improve my own technique.

I also wasn’t expecting Cyril Pedrosa’s “Portugal.” I need to buy more comics based on their covers, I guess.

Here’s another shameless collaborator plug, but Buster Moody and Chad Thomas made comics I loved (that I only happened to co-make with them). 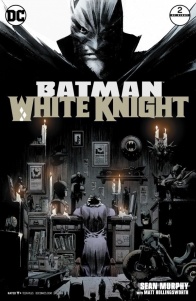 J.K. Woodward (“Star Trek: Mirror Broken,” “Micronauts”): Mitch Gerads. I’ve been a fan of this guy since I discovered a fun little classic, action/scifi adventure called, “Johnny Recon.” I watched his work after that with great interest, from “The Activity” to “Sheriff of Babylon,” “The Punisher” – but when I saw his work on “Mister Miracle” I was blown away. I know he works digitally, but there was a lot that looked organic. The ink splatter looked natural as did some paper fatigue and pen scratches, etc. I think rather than relying solely on digital brush patterns, filters particle generators, etc., he was actually scanning in some real stuff and compositing. Whatever he was doing, the result was an organic and almost organized chaos of some of the best ink work I’ve seen. He would use these techniques to great effect too. I remember when I first saw his Orion, the character itself had extra grit, scratchy lines, ink splatter, etc.,but the helmet rained simplistic line work, looking almost pristine. In my opinion, Mitch was expressing a character nurtured and provided for by a benevolence that still couldn’t cover up the corruption of his lineage. I think that, despite his success in this industry, Mitch Gerads is still woefully under rated.

Ray Fawkes. Particularly his work in “Underwinter.” I love that sort of visceral design, where an artist will create the mood, or draw the feeling, or kinetics over(but not necessarily at the expense of) the realism of perspective, anatomy, etc. I’m creates a sense of what you’re seeing; creating a sort of hyper reality that transcends reality. It reminds me of the first time I saw Sienkiewicz’s, “The Stray Toaster.” The art creates a sense of experiencing the comic more than simply reading it.

I should also mention, Jim Mahfood. His work in “Grrl Scouts: Magic Socks” accomplishes the same.

Cavan Scott (“Doctor Who,” “Star Wars Adventures”): I loved Caspar Wijngaard’s art on “Angelic.” Some great world-building there. And I thought Vanesa R. Del Rey’s “Redline” was the stuff of nightmares… in a good way. Exquisitely disturbing.

Jon Davis-Hunt (“The Wild Storm,” “Clean Room”): There are so many incredible artists around at the moment. Can I mention Daniel Warren Johnson again? I really enjoyed Jason Fabok’s work on ‘The Button.’ Fiona Staples continues to be amazing on “Saga.” I also discovered Fernando Pasarin’s art on “Justice League” which I thought was amazing. And Sean Murphy on “Batman: White Knight.” His work is always fantastic. Oh, and definitely Tomas Giorello. 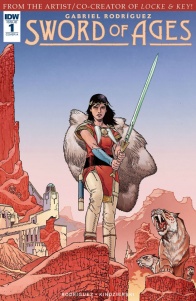 Jeremy Lambert (“Goosebumps: Monsters at Midnight,” “Attack on Titan Anthology”): Bilquis Evely is out of this world good. Michelle Wong, too. And Ibrahim Moustafa!

Rob Williams (“Suicide Squad,” “2000AD”): I think Nick Derington is the one artist who I wasn’t aware of previously who just made me go ‘woah’. I knew Daniel Warren Johnson’s work previously but “Extremity” is amazing work. He gets movement and momentum on the page while never sacrificing storytelling clarity. Chris Samnee and Doc Shaner are both amazing. In terms of people I’ve been fortunate to work with, if you’re looking for up-and-comers, I’d keep an eye on V. Ken Marion. He just got better and better on our “Trinity” run.

Raúl Allén and Patricia Martín (“Secret Weapons,” “Wrath of the Eternal Warrior”): In the integral edition of “Alack Sinner,” I was completely blown away by José Muñoz. Seeing the evolution in his style through the years is amazing.