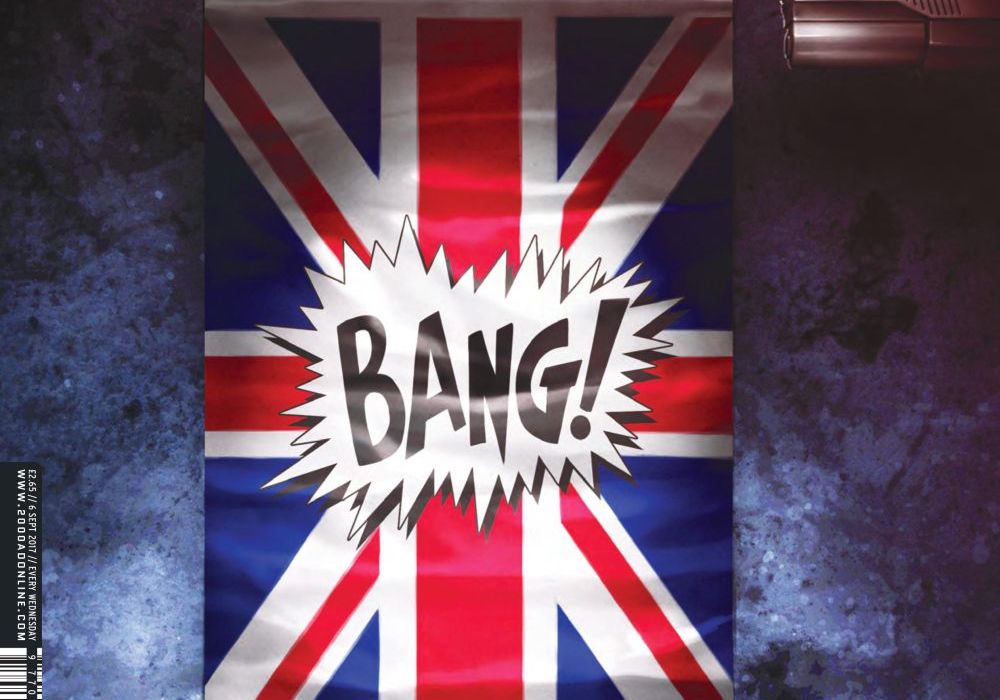 The anthology was once a staple of comics, with nearly every publisher putting out at least one anthology a month. That has shifted, especially for American comics, but there are still a number — both domestic and foreign — of anthologies that are pretty great. 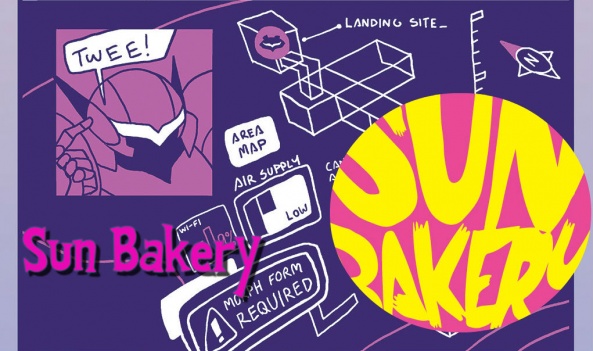 I wish I could recall what comics blog it was  I first read about “Sun Bakery” by Corey Lewis, as I need to thank that person. Corey Lewis’s energetic, exuberant, experimental comic fills that hole in my comics world that used to be filled by newspaper manga anthologies. “Sun Bakery” owes so much of its comics DNA to the influences of the cheap multi-colored disposable newsprint anthologies like “Shonen Jump,” “Young Jump,” or “Afternoon.” His wild imaginative storytelling uses the language of manga mixed with that of video games, a bit like Bryan Lee O’Malley’s “Scott Pilgrim,” to tell stories that are an interesting fun puzzle like experience. Lewis started doing comics in an underground, DIY punk rock zine format, and he’s kept that ethos as he’s gotten a bigger distribution and fan base. He’s full on doing his own thing, experimenting with style, color, and storytelling, with an energy and enthusiasm that, for the most part is lacking, in corporate work-for-hire floppies and OGNs. “Sun Bakery” is a manga-inspired pop art experience delivering sci-fi, buddy comedies, violent salacious westerns, one page stories, weird off color comedy, and love letters to the video game Metroid. Lewis is doing black and white comics against a flashy color backdrop that is neon and bright and far far outside the norm of the US mainstream comics market. – Greg Lincoln 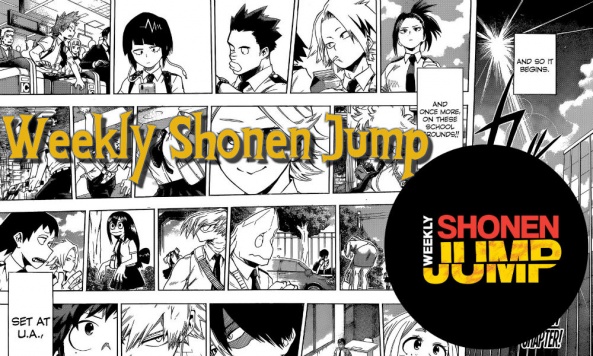 One of my favorite things to cover at Multiversity is manga, and the lion’s share of the content I consume comes from “Weekly Shonen Jump.” In my humble opinion, this weekly digital magazine offers the best value in all of sequential story-telling. For a measly $0.52 an issue, readers get anywhere between 200 to 300 pages of story, sometimes even more! The selection of stories within “Weekly Shonen Jump” represent a variety of genres including action, fantasy, sci-fi, romance, sports, comedy, and horror, with numerous combinations and permutations to boot. While not every comic will appeal to everyone, the sheer breadth of content and the constantly expanding and rotating roster is both exciting and engaging.

In 2017, several newer stories made strong impression. “The Promised Neverland,” an addition from late 2016, truly came into its own this year as one of the most compelling and nontraditional stories in the magazine.Newcomer “Boruto” managed to differentiate itself from its long running predecessor in interesting ways, making the most of its now monthly format. “Robot x Laserbeam,” a rather lackluster “jump-start,” managed to find strong footing later in the year, thanks to a its brisk pace and outlandish representation of the sport of golf. The magazine was further rounded out by stalwarts such as “One Piece” and modern classics like “Food Wars,” “One-Punch Man,” and “My Hero Academia.” If there’s one area the magazine faltered, it’s the lack of compelling new series. Many jump-starts were tested this year, but only a few stuck. The aforementioned “Robot x Laserbeam” being the exception, many of the jump starts this year were very disappointing. The fact that “We Never Learn” not only was picked up as an ongoing series, but continues to run within the magazine, is a huge disappointment. Nevertheless, the future continues to look bright for Weekly Shonen Jump, and I look forward to what 2018 has in store. – Zach Wilkerson 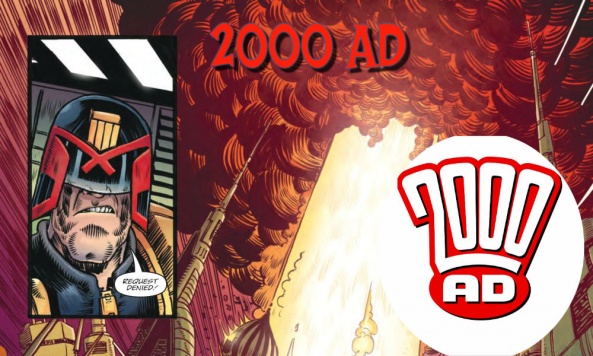 It might have been easy to base this decision on “2000AD” celebrating its 40th anniversary and to simply call it a day. That an anthology can keep the marathon going year after year after year without its legs giving out is one thing. But to consider the strength of 2017’s makes it even more remarkable.

From murder-police procedurals in the lumbering catacombs of an empty space station (“Brink”) to swashbuckling mashups of pulp romanticism and Lovecraft (“The Order”) to the retro-futurist War of the Worlds continuation that feels so much more vital than that log line implies (“Scarlet Traces”) to an alt-history Hollywood-heyday noir stained with ancient, Occult evil (“Hope . . . for the Future”), to the everyday grind of the grunts working intergalactic customs detail (“Grey Area”) to multiple flavours of zombie dirge (“Defoe,” “Fall of Deadworld”), “2000AD” offers a slice of the pie to genre aficionados of all sorts. It might not all be for you, but you can be sure to find at least some kind of thrill-power to fit your flavour.

And we’ve barely even touched on the big man himself. The “Judge Dredd” strips feel as vital as they ever have`. The political and social climate of 2017 offered up plenty for writers like John Wagner, Rob Williams, Michael Carroll to reflect back in the darkened lens of Joe Dredd’s helmet. Early in the year, Tiernan Trevallion sent Dredd to Texas City, and more recently PJ Holden shipped him to Siberia, in what were some of the slickest and most kinetic six-page installments of the year.

But where “2000AD“ truly shines is in making each installment of each strip feel consequential each week. For a weekly anthology with stories often extending over 10+ issues, “2000AD’s” strips rarely fell into the trap of just jumping from one cliffhanger to another week after week after week. The writers and artists were be mindful of how to correctly pace the storytelling, so that when taken as a whole, entire issue becomes a collage of sci-fi shenanigans, fantastical action, character development, and subtle social commentary. – Kent Falkenberg

Matt: Overall, a nice collection of material. It was sad to see something like “Island” go this year, but some of these other books have more than made up for it. I love anthology collections like this and think it’s a great way to discover new voices and talent. I wish American comics would be better about getting with the program.

Alice: What’s interesting to me about this list is that both “2000AD” and “Shonen Jump” are books that have been around for years if not decades by now, but really felt like they hit a new level of saturation this year. For the longest time, “2000AD” felt like the niche kind of British science-fiction that only some Americans knew about like Red Dwarf and Warhammer 40,000, but this year showed that it’s a real powerhouse contender in the Western comics market. And with “Shonen Jump” bringing shonen manga to English language audiences and “Sun Bakery” touching on the world of independent anthologies out there, I’m pretty proud of this list.

Brian: I, too, am proud of this list. I’m even prouder of how broad our staff’s tastes were in the initial voting. Books like “Annual,” “Bitch Planet Triple Feature,” and “Now” all are quite different than the three books represented here, and those six – along with “Black Crown Quarterly,” “Star Wars Adventures,” and “Paklis” – made up the bulk of our voting. I echo Matt’s statement that I wish American comics did more anthologies, but looking around, it appears that they are doing more than, perhaps, we realize.