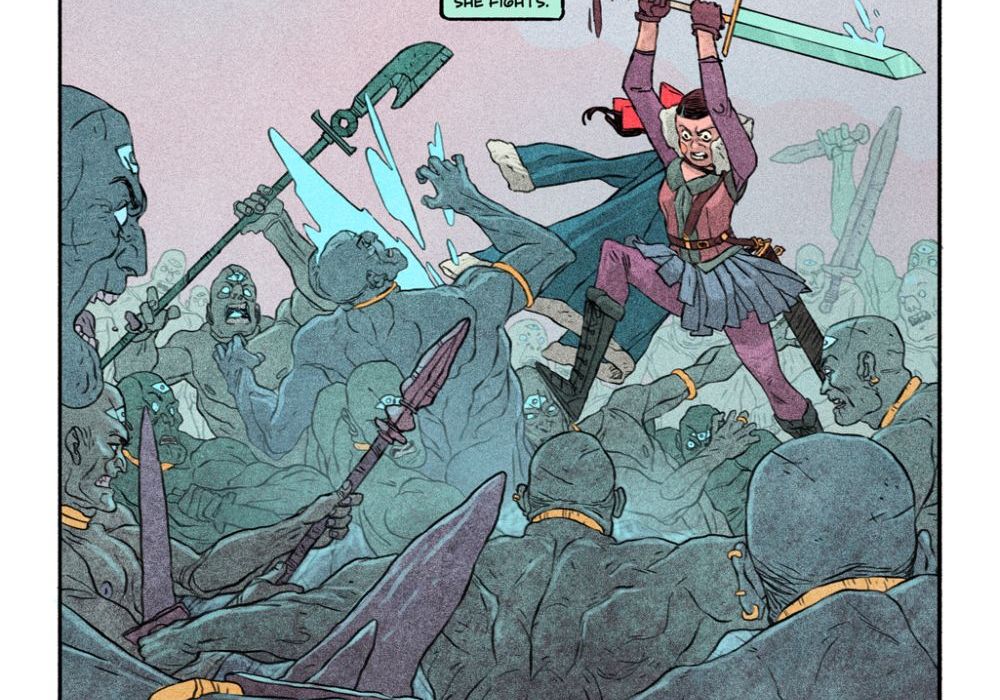 Columns
Best Digital First or Webcomic
Now more than ever, people aren’t necessarily getting their sequential art from books purchased at a store. In many cases, some of these books aren’t available in print at all, or at least not for a considerable time after they appear on line. These are some of the best of both digital first comics (collected every few months in print) and webcomics (maybe collected, maybe not). 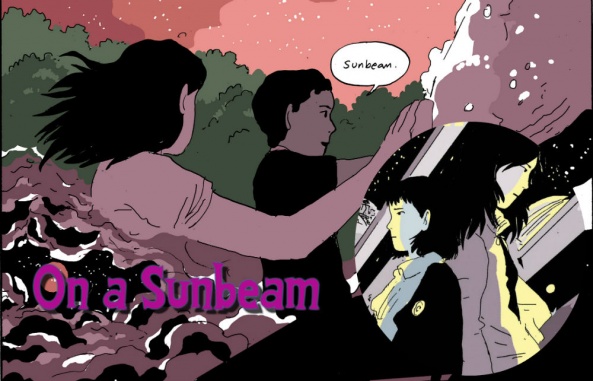 Webcomics as a medium is a difficult one to be a part of. It is a grueling process for creators, who don’t have the benefit of being a part of a larger team and oftentimes having to be the writer, artist, letterer, colorist, editor, publisher, and marketer for their work. They must work tirelessly just to keep a consistent schedule, many only able to produce a page or two a week, others less. Because of this, it can often take a maddeningly long time for a story to reach an end.

So, when a webcomic project comes along that drops one full chapter, every week, for an entire year, in color and then completes its story in a satisfying way– that comic is something that should be paid attention to.

The fact that it gets better and more intricate with each chapter is what makes it special and earns itself a place on this list.

Tillie Walden’s “On a Sunbeam” is worth all the praise that’s heaped upon it and more. It is a queer sci-fi story about a group of restorationists who travel a vast galaxy, brimming with stars, in a fish ship, fixing up relics, like entire temples on abandoned planets. The story begins with us following our main character, Mia, on her first day on the job and the rest of the story unfolds from there.

There are so many things to love about this comic: from the design of the ships (again, these ships move like fish!) to the physical locations that pop with pinks and blues and yellows, each location feeling deep and full. She uses full page spreads too capture the beauty and the vastness of space, littering it with stars and rich hues of orange and blue, while other, smaller moments are captured in the quiet introspective faces of our characters.

“On a Sunbeam’s” story is at once simple but also deeply intricate, telling us multiple stories of love, letting go, and the definition of family, all couched in couple larger narratives. We have our space-faring adventure narrative but we also have the quieter narrative of two girls learning the trials of love while they try to survive a boarding school.

These two threads, along with the stories of the other characters, weave and cross throughout the comic, joining the events together so that it all feels coherent and consistent; the information learned in each helping to redefine our expectations and feelings towards the seemingly disparate storylines. If this is where Tillie Walden is starting her career (“Spinning” having come out after this), I cannot wait to see where she will take her stories next. – Elias Rosner 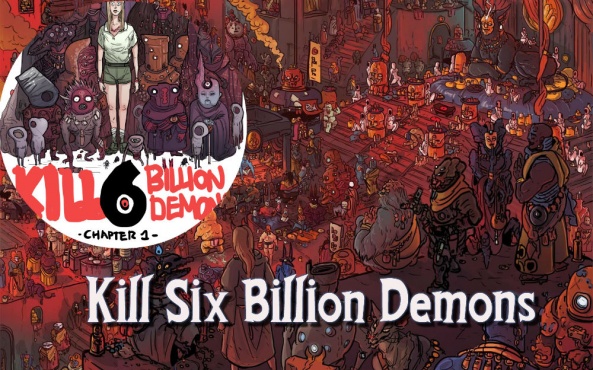 Tom Parkinson-Morgan, or ABADDON, has had a killer year on his webcomic “Kill Six Billion Demons”. If you haven’t heard of the book by now, it’s still the perfect time to jump on. Parkinson-Morgan is an artist heavily influenced by high-detail workers like James Stokoe, Bernie Wrightson and Moebius before him. This concept is part of his audience-engaging fun too – you can include a submission of a kind of demon that you want, and sure as hell, Parkinson-Morgan will pop it into the background.

While the story is also influenced by reader suggestion, there’s an underlying theme tying back to Hindu religions and even Pagan aspects. If you’re a lore-o-phile, Parkinson-Morgan gives you plenty to dive into here. With this year heading into the back end of Book 3, there’s so much world building to get into, and heavy character development. The protagonist herself, Allison, has undergone a dramatic change with a surge of power, turning from sorority cheerleader to hardass demonslayer, and the rest of her crew in the Yamga are all just as interesting and believable.

You can support this book by purchasing the handy pocket size release from Image Comics of volume one, and the second volume coming on January 3rd or supporting Abaddon on Patreon. Regardless, this continues to be one of the most enjoyable and layered webcomics around these days, which is still trucking in full speed. – Rowan Grover 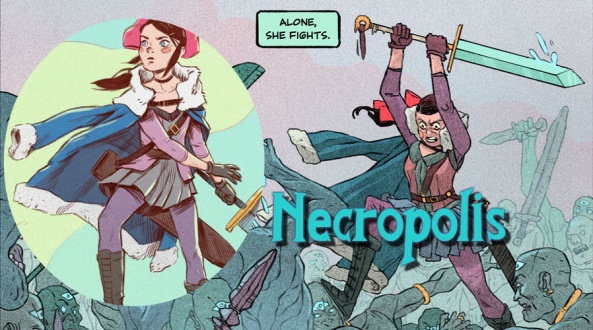 Jake Wyatt’s “Necropolis” might appear irregularly at the best of times, but whenever it does, it’s almost an event. In fact, if someone else without Wyatt’s clout or execution relied on this schedule, the comic would have floundered and been forgotten. The story is stylish and exciting, the humor black and the action intense, the themes darker than the color palette would have you believe. Wyatt’s designs throughout are something to behold, intricate and alive, enveloping and captivating. Even after two years running, it’s difficult to see where the story is going, with its gods, monsters, swords, and weird fantasy politics, but Wyatt is so strong at delivering each scene, you barely notice it.

“Necropolis” is the story of a young girl named Clara who, reacting to the destruction of her village by some bandits, sells everything she possesses for a magic sword. This gives her an enormous power and attitude to watch. Soon, she gets noticed by the higher echelons of the kingdom and . . . that’s where Wyatt’s stopped.

The most interesting webcomics take advantage of that infinite canvas and push the limitations of the medium. Wyatt skirts the line between something for the printed page and something we consume on a screen with every update. This can most significantly can be seen in the prologue, where you scroll through the backstory while decorations line the margins and lead you lower through the page. Sometimes he goes for horizontal panels, which don’t always work, but his thinking about when an action will be revealed or how we’ll read through something help carry the story significantly.

“Necropolis” is still developing but at least it has something it’s developing toward. Even with an irregular schedule, we can always lose ourselves in the images and the atmosphere Wyatt’s evoking. – Matt Garcia

Brian: This is an area that we, as editors, have been trying to get more coverage of for a few years now, with decidedly mixed results. There are simply so many webcomics out there, that it can feel a little daunting to jump right in, and even more daunting to try to cover them in a way that feels anything but scattershot.

With that long caveat, I think all three of those selections show exactly why this is the future of comics in so many ways. It is a format that allows even more experimentation and innovation, and yet can also feel far more personal and reactionary than a print book. I’m excited to try again in 2018 to amp up our coverage. If you feel a similar urge, jump into these three titles; you won’t be disappointed.

Matt: Even though they’ve been around for years, webcomics still feel very much like the Wild West of the medium. You have stuff like “Kill Six Billion Demons,” which don’t necessarily use that infinite canvas thing (though I do love when it goes into these insane prose narratives, which are unfortunately missing from the Image trades), but is a place where Tom Parkinson-Morgan can stretch his imagination. Waldman structures “On a Sunbeam” in these giant chunks and scenes, which makes for a great reading experience, but there’s nowhere else she would have been able to explore her themes and storylines than on her own. And I wrote all about “Necropolis” above. Webcomics are still in a very word-of-mouth corner of comics, by which I mean we seek out the ones we hear about. Hopefully in 2018, even more work comes across our radar. Even with Ajit Pal currently shitting the bed.

Alice: I’ll be honest: I don’t pay as much attention to webcomics as I should. I find it hard enough to navigate the world of print comics as it is. But even I’ve read Jake Wyatt’s “Necropolis” and it’s one of the best comics I’ve ever read, in print or online.