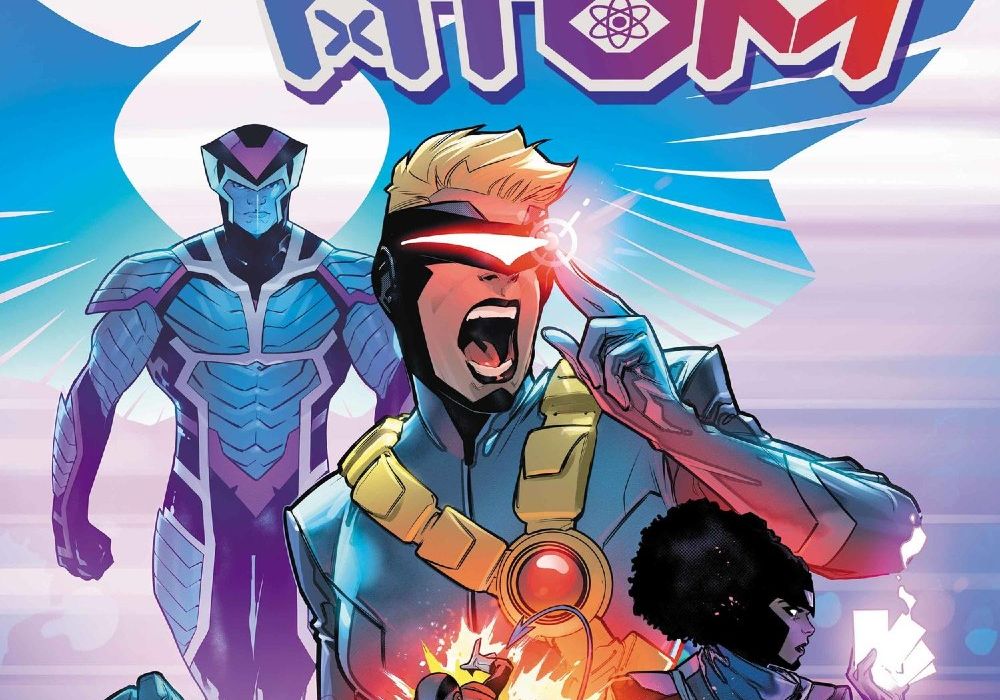 The ‘Breakout’ Categories are among our favorites each year, but also present challenges. How do we determine who is a breakout talent? We have a sort of internal logic, but we still debate these categories more than any other we put together. That said, we’re very proud of this list, and hope that you guys enjoy this list of the breakout writers of 2021. 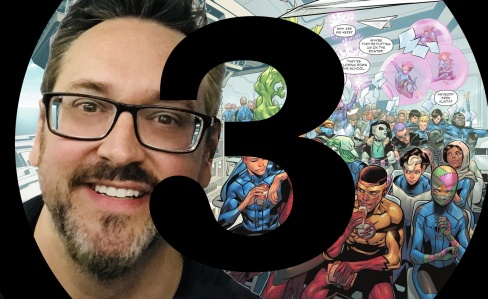 When I read “Future State: Teen Titans” #1 back in January, I had to do some Googling. Who is Tim Sheridan? How have I never read a comic by him before?

Well, it turns out that this was his first published comic. I was gobsmacked. While his work in animation obviously gave him experience with scripting and character development, the writing was so confident, assured, and heartfelt, that it was hard to believe this was his first journey in the medium.

Sheridan established himself in 2021 as the architect of the youthful side of the DC Universe in “Teen Titans Academy,” a book that’s scope and ambition is truly staggering. From bringing in multiple generations of heroes under one roof to establishing a whole new set of characters to building a year-long mystery – who is Red X? – the book has been spitting out ideas at a furious pace. The series also spun off a “Shazam” miniseries that allowed Sheridan to further explore a few of the characters from “Academy.” Sheridan has built so much in less than a year that it seems almost impossible that everything will have enough time to get its due.

In a space that has been bogged down by decompression, Sheridan’s superhero stories are a callback to an era where every issue, if not every page, suggested new stories and possibilities. Let’s hope that this is not just a detour into the world of comics, but the beginning of a long career. – Brian Salvatore 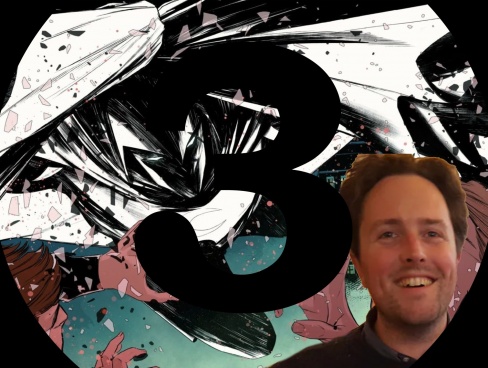 I’ve been an avid member of the Jed McKay fanclub since the day I first read “Man Without Fear” #1, it grabbed me by the horns, dragged me through the dirt and left me gasping for breath. Two years later and I’m still trying to catch it. Jed McKay is one of the most central names in the Marvel Comics Bullpen, headlining two(!) major events in a year, blaring across some of the most stylistically strong ongoing series currently out, and even dipping his toes into work at BOOM! Studios.

Possibly McKay’s greatest strength is his knack for casually codifying certain characters and structures within the MU and then building great adventures on top of that new structure. You can see it in his summation of Moon Knight’s mental state, pulling together all that disarray without any of the past hatchet job retconning necessary. He’s also amazing at episodic comics like “Black Cat,” “Taskmaster” and ‘Infinite Destinies,’ that take the medium back to its roots while still carrying modern sensibility and continuity, all while dabbling in some of the genres that don’t play as well with superheroes like heist stories and murder mysteries.

McKay has made a beautiful mix of insightful plot structure, digestible comedy and irreverent use of continuity his signature at Marvel, and his stories are only getting more technically impressive. Right now we’re watching as “The Death of Doctor Strange” has Strange autopsy his own continuity, while “Moon Knight” mixes psychological horror with slice of life, “Taskmaster” even used its movie tie-in status to flip the plot on its head and make Black Widow the slasher in her villain’s solo story.

This is Jed McKay’s first real year to branch out on his own stories, with his own consistent partners, in his own particular style. This has been his chance to show readers what he can do, and it’s a pretty impressive showing. – James Dowling 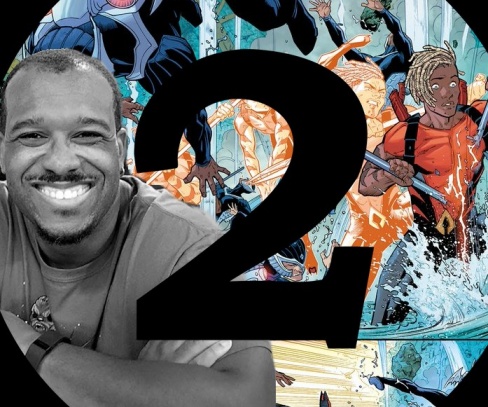 Brandon Thomas has been knocking at the door of the “breakout writer” category for a couple years now, thanks to “Excellence” at Image and some of the scattershot anthology work he had been doing. As infrequent as it is these days, “Excellence” is still quite good, but the bulk of Thomas’ 2021 in comics was spent doing varied, vibrant work on various DC properties. In the “Future State: Outsiders” story, Thomas flexed real ability to get high-concept in a Morrisonian sense. While many Future State titles were content to move the dial only slightly forward with their characters, “Outsiders” showed a lot more confidence to push the core concepts of the property to surprising places, for instance, turning Black Lightning into a literal elemental of electricity.

Thomas trusted the foundations of this team that he had worked out in the pre-Future State “Outsiders” series and paid off on those threads. Thomas also planted some exciting seeds for 2022 over the course of the year, moving Jackson Hyde to the forefront of the only mainline Aquaman title on the stands, and commandeering a breezy, enigmatic “What if?” thriller with the “Aquaman/Green Arrow: Deep Target” miniseries. His take on Jackson Hyde in particular feels like the first truly great attempt to actually make Jackson a well-rounded character in the comic books and not just a good idea pulled from a television cartoon. Next year’s “Aquamen” status quo promises that Thomas (paired with “Black Manta” writer Chuck Brown) will keep the reins of everything Aquaman for the known future. That future is in very good hands. – Vince Ostrowski 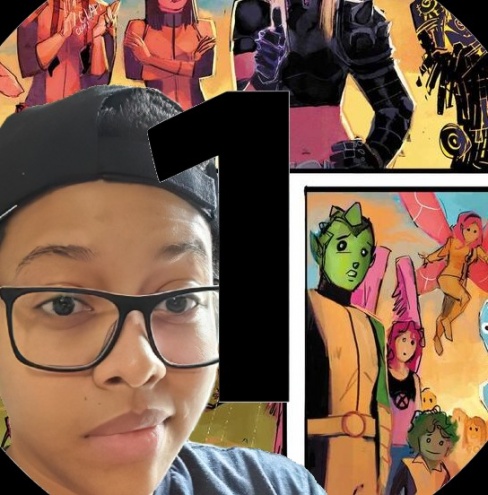 Is anybody in comics doing it quite like Vita Ayala? In an industry dominated by white men the the presence of a non-binary Black writer is innately exciting. Ayala’s rapid rise through the ranks of comics pros has been a wonder to watch as they churn out consistently thoughtful, fun, high quality books.

At Marvel, Ayala has made it a mission to be the writer of young team books. They breathed new life into “New Mutants” alongside artist Rod Reis exploring the deep wounds of some of the OG team members as they mentor a new group of young Krakoan mutants who are developing some wounds of their own. The short-lived but well-loved series “Children of the Atom” was an incredible entry in the X-Men line, following a group of mutant-fanatic teens trying to emulate their heroes. In “Champions,” Marvel’s non-mutant young heroes take on the likes of Roxxon and succeed! Through all of these books, Ayala takes the simple but radical step of treating young people like people. Rather than try to sell the characters’ youth by awkwardly working contemporary slang into the script, Ayala just writes how a scared 12 year old might react to a charismatic and confident (if scary) man giving them solutions to their problems. They write about teenagers’ thoughts and feelings as real and whole and complicated. As much as teen melodrama can be fun, Ayala opts for the harder but better task of writing full characters with normal drama (well normal superhero drama at least).

At DC, Ayala demonstrates their range through their work on “Nubia and the Amazons” with Stephanie Williams and artist Alitha Martinez and “Static Shock” and with ChrisCross. With “Static Shock,” they tell the classic story of a teenager becoming a hero but with the fresh and fascinating angle of the whole family being involved in the process. The tension of a kid who wants to be a hero and his family is both proud of and scared for him brings new layers to the story and in the process tells the story of an often forgotten subject- a normal Black family. In “Nubia and the Amazons,” the story of the new queen of immortal warriors is innately grand but told with startling emotional intimacy.

Vita Ayala has been delivering solid work for a while now but in 2021, they reached the next level. From mutant teens to Amazonian queens, Ayala has become a must read writer. – Quinn Tassin