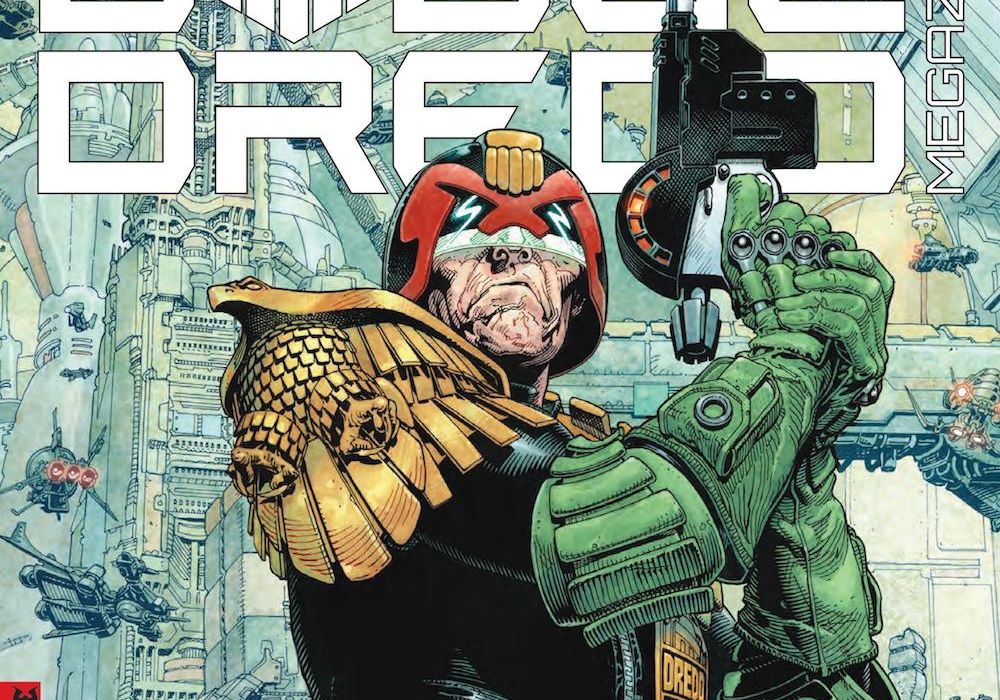 Christopher Egan: This week’s Judge Dredd one-shot is a hodge-podge of sci-fi action movie tropes and it is all great stuff. The story opens up with on of the PSI Judges trying to read Orlok the Assassin’s mind to extract some important information for Dredd. Upon learning that Orlok has a brain tumor the Judges decide to get him emergency surgery to remove the tumor, save his life, and save the crucial info they need. Dredd takes it upon himself to bring Orlok to the Cronenberg Institute for the surgery and their transport is immediately shot out of the sky. The story quickly spirals into a ‘Who wants Orlok the most’ and shoot-out/siege plot.

‘Grand Theft Royale’ blends hard sci-fi, action movie cliches, and bonkers classic “Judge Dredd” weirdness all together into one engrossing story. Lazer blasts, explosions, and talking ape mercenaries are all part of this wacky one-shot. Wyatt’s script is both a strong standalone chapter, and showcase of Judge Dredd history. Lynch’s crisp linework and perfect detailing is a perfect example of the beauty that can be found in the dystopian world of Mega City One. He makes it nearly impossible to pull your eyes away from the pages. Paired with Boswell’s colors is an equation of everything fans should want to see in a “Judge Dredd” issue. Beautiful all around.

Aside from looking damn good, Wyatt’s writing is truly a testament to how good these one-shot strips can be. One of the stronger recent entries in the world of Dredd. A subtle intelligence runs through this strip, which could otherwise be written like a dumb B action flick. 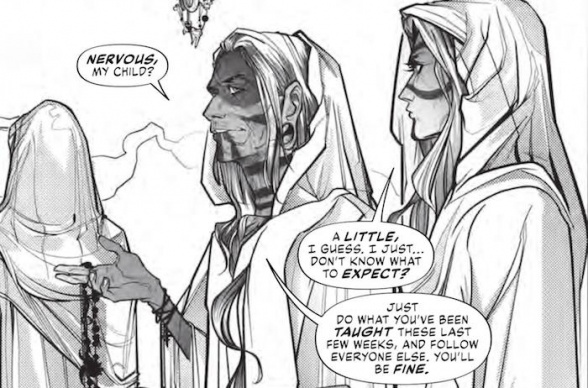 Greg Lincoln: “Tales from the Black Library” follows the storytelling tradition created by the classic titles “Tales from the Crypt,” “Vault of Horror,” and “House or Mystery.” David Baillie, through the eerie host character, gives us the backstory in a tantalizing, entertaining manner rather then making it an ungainly part of the someone’s dialogue. He can dive right into the middle of Mega-City 1 PSI division’s sting operation of a black magic cult. He’s able to give us just the major beats of the story cutting out otherwise necessary build up. Even if we don’t really know the main character Judge Callaghan, somehow the intimacy of the moments we do see are enough to make us care as things start to go awry. His artistic partner in this tale is likely responsible for making the story have such an rich intimate feel.

The appealing, bordering on scandalously sexy, artwork that Anna Morokova crafted grabs attention even from a quick flip through the story. Her flowing inks and beautiful faces seduce you into reading and, if you like her aesthetics, into really liking this story. The richness of the art is enhanced by the bold use of screen tones. With them she creates richer backgrounds, details psychic phenomenon and clearly defines the beautifully chiseled characters from one another. They give her art a three dimensional quality and texture that some black and white art sometimes lack. Everyone and everything ,including the demonic presences in the story, come off as of so pretty. I’m hoping for this story to be continued in some manner in the future, as mysteries remain after the final panel and, again, the art is very well crafted. 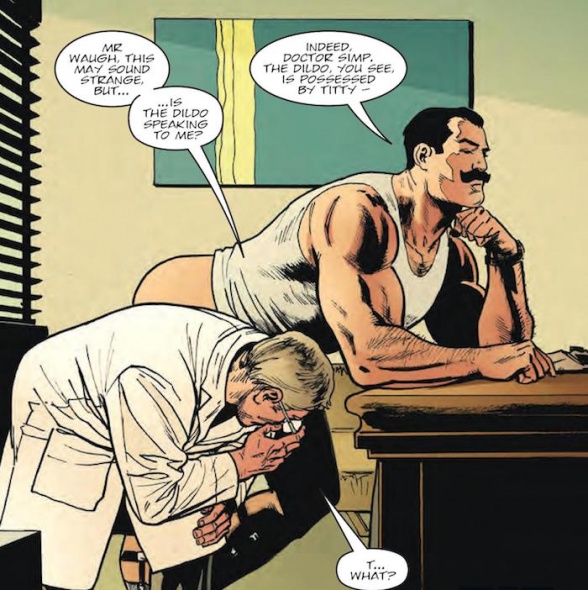 Gustavo S. Lodi: Devlin Waugh is madness. It is madness this series exists. It is madness that the situations and plot are what they are. It is madness how the dialogue choices play out. But it is really maddening is how it somehow works! There is a very thin line between having a lot of creative freedom, and actually knowing what to do with it, but it most surely is what Ales Kot does on his scripting on the titular hero.

This time around, Devlin and his demonic friend Titty play detective to understand why a certain healthy clinic has apparent fishy business. Going any further than that is a disservice to readers, as it exposes a number of lightning-fast reveals that push the momentum forward, in a sequence of absurd situations that could only really work in this scenario and character. And that is something else particularly strong about the series as a whole: it is built in such a way that it is really hard to imagine it happening to any other character. The same way that the same iconic men and women from the literary world have a certain aesthetics and world around them, Devlin does so as well.

The at this time around is not as strong, given a very dramatic shift in style halfway through this one-shot. It is not that either part is bad, but that the fluctuations among styles doesn´t really gel, and can even appear as two different artists altogether. Perhaps it was utilized to demonstrate a shift in time periods, but since it is not dramatic enough (minutes, rather than years) it falls flat, as it has no resonance on the story and themes.

Regardless of that, Devlin Waugh in ‘When I Was a Young Demon’s is another very strong entry to the broader series, one that leverages on the particular situation and character traits, and has richness in spades in terms of clever dialogue and plot devices. 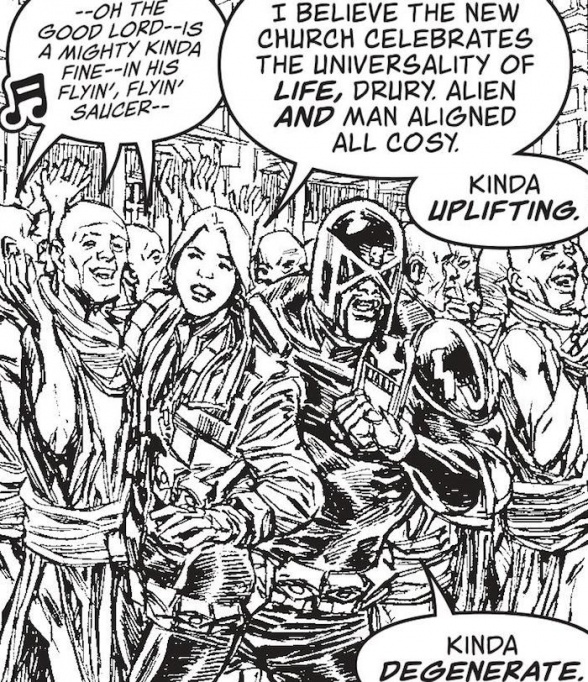 Matthew Blair: “Lawless Boom Town: 09” shows Marshal Lawson trying to nip Badrock’s organized crime problem in the bud by capturing the newly arrived enforcer Josiah Roke before he can become a major problem. Unfortunately for her, every other major political and law enforcement faction in her town has a reason to stop Lawson from doing her job and limiting her power in the town.

Writer Dan Abnett does a fantastic job giving every character and group a solid reason for their actions and weaving a nuanced and believable tapestry of small town politics and grand ambition. While Lawson wants peace and prosperity for the town she’s facing a massive hurdle of her SJS rivals who detest the idea of a peaceful, democratic society, the town’s corporate leadership who wants a haven for cheap goods and easy money, and the growing criminal faction that knows how to manipulate people into doing what they want. On top of that he even manages to inject some classic 2000AD Judge Dredd humor into the mix with a group of alien worshiping cultists. If the story has one weakness, it’s that things can be a little difficult to follow at times, but other than that it’s brilliant and wonderfully engaging.

While there’s a big action scene in the beginning, most of “Lawless Boom Town: 09” is made up of people talking, which means artist Phil Winslade is tasked with making blocks of dialogue look interesting. Fortunately, it’s not a difficult task since his art work is so detailed and realistic. Winslade manages to spice things up with lots of interesting low angle shots and massive close ups of people’s faces which allow for some great nuance and while it can be a bit difficult to keep track of who’s who at times, it has less to do with the quality of the art and more to do with the multiple plot threads of the writing.

“Lawless Boom Town: 09” shows the dream of a peaceful and prosperous small town coming apart at the seams due to avarice and greed. It’s a great piece of storytelling, building a believable and well developed tapestry of crime, business, law enforcement, and politics that threatens to develop further into violence and terror. 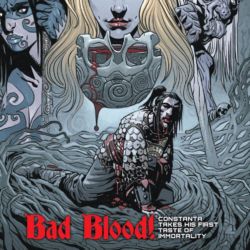 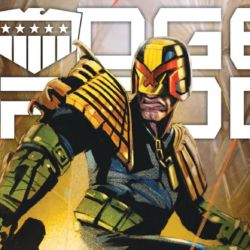 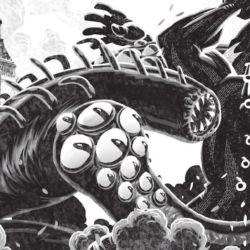