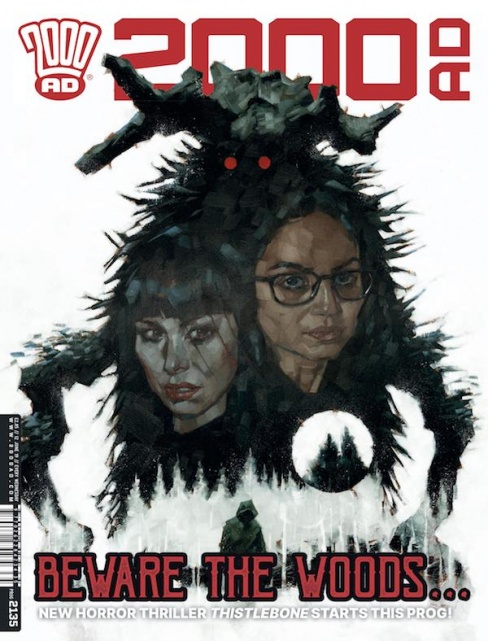 Matthew Blair: It’s the anti-technology group Rage against the Machines vs the cyborgs of Mega City One! Flesh and spirit vs. metal and programming in a duel to the death to decide the fate of the city! And it all goes about as well as ordinary flesh bag humans can expect to fare against cyborgs with enhanced strength and weapons.

Part of Judge Dredd’s appeal is just how insane the world of Mega City One can be. Sadly, while “Technophobes” has the potential to be crazy and interesting, it is sorely lacking. Writer Rory McConville has six pages to tell a story and uses that space to set up the anti-technology organization, show their conflict with a group of cyborgs, and have Dredd track them down to save the day. That’s a lot to cover in such a short amount of space and as a result, the story feels rushed, crowded, and uninteresting. Ironically, for a Judge Dredd story it could have probably been better if there was less Judge Dredd in it.

The same thing can be said for the artwork and coloring. While Inaki Miranda is a capable artist, the Judges in particular are well drawn and there is some great use of ambient lighting in several of the panels, but there is almost no action and no memorable moments. So much of the art is just people standing or sitting around and talking to each other, and most of the members of Rage Against the Machines actually seem sane and reasonable. In a setting where people overreact to everything in hilarious and violent ways, these characters seem bland and boring.

“Technophobes” is a Mega City One spin on a tried and true sci fi premise that is missing so much of the craziness that makes the setting so interesting and engaging. It suffers from being too crowded and would probably make a better story with a larger page count.

Michael Mazzacane: There are many spectacular things in “Scarlet Traces,” Martians are invading the planet, there’s refugees from Venus, etc. But the most spectacular and hard to believe aspect of the strip is something the Minder pulls off: making tasty British food out of stuff from a tin. That is a step too far. However, it is a nice excuse to take a breath and have a different kind of scenario for a few pages. Other breather strips are constituted as such due to characters often catching their breath after running for several strips. The breath is contrasted with the high action, in the shelter our duo is relatively safe and away from it. There is a distinct lack of tension.

Dinner conversation can get kind of awkward though, or just a bit boring, so Edginton uses it as a moment to reveal just what it is that makes Old Nan so special. She discovered something she shouldn’t have, the answers to why so few men came back from the conquest of Mars. The Martians were busy genetically modifying humanity and themselves to better interact within Earth’s ecosystem. They started to look like us, the perfect sleeper agent. Putting a The Thing like twist on top of all of this is an interesting note and should give the strip extra legs once the fighting dies down.

D’Israeli does a nice job of contrasting the chaotic broadcast room and the visual business all those screen bring with the quiet of a dinner. The backgrounds will drop out and you’re left with just these two sitting at a table, isolated from the chaos of the outside world. That setup is what gives everything such a feeling of calm. It also makes for a great visual when that calm is shattered, supported by Ellie De Ville’s lettering as something comes in on the radio. This interruption is viewed through the door into the their dining room with the lettering bridging the divide. Just a wonderfully composed panel that disrupts everything and brings you to the final page. 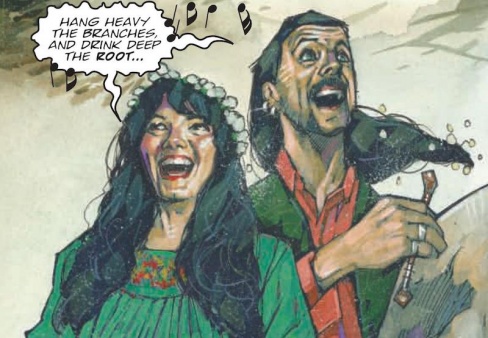 Gustavo S. Lodi: “Thistlebone” throws readers right in the middle of the story for its opening chapter. It is a compelling way to start a narrative, forcing it´s audience to grasp at straws and hints to really understand what is happening. On less-able hands, it can come across as convoluted and hermetic, but Eglington and Davis nail the pacing and exposition through sharply written dialogue and imagery.

Visually, “Thistlebone” looks unique: it mashes some elements one would expect on a horror story (the poorly defined figures in the dark, the bizarre otherworldly components), with those of a more familiar nature (the idyllic villages, the mundane diners). Character design is also on point, with special attention paid to the pallet around clothing and skin color, making each individual singular, without any outlandish design. Without going into spoilers , there are moments when the story takes a detour to the truly supernatural, but even then it is done under the guise of doubt, so readers remain questioning if what they are observing is a fruit of reality or hallucination. Some connective tissue to the first season of True Detective might be a good analogy.

This entire chapter is “narrated” through a conversation between a cult victim and a reporter. There is an honesty to their exchange, a certain rawness to the words that work remarkably well. These two individual come across as truly vested on the matter at hand, so the exposition, instead of bogging down the narrative, builds to it. Readers learn without realizing, and get engage with characters they´ve just met. Truly a great start. 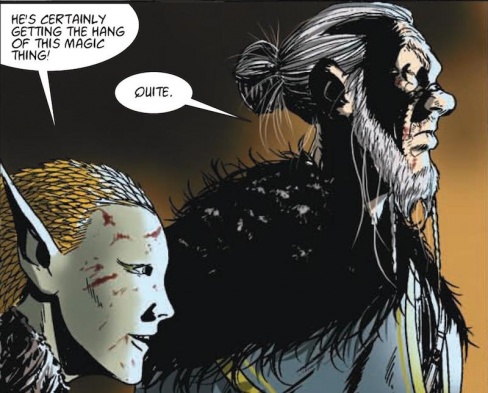 Greg Lincoln: With last week’s chapter introducing an entire new wrinkle to the story its a bit of shock that they brought “Kingmaker: Ororborus” to a close this week. Ian Edginton started outright this week through the dialogue between Crixus what he has implied in the Ora’s actions. The power bestowed on him by the Ebora is one much more creation, rebirth and change then one simple minded destruction. Edginton returns to his fun banter between the characters this week and revealing a little more about who they are or in the main characters case who they have become. It’s particularly nice to see more of the back and forth between Yarrow and Crixus, their relationship is perhaps the most interesting in the way it’s has developed. Though it’s a surprise that this is the final part in this arc Ian Edginton created a full enough feeling story arc here. He really resolved the plot points he created and gave enough character development to make the story feel satisfying. The cliffhanger he leaves us on is darkly ominous and a bit frustrating, but in a a way that makes us look forward to the next arc, “The Fall into Shadow” more. “Kingmaker” has been amusingly futile to second guess so it’s fun to speculate where Ian Edginton and his co creators will take this band of heroes next. This story was openly a time for change, Crixus said it best when he refused his father’s apology and told him “We cannot move forward carrying the burdens of our past.”

Leigh Gallagher gets to play on his strengths this week as the talking heads scenes return starring the main cast. He excels in choosing dramatic angles and interesting closeups that imply things about the scene. The head angles he chooses even for some of the solo panels he implies scale between characters as with the Stone People or the camaraderie between the allies. It’s just that closeness that allows the moment that happens in the end to happen. The image Gallagher drew implies something as dark as the title of the next arc does.