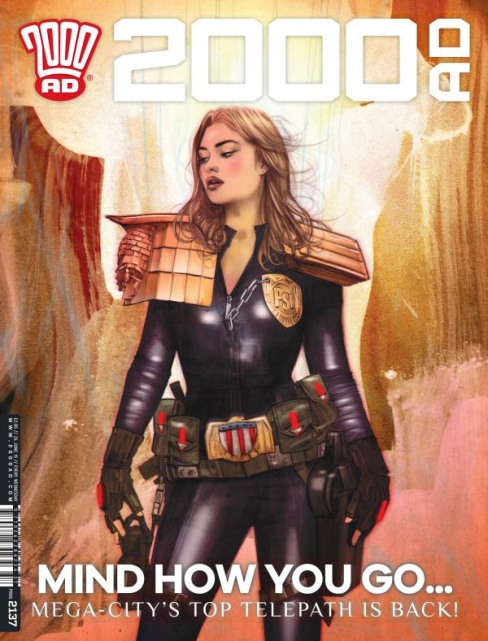 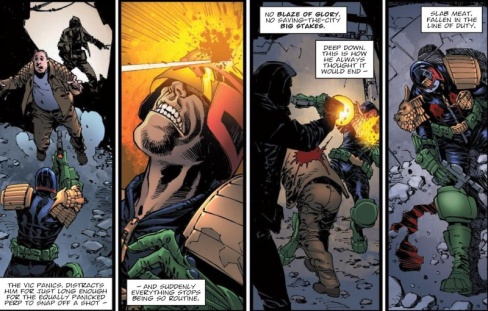 Matthew Blair: “The Samaritan Part 2” kicks off with a rare and wonderous sight that only comes around once in a generation: Judge Dredd without his helmet on! Granted, the top half of his face is covered in bandages so we still don’t get an idea of what his face looks like but still, it’s something.

In all seriousness, “The Samaritan” is shaping up to be an interesting, intriguing, and well told story. In part two of this little epic we see how Dredd wound up in the care of the psychic doctor known as the Samaritan and what his colleagues at the Hall of Justice are doing to find him.

The story brings back the same artistic team from the first part of ‘The Samaritan’ story line and everyone continues to produce high quality work. Writer Kenneth Niemand demonstrates a keen understanding of the random and violent nature of life in Mega City One along with developing a great internal conflict for the titular Samaritan. Does she risk her freedom to save a man who probably arrest her once he’s healed? But the highlight of this part of story is probably Judge Patsy, a highly intelligent robot Judge tasked with finding Dredd. Patsy proves to be incredibly capable and there’s even some space for a bit of humor and some musings on what opinions artificial life might form about regular organic flesh bags.

Staz Johnson’s art continues to be top notch and perfect for Judge Dredd stories. Mega City One continues to look like a messy, ugly, depressing sprawl filled with broken and desperate people while the panels used to show the Samaritan’s powers have a vague and hazy appearance that reinforces what the visions might feel like.

“The Samaritan Part 2” is a strong second entry in a long form story and sets up some interesting dilemmas and questions for the characters to face that will leave readers wanting more. Personally, I can’t wait to see what happens next. 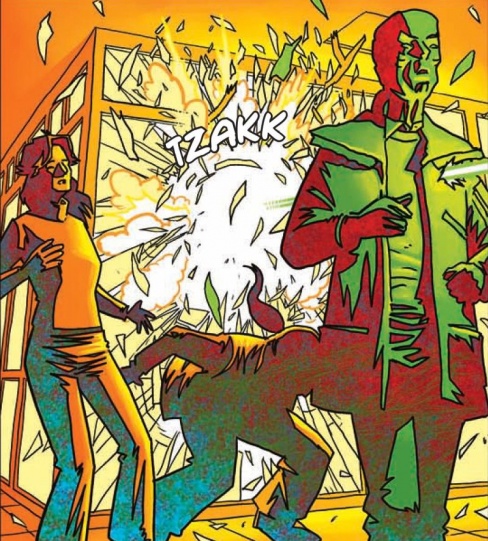 Michael Mazzacane: Some our Venusian husbands and Miss Alexnder are off on a mission to scrounge up supplies from her old job and have a nice chat about British politics. As always there is slight disconnect when it comes to knowing who the political parties are, but Edginton’s script does a fine job of explaining the point about the suburbs. Their population density is lesser compared to the cities, a status afforded to them by their wealth. As such the Martians haven’t bothered pillaging this place just yet.

This strip features a surprising and rare sight: sunlight. As such it causes some interesting tweaks to D’Israeli’s art. Normally it is filled in these deep tones, here things are washed out ever so slightly and the light cause a bit of a gradient to appear. It isn’t much but it’s a noticeable difference in the coloring. It doesn’t entirely work out, as he uses a shade of blue to represent the shadows cast from the tree that overwhelms everything. The Venusian’s being blue already compounds the muddiness on the opening page.

He does stick to his old tricks of showing action when a laser pistol goes off and everything is suddenly off color with a high contrast. The composition of the panel is actually pretty clever in how it hides who is shot. Our three characters form an arc around the center of the panel where the explosion is and De Ville adds an onomatopoeia on top of it for emphasis. The eye is immediately drawn to the center of the panel, for good reason that is where the explosion and action is. But drawing the eye in that way hides the fact someone got shot, a fact that is revealed quiet effectively in the following panels. That reveal and falling sequence is more effective because the reader doesn’t initially see it, but upon re inspection everything is clear and the creative team didn’t hide anything.

“Scarlet Traces” opens up a new front with some new tricks and potentially new enemies. 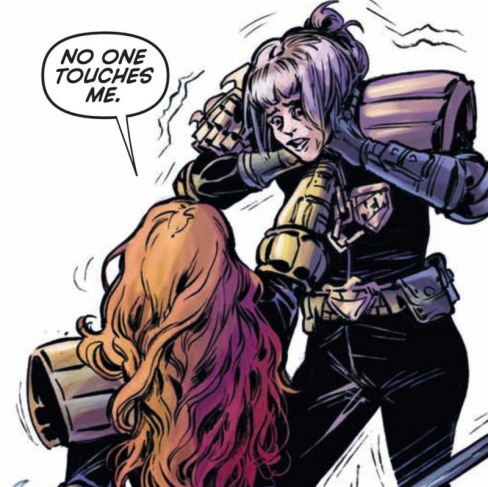 Greg Lincoln: Emma Beeby accomplishes several things all without resorting to clumsy exposition in the opening part to this Judge Anderson story. She does effectively introduce her players and the psycho drama that is playing out, but she more powerfully creates a palpable allegory to how the west reacts to people suffering trauma. Emma Beeby does an excellent job of showing differing reactions to mental health issues through people’s actions. Emma Beeby effectively shows multiple reactions to the perception of another’s mental health, from Dredd’s accusatory indifference to Anderson’s feelings and questioning her fitness to Anderson and Flowers’ familial concern and obvious empathy. Karyn’s surrender to evaluation in the story recognizes that people suffering from trauma often take the blame unto themselves, seeing themselves as broken, monsters and at fault for their own state. ‘Martyrs’ part one is a lot of set up that alludes to our inner demons and to how how other people either help or hinder us dealing with them.

Aneke and Barbara Noenzo’s pacing is well matched to the subtleties of Beeby’s storytelling. The art is aptly executed and really shines in its moments of either subtle understated feeling or its big visible outright bursts of exaggerated emotion. There is a lot of visual set up of the questions of wether it’s the real monsters in the world of our inner monsters that are more frightening. Compared to American comics it’s interesting that they use no special effect visual cues for psionic powers allowing the actual story to clue he reader in.

Gustavo S. Lodi: For the third time in a row, “Thistlebone” shows how its creative team nails the pacing around a horror story. For all the haunting reveals that are presented on this issue, there are new layers being introduced. Perhaps more importantly, those introductions are gradual, almost under the radar… so they can quickly get under the audience’s skin. The choices of imagery and dialogue are just realistic enough to keep readers guessing what is going on.

Visually, Simon Davis adds to that sense of the unreliable imagery. One can never tell what is truly happening, if pages and panels layouts are indeed melting or not, or if some of the appearances during the story are actually there or if they are the fruit of the lead character’s imagination. His brush strokes are fluid, not lingering on the pages for too long. Even the line work for the leads is intentionally loose, which makes facial expressions all the more important.

Plot wise, “Thistlebone” part 3 takes further steps in re-establishing the danger of the in-country cult to an actual presence. If past issues hinted that there was more beyond the surface, this third instalment brings the point further home, but without becoming overly obvious or apparent either. When these situations are at least shared by more than one character at a time, it becomes truly scary, as if the last vestiges of hope leave the story. For, if those events are really happening outside of the imagination… what else could be waiting on another turn of a page?

It is impressive how quickly have “Thistlebone” established its characters, plot, and visual flair. Similarly to another great contemporary horror story, that of “Gideon Falls,” “Thistlebone” grabs its audience and doesn’t let go. How long and how far those talons go… that is the real anticipation for future chapters.

Rowan Grover: Regardless of being a shorter installment this prog Rennie and Trevallion do not skimp on content. We get a vague hint at the forces that are in charge of Harry Absalom and his chums, though it’s mainly used to set up the fact that this time, the team are on their own and cut from outside support. From there on, we get roughly three to four different plot threads being played out on the space of four pages, which is just about as dense and confusing as it sounds. Tension is played on heavily here, with the first being our goggle-sporting ninja character planning to attack the supernatural creatures from afar, whilst the Cockney inspired him not to out of a sense of dread. We then see Terry and Jem, the more militaristic sci-fi-themed characters of the group get sidetracked by changeling creatures working for the Rathbornes, seeding a potential setup for both characters down the line, however, the fact that it happens to both of them feels like it cheapens the impact somewhat. The final page is a reminder that Absalom is back on his own with an unhinged doppelganger following him, although the nature of what seeks to oppose him is still unclear.

Trevallion still manages some good work here, though it’s less exciting and moodier than the last chapter. There’s a lot of focus still on nice blocky shading that gives a noir-esque atmosphere to the supernatural pulp happening all around them. The opening does this particularly well, as the last panel features a fun tilted scene of the twisted, steampunk Rathborn manor. The character work between Jem and Terry is very camp but a lot of fun to take in. When each reunites with their faux counterparts, it’s brilliantly cheesecakey, channeling lots of pulp sci-fi movies especially as Terry holds Jem in his arms, comforting her verbally in both scenes. When the changelings react to each other, it may feel a little on the nose, but it is a clear method of showing the reader what’s happening without relying on dialogue or narration.

“Absalom” feels like it’s getting a little crowded as it introduces multiple plot threads for each character, but still shows signs of narrative control, with some especially fun and tone-appropriate artwork.