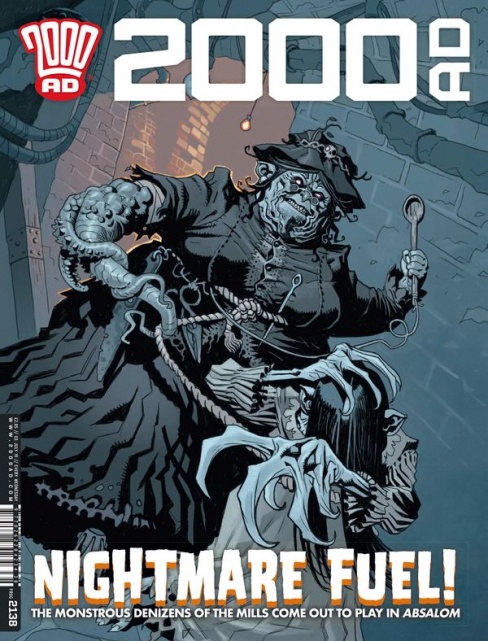 Matthew Blair: It’s the natural laws of kindness and compassion vs the literal letter of the law of Mega City One, who will win?

“The Samaritan Part 3” continues the story of the Samaritan, Judge Dredd, and the Judges tasked with finding him. It all continues to build towards a dramatic climax that I cannot wait to see.

Unlike the previous installment, this part of the story opens with Judge Wrex and the robot Judge Patsy in the middle of a firefight while they search for the missing Dredd. Human robot relations in the Judge Dredd universe have always been unique and interesting with the robots nearly on par with the humans in terms of wit and intelligence and this is no exception. Patsy is an interesting character and a good Judge, it’ll be interesting to see if he/it continues to have a presence in later stories.

Meanwhile, the tension between Dredd and the Samaritan continues to mount. Dredd’s defining characteristic is his absolute commitment to the law and his refusal to compromise, and this is the part of the story where that is on full display. Usually, Dredd’s stubbornness is touted as the thing that keeps him alive and sane, but it’s fascinating to see that stubbornness work against him and fight against the medicine that is trying to save his life.

The artwork continues to be perfect for a Judge Dredd story and the creative team deserves all the credit for not only telling a great long term story, but for making each section of the story fun and entertaining. Even if you aren’t a fan of the Judge Dredd comics, it’s still a great story that will entertain you and make you think.

Gustavo S. Lodi: The proverbial move of “out of the fire, and into the frying pan” seems to be in full effect during part four of “Thistlebone.” Avril and Seema (the past victim of a local cult and the reporter investigating it seeming resurgence) leave the haunting woods around Harrowvale and back into apparent normalcy, but the issues hints heavily that this is anything but safe.

This time around, “Thistlebone” lays back a bit in terms of the broader mysteries of the Jasper Hillman-led group of fanatics, to linger a bit more on the dialogue exchange between Avril and Seema. It is sharply written, with both characters behaving in a believable fashion, but still pushing the plot forward. There is also a lot of broader innuendo from the town folk, smaller conversations, that paint a wider canvas to the state of mind of the community. It feels organic and also like an investigation by the part of the audience.

Davis’s art finds ways to be out of the ordinary even during commonplace situations. For instance, to keep conveying a sense of strangeness on this chapter, Davis choose some specific decoration choices for the inn the leading pair is staying. It is so horrible (and I mean it in a complementary way) that it keeps the imagery consistent with past entries.

A slower chapter than the past three, “Thistlebone” nonetheless delivers on strong character bits, supported by compelling dialogue and a coherent visual narrative to the overall story. 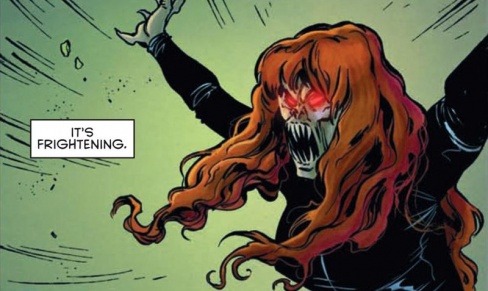 Greg Lincoln: ‘Martyrs part two’ is very much the middle part if a story but manages to to be entertaining despite just moving the players around. Emma Beeby gives us a bit of action, an extended chase and enough questions as to what is happening to keep us engaged. The beast that attacked the ‘kook’ cube transport last week apparently was there for Karyn, despite Anderson’s voiced belief that it wasn’t. We’re left with big questions as to who is behind the “monster” that appeared and what the may have in store for Karyn/Cassandra and thankfully it’s enough to make us curious to come back for the continuation next week.

Aneke and Barbara Noenzo created some pretty descent pages for this part. Their art make the the chase scene a bit of comedy, if a dark one, given the monster had to carry Karyn away in its mouth and the way they did it was somehow amusing. A lot of the art is strong solid comics art but it really shines in those labels that they spent time crafting Judge Anderson’s face and expressions. They created a great sense of place with their backgrounds. The chance scene was very well paced and Aneke chose effective angles to give it a sense of motion. 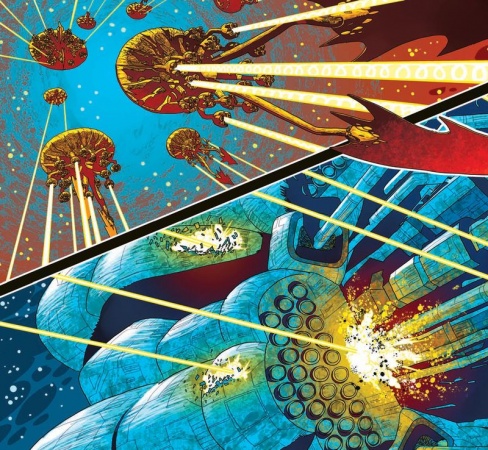 Michael Mazzacane: The twelfth and final entry in “Scarlet Traces: Home Front” doesn’t do much. It does something very big, but not much else. Edginton and D’Israeli tie most of our disparate plot threads together through the special broadcast that was teased a couple of weeks ago and a rather nice splash page. This is more a plot transition strip than a economical storytelling one.

Tying this strip, both in the macro and micro sense, is an intermittent broadcast. Originally I thought it was from our guys on the moon of several weeks ago, the exclamation that “he,” Ahron Shakespeare, is blue seemed more like a reference to the broadcast than him actually having blue skin. Nope, he is a Venusian and appears to be related our trio of husbands. I’m not sure if he’s a returning character from earlier “Scarlet Traces” runs, but Edginton has done enough work with the Husbands that Pitu’s tearful reaction was effective no matter what.

D’Israeli goes BIG this issue a beautiful splash page. You don’t see those much in a Prog for good reason, they eat up too much page budget. The space action sequences haven’t been the most effective ones in this strip. That is not the case with this splash page, it is big and bold and all the things you would want in a splash page that proclaims look to the skies the cavalry is coming.

“Scarlet Traces” goes big this strip and doesn’t have room for much else, but how it uses that size to tie everything its been building for the past three months together and set it up to enter a new phase in “Scarlet Traces: Storm Front.” 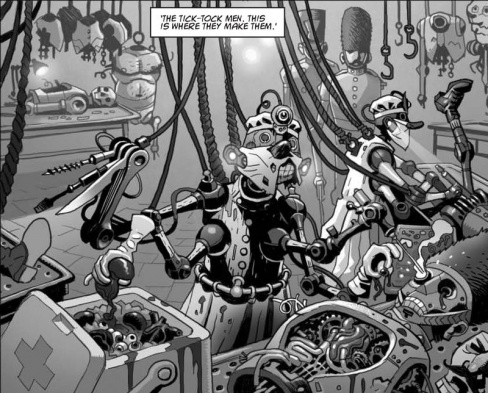 Rowan Grover: Part three of the story is more cohesive and enjoyable as it chooses to focus on only one of the disparate plot threads from the last prog. Rennie has all sorts of fun in this issue with action and character work. The ninja in this scene is more of a clear cut heroic protagonist, being headstrong and leaping fists-first (or swords) into situations but doing so with noble intentions. The cockney muscle of the group gets significantly more fleshed out in this prog too. Rennie keeps up the scoffing and sarcastic dialogue that makes this character so charming but reveals a darker layer here as we see him fantasize about attacking the ninja for undermining his authority and trusting Harry Absalom more. He doesn’t act on it, however, which is Rennie showing us that this character could have a hidden agenda. The action is used as some solid worldbuilding too, as we find out that the creepy Tick Tock Men are made of human, and frequently, children’s organs and body parts. It’s creepy in the most suitable way, fleshing out the denizens of Rathborne manor and giving the heroes a drive to attack.

Trevallion stretches his design legs in this issue, experimenting with all sorts of creepy characters and monsters. The so-called ‘special job’ that we see in the start is a combination of uncomfortable Lovecraftian design and angular, Japanese influenced horror (think “Uzumaku” or “Parasyte”). Then we get the Tick Tock Men workshop, which feels like a twisted puppet theatre with some robotic surgery thrown in, showing how much fun Trevallion is having with these bizarre horror concepts. The action as always is fast and lightweight. Trevallion has the cockney and the ninja swing into the fray, slicing and bashing with no effort at all. It makes for a breezy, fast-paced read but admittedly takes away impact from what should have been the pair making weighty, satisfying blows.

“Terminal Diagnosis” feels like it’s starting to embrace its weird concept and have a bit more fun, which I’m all for. This is a book that balances horror, crazy action, and weird science fiction to great effect.