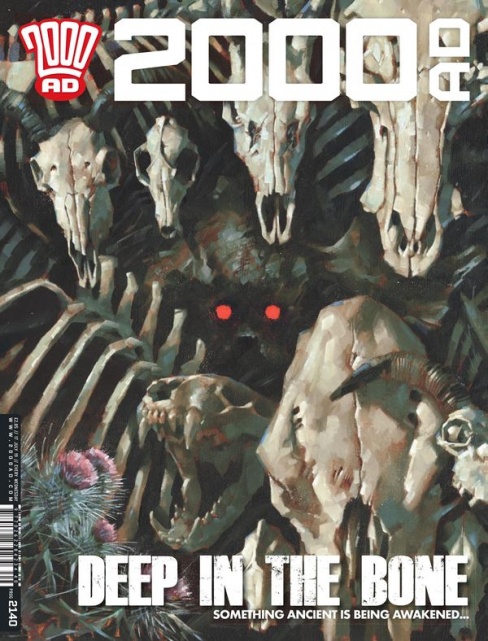 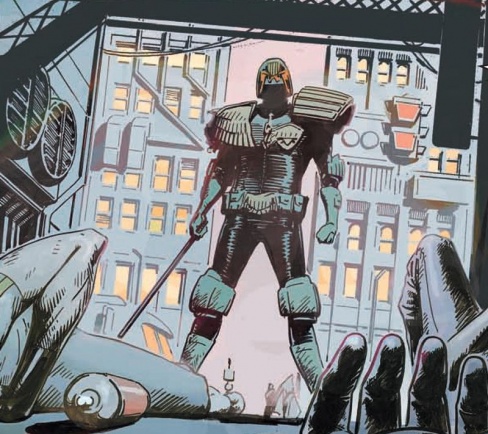 The story follows a pair of human citizens named Mackerel and Petrol (because of course they are) who see themselves as alien rights activists and have just freed a telepathic alien named Claudius from the clutches of the evil government. However, things aren’t always as they seem and Judge Dredd manages to burst in and teach the would be liberators that poking their noses in other people’s business can be fatal. Long standing Dredd writer Rory McConville delivers a fun and kind of silly Dredd story that puts the insanity of the world on full display, along with a darkly funny twist ending.

The artwork has a deliciously retro vibe to it and artist Tom Foster has a hyper realistic style that evokes artists like ‘Watchman’ illustrator David Gibbons or ‘The Metabarons’ Juan Gimenez. It’s a very well-drawn comic and Tom Foster deserves all of the praise and attention he can handle. Also, the artwork shares in the story’s irony with the so called liberators wearing the tackiest fake fur anyone has ever seen, which is one of the details that makes this story so much fun.

“Liberators” is a fast paced and quirky story that serves as a great palate cleanser for readers after the longer and more depressing ‘Samaritan’ story. It has great action, a great plot twist, and some of the best artwork that the Judge Dredd progs have ever seen.

Michael Mazzacane: The odd pacing from the previous strip is mostly gone as Kek-W and Lee Carter do a good job of using the compressed page count of a prog strip to jump around to several locations at the turn of the page and end on a classic cliffhanger. I’m fairly certain the cast will be able to pull themselves back up, but the sound structure of everything makes it enjoyable.

The previous simmering hatred amongst the crew comes to a head as Danny and Unther begin to have it out at the worst possible time. Meanwhile the Jerry Foundation beams into save the day. These two threads make for a nice balance as the cast just bounces off one another with some biting jabs. Also the HQ is still on fire.

Lee Carter’s art when Clive and Dwayne freeze up is wonderfully effective. The moment Clive ices over is both sudden and violent but clearly building if you look for it. With Ellie De Ville’s lettering your eye is drawn to the upper portion of the panels. You notice him checking his watch and wondering why it’s all going wrong. You don’t notice the slowly creeping ice until the final panel when he is fully incased in what feels like a sudden burst of action.

Things aren’t going much better at the HQ med bay as the bulk heads begin to rupture. That moment of rupture is beautifully realized in Carter’s art, who makes the page a mirror. The use of the mirror layout is both aesthetically pleasing and a good bit of craft given the content of the panels and how that informs the reading line and everything.

The second part of ‘The Fall of House of Vista’ is a far more effective strip compared to the previous one. 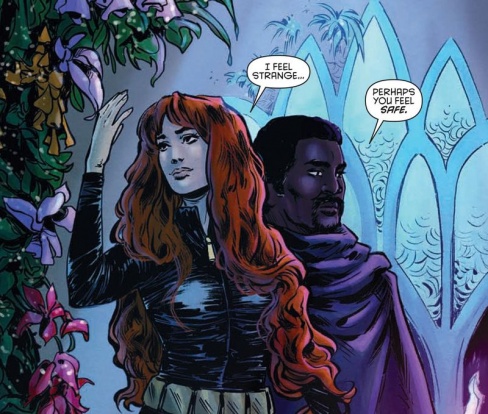 Greg Lincoln: Emma Beeby’s storytelling, though clear with recognizable story beats, it dies requires a jumps or two in logic to fully get this chapter. She establishes a couple things pretty solidly as this part unfolds, the head of Psi Division wants this trouble over ASAP regardless of the collateral outcome and she makes clear ties to one of the bigger events in Judge Dredd history. In fact but Anderson’s reactions it’s likely she thinks that is a preferable situation in the eyes of her superiors. Beeby respects her readers enough to exorcise that we can make the leaps in logic to follow the discussion between Flowers and Anderson as he figures out her plan. It’s clever storytelling, but beyond these story beats we have few clues as to where this is all heading. It’s clear though that Judge Anderson is still willing to risk herself to try to save everyone even when her superiors don’t care and the victims themselves they might not want her help.

The art and coloring is competent, but except for a few moments little stands out. A couple scenes do hit higher then the rest of this story. Aneke and Barbara Nosenzo created a eye-catching two page spread showing Karyn and her guide in a lot of shadows lit by violet highlights that stands out. The other scene that really hits home though is the one showing Anderson from above surrounded by the distinctive Ghostbuster Dog like shadows. It’s powerfully creepy even if the panels around it are just strongly workman like. 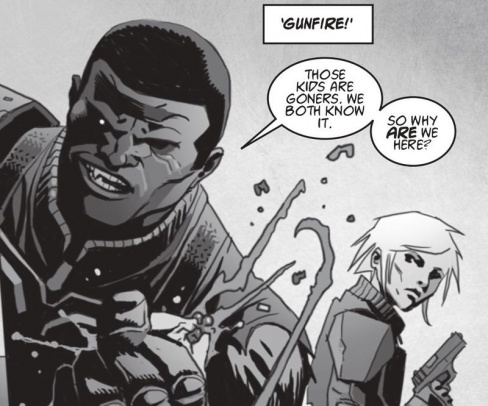 Rowan Grover: Rennie takes a look back at Jem and Terry’s plotline with part five. The evil doppelgangers are well and truly making their presence known, and Rennie uses this to make a intricate, churning narrative. We see both characters following their fake partners in different scenes playing out next to each other, and though it can be a little tricky to follow at times, it’s interesting to see how the doppelgangers represent each character’s fear of what the other thinks of them. Rennie makes it compelling to the point where at times, as silver-age-villain cheesy as the dialogue is, it can be hard to tell the difference between what’s real and what’s not, and that makes for a powerful examination of each character. The ending is a twist that feels very classically “Future Shocks”-esque and will leave readers questioning the future for this couple.

Trevallion does some great things with art here. The panel structure is really well thought out, with each page looking like a smashed glass with each panel looking like a misplaced shard. We follow the narrative of one scene directly downwards while the corresponding scene takes place directly across, but then on the page turns, Trevallion keeps readers on their toes by switching the sides that each scene takes place on (or do they? Just part of the fun of the narrative!). Then there are more subtle approaches to distinguishing the scenes, like the use of body language and facial dynamics. In the bottom of the second page, we see both the fake and real Jem in panels side by side, and while both are essentially responding to the same questions, one is facing down with determination, whilst the other has a more laid back, aloof and unhinged feel to her body language.

“Terminal Diagnosis” continues to be a great look into the psyches of each of these characters, and the latest look at Jem and Terry’s relationship is a lot of creepy fun. It requires your full attention and can be a little tough to follow, but rewards the work readers put in.

Gustavo S. Lodi: As with past chapters, “Thistlebone” is a great example of script and art walking hand-on-hand to deliver a specific experience. This time around, this translate into some truly imaginative page and panel design, with objects becoming the frame itself, woods fading into pages, and other similar effects. It shows a level of attention, of planning even, going to each of these displays.

The creative team also plays with colors, either making characters inherently similar and adding to their mystique, or by using color cues to tie with specific lines of dialogue.

This chapter of “Thistlebone” also moves the plot forward much more than the previous two entries, with a bit more of clarity is provided by the current and past states of Harrowvale, and how some of those territorial scarring are affecting innocent bystanders today. Despite of this evolution, the experience of the main characters is still removed from this action, as they remain unaware of the ramping tension around them. It adds to the general feeling of uneasiness that permeates the entire narrative so far.

At the end of the day, “Thistlebone” is an extremely well-crafted terror story, one that makes its audience uncomfortable not by what it is showing, but what it hints at, and by the disturbing real-world connections it suggests. Beautifully rendered and with a sharp alignment of script and art.