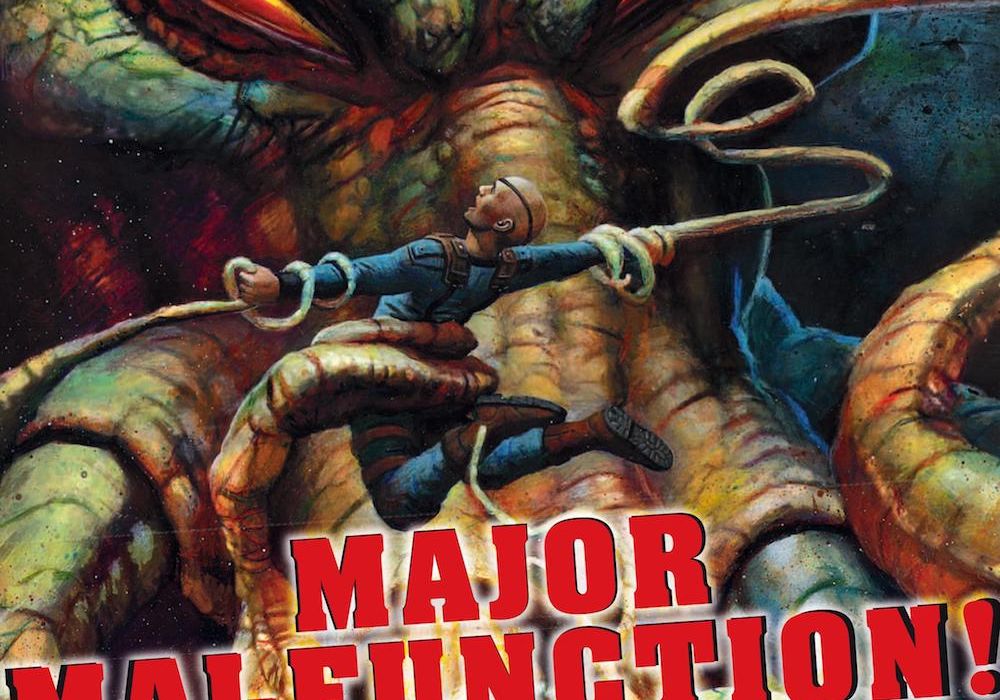 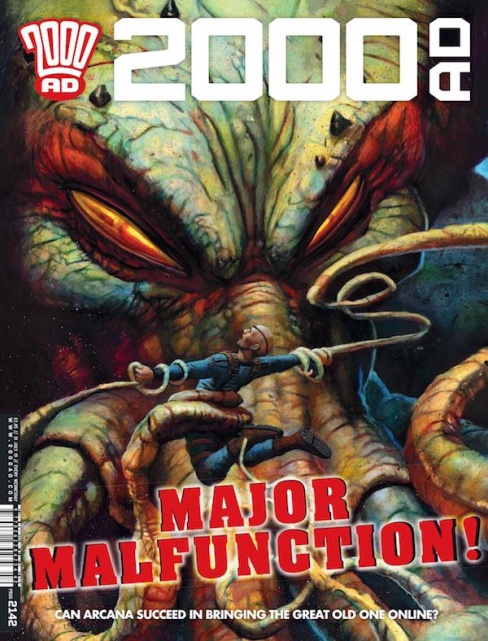 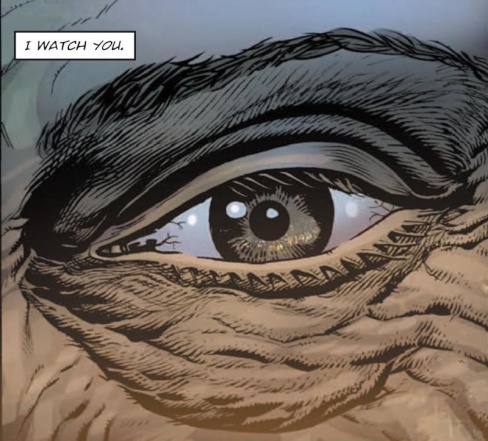 Matthew Blair: One of the biggest defining features of Judge Dredd as a character is stubbornness and absolute commitment to the law. Now, we get to see the endurance and force of will that has served Dredd so well turned against him by someone who is just as capable, and just as deadly, as him.

In “Control: Part 2” we see Judge Pin vowing to bring Dredd down for his perceived arrogance and disdain for the law. Meanwhile, Dredd finds himself isolated and shunned by the other Judges after he took the law into his own hands and executed Judge Smiley, the Judge who ran an incredibly powerful black ops division. All this culminates in a showdown with Judge Pin, who despite her age and apparent frailty, is able to give Dredd the fight of his life.

The story continues to be top notch as writer Rob Williams uses Judge Pin to show the darker side of Dredd’s fanatic obsession with maintaining law and order, while emphasizing the loneliness and isolation of Dredd after he took the law into his own hands. The story moves at a good pace and without spoiling anything, the first showdown between Pin and Dredd has a great twist that is set up brilliantly from page one.

The artwork continues to impress as artist Chris Weston showcases the dirty, gritty, and wholly unpleasant reality that is Mega City One. Everything looks worn down and the use of many small panels containing mid shots and extreme close ups of the characters give the story a claustrophobic and oppressive feel. The highlight of the story is the final fight scene, which takes place in a dark, decrepit, and dirty portion of the city that has been forgotten by everyone except the rats.

“Control: Part 2” is a harsh and ugly story that has a sort of perverse beauty that is fascinating to read and look at. It’s a desperate fight for survival that is pushing Dredd to his absolute limit, and it will be interesting to see how he manages to survive. 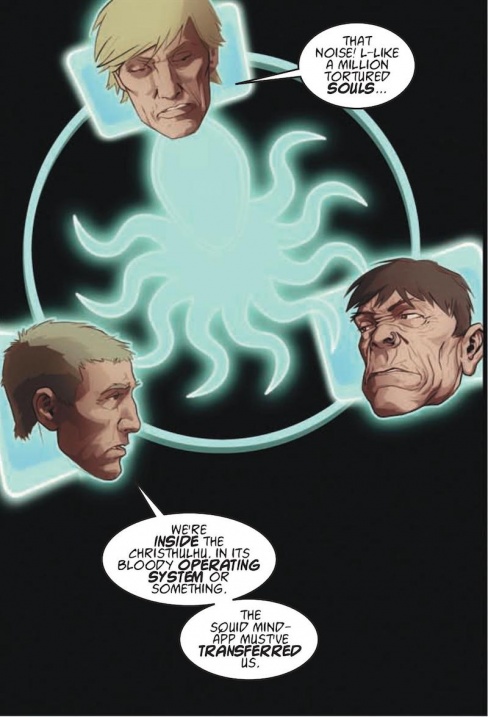 Michael Mazzacane: Things are starting to come together and make a bit more sense for the remaining cast of “Indigo Prime.” The ship is, or was, on fire and blown up, but Danny’s starting to have a breakthrough as the Christhulhu. So progress. A more straightforward strip also means moments of absurd humor manage to land as Arcana fights his least favorite kind of scumbag, Limey Nazis! After several strips of setting things up ‘Fall of the House of Vista’ seems to be on track for something.

Danny, Unthur, and James realize they’ve been pulled into the Christulhu operating system itself. Which inevitably brings on some dreadful existential questions about existence that actually get brushed aside fairly quickly due to page space and the nature of being members of Indigo Prime. Even if Kek-W and Lee Carter don’t revel in it very much there is a real profound sense of sadness the creative team create within Danny as that existential dread and Indigo Prime collide and he’s just left wondering why he never wakes up in a world where something nice happened.

Meanwhile The Baron, CEO of Lanzer Group, and his army are on their tale in pursuit of pretty much everything they have. This strip makes use of the contrast between the trio of floating heads inside Christhulhu and the bodies outside of it. As the Lanzer Group attacks their pages are fairly normal in their design, it’s a bunch of anonymous gunmen attacking a giant Cthulhu monster. In the limitless space of the operating system pages are more open. The page where Danny takes over the Christhulhu is the opposite of that as Danny reaches out into the multiverse and touches all these minds and takes control. Carter gives the page this rippled effect that offsets all the images and it’s centered around Danny’s head. It is this really delightful bit of page design that tells you everything you need to know visually with Kek-W scripting giving you some grittier detail.

Things seem to be turning around for “Indigo Prime” both the cast and the strip with 5 pages of progress. After several strips of going back and forth on matters the crew seems to have found their bearings inside the monstrous body of Christhulhu with Danny at the helm. Maybe Arcana isn’t all that bad after all. 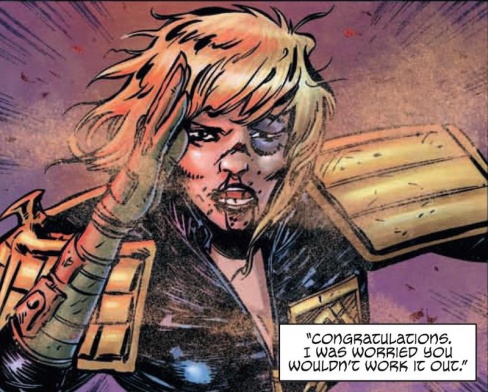 Greg Lincoln: Emma Beeby seeded the story with just enough clues that maybe you could have figured out that Theo was much more then he seemed. The plot points she revealed when Karyn got the truth out of the “Lotus” entity made all the disparate odd details of the the sanctuary make sense. Turns out that it all does goes back to Chaos Day when the “creatures first appeared and why they are an combination of saving angel, monster, and lawgiver bullet proof. This ship also revealed a truism about living in a world with psionic or magical powers around, perhaps you would always doubt what you see hear and feel as Anderson states. Even those who manipulate others with their own minds are susceptible to falling pretty to illusions especially if it gives them something they crave like apparent freedom and security in the face of some other great horror. ‘Martyrs Pt 6’ is a solid delivery in the secrets hinted at in the final panel of last week’s issue, and it’s one that creates both a sympathetic “villain” in Theo. It’s very easy to believe that a compassionate Judge might have done those things to keep people safe in the face of the horrors unleashed during “Chaos Day” We’re only left wondering if Anderson will recall the obviously very powerful illusionist Judge when she finally meets him, that is if Karyn/Cassandra doesn’t finish him off first.

Aneke and Barbara Nosenzo’s pages for this week support the revelations in this story quite well. Those few panels showing the refugees that Theo saved on “Choas Day” though simple are pretty haunting in effect. Some of the colors by Nosenzo though does obscure the art that Aneke created, some of her shadows and rendering are just too dark and a little muddy. Their final pages showing Anderson “freeing” herself from the initial illusion are brilliantly colored and show the joy and relief on her face quite clearly. It’s an odd juxtaposition that sets the scene quite well, the rainbow like effect of her “escape” and the bare grey “rockrete” she is surrounded by. 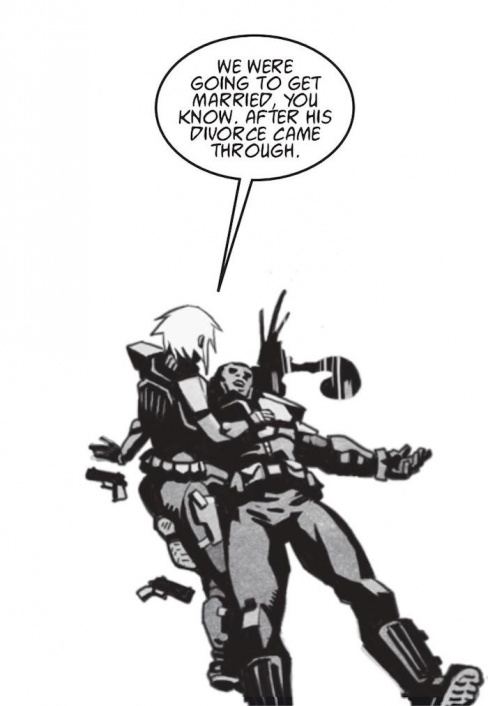 Rowan Grover: “Absalom” starts to tie together it’s disparate plot threads in part seven. Jem is left alone as Terry was killed by the evil doppelganger, and Rennie has her reflecting and lamenting on her situation and the group’s as a whole, which does a great job of reminding readers of human past of her character whilst showing the stakes of each of them coming here. Rennie then casts a very sinister overtone for the rest of the prog, as Dolly speaks to Jem through the possession of a dead body. Her deliberately Victorian speech patterns give the whole sequence an unsettling tone, while the language itself feels cryptic and vague enough to hold an air of mystery. Rennie then gets the ninja and Jem to meet up finally, and the confrontation feels like a natural culmination of the prior events, almost like the final boss area of a Resident Evil video game. The stage is set for one final confrontation and Rennie has set the table super well.

As per usual, Trevallion does great work with some gruesome monster-fighting action, but what I love is that the prog actually opens on a quiet scene of Jem lamenting alone over Terry’s dead body. It’s emotional, especially as we see tears stream down Jem’s relatively placid face. The narrative jumps to the ninja’s scenario, which is fraught with some particularly horrible beasties that contain one of my pet-fears: loads and loads of teeth in the wrong places. That’s not even the most unnerving thing in this story, however. I love just as much as I’m creeped out by Trevallion’s attention to detail when rendering Dolly picking up the sent of attackers. We really get this sense that the dead body has a bestial aspect as it pauses for a panel, seeming to sniff the air, before telling Jem that it has to go, and leaving the dead body unpossessed to slump down inhumanly. It’s great attention to choreography and detail that impressed me just as much as it frightens me.

“Terminal Diagnosis” is winding towards a conclusion, and Rennie makes the tying of plot threads feel natural and well-paced. The art is still wild and terrifying in the right places, making this one of 2000AD’s creepier books at the moment. 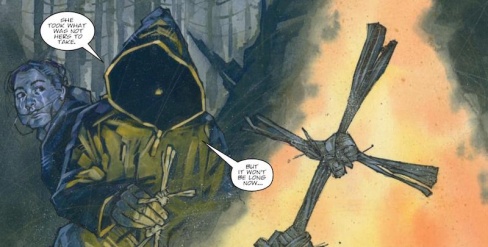 Gustavo S. Lodi: After the somewhat lukewarm seventh chapter last week, “Thistlebone” is back to full sharp. This entry is some of the series’s strongest, with protagonists taking surprising turns on their respective arc, hinting at broader plot moments further down the road.

Over at the art department, “Thistlebone” remains consistently moody and haunting. The style lends itself very nicely to the questioning of reality, of what is actually happening versus dreams and hallucinations. This mood is perceived on panel transitions, colouring similarities across characters, and even shifting backgrounds.

The story is the main highlight of “Thistlebone” on chapter eight. What was perceived so far as an investigation of past events becomes a deeper exploration of insanity and a play on the unreliable narrator trope. It is a welcomed added dimension to the entire series, and one that opens up venues on how it can progress. To be honest, it adds a needed variety to how the culmination of “Thistlebone” may be, that was missing so far in what seemed to a natural progression to and ending its audience might have seen a few times already.

As it continues with its beautiful art, but takes a good measure of risk of what it actually sets out to do, “Thistlebone” pleases once again. 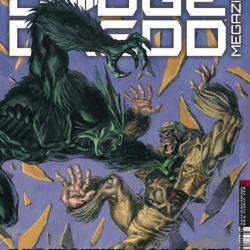 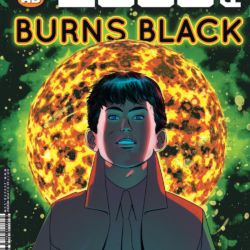 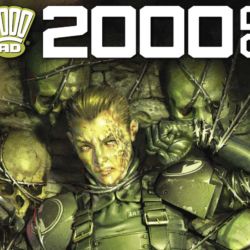