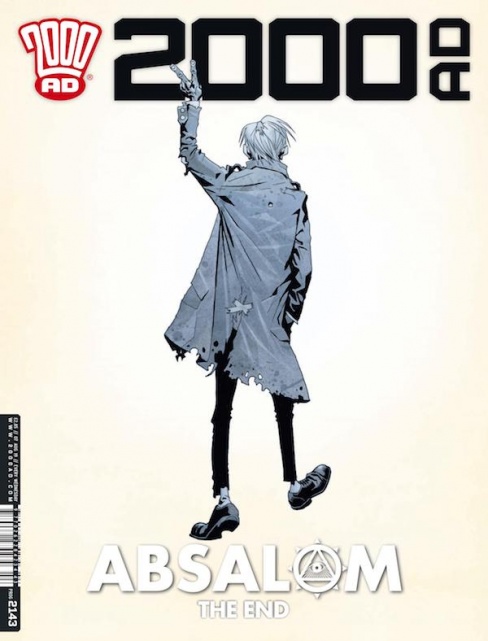 Matthew Blair: This is it. This is where we find out why Judge Pin has decided to start killing her colleagues and has target Dredd for termination. This is the origin of her madness.

Spoilers for the Dredd story “Day of Chaos” ahead

From July 2011 to June 2012, the progs published a massive Dredd story called “Day of Chaos”, where a viral super weapon known as the ‘Chaos Bug’ wiped out over 87 percent of Mega City One and crippled the Justice Department. It was a massive story line that forever altered the status quo of the comic.

“Control: Part 3” gives us a flash back of Judge Pin and her colleague Judge Mason standing outside the city, next to the mass graves where the city is dumping the dead bodies from the aftermath of Chaos Day. It’s an overwhelming sight and leads Pin and Mason to start…hearing things that wind up driving both of them mad.

While the creative team on this story has always been brilliant, this story takes their skill and talents to a whole other level. Writer Rob Williams shows a chilling, and almost Lovecraftian, descent into cold and calculated insanity that is both terrifying and tragic. It’s enough to make me declare that Judge Pin is one of the greatest villains in Judge Dredd history.

But the best part of this story is the artwork. The flash back scene is presented in stark and simple black and white, with a little Frank Miller-esque splash of red blood. It’s a brilliant choice that somehow makes Chris Weston’s art look even better. The highlight of the story are the literal mountains of corpses that are being dumped into mass graves. The level of detail is astounding and gives the whole thing a sense of massive scope and scale.

What else is there to say about this story that hasn’t already been said? This is a fantastic story with amazing artwork that deserves all of the praise and attention that can possibly be thrown at it. Go read it now!

Michael Mazzacane: If the previous strip felt like five pages of moving forward, the fifth part of ‘Fall of the House of Vista’ keeps that momentum in a much simpler way. As Christhulhu throws down with a variety of grotesque reimagining of various kaiju on the twisted Jekyll Island. Where the previous strip was this contrast between the inner self and the exterior, this one is fairly simple monster mash.

The concept of this strip is something I love, who dosen’t enjoy a giant monster fight? It just runs into the limitations of being presented within the pages of “2000 AD.” Five pages isn’t a lot of space to show an epic monster bash. Lee Carter’s art in this strip is technically fine, there is something right and creepy about how smooth and unnatural their coloring textures all the creatures. It just lacks the page space to really go big and land those moments. Fight choreography isn’t hard to follow, there’s a fair bit of the Christhulhu being beaten down, it just dosen’t flow very well as action. The pace moves a bit to quick one second they’re fighting the crustacean kaiju and the next it’s Mecha-Tumor Zero. The final page of the strip features the best use of scale, Carter uses a full page vertical panel to draw a full body Christhulu with this little base thrown in for scale. The use of scale carries through the rest of the page as the beleaguered remains of Indigo Prime chase after the Lanzer Group and we get our cliffhanger.

This was another solid strip of progression, it feels like something is happening now. It made the best of its limited page budget, highlighting relevant action when it could and giving us a final page that made great use of scale.

Greg Lincoln: ‘Martyrs’ presents us with a couple of new story elements that try to expand our perception of the overall story the flash back to Psi Judge Theo’s past and his apparent juvenile infraction does adds little overall and is a little confusingly told. The other bits manage to expand our perception of Karyn and what Theo says to her really reveals a lot about her nature. He’s bringing her in to “replace” him as the protector of this paradise. He noted that though she sees herself a monster her demon only comes out to protect the people around her. In truth she was only failing whe it came to rousing the Cassandra to cause harm. It’s makes Karyn a good parallel to Anderson who was a threat in the past due to the Dark Judges. She additionally proves this protecting Anderson from the soldiers Theo has there to keep the Judges out. A good development overall but it was with a little too much theatrics and complication.

Visually there is a lot packed into these pages. Aneke has to establish the presence of Theo’s conventional back up, they also have to show the threat posed to Paradise by the arriving Judges and present two flashbacks and some illusory projections. It’s all a bit too much and the art feels a little confused and rushed. It’s not bad at all it’s just too much for the pages here. Simon Bowland did a good job of including all the dialogue as there was a lot of it this time around. They are still telling the story well, it’s just getting lost in a bit of extraneous details.

Gustavo S. Lodi: There are times on a serialised story where readers reach that moment prior to the full-blown climax, when everything seems to stand still as the eruption of all plot elements come together. When timed correctly, at the cliffhanger of a narrative, it can reach a powerful crescendo.

Such is the work of “Thistlebone” on its ninth chapter, timed perfectly, paced even better, and providing a very satisfying moment for one of the series’s protagonist.

Over at the art department, Davis is channeling his best Bill Sienkiewicz and making it his own. There is a particular sequence towards the middle of this chapter that is a great callback to the seminal ‘Demon Bear’ story over at Marvel’s “New Mutants” of the eighties. That eery sensibility, the masterful use of deformed figures to denote the grotesque and otherworldly.

The entire piece reads like something that is heading to conclusion, from the way the story unravel at a faster pace than preceding chapters, from how certain characters reveal their true intentions, and overall mysteries are cast into light, if albeit partially.

But it will not go without a bang. The next chapters of “Thistlebone” promise a confrontation decades in the making, and if the art style continues to keep pace, it is poised to be truly remarkable. 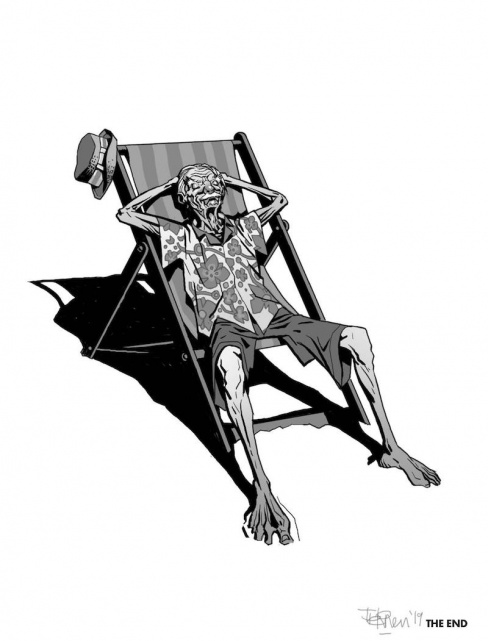 Rowan Grover: The “Absalom” story comes to a close in part eight of ‘Terminal Diagnosis’. Rennie converges the plot narratives nicely, having the cockney double agent Geoffrey reveal himself as the mastermind behind the Rathborne manor events. There’s some ambiguity around Harry’s tormenting doppelganger, however, as he seems to work as something of a hallucination in this prog, which feels like a letdown given the amount of development he received in the last few issues. On top of that, none of the secondary characters like Jem or the ninja get as much closure or development by the end of this chapter, which feels a little disheartening. (SPOILERS AHEAD) What Rennie does ramp up nicely is Harry’s departure, which is suitable heartwrenching and nicely paced. Elderly people passing away in fiction is a real sensitive spot for me, and Rennie having Harry apologize for Jem’s loss and talk about his grandkids is devastating, while the final page is a beautiful sendoff for our protagonist.

Trevallion gets a notably quieter shot this issue, proving that his talent doesn’t merely lie in high-intensity action. The opening shot has some great character acting, with the Caballistics leader having a blank yet somehow quietly sarcastic expression as she discusses outdated laws. Having her delightfully mustached assistant chortle beside her is brilliant, too. That aside, the one piece of action I want to bring up is the single hit that Geoffrey deals Harry because it is brutally set to remind us that Harry, battle-ready though he may be, is still a senior citizen and notably fragile because of this. (SPOILERS AGAIN) Trevallion deals with some great dying close-ups in the waning scenes, showing our beloved protagonist slowly get more tired and more resigned to his fate, stretching the moment out beautifully with a slow zoom-in to really wring the tears from our eyes.

Although not every thread is satisfyingly closed, ‘Terminal Diagnosis’ gives our protagonist some satisfying closure and is one of the more emotional progs you will read this week. Rennie and Trevallion prove that they are a creative force to be reckoned with.