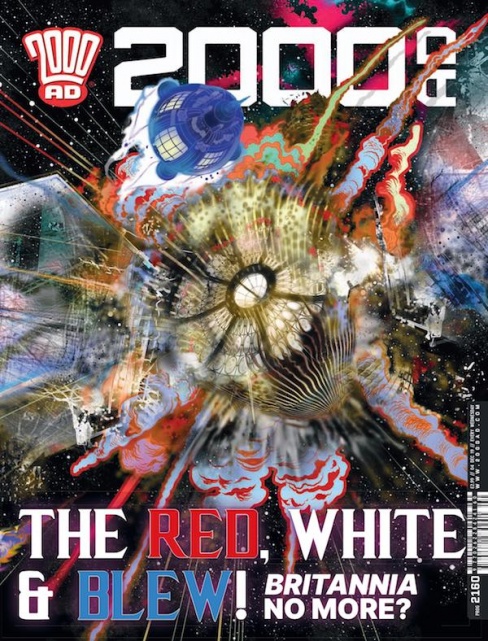 Greg Lincoln: ‘The Harvest Part 3’ solidly reveals the identity of the serial killer and it’s a surprise. Well, actually it likely should not have been a surprise as the clues were there all along but, somehow, it’s hard to suspect something that isn’t supported to have motives. The reveal that it was the medical robot shows that much like the Judges possibly we never would consider the “object” in the room to be capable of having a desire let alone a desire to kill. All in all this chapter delivers in ways it was hard to predict. It answered the question of the who but implied the bigger question of why. Michael Carroll also added some real interesting story to the Doctor he introduced last chapter, the justice department seems to owe her research and skills, and that of her medical droid, a lot. Depending on where this story goes from here it may turn out to be a very interesting case after all.

Nick Perceval’s art shines in this chapter with the closeups shots. The interrogation scene with the mutilated mugger and the interview with The eventually mutilated Doctor displayed his ability to create strong facial expressions. His most effective though was the silent hints that Dredd, well we can assume it was Dredd, planted the tracker on the Doctors arm. That scene alone told more story then many of the good action scenes that followed. It revealed something cold practical and calculating about the Judge. It’s clever but, as with the sometimes uncanny valley producing art, it makes us just a little too uncomfortable to be in on. 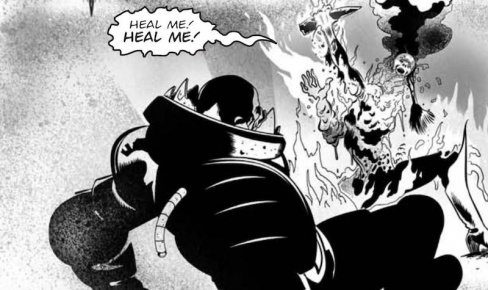 Michael Mazzacane: As the remaining crew of the scuttled Britannia hurtle towards Earth, I was struck by just how well done the eleventh part of ‘Divisor’ was. It has the leeway of an extra page, but that bit of real estate doesn’t invalidate the concise and well done storytelling across the strip. While some pages are a bit more packed than others each page is a mini-scene unto itself that flows into the next one. Earlier entries in the strip were less efficent in their storytelling leading to an odd sense of decompression for the normally tight Prog strip.

This sort of flow does not require a sort of strict construction of panels. Look at the first page from this strip, it has panels but lacks the strong coherence of a grid. Like Kearney, S.K. Moore’s art is melting away under the stress. The subject matter for that page, Kearney’s not so slow dissolution, would be complicated even in color. Through a smart use of spot blacks and textured bits of grey, Moore is able to build the page around the light-fire bursting through Kearney’s person and create a sense of coherence in the chaos. The reading line itself isn’t ultra-complicated but due to all the visual information it is one of the busier pages we’ve had recently.

Defoe as a character is a bit of a purposeful enigma, a mixture between Eisenhorn and Clint Eastwood, it gives the character a “cool” mystique in all the grit and satire the series roams around in. With Moore’s art in this strip the sadistic side of Defoe comes out, both in his gloating as Kearney melts away and in the later pages as he pokes the Monarchy bear with his populist positions.

Of course Irdonozur couldn’t be defeated that easily, once again reaching out through space to defeat the enemy. Mills does something I can’t quite decide is a smart move or poor one, by listing how impenetrable their cage is once again. In listing it all out the futility of scuttling the Britannia is immediately apparent and their present situation seems very bleak. At the same time it feels like it dramatically invalidates the previous couple of strips. The move of Irdonozur not being dead is a classic monster move and makes sense, but justifying it in this blatant way didn’t quite work for me.

They’re running out of ship so this run of the strip has to be ending soon, right? 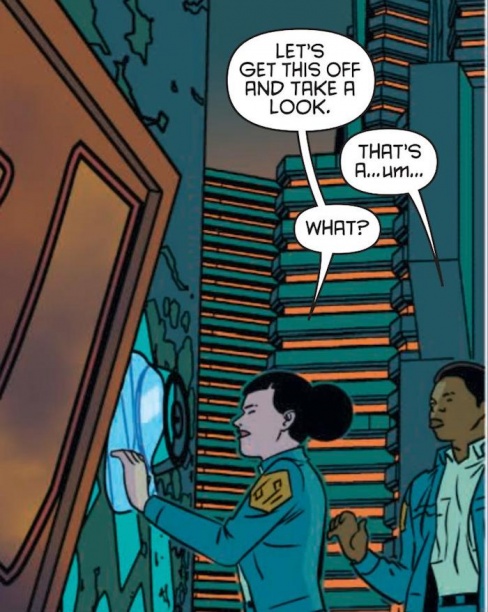 Rowan Grover: Things are moving for Bridget and her investigations in this chapter of “Hate Box”. I love that now with Weyowa in tow, we get to see a much more authoritative side of Bridget, yet she still has her empathetic human element whenever she accidentally overwhelms him. Weyowa too is an interesting character in his own right when he’s not serving as something of a punching bag for Bridget’s ideas. He’s great that no matter how bumbling he may seem, he’s still a complete pro when it comes to reporting information about his job. The usage of the Hate Box in this issue also feels satisfying because it’s something that has been built up quite naturally over the course of the story and yet still feels like an unexpected element.

Culbard’s art here is solid in how it renders the characters moving through one of the more interesting cityscapes of this series. The opening page establishes this well with lots of verticality to the structure, plus plenty of alien-looking graffiti to give the city a lived-in, authentic feel. Culbard also explores this same setting over a few shots on the next page and ensures that it still feels fresh by using different perspectives to show different aspects of the page. We then also move to some more exciting and interesting parts of the city that do a lot of good worldbuilding. I love the alley that is essentially a giant hotel that Weyowa and Bridget patrol through, and the apartment they stumble on is dirty and derelict, yet still manages to feel futuristic.

“Hate Box” is dialing up the plot twists and character work this prog, slowly yet naturally moving to a conclusion. I’m excited to see where the team goes with this book. 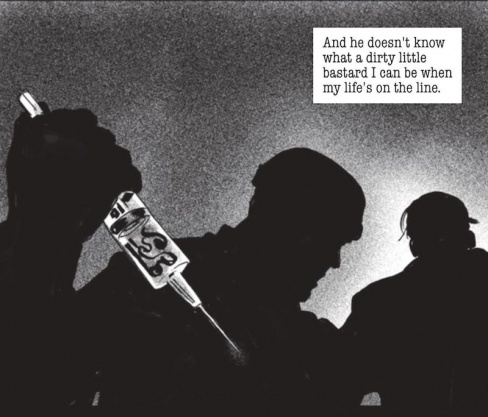 Gustavo S. Lodi: If the last chapter of “Hope” was a return to form, in the shape of an action-packed episode, this one continues on that strong trend, but chooses to do so on a tone significantly set in the horror genre, from imagery down to pacing.

The easy part first. Broxton’s art has always been a strong selling point for this series, and it does not disappoint on this episode. There are two particularly strong moments: one, earlier in the chapter, where panel transitions are aligned with the dimensional trips the characters are going through: borders bleed into one another, and the sense of movement is very fluid. The second, far more subdued, occurs on the very last page and will remain unspoiled, but it is a haunting, simple image. Well-framed, well designed.

Adams’s script doesn’t slow down, it simply changes lanes. While in past chapter the overall pacing was off, with chapters resolute on being filler, this one continues the confrontation established on the previous issue, but positions it as a game of cat and mouse, mixed with magic, war-time situations, and terror.

It works really well, shifting from action into horror, and ending on a cliffhanger that, while somewhat telegraphed a couple of issues back, is still very effective. Glad to be hooked again on this series, and anxious to what is coming next. 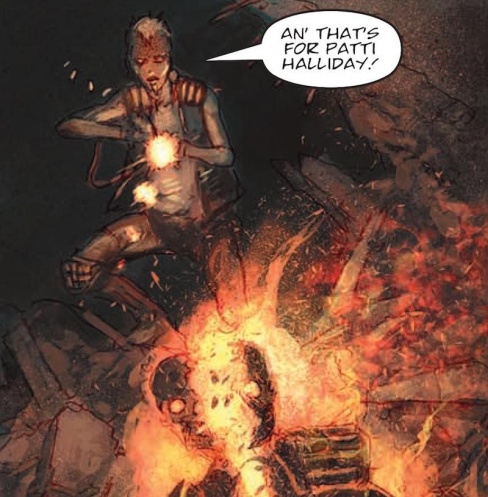 Matthew Blair: Part of what makes ‘The Fall of Deadworld: Doomed” so intriguing is the fact that we know the dead will win out in the end, but it’s interesting to see how long the living can survive and keep their hopes up. The past couple of instalments of this series have shown the living giving a good account of themselves, now it’s time for the dead to push back.

In “The Fall of Deadworld: Doomed Part 11” writer Kek-W shows a high and strung out Judge Casey Tweed wondering where everyone who was on his side went and how he managed to get so many enemies. His only companion is a talking spider skull who instructs him to think bigger. Things come to a literal head when one of the undead sisters inhabits a corpse and decides that Tweed isn’t a worthy leader for their cause. Unfortunately for her, Tweed’s mind does get expanded, and there is something big and nasty on the horizon.

The art of “The Fall of Deadworld: Doomed Part 11” lets Dave Kendall showcase a little bit of everything that has made his artwork great for this story. There’s a fun bit of action at the beginning with some terrifyingly bright flames, there’s some good character development moments, and the weird and creepy imagery makes a roaring comeback with decapitated corpses, mind controlling parasites, and the hint of an entire universe of the dead just waiting to be unleashed and feast on the living.

“The Fall of Deadworld: Doomed Part 11” is another pivot point in the story. While the living characters have had a chance to fight back and make some progress, the readers all know that at the end of the day the dead will win so they can move on and give Judge Dredd a massive headache. The living have had their fun, now it’s time for the dead to rise.