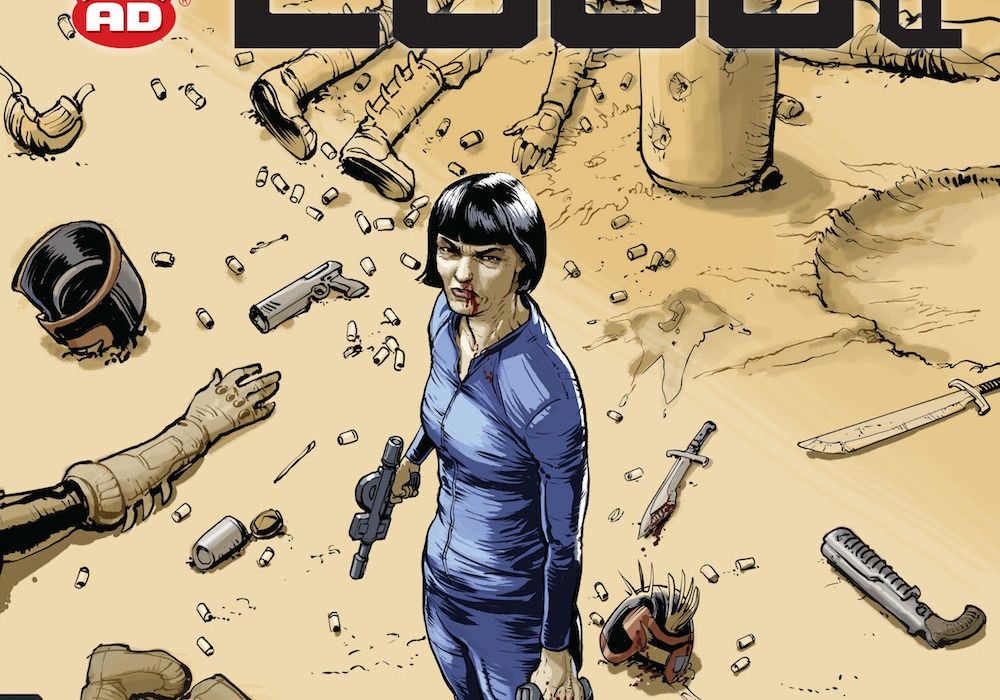 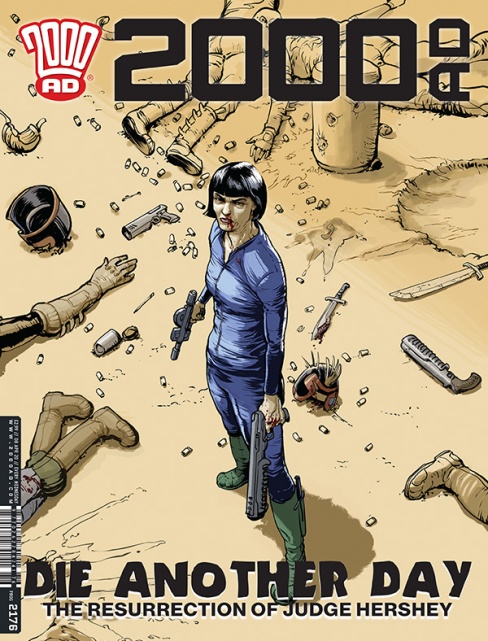 Michael Mazzacane: “Dredd” is currently in a more episodic mode as various creative teams come in and out on the weekly grind. These stories aren’t mega progs in terms of length and “lore” importance, but they help to remind everyone of the variety of stories that work in “Judge Dredd.” ‘The Bird Lady of Al Capone’ is a one shot, but the emotional crux of the 6 page story is rooted in ‘Day of Chaos’ from just about 8 years or 1000 progs ago. Mega-City One was a weird place before the Chaos Bug, in the after math it continues to be weird in new and surprising ways as the creative team tell the most upbeat, sentimental, “Dredd” story in recent history.

That feeling of sentimentality is derived from Barbara Nosenzo’s color palette. There is a surprising warmth to Nick Dyer’s line work, despite the heavy use of secondary colors that can often come off as garish. As Dredd and the titular Bird Lady stare out into Mega-City One the panels are awash in orange, purple, and turquoise. This palette manages to capture the feeling of staring at a beautiful sunset which is on its face ironic because both that sort of sentimentality feels antithetical to “Dredd” and when you consider the palette and the setting, dilapidated ruins of the City after the Chaos Bug, it feels improbable. That improbability and strangeness however is the central point of Niemand’s script, things change and life finds new waves to thrive that should be nurtured not destroyed because it is different or not what a fascist government decrees.

Nick Dyer’s line work has a cartooned flair to it that I can’t quite put my finger on. Their line work feels like it’s been blown up and enhanced without an in kind increase to the pixels. Lines seem just a bit too thick and unclean in spots, but it isn’t grainy. There is a sort of grittiness to the line work that feels off in the same way Nosenzo’s palette would often be considered off. Overall he makes some solid pages that are readable. His figure work does have a habit of posing Dredd in iconic strong poses that seem more deifying than ironic.

‘The Bird Lady of Al Capone’ is a nice one off “Dredd” strip that encourages readers to smell the roses and see how things change and stay the same. 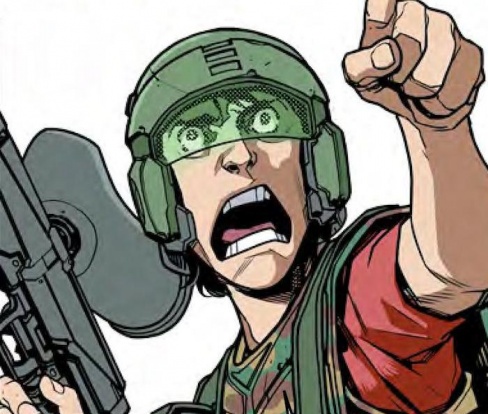 Gustavo S. Lodi: With it’s second chapter on ‘Crisis of Infinite Nerds,’ the story for “Survival Geeks” seems to show it was not much on top of a creative idea and interesting visuals. What was novelty on the first chapter – the combination of Kirby-influenced flair, and a sense of irony to the tropes of comics crossovers – is repeated on this second chapter.

Visually, “Survival Geeks” has plenty of personality. The action and brutal confrontation are very visceral, the characters are cartoony and yet distinct, and the plethora of nerd squads – with their iterations on infinite earths – are cleverly designed.

Plot-wise, it is still very unclear what is actually happening. Readers will understand there is a massive gambit and challenge across the multiverse, with the same group of people’s doppelgangers fighting for dominance… but that is it. Any ulterior motive for this to be happening, or to why those particular characters have skin on the game is to really introduced.

Perhaps, on their attempt to critique the medium and the nonsensical events that often plague it, “Survival Geeks” fell on a trap of that very old and leave far too much unanswered.

Brian Salvatore: A frequent criticism of comics is that they tell instead of show, using extraneous dialogue instead of using the visuals to tell a story in a more interesting way. ‘Nimrod’ is not verbose, and James Peaty is giving the reader plenty of opportunity to connect the dots on their own. Unfortunately, the dots are spaced pretty far apart. It seems like each installment of this strip is specifically intended to dole out one new piece of information, surrounded by setting a mood. This isn’t the worst way to build a story, but it makes each strip feel less complete, and more like a dangling piece of narrative.

This chapter tells us that the hive mind is nothing new to “Skip Tracer,” though Nimrod is its new name, as opposed to Legion. We are finally starting to get a sense for what Nimrod is, and yet, the threat still doesn’t seem as extreme as what the characters are presenting it as. Part of this is due to the storytelling device of wanting the cliffhanger to hinge on an expository line of dialogue, but part of that is also due to the fact that we’ve only seen Nimrod inconvenience individuals thus far, and not the larger scale destruction that is being teased here.

Paul Marshall drops in and out of different locales in this chapter, and it gives him a chance to do something a little less same-y panel to panel. It definitely gives Dylan Teague a chance to use the lighter, more natural colors on his palette, and so the tone was the most fluid it has been in six installments.

With the story kicking into a higher gear, here’s hoping that ‘Nimrod’ can stick the landing a bit, and not fall victim to the same borderline lugubrious pace it has set thus far. 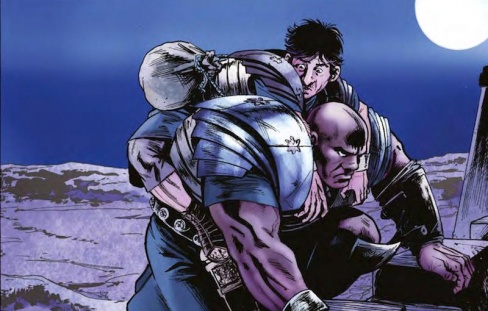 Christopher Egan: As the First Roman-Jewish war rages on Aquila recounts his promise to General Titus; finding a way beyond the Masada Plateau. It is the main obstacle blocking both the plans of Rome and Aquila. As Aquila and his faithful companion reach the top of the 1300 foot landmass, they come across the homes and the fortress of the Jewish soldiers. However one thing stands out to Aquila: the smell of blood. It has been spilled everywhere and he had no part in it.

A lone man, covered in blood and surrounded by bodies explains that rather than being slaughtered or becoming slaves to the Romans, every Jewish man was tasked with killing his own family and then himself. Once finished with his tale, the man stares down Aquila, explaining that he knows who he is and what he seeks. Slitting his own throat he tells Aquila that his secrets will die with him, but Aquila has other plans. Aquila reaches into his bag and brings forth the head of Scarabatus, a powerful Necromancer.

What comes next is a shocking sight that even Aquila wants no part in once it has begun, and it is an event that will stay with him the rest of his life, whether he is immortal or not. The chapter ends with us returning to the current time of 79 AD as Aquila senses enemies headed their way, and a few new players enter the story.

Rennie’s script is potent this week. There is no fluff, no unnecessary exposition. Intriguing dialogue and narration text that feels like the great adventure fables. The horrors of ancient warfare and the conquering of a specific people are fully felt through his words. The story moves at a breathtaking pace as it moves into its supernatural portion. We are unaware of what will happen as the characters are. It is incredibly creepy and really evokes the terror that can be brought up in religious horror. Goddard’s illustrations evoke a feeling similar to the climax of Raiders of the Lost Ark or a story beat from an early arc of “Hellboy.” He gives us some nice bits of violence, a welcome mainstay in this strip, and his work is ultimately great throughout. His style feels like a brutal and shocking version of fantasy comic strips of bygone eras. Bowland’s colors are, again, one of the best things on display and her work simply makes the pages shine. It allows for Goddard’s retro style to exist harmoniously along with her more modern aesthetic.

“Aquila: The Burning Fields” Part 3 is a very welcome and spooky chapter in this saga and hopefully the strip will continue in this direction. 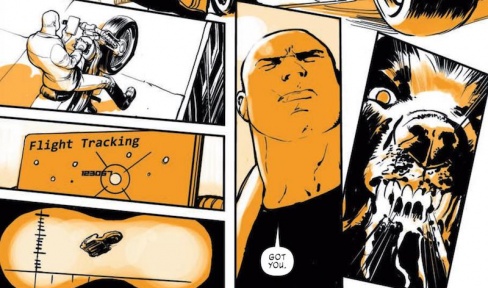 Greg Lincoln: Simon Fraser gets to full in shine this week, there is little in the way of dialogue and narration but there s no lack of story in part two of “Hershey.” Frazier carries the stories through the visual clues dropped, he introduces Hershey’s aid in the opening panels as the art lends the mind to adding the sound effects that are cleverly left out of the panels. What we’re really treated to here is Hershey’s introduction to the enemy, a meeting with a “friendly” and a run that makes her “feel like a Judge,” something she likely has not felt in a long time having been chief Judge.

Robe Williams mostly steps aside to let Fraser shine in his three tone glory on these pages but he does get in some very Judge-like dialogue for Hershey. She gets to be the badass she’s always been delivering lines like, “… here’s my passport” as she pulls her lawgiver and calling for the gun to switch to “high explosive” as she dissuades their enthusiastic tail. Sure it’s a little on the short side but it’s so well illustrated and colored the high speed of it can be forgiven.