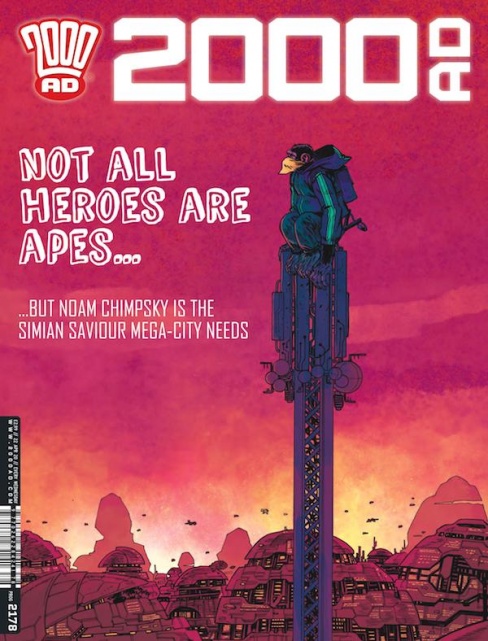 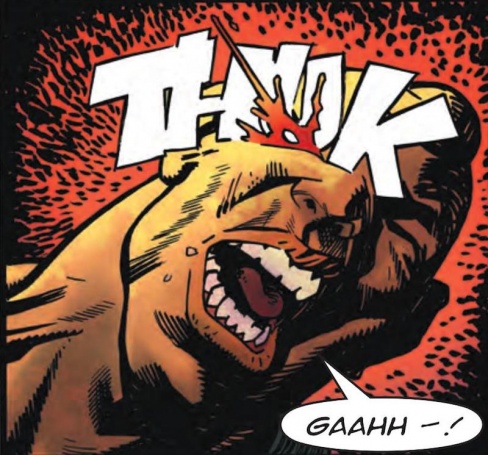 Michael Mazzacane: Who knows what evil lurks in the hearts of men? Noam Chimpsky does.

We get our first multi parts trip in a while with the start of ‘Chimpsky’s Law.’ Ape characters like Noam aren’t new to Dredd, but this ones emphasis on vigilante justice and maintaining crime within agreeable parameters is a interesting commentary on the inherent conservatism of the superhero figure (in that they fight to maintain the status quo.) Niemand’s script gets a lot across in the opening three and a quarter pages. Noam is clearly capable and competent, unlike Judge Stan, but he has also engineered the protection of this space much in the same way the Judges do.

Artist PJ Holden’s linework is cartoony with just a dash of Vertigo edge and creepinees. Noam has his “secret” identity as the local talking ape but in that mode Holden draws him with the most garish almost painful facial expressions as he acts “dumb.” Holden’s work reminds me a lot of Jeff Lemire’s stuff, especially when it is paired with Quinton Winter’s color palette. Winter gives everything this nice warm glow to it, like it’s eternal sunset even at night with washed out lights. Like the character the art is all about the contradictions of appearances.

That tension comes to a head with the inevitable introduction of Dredd. The treatment of Dredd in this strip, his one page cameo, is perfect. The last strip played into Dredd as celebrity-icon, this strip continues that treatment but with a less of a laudatory tone. Dredd could be forcing Noam to reconsider some of his laws. 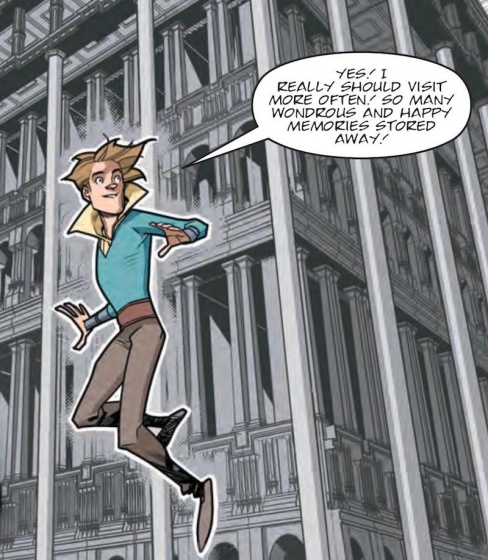 Gustavo S. Lodi: Same as it’s second chapter, “Survival Geeks” seems to fall prey to its own critique, in the sense that by making fun of some of the meandering, pointless comics within a larger saga, it loses the very focus it makes fun at. It is something of a metatextual existence in a way, but one that lacks a true compelling voice to rise above a failed attempt.

There are interesting concepts at play. The travel through memories while comparing that journey through the creative exploration of new comics, movies, and TV shows rings true. How often do projects start great, but do not connect to full realisation and to its audience?

The art is dynamic and fluid. It skews anatomy and facial expression just enough, without becoming overly cartoony. Action is fast paced, panels are well designed, and characters remain unique, even amid the doppelgängers from multiple realities.

It is on plot that it comes short. There is a general lack of drive, but very interesting ideas that try to be tied together, but there really aren’t. It is just too bad. For a series with such a wide range of concepts, the lack of connective tissue really makes the broader package suffers 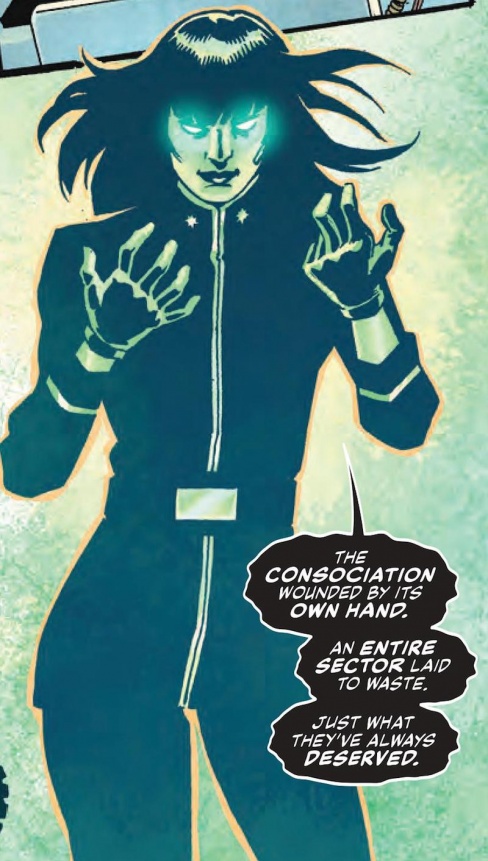 Brian Salvatore: “Skip Tracer” changes locales to the scene of what appears to be the final battle of ‘Nimrod,’ which is inside the brain/mainframe of the titular character. This gives Marshall and Teague some new ground to cover, artistically, as so much of the series was set in the same, cold futuristic setting, bathed in green light. At least here, they have some different tones to evoke, even if the story continues to be frustratingly light on content.

This chapter sees a fair amount of plot happen over the course of its short run time, but there isn’t a ton of context given or real character motivation to be found, so everything feels a little random and rushed, even if there isn’t real reason to feel that way in the slightest. For someone, like me, who is new to “Skip Tracer” with ‘Nimrod,’ there is little information about what happened before, or even reason to be interested. Even when interesting things happen on the page, the lack of context or allusions to the past makes it hard to get too invested.

While the last few chapters have been an improvement over the first few, in terms of forward momentum, until there is a reason I should care about any of these characters, the book will remain something less than exciting. 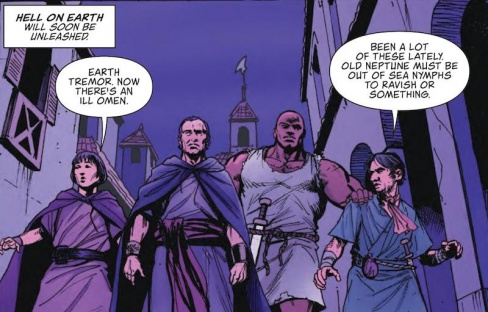 Christopher Egan: Magic! Fight scenes! Partially skinless villains! As events become more tumultuous, Aquila and his new found ka-tet are making their way through Naples, while the earth below trembles with molten magma, its own lifeblood is raging five miles below the surface. Hell on Earth is set to be unleashed, but can it be stopped? These current events lead Aquila to once again recall a past moment during the Roman/Judea war.

Aquila rips his way through undead hoards. Raging because he knows he must wander the Empire, blind, cursed, and alone. All he has is blood and chaos before him and he will unleash his pain on those around him. After Aquila thinks back on the brutal battles of the past, it is revealed that one of these skinless undead monsters has tracked him down. Seemingly their fates are entwined as they are both servants of the devourer. Blades are unsheated, and magicks are accessed. The group fight the monster, but things do not go easy for them.

This chapter is the first with a more or less ambiguous ending. The plot itself is clear, but the final panels leave us with answers as to how this chapter has ended, but which direction the story will go from here is unclear. More than ever, the story feels incredibly bleak. Aquila: The Burning Fields Part 5 is equally horrifying and exciting and is one of the best entries in the series so far.

Greg Lincoln:This week Williams, Fraser and Bowland treat us to to a display of Hershey still being a bad ass despite having a terminal alien virus. Even though her fixer/handler looks like a solid action hero they giver her the spotlight, the action hero. She’s out there moving up through the thugs playing Judge in what was once Columbia. Yes it’s played as a kind of set up given they have someone in the inside and yes it does start to go a bit sideways as the chapter ends but it does make for a solidly good chaper even if again it’s a bit on the spare end of wordy. Rob Williams delivers some pretty good quips and quote, but it’s no less then you would expect.

Simon Fraser is an artist who is not afraid to make people look a bit worse for the wear. His is no doubt deliberate with his art choices and he lets her characters appear with all the weight of their hard lives and within the ugliness that their faces have. Fraser is skilled at swath he’s doing here and it’s a gorgeous looking story if it’s not exactly pretty. It’s action packed and dosed with shadow, drab colors, and sour looks. He hits us with a flash of brilliant color as the ending surprise hits leaving us want more and teases next week’s developments.