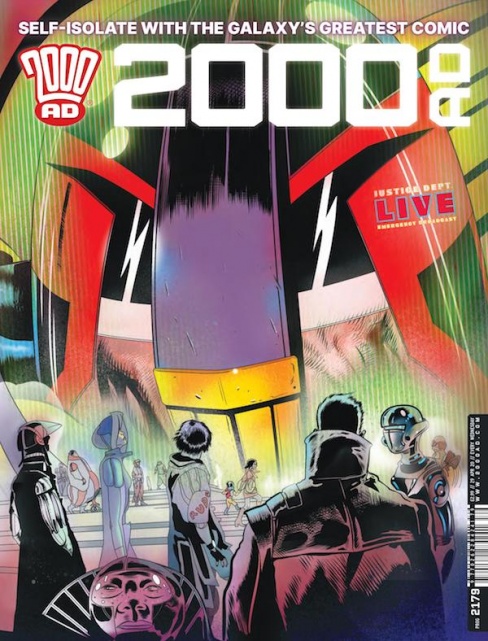 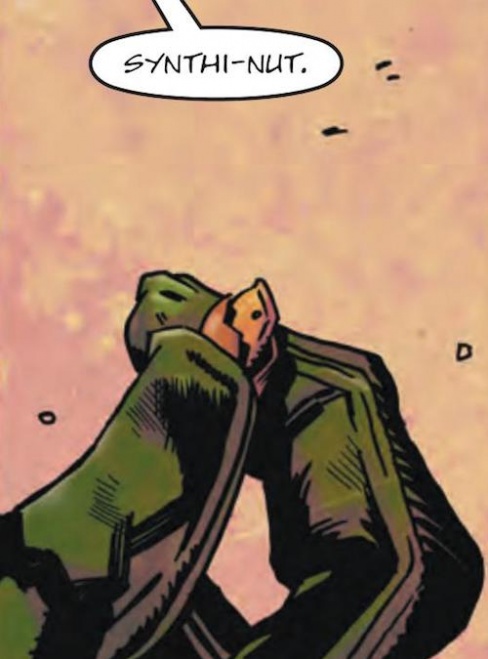 Michael Mazzacane: ‘Chimpsky’s Law’ continues with a fairly straight forward plot driven strip with a few successful gags as Noam tries to keep it all together and stop Dredd from doing what he does best. Oh, and maybe stop the local terrorist cell from doing something bad.

In the previous strip most of the humor was derived from Holden and Winter’s visual designs as Dredd literally burst on to the page. This time around the humor is dryer and more reliant on the reader being amused at Niemand’s scripting. There is something plainly funny about way central dispatch is used in this strip to interject with harsh reality. Other moments in the strip are more reliant on the interplay of words and pictures such as when Chet is introduced. This isn’t really a comedy strip but there is a cleverness to things.

I continue to like how Niemand is using Dredd in this strip, he is a force of nature in this strip the unmoving symbol of the cold, flawed, enforcement of the Judicial System. Holden continually pictures Dredd apart from Judge Stenz, even as they walk and talk Dredd leads and is in charge. It reinforces that while Stenz might be listed as ready for the Long Walk duty, he probably couldn’t make it around a city block.

The creative team also do a good job of showing Chimpsky as competent but overly confidant and egotistical. They seed these little moments throughout the first two strips so that when the finale for part two comes around and his best laid plans start to fall apart it works. Chimpsky is a good ape, but no one can control everything. 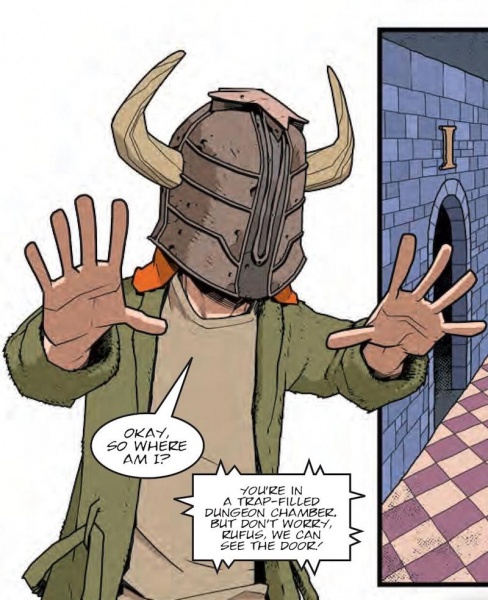 Gustavo S. Lodi: “Survival Geeks” is at its best when it focused on presenting outlandish concept after concept, like a barrage of insane ideas that pay homage and satire to the comics, RPG, and general pop culture tropes.

On this entry, the series feels mostly at home on this approach, with characters jumping from the typical dungeon crawler, into survival horror videogames, and into the multiversal analogues that have become commonplace to comic books. Dialogue is sharp and even with the lightning fast pace the characters go through, the jokes still land and the situations are remarkable.

The art has been consistent since the very first chapter of this arc, with an always dynamic depiction of the concepts the plot calls far. There is a very famous pocket monster scene towards the end of this chapter that is particularly reflective of the tone “Survival Geek” goes for: the borderline cartoon, yet grounded in a sense of reality.

All in all, chapter five of ‘Crisis of Infinite Nerds’ is probably the best on this arc of “Survival Geeks” so far: it connects to the beginning of the story and creates anticipation for the end game, while playing to its strengths of crazy situation and attractive art. 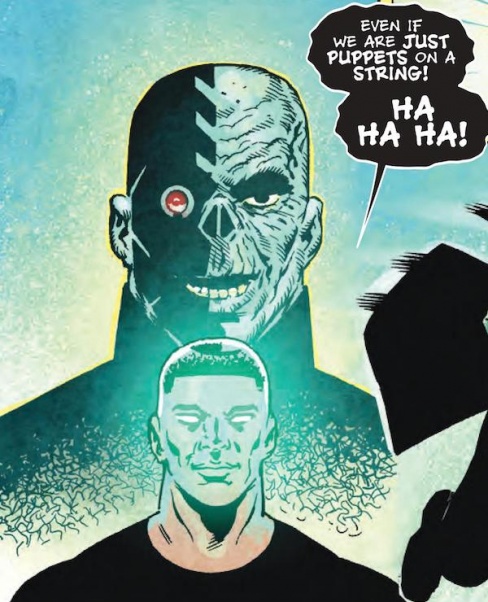 Brian Salvatore: Nimrod is defeated! Blake figured out a way to stop him! Yay! Oh wait…

One of the major problems with ‘Nimrod’ is that there is nothing in here to endear you to any of the characters. So, when Blake defeats Nimrod, there is very little joy, because there is so little emotional attachment to him. Even Nimrod, who is presented as this terrible adversary, is evil in generic ways, and doesn’t give the reader any real reason to have an opinion other than “that’s a cartoonish evil guy.” And so, despite this being the climax of the story, it still falls flat.

Additionally, this is only the penultimate chapter, and so next week, there will be a tale that sees if our ‘heroes’ survive which, inevitably they will. With such blasé storytelling, nothing jumps out, and this story is really limping towards its conclusion. Marshall’s artwork continues to be fine, but due to the amount of brainwashed or android-ish characters, his facial expressions have gotten more similar, depriving the strip of one of its most successful elements. 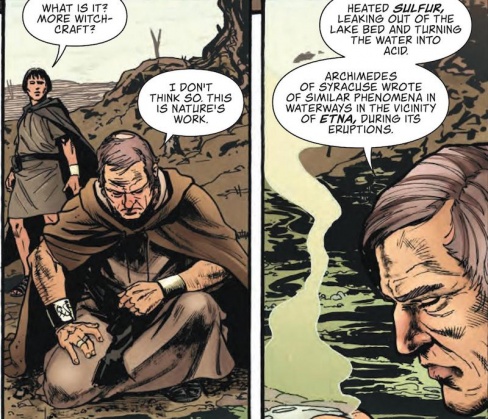 Christopher Egan: Picking up where we left off last week, Aquila’s companions await his return from below the depths of the shores surround the volcano, Mt. Etna. The sulfur content in the water turns it to acid, so this is no easy task, even for the immortal Aquila. In an unsettling turn of events, Aquila retrieves the severed head of Scarabatus the Undying, which he threw into the water years ago. Though, not in the most envious position, Scarabatus quickly knows that he is needed for Aquila and co. to continue their journey.

Being blind, Aquila needs these new, dead eyes to guide him to Hades. And this is where this chapter gets truly upsetting. Aquila’s slave companion sews Scarabatus’s head to Aquila’s shoulder. Suited up in new armor and a freshly acid-soaked talking head, Aquila is ready to continue on this insane journey. The gates of Hades are opening, and all manner of horrific things begin to happen. At this point an Earth shaking event occurs, tying this bonkers horror-gladiator story into real life events. We get a look at some of the lands we have visited and will visit in upcoming chapters.

This entire chapter is delightfully insane and unsettling from start to finish. The ideas and feelings on display here made me more uncomfortable than I expected to be. The idea of being in overly acidic water and SEWING a talking, decaying head to my body is just awful, and Goddard and Bowland’s work really gets those feelings and textures across.

The Burning Fields Part Six is both a narrative way station, and an oddly disturbing chapter. 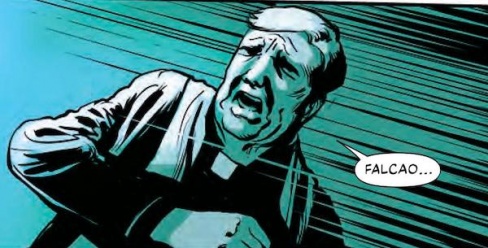 Greg Lincoln: Falcao is a despicable example of humanity and, given the tools to be above physical laws of reality by Smiley, makes him all the more frightening. The fact that Judge Smiley gave the encalidus technology to people like Falcao quite likely knowing the type of horror he’d commit makes me wonder what terrors are being committed around the Judge Dredd world. Rob Williams gave us a fairly fast paced, and kind of Hollywood, staged moments as things seem to go pear shaped. Yes it becomes quickly evident that this was part of the plan. Hershey and her small team used what little she has to draw out Falcoa. It was a great moment to see that happening as was the foreshadowing of the twist that finishes the week out.

Between Williams and Simon Fraser, they staged these scenes well. From the darkened, grayed out attack on the priest to the reveal of the sniper hide out and our hero hiding nearby to save De Andrade, all were staged in a way that no exposition was needed. As with previous parts, the storytellers show excellent synergy to build this story. It’s hard to fault this story even with the explosive endings telegraphed. Williams and Fraser crafted such a well conceived character in De Andrade that even though we don’t really know her, the loss in the final moments of this part is something we can palpably feel through Hershey.