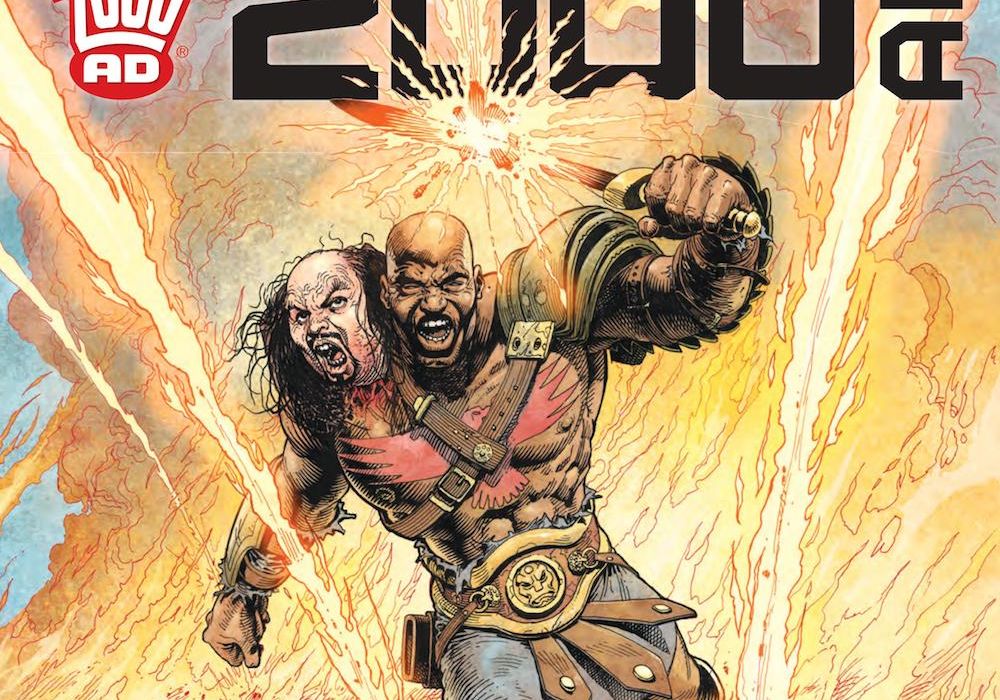 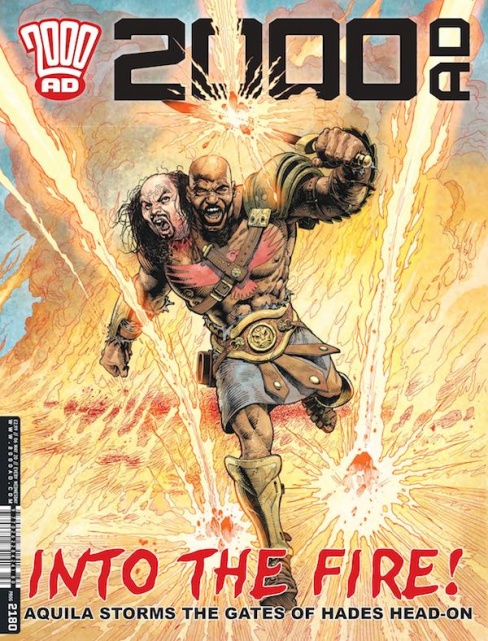 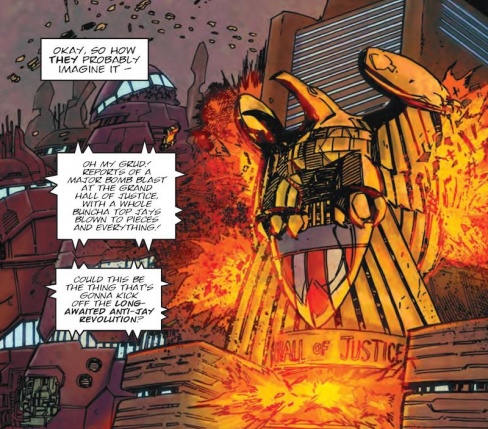 Michael Mazzacane: The third entry in ‘Chimpsky’s Law’ runs the numbers as Noam tries to figure out how to get himself out of this mess. By running the numbers the art team is able to show a variety of styles in the first couple of pages as Noam illustrates the range of possibilities that lay before him. At one end there is the way the terrorist cell thinks it will go down, where they are heroes and it is all so very easy. At the opposite end is something closer to reality that involves a hail of bullets and a dead chimp. All of this is done through a slight shift in how the strip has used Noam’s perspective that opens plenty of possibilities as the attack looms.

The range of possibilities explored in the opening pages are funny for a couple of reasons. There is the parodic ease to it all and self congratulatory nature to the first page. Ironically this is the darkest page in terms of color pallet, it is the darkest timeline because without the system there is no reason for Dredd to exist. The following page, closer to reality, looks appears normal except for Holden’s use of extreme angles one right after another to represent the tension and futility the terrorists operate with. Also Noam gets gunned down. The creative team create some more plain straightforward humor in the strip such as when everyone dons monkey masks.

Structurally the creative team do everything you’d want in these five pages. It mixes a strip that is all about plot movement and build up with some gags and shifts in perspective to tell this episode of the story. Table setting is a necessary act but it is rarely a fun, engaging, thing to read or follow. The third part of ‘Chimpsky’s Law’ manages to do both. 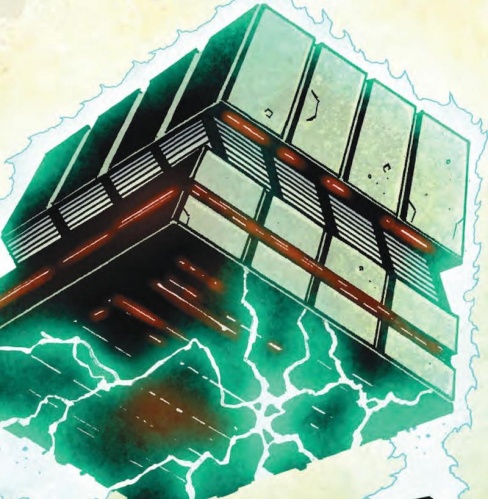 Brian Salvatore: For those that have been following along with my “Skip Tracer” reviews over the last 10 weeks, pacing has been my biggest issue with ‘Nimrod,’ and true to the end, pacing was the culprit. Last week’s strip ended on a cliffhanger, which gave the start of this week’s installment a jolt that had not been present in some time. However, Peaty’s script had the cliffhanger resolved almost instantly, and in the most boring way possible, plunging the strip into pure ‘plot cleanup mode’ for the rest of its run time.

About half of the remaining pages are dedicated to what will happen to Nimrod now that his plan is foiled, but because of the lack of attention paid to the character over the past nine weeks, it doesn’t seem that any reader would really be chomping at the bit to find out what happened to Nimrod. The other half are dedicated to wrapping up the emotional beats of the story, which actually work pretty well, if you can get past the cliches that drop from every page.

Saving all of the heart for the last pages of the last chapter does a disservice to the emotional storytelling that was attempted here, and it also means that the entirety of the strip is Marshall drawing various characters in similar states of relief. So much of this strip was Marhsall drawing characters talking to each other in boring settings, and that continues here. It feels like a real waste of his talents.

All in all, ‘Nimrod’ was a very disappointing tale, which exposed the worst tendencies of serialized storytelling. Hopefully, when “Skip Tracer” returns, it is with a story that is more suited to week to week reading.

Gustavo S. Lodi: There is a very strange, almost intentional, pace of good issue versus bad issue of “Survival Geeks.” For every entry that offers imaginative concepts and ideas, there is inevitably a doppelgänger that seems content on rehashing comic tropes and leave high concepts as unrealised potential. This, unfortunately, is one of the down ones.

Focusing on the positive first, the art style and consistency for “Survival Geeks” has been top notch, from start to finish. Designs are clever, especially when having what are the same five characters being depicted in so many shapes and forms, and remaining easily identifiable as well. Action is dynamic and fluid, panel design pulls readers close into the motion and are well-balanced between more open scenes and close-ups.

That said… this chapter seems again like filler to the grand confrontation that is about to happen. Instead of pushing the story forward, the plot seems content on revamping events that took place just few issues (and pages) ago, and any sense of momentum is lost. Dialogue though, always a highlight of this series, remain quite strong, but are simply not enough to make readers compelled to the latest events.

It is truly a shame. There is greatness in “Survival Geeks,” but it gets lost in the shuffle. Perhaps when the entire story is concluded the master design will be more apparent? Here’s hoping for yes. 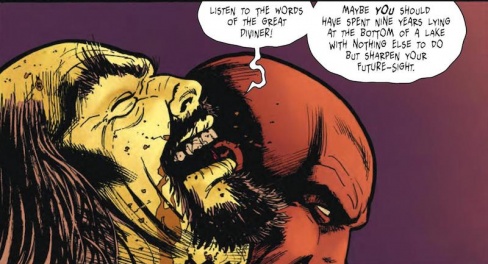 Christopher Egan: Aquila and co rush into action as Mt. Vesuvius erupts, showing the world its true nature. The Pompeiians believed it to be nothing more than a mountain, but they built their homes in the shadow of death. The use of historical fact mashed up with fiction really works in this chapter. As the volcano brings hell on Earth, Aquila – growing concerned with these events – asks the great diviner how they should proceed, with lacking results. With their motives coming up against the wall of uncertainty, the heroes must fight their way through, rather than around.

This chapter gives readers some great sword play. As the powers of Hades spits enemies at Aquila, bloody battles commence. Goddard gives brings the action sequences to life. This is an action-centric chapter and It. Is. Glorious. Swords cross, supernatural powers fly, blood splatters. The script and the artwork both walk the fine line of exploitative fun, and incredibly fun gladiator action. With the incredible destruction of Mt. Vesuvius surrounding them, the wild action of these combat scenes is perfectly mirrored. You feel the pulse-pounding action throughout.

As each chapter of ‘The Burning Fields’ comes out the horror and action both ramp up wildly each time and it all works. This week’s strip doesn’t do much to move the story forward, but if we are going to take a slight break from Aquila’s mission, this is the kind of pit stop that will readers happy. And we still get some solid details to push things to the next chapter.

“Aquila: The Burning Fields” Part 7 continues the best style and tone of this series. You get the gore, the action, and the character building moments throughout. It is an excellent addition to the series.

Greg Lincoln: After the Hollywood like explosive ending of the “Hershey” strip it’s surprising how un-Hollywood that this chapter is. Seldom in a big budget explosive ending its very uncommon that there is any cost for being so close to the bomb. Rob Williams is not committing anything like that here. In addition to the loss of their woman on the inside Hershey and her “partner” here lost the priest that was helping them, her helper lost and eye and Hershey, who was lucky to survive the bond she placed herself close, woke to a body more wounded then before. The dialogue in this week is honest and hours because it delves into the trauma of working for justice and I suspect some of those thoughts are more derived from real police then just from inference. This week’s script from Williams is quite in nature of not in fact. The personal nature of the story really draws you into the images and settings that he, Fraser and Bowland created.

The bouncing from scene to scene that Fraser had to navigate is surprisingly coherent. The colors and scenes go from bright flashy and chaotic to muted cold grey and sedate. All the scene and color choices all carry an impact and give this chapter a feeling of the passage of time. Hershey’s partner goes from clean faced to bearded, Williams doesn’t need to tell us time has passed as Hershey recovered the visuals tell the tale. Hershey looks more worn and haggard in addition to the loss of her arm and leg. Fraser’s art make the trauma she’s feeling obvious beyond the loss of her limbs. The impact of the deliberate chance of color and tone in the final panel makes you look forward to her fulfilling her desire for revenge soon.