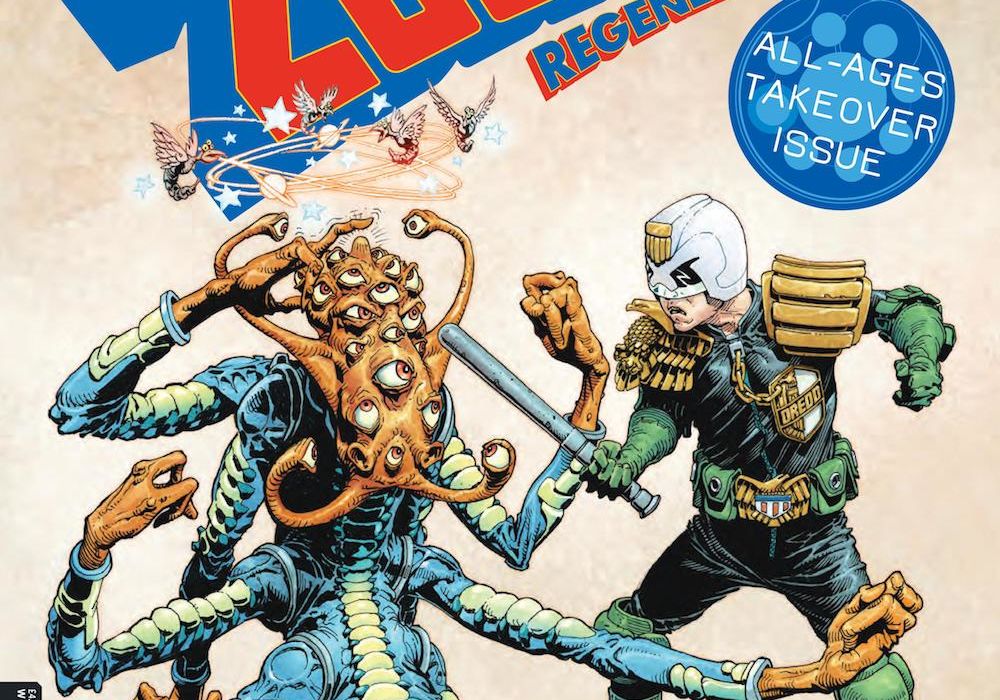 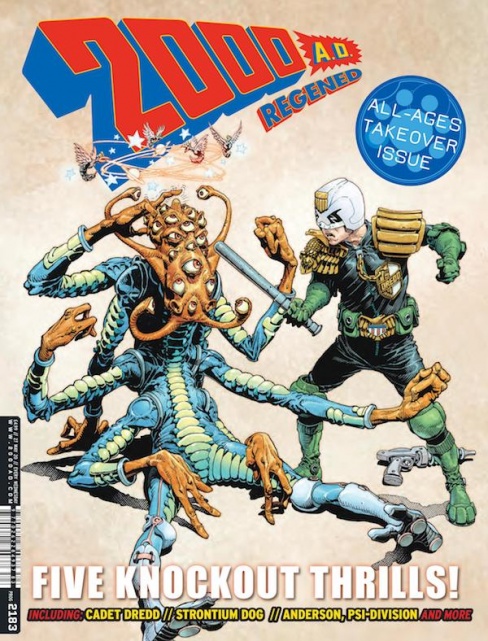 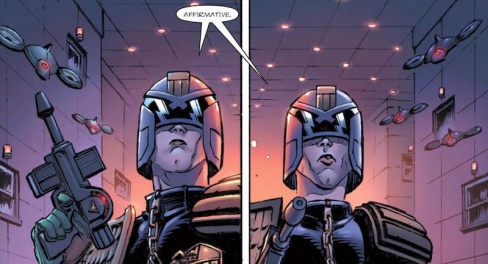 Michael Mazzacane: ‘Cadet Dredd’ strips often offer a more comedic take on the Dreddverse, the early days well before epics like the ‘Apocalypse War’ or ‘Day of Chaos.’ ‘Combat Ready’ is a more straightforward strip about the early days of Dredd as he and Cadet Falkirk go through their first routine combat assessment.

This combat assessment is straightforward, like a serious version of that scene from Men In Black. Assirell does a good job of making Dredd and Falkirk mirrors of one another. Where Dredd is quick and precise, Falkirk is just a hair slower and more of a sledgehammer. Mirroring them off one another makes for a good rhythm that creates the sense of tension and fast twitch reactions.

Their combat assessment isn’t the only part of the strip as they also get called into deal with some unruly robots. As a prequel strip there is room for Matt Smith to play and foreshadow bits of other “Dredd” stories yet to come. There is one part that has me curious, Falkirk knows Dredd and Rico are clones. That they are clones of first Chief Judge Fargo is left unsaid. I do not think this is common information at that point considering how the initial Dredd and Rico stories are treated. Either way acknowledging this fact in the present moment is perfectly fine with me, readers know the secret so acknowledging it and making it part of the reason for why Dredd is better is an effective choice. It is a good example of using continuity to add character to a story instead of being restricted by it.

The straightforward nature of this strip is interesting and refreshing. The best thing about MegaCity One stories is there is always enough room for whatever story you want to tell regardless of genre. This can lead to some really weird stuff occurring, so getting to see a straightforward (by that standard) strip was a nice tonal shift. It’s still a dystopian fascist hell pit of a space, but less of one considering what happens in the years ahead. 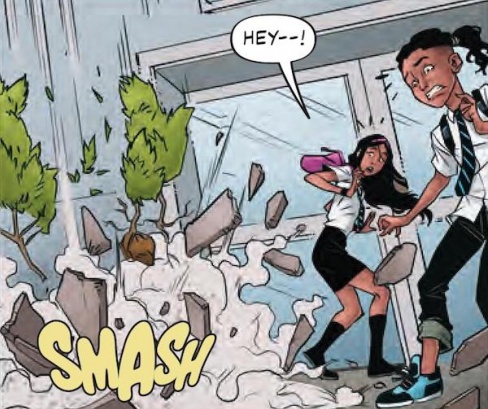 Greg Lincoln:“Finder and Keeper” may be just a bit of ghost hunting fluff fun for this seasonal YA special issue but it’s one brings with it some punch to get you in the feels. John Reppion and Davide Tinto play with some pretty well worn ghost and haunting and comedy tropes in ‘Nuisance Neighbors,” and they actually work quite a treat. The ghosts are quite obviously playing, if occasionally destructively, having a laugh and even before we see them through the finder quite obviously children. The best comedy moment happens pretty fast as the ghosts raise someone’s drying laundry as well traditional ghost shapes, it’s silly and fun and sets the tone for the remainder of the strip.

The antics play right into that near Home Alone level of mischief right up till the punch in the gut twist. That reveal that the kids were killed playing during the bombing of Britain in WW2 has impact, it’s a moment in the comedy where the lasting terror of their final moments is something you can feel. Yes, the comedy ensues again and the story goes back tot he play and fun but feeling remains. “Finder and Keeper” is a fun young adult strip and it’s stories like this that make it more then just forgettable filler, Reppion, Tinto, Boswell and Bowland bring something a little deeper to the table with this seasonal special strip. 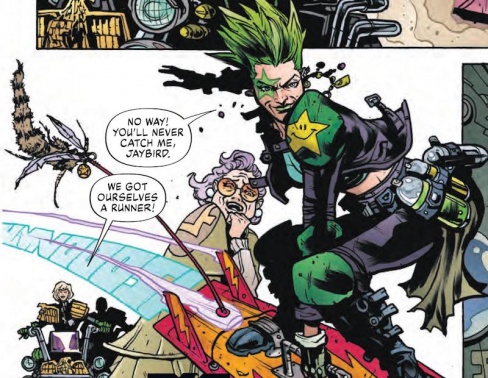 Christopher Egan: This week’s one-shot is a fun sci-fi adventure. While Judge Anderson and her partner are on patrol, they come across a local thug. Joni Reeves, who is known for tagging walls. Attempting to arrest her and sentence her to a few weeks for the graffiti, she evades them, leading to a chase across Mega City One. After a Back to the Future Part II style hoverboard chase, the Judges lose sight of Joni, but come across a peculiar case in one of the Mega Blocks.

A middle-aged woman comes out to ask if the Judges will come with her to her apartment because he son is acting strangely, to a point in which she believes it is no longer her son. Curious the Judges join her. Her on Daniel is, seemingly, a model child. Does his chores and schoolwork, is well spoken and very polite. Anderson is confused by the urgency of the woman’s pleas, until she realizes who Daniel is – a leader of a teen gang network, this is clearly not the same kid the Judges have dealt with in the past.

The plot gets wacky and moves into a kind of body-snatcher story, as the change in Daniel and other kids in the Mega Block seems to stem from their enrollment at the local school, which has recently been put under the leadership of a robot principal. A really fun and silly Mega City One story that feels very much like The Stepford Wives meets classic 2000 AD strips. The story could have been stretched out into more than one issue, and the ability to do something more with it is lost due to that, but it is still enjoyable from start to finish. And at ten pages, it gets a little more room to breathe than most of the Prog strips.

‘First Class Citizen’ is, overall, a solid Judge Anderson story that puts both her and her partner’s psychic abilities to use, but it could have been an even greater story in a longer format. 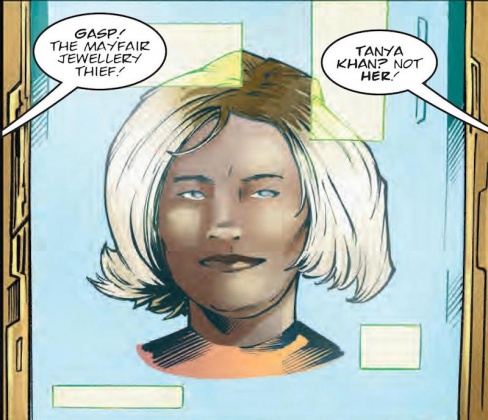 Brian Salvatore: If you want me to buy into your royalty story, allude to King Ralph. While ‘The Queen of Mean’ isn’t exactly a gender-flipped reboot, it is close enough that I will allow it.

The British crown, due to some unpleasantness with the most recent King, will now be decided due to a random number generator, assigning one British citizen with the role of the monarchy. Much to everyone’s surprise, but true to the purely random nature of the software, a noted jewel thief is selected as the new Queen of England. She is both a criminal and rude, causing all sorts of trouble and making the monarchy look bad (well, even worse if we’re being honest).

Andrea Mutti, who recently wrapped up “The Returners: Chandhu” in the pages of the Judge Dredd: Megazine, throws all the British iconography onto the page, and balances them with small touches of sci-fi futurism, whether it is ostentatious pink sunglasses or weird fashion trends. Mutti’s work is somewhat timeless, despite the sci-fi elements, which works well for a story like this.

There is, of course, a twist at the end, which was relatively easy to guess in one way, but adds a fun wrinkle to the story that raises this a notch above your standard “Future Shocks” installment. 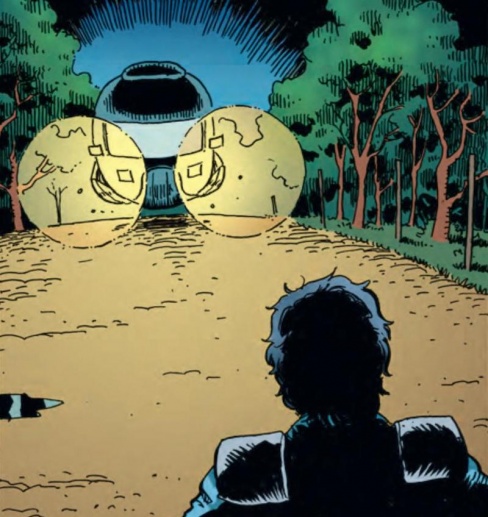 Gustavo S. Lodi: ‘Acceptable Losses’ is a one-shot, introducing readers to the character of Johnny Alpha, a mutant with telepathic and x-ray vision powers, set in the context of a world with a dominated mutant class from baseline human oppressors. And while there are some interesting ideas to be found on these pages, there is not a lot that readers of the genre haven’t seen before.

Visually, “Strontium Dogs” is very well conceived, with a dark, gritty, even dirty look to it, that frames the situation very effectively. It is clear from the opening pages that this is a world gone wrong, with consequence on the basics of its architecture and overall environment. Character designs, especially those of the more deformed mutants, is creative, with some truly ghastly creatures rooming around the place. Colours are also aligned with that aesthetics and add to the overall atmosphere.

Story-wise, there is only so much that can be done on as many pages to introduce a main character, world, relationships, and mission statement. Props to the creative team for managing to squeeze in as much as they can, even if some of that is done to the sacrifice of some dialogue that seem heavy on exposition. And although Johnny Alpha is your typical angst teen, thrown in the middle of impossible odds, he is likeable and relatable, in a mutant apocalypse kind of way.

All in all, “Strontium Dogs” may not change comic’s landscape with this one-shot, but nor was it supposed to. It tells a compelling story that, by page’s end, made its audience care for its lead and general surroundings. 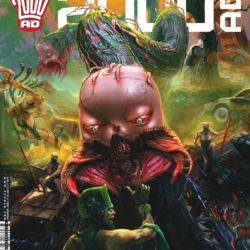 Welcome, Earthlets, to Multiver-City One, our “2000 AD” weekly review column! Every Wednesday we examine the latest offerings from Tharg and the droids over at Rebellion/2000 AD, the galaxy’s leading producers of Thrill-Power entertainment. Let’s get right to it!THIS WEEK IN 2000ADJudge Dredd: Carry the Nine, Part 1Credits: Rob Williams & Arthur Wyatt (script), Boo […]