Non-fictional comics are unusual animals: setting out, like any non-fictional book, to tell you about a subject in a largely objective manner, the fact that they’ve got the subtle tools of the comic medium to work with entails that they’ve got quite a bit of flexibility in terms of what flavour of objectivity they want to portray. This doesn’t necessarily entail that non-fictional graphic novels are less reputable or reliable than their text-only cousins, but that they have more and different means by which to engage the reader’s interest and reinforce his or her learning. (It’s no accident that they’ve been accumulating on the shelves of high school libraries lately.) And so, in this second installment of the monthly column, Multiversity will be “keeping it real” by learning about Louis Riel and his struggle with the Canadian government, as depicted in “Louis Riel: A Comic-Strip Biography” by Chester Brown. 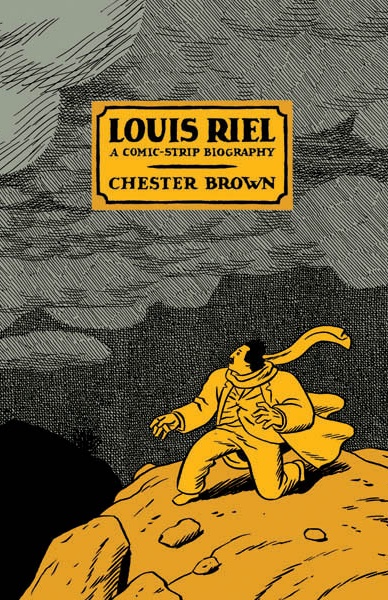 A controversial figure who is revered by some and despised by others, Riel and the spectrum of political maneuvers that he negotiated are very difficult to portray even-handedly. To boil things down a bit, though, Riel was a MÃ©tis living in the Red River Settlement, an area populated by both MÃ©tis and English-speaking people and constituting a part of Rupert’s Land. When, in 1869, Prime Minister Sir John A. MacDonald agreed to sell Rupert’s Land to the Hudson’s Bay Company, Louis Riel mobilized the MÃ©tis of the Red River settlement into rebelling against this attempt to control their territory. The result was the establishment of the province of Manitoba, and later, another uprising led by Riel, the North West Rebellion of 1885.

Brown maintains a focus on these two rebellions, recounting very little about Riel’s life before the Red River Rebellion and almost entirely ignoring Riel’s non-political years as an exile in Montana. Riel as a political leader, meanwhile, is for the most sympathetic, a reluctant yet astute figure who is unusually good at getting the attention and even the grudging respect of those in authority. And while, like all the other characters in the book, he is portrayed as displaying little emotion, there is also a certain charisma and magnetism which comes across during his plain-spoken speeches to the MÃ©tis and to the English. Later, particular emphasis is placed on Riel’s reluctance to use violence, even when taking English prisoners, and when things get violent anyway during the North West Rebellion, he displays a reluctance to employ what he calls “Indian tactics”, or guerilla warfare.

Riel was also something of a mystic, and during his exile from Canada had several revelations which led him to believe that he was a prophet and an incarnation of David. While very little time is spent on them, these are, visually speaking, some of the most interesting moments in the book. Riel, heretofore restricted to stolid furnished rooms and silent snowy landscapes, finds himself levitating over raging flames and drifting past Saturn. These revelations, by the way, eventually had him placed in an insane asylum, but he would later harness this particular brand of fervour in inspiring his troops during the North West Rebellion.

Mystical experiences aside, however, I think the most striking thing about this biography is its interest in weird little details and sidebars, noting down as it does the sort of small occurrences which you might encounter either as footnotes in history books or not at all. That Colonel Dennis disguised himself as an Native woman in order to flee from Riel’s forces and into the States is not exactly essential to the story of Riel, but damned if it isn’t an interesting tidbit. Similarly, Brown goes to great pains to portray the fact that just before Riel’s execution by hanging, he was instructed to climb from one room into the one with the gallows in it by means of a window joining the two. He may or may not have had his hands tied behind his back at the time, a detail which Brown puzzles over in the index at the back of the book.

This index, meanwhile, make for unusually fascinating reading. Operating more as a series of footnotes than anything, these (hand-lettered!) pages offer extra information about the historical events depicted in the book on a panel-by-panel basis, as well as point out where the story depicted embroiders on or deviates from the facts as they are generally agreed on. Prime among these is Brown’s decision to take a conspiracy theory — that the government actually incited the North West Rebellion, as a justification for continued funding to the Canadian Pacific Railroad — and portray it as a given fact in the story. While it adds a certain intrigue to the proceedings, it is not a theory generally entertained by scholars, and in this respect “Louis Riel” becomes more of a historical narrative than a history in its strictest sense. 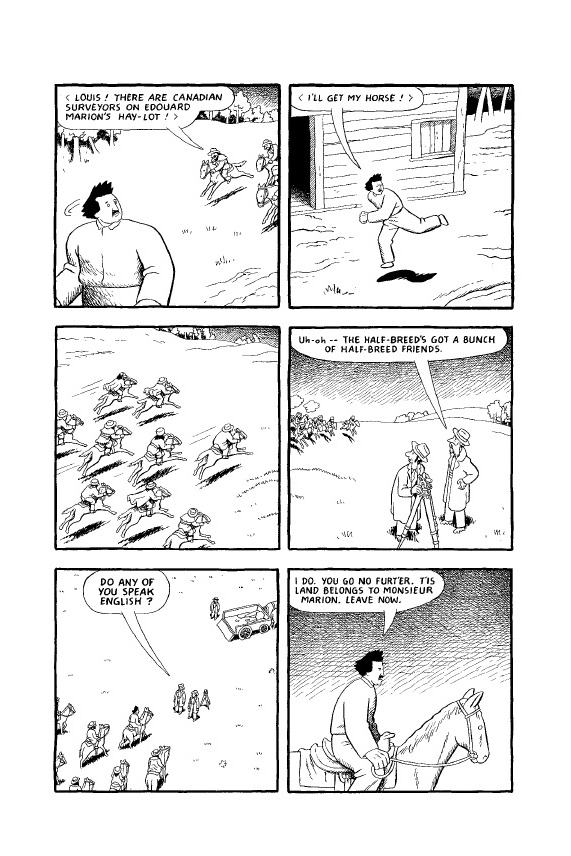 As for the art, Brown cites the work of Harold Gray on “Little Orphan Annie” as well as HergÃ©’s Tintin books as sources of inspiration for his overall style, and you can definitely see a little of both in the black and whites pages of “Louis Riel”. Lightly caricatured faces balance atop chunky but expressive bodies, while the backgrounds come across beautifully in their clean lines and precise cross-hatching. All the while, though, there is something remote about the art style, always framing its subject at a distance and featuring a lot of simple, dead-on compositions. The layouts, meanwhile, are always the same, with each page featuring six, evenly-sized, evenly spaced square panels. As mentioned, there isn’t much in the way of facial expressions either, and for the most part one is left guessing as to what a character is thinking or feeling, and attempting to fill in the gap by looking at the concatenation of events surrounding their situation. This, of course, is something we do all the time when reading history books, and maybe in this respect — that is, refraining from guessing at the emotional states of his subjects and choosing not to imply them through expression and composition — Brown is sticking a little closer to non-fictional conventions. My feeling, though, is that a little visual dynamism would have gone a long way, especially since the index makes it clear that Brown was willing to play a little fast and loose with the facts in order to tell an engaging story.

Having grown up in Ottawa, I can vouch for the dull and colourless way in which Canadian and QuÃ©becois history tends to be taught, as well as the distinct lack of time spent discussing the political projects of groups like the MÃ©tis. It took me a long time to come around to Canadian history as something interesting and surprising, and even now I find it a little shocking to realize how many important — and ridiculous — political happenings went down in my hometown. In that respect, a book like Louis Riel really is a blessing: it’s not terribly often that one sees Canadian history laid out in such a stylish and compelling — if slightly rigid — manner, and with appropriate contextualization re: that conspiracy theory, this could be a wonderful addition to any classroom teaching Canadian history. And as for a book to read in leisure time, I don’t think you’ll ever come across a more unusual or arresting look at one of the more peculiar men to shape the future of Canada.