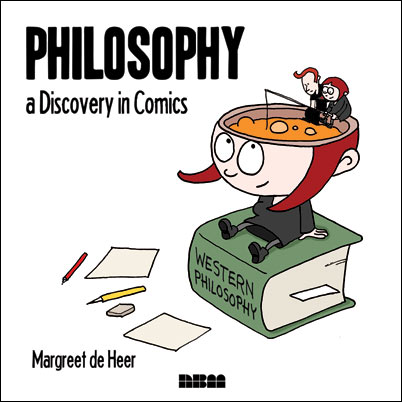 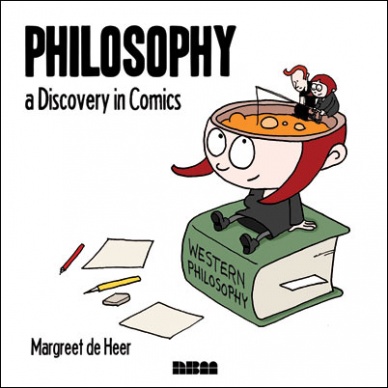 “Who are you? And what makes you think you’re such an expert on philosophy?” This is a question that gets posed to the author, Margreet de Heer, about halfway through “Philosophy, a Discovery in Comics”. It’s her husband, loosely cartooned and sporting a gigantic hair flip, who asks it; and it’s about the right moment, because at this point in the book she has said “I think…” multiple times when discussing famous philosophical ideas. De Heer’s answer to this question comes up over and over again after this point, and constitutes the general message of the book: it’s more important for a philosopher to know himself than to know anything else, and good philosophical questions can come from anybody. Even, and especially, you, the reader.

It’s an unusual bit of emphasis in a non-fiction comic, particularly in one which at first seems to be a straightforward and simplified history of Western philosophy. But that structure rapidly breaks down over the course of the book; De Heer, appearing in person on the page alongside her husband and colourist, Yiri T. Kohl, starts with Socrates and Plato but quickly skips ahead to the Medieval philosophers, then much further ahead to Erasmus and Descartes and Spinoza. The next section is entitled “Personal Philosophies”, and centres on the likes of George Carlin and the author’s mother-in-law. It’s the loosest of loose approaches, imparting a bit of biographical information in regards to each spotlit thinker but mostly focusing on a few larger trends in their thinking — particularly the notion of free will vs. predestination. Even de Heer’s personal experiences, and some details as to her own philosophical development, come up. But over and over, as a central theme, de Heer comes back to how important it is to ask philosophical questions – and mull over their possible answers – for yourself.

All of this makes “Philosophy” more a book about de Heer’s personal engagement with the topic than it is about philosophy itself, or any of its foundational ideas within Western society. If there was any doubt as to this fact, the author’s sources at the back of the book – Google and Wikipedia – will give you an idea of the depth of information involved. But the historical details and the nuts and bolts of specific theories simply aren’t the emphasis here – and according to de Heer’s own logic, the introspective route is the truest way to approach these ideas, even in their simplified forms. It’s a circular construction, of course, but its strength is that it teaches by example and encourages thought. As de Heer engages with major philosophical ideas, saying what she thinks and referring to events from her own life, she subtly invites the reader to do the same. 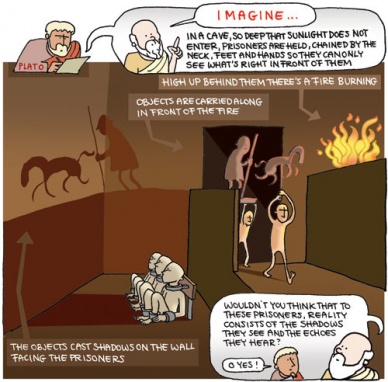 De Heer’s cartooning style is simple and friendly without being cloying; she and her husband are stout, amiable figures on the page, while the greatest minds in philosophy look similarly approachable. Most charmingly, De Heer portrays herself as expressive to the point of being over-the-top, often pacing back and forth or gesticulating wildly as she zeroes in on one topic or another. Meanwhile, Kohl’s bright, flat, and saturated colours keep the general atmosphere light.

The strongest aspect of the art is probably de Heer’s layouts. While the biographical sections are typically laid out very simply, using many small, square panels, the more conceptual moments – the ones in which the bare bones of major philosophical ideas are dealt with – are much more interesting and complicated, with De Heer patterning out the information in dense splash pages which allow the reader some freedom in terms of reading order. It’s a tactic which nicely underscores de Heer’s central message, as well as gestures toward the subjectivity of philosophical thought in general.

“Philosophy: A Discovery in Comics” probably isn’t for anyone, least of all those looking for, well, a solid introduction to the major theories of philosophy. This book is very much a “discovery”, a “first look” at philosophy that warns against subscribing to any particular system of thought too rigidly and instead encourages critical, personal engagement. It’s an important lesson to learn, particularly for young adults who are just beginning to engage with abstract thought, but it will likely have its detractors – particularly the more voracious learners, who will probably want to skip past all the hand-holding and get to the good stuff. Still, this is a fairly universal lesson, and it’s one that thinkers of all ages can profit from reconsidering every now and then.

Originally released in Dutch, the English version of “Philosophy: A Discovery in Comics” is published by NBM Publishing. For more information (and for an adorable bit of animation), check out the author’s website.