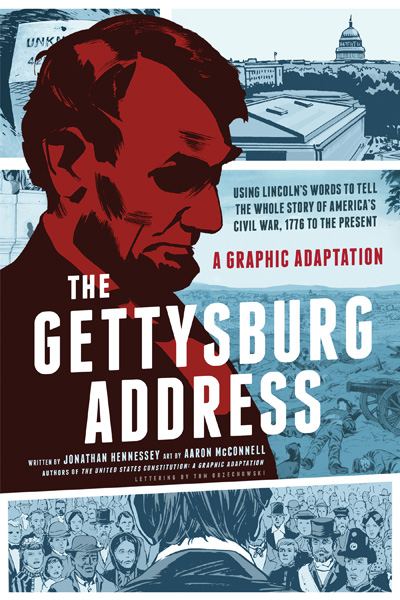 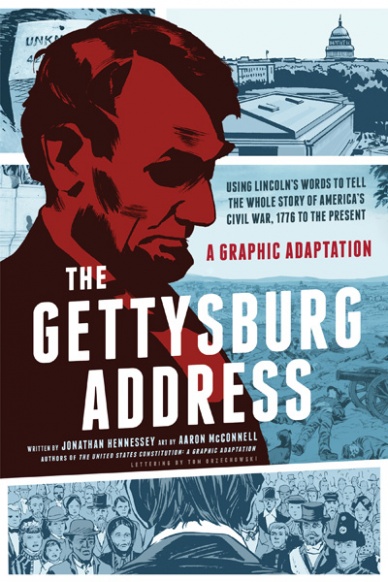 The Gettysburg address is by no means a neglected topic, even in comic book non-fiction (there are at least two other books on it). And why not? It’s peculiarly suited to the medium: short, poetic, allusive, oft-quoted, Abraham Lincoln’s famous speech can be used as a springboard for all kinds of ideas and images related to the turning points of American history. This adaptation certainly tends in that direction, with a tangential overarching structure and lots of heavily symbolic imagery.

Written by Jonathan Hennessey and drawn by Aaron McConnell, this book is structured by the actual words of the Gettysburg address. Each chapter centers on a particular topic, mentioned or alluded to in Lincoln’s speech, and Hennessey’s script proceeds very loosely from there, working more within the realm of thematic connection than literal explanation. The book also extends beyond the span of Abraham Lincoln’s life, exploring the politics of his assassination as well the legacy of the address, particularly in the realm of civil rights.

Along the way Hennessey gets across a wealth of contextual detail, taking the reader on fascinating little tangents regarding subjects which influenced the Gettysburg address or the course of the Civil War as a whole. Topics are diverse as the soil depletion factor of cotton, the evolution of the rifle, and the emerging popularity of garden-style cemeteries are all deftly worked into the overarching narrative in a way that underscores the complexity of this historical moment.

Some powerful and unusual images are used to illustrate these points, with Aaron McConnell’s art really rising to the challenge of allegorically and metaphorically portraying a political situation. The book reproduces several political cartoons from Lincoln’s era, and the storytelling style takes its cue from these examples, incorporating symbolic features like snakes and chess pieces and often using stylized diagrams to illustrate the nuts and bolts of Civil War tactics. McConnell executes all of these with precision and subtlety, alongside a nice feel for the Gothic and grotesque. And while his people are hit and miss, sometimes coming across a little too strained and waifish, overall McConnell’s style is dynamic and interesting, matching and enhancing the flow of Hennessey’s script with energetic linework and densely packed layouts.

For sources and further reading, Hennessey directs the reader to the book’s website, and while it’s a little annoying not to be able to flip to the footnote you want while actually reading, the notes themselves (proceeding panel by panel) are pretty thorough. Hennessey has done his research, and with the breadth and depth of information that comes across in this short comic, it really shows.

Speaking as a Canadian who only got the broad strokes of American history in school, the educational factor of the book still seems like it would be relatively high for someone with a better background in the subject. The diversity of subject matter in effect keeps the book from becoming a cut-and-dry basic history, making it suitable for a broad audience. The book’s strength is its fixation on complexities and confusions, its avoidance of pat explanations, and for anybody who ever had the impression that the Civil War was a stark matter, this adaptation should be a powerful tonic. And at a more basic level, it’s just good comics, deftly constructed and maintaining an engaging balance between textual and visual information.

“The Gettysburg Address: A Graphic Adaptation” is available in paperback from HarperCollins.