Welcome back, manga fans! Since Previews has a section of the catalog dedicated to manga, we’ll be highlighting that section’s most notable upcoming releases every month. Read on to see what stuck out to us! 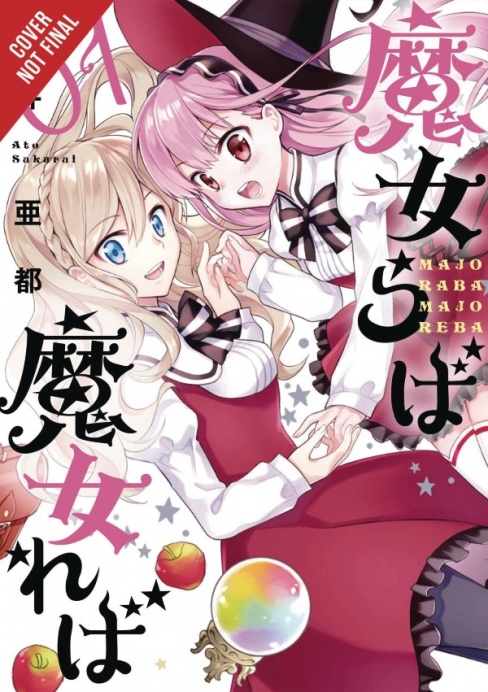 Cross-dressing, witches, life-or-death situations, exams, and romance? Must be another manga from Yen Press! I’ve made no secret of the fact that this isn’t exactly my preferred type of manga, but if that’s you, all the more power to ya!

If Witch, Then Which? volume 1
Written and Illustrated by Ato Sakurai
Published by Yen Press
Haruka Kuse sees Maruna Rinjou as his savior-he owes his life to her blood transfusion, after all. But what he never knew is that she’s actually a witch! Haruka wants to repay the favor somehow, and the answer is…crossdressing to help Maruna pass her magic exams?! Ato Sakurai, author of Today’s Cerberus, brings a fiery new magical romance! 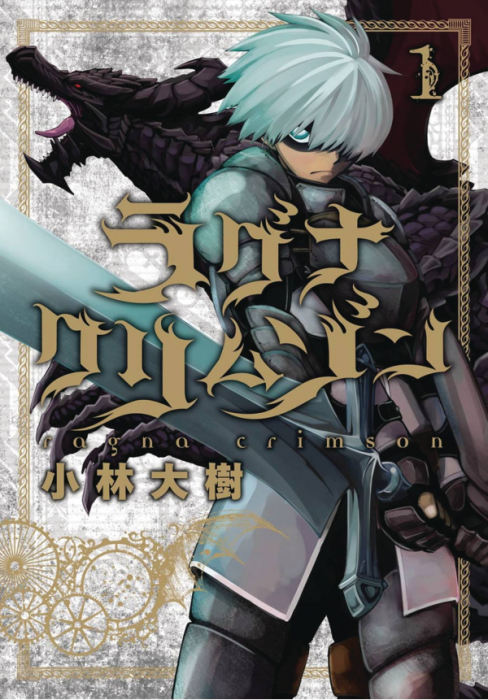 Yeah, as with the last book, dark fantasy action isn’t my cuppa, but I’m sure this book will appeal to a large contingent of American manga readers. Also cool to see Square Enix releasing more books!

Ragna Crimson, volume 1
Written and Illustrated by Daki Kobayashi
Published by Square Enix Manga
In this action-packed dark fantasy, humanity lives under the threat of annihilation by immensely powerful dragons. In a world where dragons rule sky, sea, and land, those who would fight them and win must surpass the limits of normal human strength. Dragon hunters: warriors armed with special silver weapons who kill their prey for bounty. Lowest among their ranks is Ragna, who forms an improbable partnership with the young genius Leonica, a master dragon slayer with more kills to her name than almost any other. All Ragna wants is to stay by Leonica’s side, but his dream is shattered by an attack from the deadliest dragon imaginable! 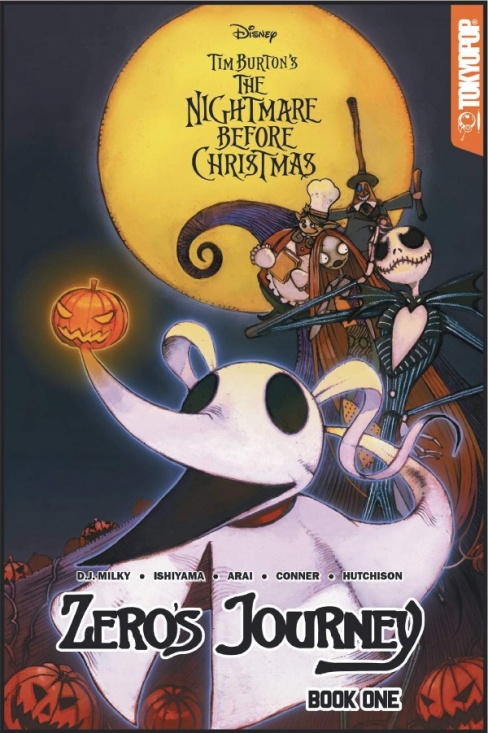 This manga, a book by Japanese creators based on an American property, has been released in 20 full-color single issues, then four full-color trade paperbacks. Now, it’s being released as one complete black and white book. That’s a pretty cool, if confusing, publishing strategy from Tokyopop, who I don’t think I’ll ever fully understand. I hope this volume brings fans of Nightmare Before Christmas to manga!

The Nightmare Before Christmas: Zero’s Journey, Ultimate Edition
Written and Illustrated by DJ Milky
Published by Tokyopop
Jack Skellington is the undisputed Pumpkin King of Halloween Town and creative genius behind the most spooktacular scares. Beside him through every great new creepy concept is his ever-faithful ghost pup, Zero. Finding himself lost in a curious land of baked goods, hand-wrapped presents, decorated trees, and joyful caroling, Zero must traverse the unfamiliar world of Christmas Town to find his way home!
This deluxe collectors’ edition combines the entire Zero’s Journey series into one book and re-releases it in a traditional manga format!
Exclusive Laminated Softcover at a large premium collectors’ edition size!
Art reimagined by Kei Ishiyama, the original storyboard artist for the original series!
The Bookscan-Ranked Hit and beloved by librarians and Tim Burton fans!
Never-before-published cover illustration by Kiyoshi Arai, the original cover artist for the original series! 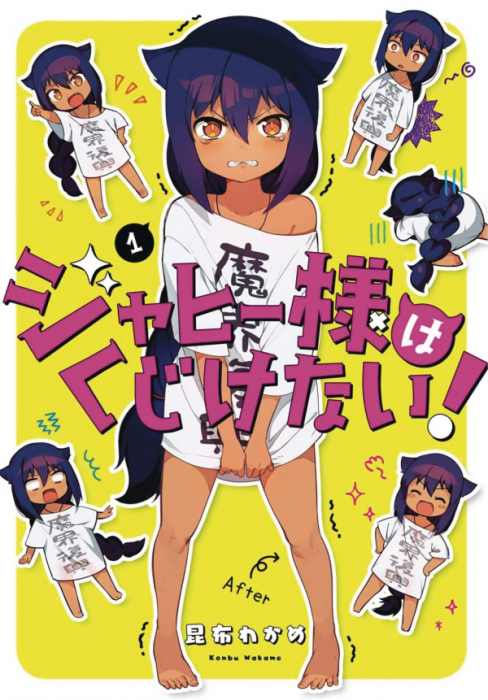 Incorporating slice-of-life comedic aspects into a dark fantasy concept is one of the few ways you can get me to read a dark fantasy. This sounds similar to “Curse Words,” which I enjoyed at the start, so maybe this will push those same buttons!

Great Jahy Will Not Be Defeated, volume 1
Written and Illustrated by Wakame Konbu
Published by Square Enix Manga
Puny and powerless after an unfortunate encounter with a magical girl, the Dark Realm’s Number Two has her work cut out for her in the world of humans! The Great Jahy, the Dark Realm’s second-in-command, cuts a frightening figure, feared and revered by all. But when a run-in with a magical girl results in the destruction of the precious mana crystal, the Dark Realm falls, transporting the newly puny and powerless Jahy to the human world! Unfortunately, plotting the revival of the Dark Realm from a cramped, crumbling one-room apartment is no easy feat when you have rent to pay and a job to keep! 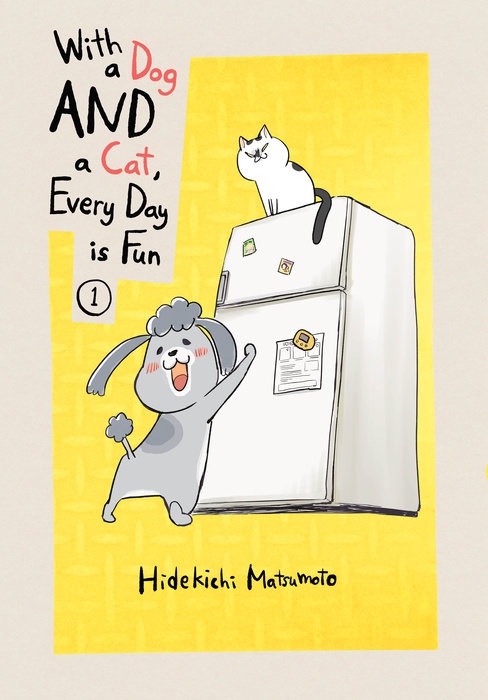 Time for the month’s obligatory pet-themed manga. But unlike all the ones before, this one isn’t about a cat or a dog… it’s about both! If the title is to be believed, the book should be a fun ride.

With a Dog AND a Cat, Every Day is Fun, volume 1
Written by Kouei Matsumoto
Illustrated by Hidekichi Matsumoto
Published by Vertical Comics
Are you a dog person? Or maybe a cat person? Or maybe both??
Based on author Hidekichi Matsumoto’s real life experience, she shows us what it’s like to live with both a dog and a cat!
Mangaka Hidekichi Matsumoto lives with both a dog and a cat.
Her dog is cute, innocent and full of joy! The cat on the other hand has a scary face, aloof and a master thief.
Every day life in a multi animal household is fun and filled with laughter and tears….
Here’s a new type of manga for both dog and cat lovers alike! 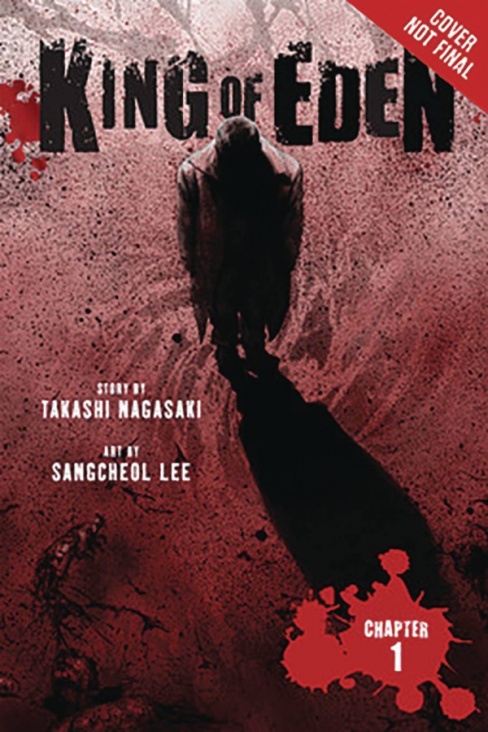 Korean manhwa doesn’t have a very strong foothold here in the States, so it’s always nice to see more being published here. This dark drama sounds perfect for the fans of prestige dramas that dominate the streaming landscape right now.

King of Eden, volume 1
Written by Takashi Nagasaki
Illustrated by SangCheol Lee
Published by Yen Press
A remote village massacred in Andalusia. A single man apprehended wading through the aftermath. But the killer they’ve brought down from the mountains is entirely impossible for them to contain…
The world has been stained by blood before. So it shall be again. 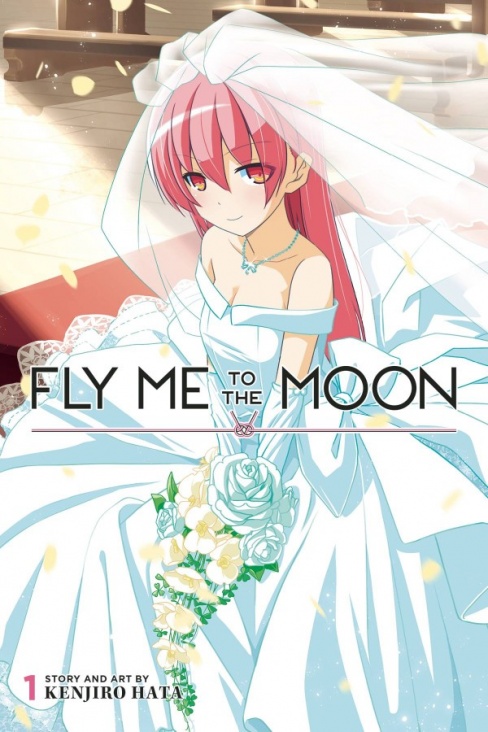 A lot of manga covers simply get the job done, so it’s rare for one to stick out to me. This one did. The concept sounds very shonen — Astronaut! Weird girl with powers! Romance! Parental angst! — but it’s just the right mix of strange concepts to intrigue me.

Fly Me to the Moon, volume 1
Written and Illustrated by Kenjiro Hata
Published by Viz Media
From the day his parents named him, Nasa Yuzaki has been destined for outer space…or so he believes. But while trying to join the space program, he is thrown for a loop when an accident introduces him to Tsukasa, a mysterious girl with strange powers. Is she an alien, a moon goddess or something else? Since she insists on marrying him, Nasa has plenty of chances to find out! 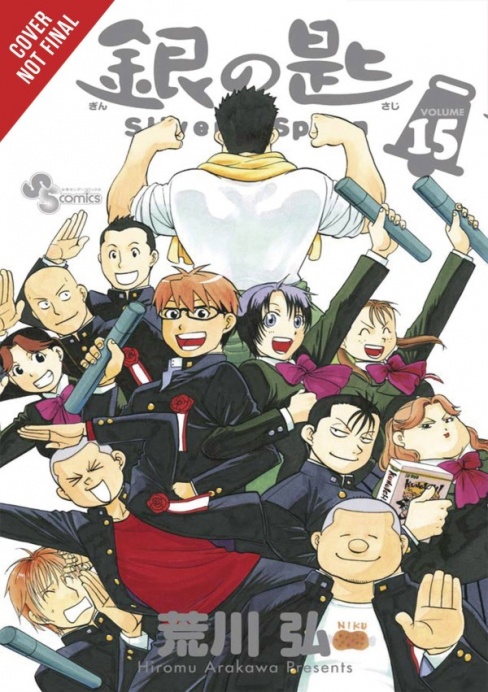 “Silver Spoon” is Hiromu Arakawa’s longest-running manga after “Fullmetal Alchemist” and the only current series that she’s both writing and drawing. So it’s a big deal that she decided to wrap the series up! While I’ve only read the first volume of this series, I did love it, and its longevity and anime adaptation are a testament to its quality. Goodbye, “Silver Spoon.” Excited to see what Arakawa does next!

Silver Spoon, volume 15
Written and Illustrated by Hiromu Arakawa
Published by Yen Press
Hachiken’s time at Ezo Ag has flown by so much faster than he could have ever imagined. Having grown, matured, and learned so much, he’s finally ready to face his road ahead. With the support of friends, and eventually family, Hachiken charges forward! It’s the final volume of Silver Spoon!

2. How transferable is YOUR experience? 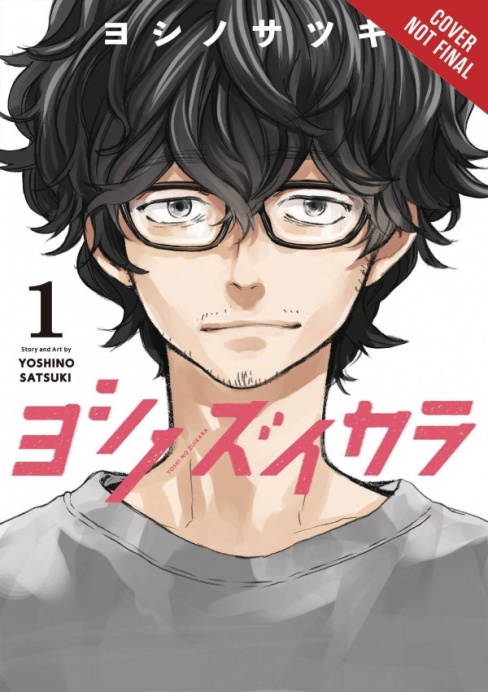 “Barakamon” is one of those series I’ve always wanted to give a shot, so I may start with Yoshino’s new series instead. This looks like a ton of fun, following a mangaka’s struggles with trying out a different genre. I think that’s something any writer or creative can relate to, and it sounds like it has the potential to join the ranks of “Blank Canvas,” “Bakuman,” and “Downfall” as one of the great mangas about mangaka!

Yoshi no Zuikara volume 1 Well Does Not Know Ocean
Written and Illustrated by Satsuki Yoshino
Published by Yen Press
A new story about one man’s creative struggles arrives courtesy of Satsuki Yoshino, author of Barakamon! Can a ten-year manga artist with experience only in the fantasy genre pivot to drawing a down-to-Earth story about regular folks? It’s sink-or-swim for Naruhiko Toono and his career!

1. Inject it into my VEINS. 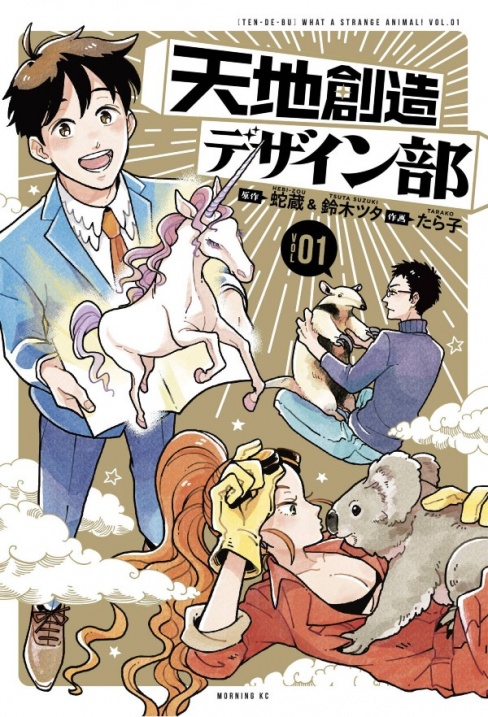 This solicit is really doing the Lord’s work, pun fully intended. What an absolute joy of a concept: the team in Heaven who are responsible for designing animals, presented in an edutainment way similar to “Cells at Work.” Prototyping and testing? A character who “just wants to make everything look like a horse”?? Yeah, this is the kind of thing you’d only find in a manga.

Heaven’s Design Team, volume 1
Written by Hebi-Zou and Tsuta Suzuki
Illustrated by Tarako
Published by Kodansha Comics
God created the heavens and the Earth — but, little-known fact, he outsourced the animals to the office of Heaven’s Design Team! This hilarious and educational manga features weird real-life animals and puts even some humdrum critters in a strange new light.
On the seventh day, God rested. But it turns out He started getting tired long before… In fact, when it came time to design the animals, God contracted the whole thing out to an agency… Heaven’s Design Team! They love their work — the giraffe, the koala, the ping-pong tree sponge(?!) — but their divine client’s demands are often vague, and the results are sometimes wild in more ways than one. Then there’s prototyping and testing to worry about, not to mention Ms. Pluto’s penchant for grotesque and Mr. Saturn, who just wants to make everything look like a horse… But in the end, all creatures great and small get their due!
Includes photos and educational information about the REAL animals created in this volume… Giraffe, Red-eyed tree frog, Koala, Horsehair worm, Armadillo, Anteater, Sea cucumber, American red deer, Fiddler crab, Narwhal, Sperm whale, Giant squid, Seahorse, and many more!
A digital-first hit for Kodansha. Surprising, educational facts makes this a spiritual successor to Kodansha hit Cells at Work! Each chapter ends with photos of the real animals featured in the story.

Thanks for reading. This is my final Soliciting Manga column, but it’s been a joy covering these for the last two years. Make sure to check back next month, though, as the column will be continuing on in someone else’s hands. See ya around! 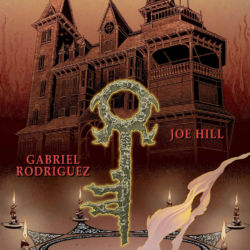 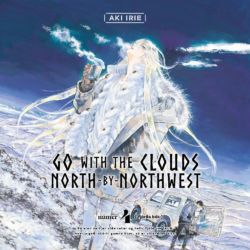 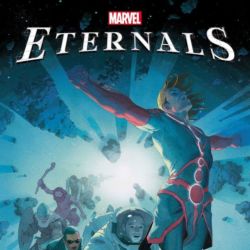