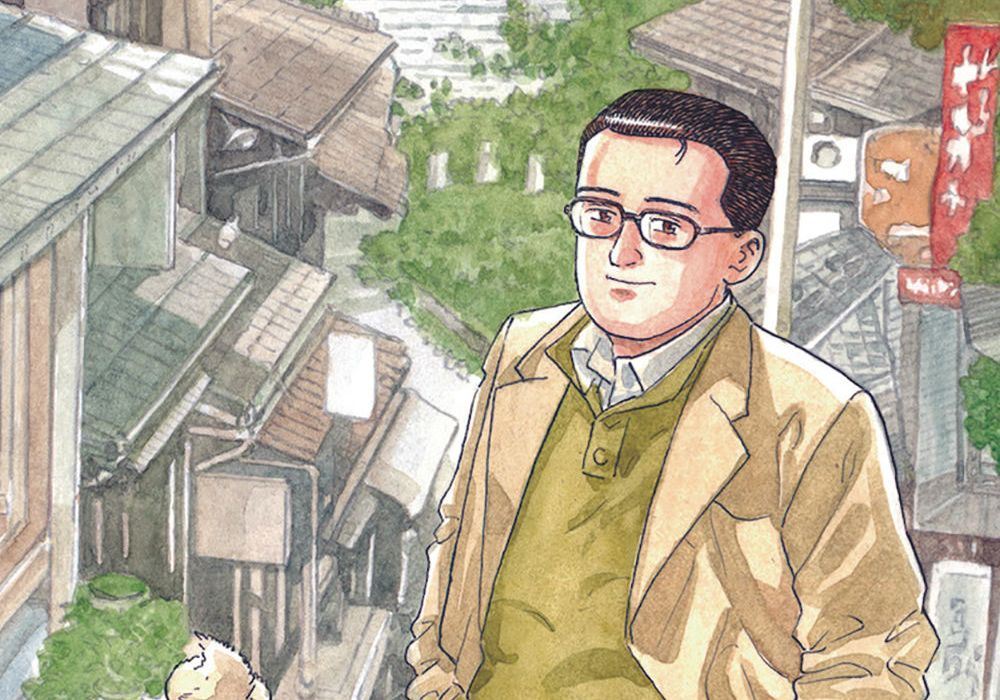 Welcome back, manga fans! Last month was pretty packed, so the manga solicits were a little light this month. Still, we found 10 interesting things to spotlight. Read on to see what stuck out! 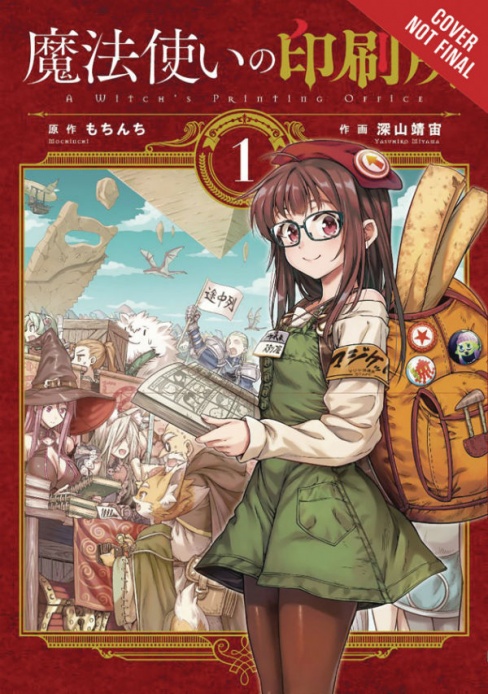 In the world of manga in Japan’s, a book needs a clear and unique hook to set it apart from everything else in its genre. In this case, I appreciate this blend of magic and books, and this take on the concept seems pretty new. I think it has a chance of standing out, even in America.

Witch’s Printing Office, volume 1
Written by Mochinchi
Illustrated by Yasuhiro Miyama
Published by Yen Press
Mika Kamiya was a completely average girl on her way back home from Japan’s biggest amateur comics and book-selling event, Comic Market…until she got whisked off to a parallel fantasy world! To get back home, Mika is going to have to look for transportation magic at the magic tome-selling event, Magic Market! 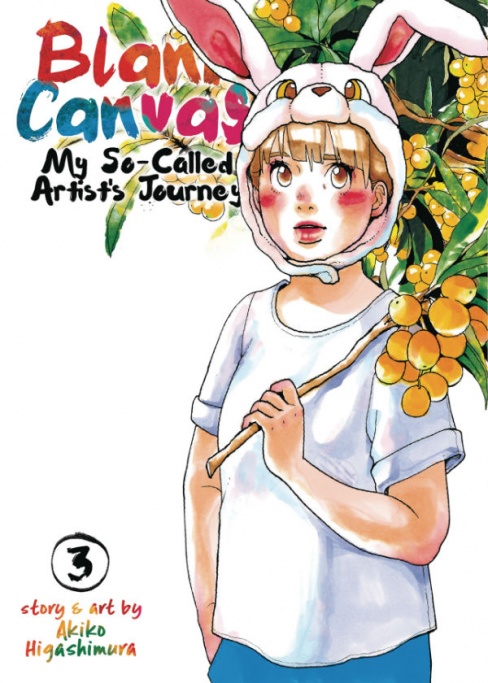 I read the first volume of this series a few weeks ago and it’s still sticking with me. Higashimura tells the story of her creative journey in a way that’s at once engaging and relatable, and yet wholly specific to her experiences. I was awed at her deft switching between light comedy, personal difficulties, and deep nostalgia, and I can’t wait to read more of her story.

Blank Canvas: My So-Called Artist’s Journey, volume 3
Written and Illustrated by Akiko Higashimura
Published by Seven Seas Entertainment
The award-winning autobiographical manga Kakukaku Shikajika by Akiko Higashimura, the creator of Princess Jellyfish, about her high school dream to become a comic book creator! High schooler Akiko has big plans to become a popular mangaka before she even graduates, but she needs to get much better at drawing if she ever wants to reach her goal. Looking for an easy fix, she signs up for an art class, thinking all her problems will soon be solved. She’s in for a surprise: her new instructor is a sword-wielding taskmaster who doesn’t care about manga one bit. But maybe this unconventional art teacher is just what she needs to realize her dreams! 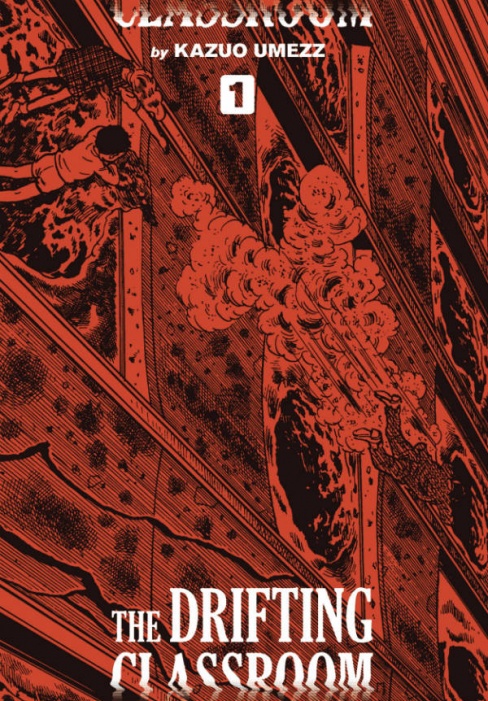 Following the trends in the other areas of the American comics market, the bigger manga companies have recently been re-releasing their more popular series in larger “special edition” hardcovers. “The Drifting Classroom” is one of the few 70s manga to still have some cache in the US, so it’s not surprising to see it reprinted, although it is a little surprising to see it in this deluxe format. Regardless, I’m excited to try it out!

The Drifting Classroom, Perfect Edition HC volume 1
Written and Illustrated by Kazuo Umezz
Published by Viz Media
Out of nowhere, an entire school vanishes, leaving nothing but a hole in the ground. While parents mourn and authorities investigate, the students and teachers find themselves not dead but stranded in a terrifying wasteland where they must fight to survive. 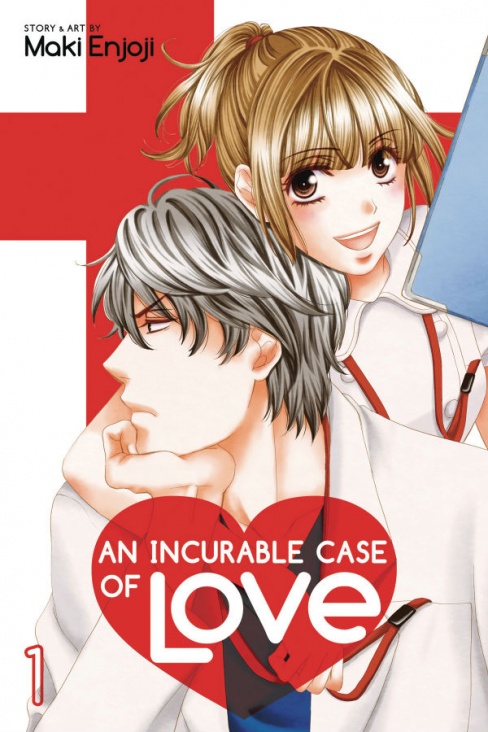 Shojo Beat, the female-geared equivalent of Shonen Jump, has always been one of the more neglected imprints at Viz. So much goes into the Shonen Jump and Viz Signature lines that we don’t often see new Shojo Beat books, and when we do, they’re usually in the fantasy realm. So I think it’s significant to see a new romance manga! Not sure if I’ll pick it up, but I’m sure there is someone out there who is ecstatic about this.

An Incurable Case of Love, volume 1
Written and Illustrated by Maki Enjoji
Published by Viz Media
After witnessing a handsome and charming young doctor saving a stranger’s life five years ago, Nanase Sakura trained to become a nurse. But when she meets the doctor again and they start working together, she finds Kairi Tendo to be nothing like the man she imagined him to be! 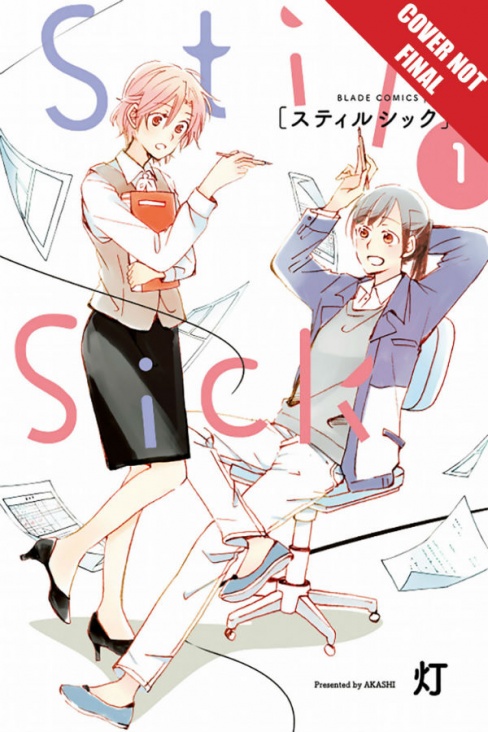 I never know what Tokyopop is doing, and I mean that in the best possible way. A company that topped the American manga market a little over a decade ago is now primarily putting out Disney tie-in manga, the occasional reprint of an older series like “Aria,” and… LGBT romance books? I’ll always support LGBT material, but I have to wonder how they arrived at this publishing slate.

Anyways, this book looks fun. It seems like a new take on the typical girl-meets-girl story combined with story beats about the specific niche of the manga world that the story is being told in. Like a lesbian “Bakuman.” And who can say no to that description?

Still Sick, volume 1
Written and Illustrated by Akashi
Published by Tokyopop
Makoto Shimizu is just an ordinary office worker, blending in seamlessly with her colleagues on the job… that is, until her coworker Akane Maekawa discovers her well-hidden secret: in her spare time, she draws and sells girls’ love comics!
Akane is the last person Makoto would think of as a nerd, but as her interest in Shimizu’s art blossoms and the two grow closer, it’s starting to seem like Akane may have a secret of her own…

5. That information is only for me and my dumbbells to know. 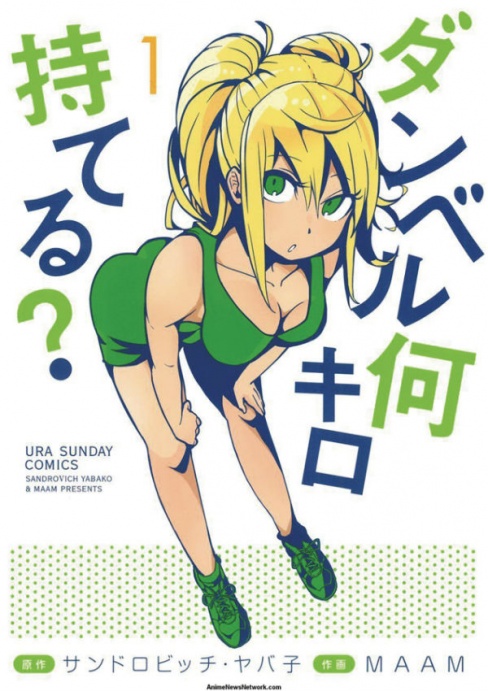 On one hand, that description seems like your stock sports manga. On the other hand, I love how strangely playful that title is, like a botched translation of “What do you lift, bro?” And it has an anime adaptation!

How Heavy Are the Dumbbells You Lift?, volume 1
Written by Sandrovich Yabako
Illustrated by MAAM
Published by Seven Seas Entertainment
The manga that inspired the new anime: a series about beautiful girls getting buff! Sakura is a teenage girl who loves to eat, but when she notices her waistline expanding, she decides to check out the local gym. The gym is full of buff dudes…and Akemi, the student council president?! When Akemi tries to convince Sakura to take up weight training, Sakura resists, until she meets pretty-boy trainer Machio. Now, Sakura is willing to do whatever it takes to bulk up! 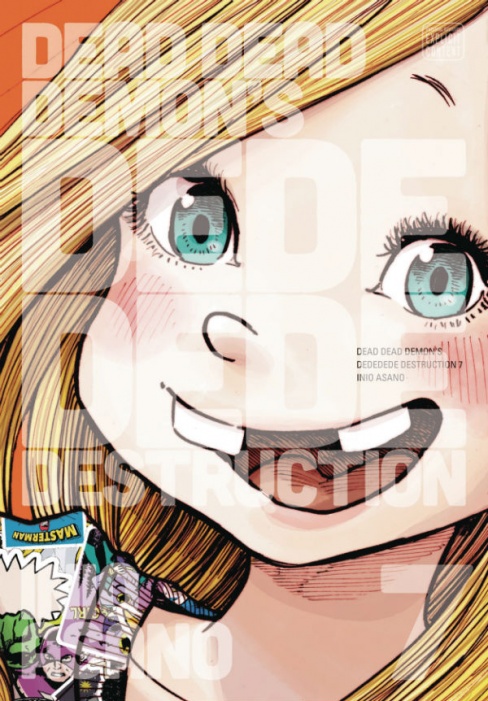 One of the greatest comics coming out right now, bar none. An absolutely harrowing view of the most pressing issues of today, made all the more terrifying by depicting it from the ground-level subtleties of ordinary citizens’ lives. War profiteering, wholesale murder resulting from xenophobia, the normalization of extreme violence against innocents and the tensions that arise from it. This series really snuck up on me — I was always enjoying it, but during this last volume I had a sudden “Holy shit, this is bleak” moment. And it’s a bleakness only Asano can depict this well.

Dead Dead Demon’s Dededede Destruction, volume 7
Written and Illustrated by Inio Asano
Published by Viz Media
International relations are crumbling as the hotheaded American president demands that the Japanese government share what they know about Invader technology. But the Japanese prime minister has more important things to think about than diplomacy-he wants to make sure his favorite idol is in the bunker with him when the mother ship blows.
Meanwhile, the Occult Club is taking a trip to the seashore to meet with someone who claims to have had an extraterrestrial experience! The silly lark ends up revealing something shocking about Oran’s past, but at least the scenery is lovely! 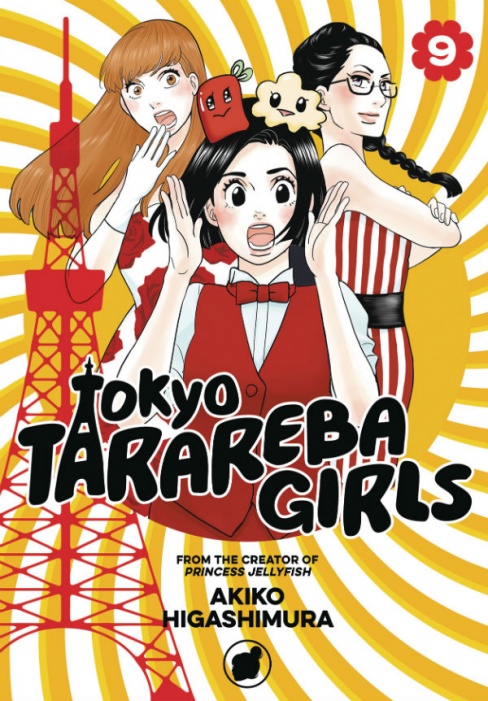 Any American who knows about manga understands two things: 1) manga tend to run long, and 2) if it’s not a shonen action series, there’s a chance the entire series might never get translated. That said, I think it’s impressive that an entire nine-volume series by Akiko Higashimura (the mangaka responsible for “Blank Canvas” and the successful, long-running “Princess Jellyfish”) has completed translations here. She usually works for the Josei demographic, which is directed primarily at adult women, and which is pretty small in Japan and miniscule in the US. I’m glad she’s found an audience, and with this achievement and my enjoyment of “Blank Canvas,” I definitely plan to check this series out soon!

Tokyo Tarabera Girls, volume 9
Written and Illustrated by Akiko Higashimura
Published by Kodansha Comics
“I spent all my time wondering ‘What if?’ Then one day I woke up and I was 33.” Rinko has hustled her whole life, but one day she wakes up and finds herself a writer of a cheap online soap opera with only two friends (with whom she goes drinking most nights). In a booze-fueled delusion, she swears to get married by the time the Tokyo Olympics roll around in 2020, but it’s not going to be a straight line… and there won’t be any fairy tale endings! 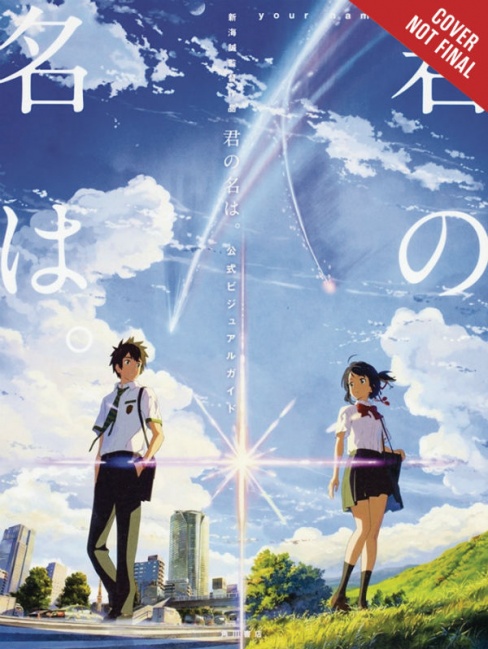 Okay, so it’s not exactly a manga, but anyone interested in manga is at least familiar with “Your Name.” The movie was easily one of the most visually stunning things I’ve ever seen — a sentiment echoed among pretty much anyone who’s seen it. If any movie deserves an art book, it’s this one.

Your Name: The Official Visual Guide
Written and Illustrated by Makoto Shinkai
Published by Yen Press
This story guide for Makoto Shinkai’s hit “Your Name.” features beautiful scenes from the film, along with background art, character and concept art, storyboards, and a variety of exclusive interviews from the people who brought Mitsuha and Taki’s story to life! 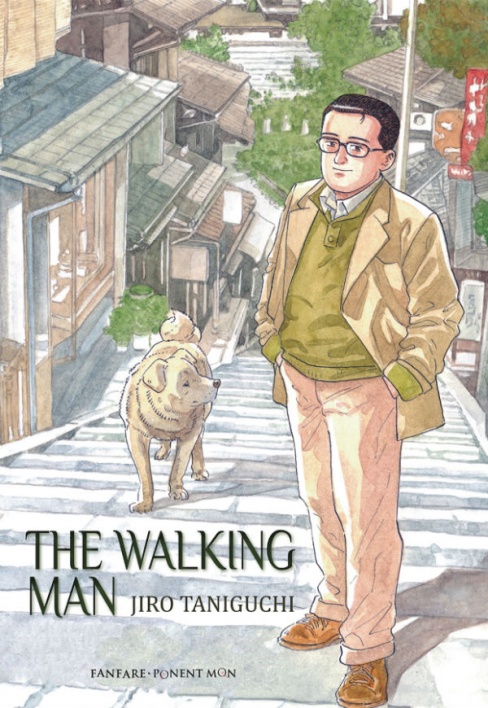 There’s something about Jiro Taniguchi’s art — the architecture, the detail, his focus on the small, quiet moments — that sets it apart in a class all its own. This book is frequently referred to as “a day in the life of Clark Kent,” and it’s a series of quiet moments of a good man and his dog walking around and gently helping people in need. I don’t exactly know why it’s considered the 10th anniversary edition (it was originally published in 1992 and the first English translation was circa 2006), but this looks to be the best available version of the book. I’m excited to sit down, relax, and experience this gentle tale.

The Walking Man: 10th Anniversary Edition HC
Written and Illustrated by Jiro Taniguchi
Published by Fanfare Presents Potent Mon
Taniguchi’s iconic tales of a meandering Japanese business man who strolls at random through urban Japan, often silent, usually alone, with his vivid dreams that let time stand still. Join him as he takes time out to observe the birds, climbs a tree in bare feet, plays in puddles after the rain and returns a shell to the sea. A book in which nothing happens but everything occurs. Now presented in the original Japanese sense of reading out of respect for Taniguchi’s wishes. Four additional independent short stories have been added and also 28 pages in color have been included where they existed in the original material. All bound up in a hardcover worthy of this iconic work. 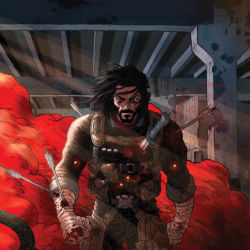 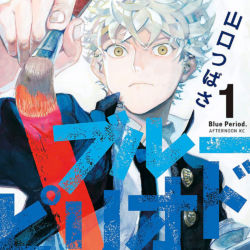 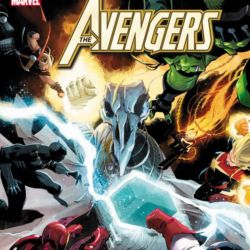