We’ve got some comics and runs coming to an end, and sadly, other comics have already vanished by this point. I’ll miss “Gwenpool,” but we still have quite the selection of other comics to look at, including a whole lot of Venom’s greatest hits. So let’s see what awaits in March:

10. The Merc Versus the Captain 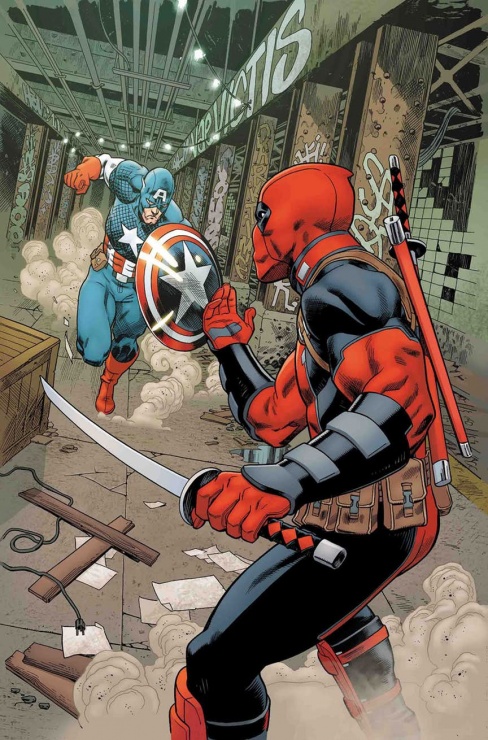 The never-ending mix of slapstick and drama that is “Deadpool” continues. Gerry Duggan has made this run a fantastic look into the character while still providing the wisecracking nonsense that we’ve come to expect, and now he’s sending Deadpool on a mission to make someone pay for “Secret Empire” (because let’s face it, someone has to), no matter which Cap it is. 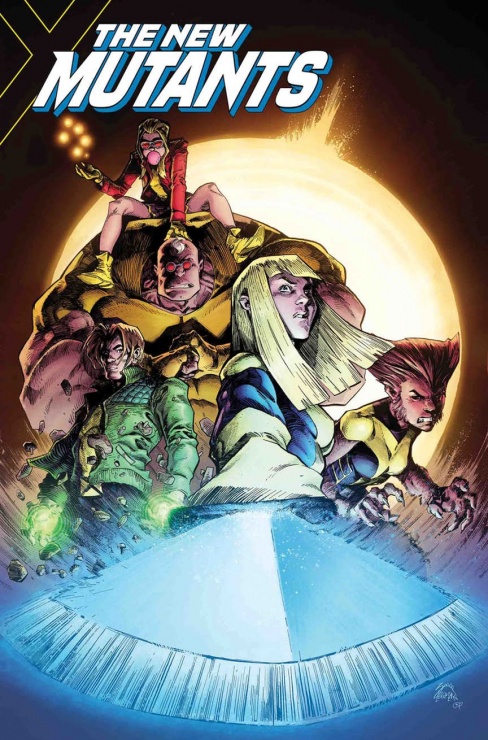 Hey, isn’t there a “New Mutants” movie coming out? I wonder if that has anything to do with this comic… of course it does, but hey, if it gives us more of the under-utilized mutants, I’m all for it. (Especially Boom-Boom, mostly because of “Nextwave,” which you need to read if you haven’t yet.) It sounds like it’ll be a comic more on the dark side, which matches the tone of the upcoming film, so we’ll see how it suits the comic.

• Dead Souls Part 1
• THEY AREN’T JUST THE X-MEN IN TRAINING ANYMORE!
• The New Mutants are launching themselves headfirst into some of the creepiest corners of the Marvel Universe, going on the missions no one else will. But does the team know what they are really hunting for? And what are they willing to do to get it? The enigmatic MAGIK will lead her team of WOLFSBANE, RICTOR, BOOM-BOOM and STRONG GUY and bring them face-to-face with paranormal threats that they may not be prepared for, and that might just tear them apart! Rising-star writer Matthew Rosenberg (PHOENIX RESURRECTION) teams up with future superstars Adam Gorham and Michael Garland (ROCKET) to bring you the next chapter in the lives of Marvel’s underdog team. Welcome to the new class of New Mutants — hope you make it out alive.
• 32 PGS./Rated T+ …$3.99

8. It’s Not Easy Being Green (Goblin) 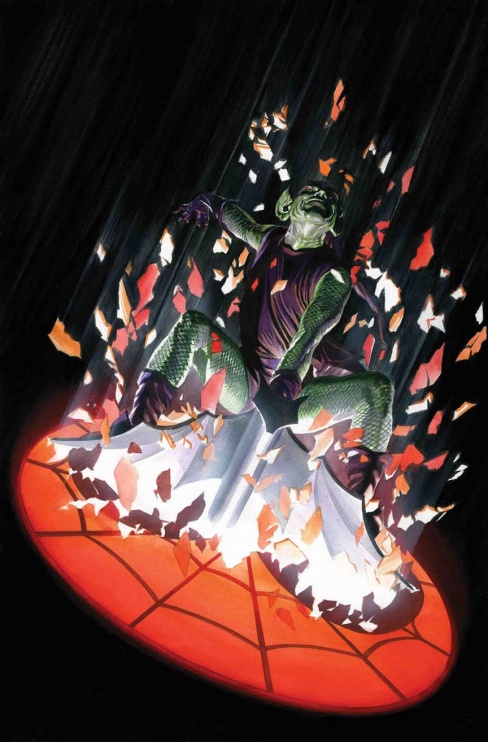 The Green Goblin’s return has been a long time coming, and now we’re finally going to get it. This is Dan Slott’s last run for the “Amazing Spider-Man” comic, so let’s hope he saved the best for last. In addition, the promise of a new Goblin character is intriguing; we can start betting on who it’s going to be now,

• GO DOWN SWINGING Part 1
• The Green Goblin is back — and scarier than ever! Dan Slott has saved his most harrowing Spider-Man story for last as he and Stuart Immonen kick off the AMAZING SPIDER-MAN story ten years in the making. Osborn got his crazy back and has a plan that’ll make all his past plans look like child’s play. Peter Parker and the people he loves (ALL of them) are in deep trouble. And who or what is the RED GOBLIN?! The only way Spider-Man survives is to GO DOWN SWINGING!
• 32 PGS./Rated T …$3.99 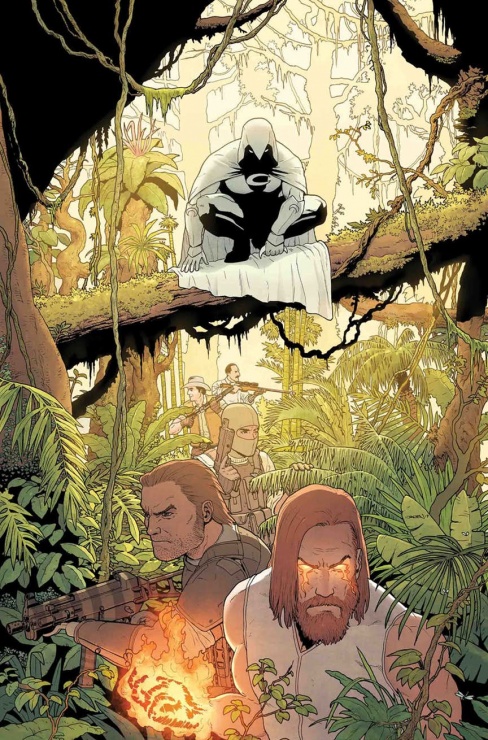 It’s good to have “Moon Knight” back. The revival of the comic is off to a good start, with a nice pace and a dark but engaging tone, and its new arc is coming to an end. Sun King versus Moon Knight, that certainly sounds like a fitting showdown, let’s see if it can get the momentum it needs to make this an arc to remember.

• CRAZY RUNS IN THE FAMILY Part 6
• Two avatars enter the jungle, only one will leave! The Sun King’s ritual of ascendance is prepared. But Moon Knight won’t go gentle.
• 32 PGS./Rated T+ …$3.99 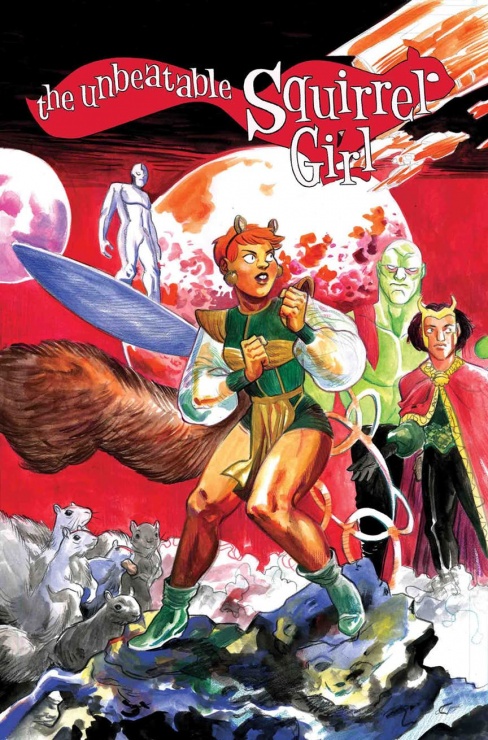 I mean… just read the solicit. I’ve said before that this comic embraces all the wildest, most fantastic elements of Marvel comics, and if there’s anything that proves that point, it’s this solicit. A planet of squirrels, an array of mystical and cosmic characters, and the chance of a Horse Thor (which is either Beta Ray Bill or something even crazier). There’s nothing more I can say, I just love this comic.

(And following a Twitter exchange, @unbeatablesg now knows that the “Squirrel Girl” comic is always included on these lists, so… Hi, Doreen!)

• It’s the climax (IN SPACE!) of our story as Squirrel Girl (IN SPACE!) faces off against an alien armada (IN SPACE; YES, THIS IS ALSO IN SPACE; THE WHOLE STORY IS IN SPACE!). Not just her life hangs in the balance, but also the lives of Tippy, Nancy, Loki, Drax, the Silver Surfer AND an entire planet full of squirrels, so if you believe that stakes can be raised simply by adding more characters into the mix, GOOD NEWS: YOU ARE IN LUCK! Will Squirrel Girl survive? Will the alien grifters be brought to justice? Will we see more of Horse Thor, The Thor Who Is Actually A Horse And Who May Have Been Invented Solely For This Solicit Text But Maybe Not? Only time, and this comic in particular, will tell!
• 32 PGS./Rated T …$3.99 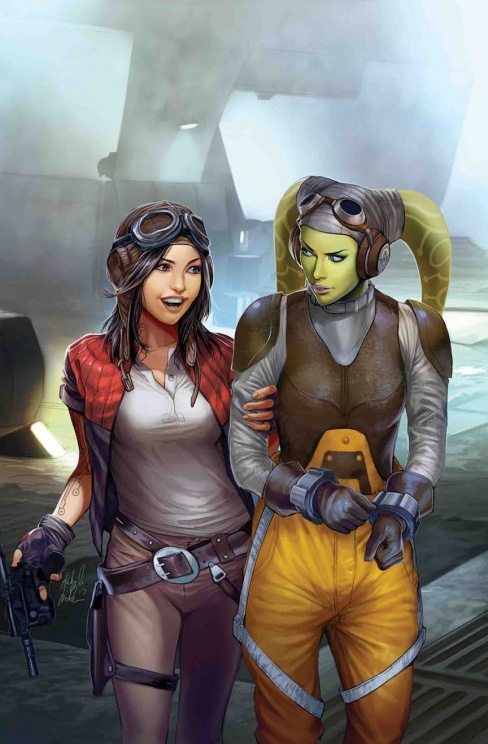 Kieron Gillen continues to do fantastic work with Doctor Aphra, making her a welcome part of the Star Wars universe. Now he’s bringing in another one of the more welcome additions in recent years: Star Wars: Rebels and Hera Syndulla. It’s always nice to see Rebels get involved in the larger story, and “Doctor Aphra” is a great choice for it. I look forward to seeing how these two fantastic characters interact.

• “REMASTERED” CONTINUES!
• Doctor Aphra is being blackmailed by Triple-Zero to run missions for his underground crime syndicate — but that doesn’t mean she can’t cause trouble and have fun along the way! Sometimes that fun means infiltrating Rebellion training grounds…and sometimes that trouble means crossing paths with famed rebel Hera Syndulla herself!
• 32 PGS./Rated T …$3.99 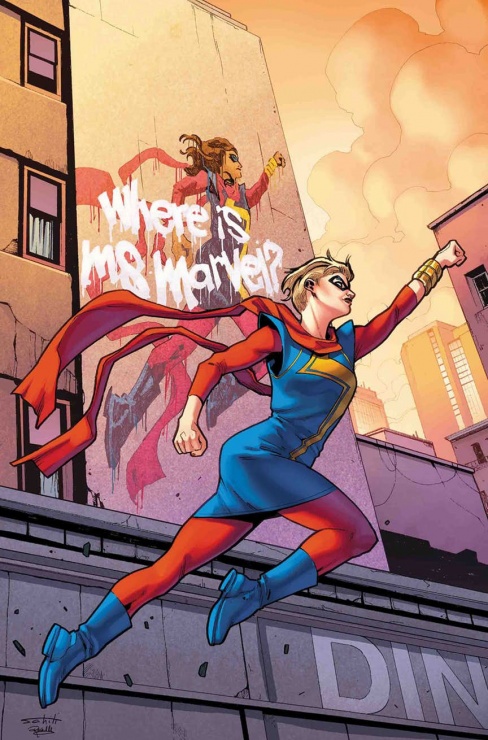 The emotional roller coaster ride that is “Ms. Marvel” continues. Kamala and Carol haven’t exactly been on the best of terms after the events of “Civil War II” (which wasn’t the best of comics either), but it seems the original Ms. Marvel (now Captain) is ready to help. We all know how Carol has inspired and influenced Kamala, but now we can see how it worked in the other direction, and finally get answers as to what Kamala has been doing these past few issues.

• TEENAGE WASTELAND PART 4
• MS. MARVEL’s friends reach out for help… and CAROL DANVERS (A.K.A. CAPTAIN MARVEL) answers the call! But has the INVENTOR’s scheme gone too far to be stopped?! And yes: The Mystery of Kamala Khan REVEALED!
• 32 PGS./Rated T+ …$3.99

3. Back in the Quiver 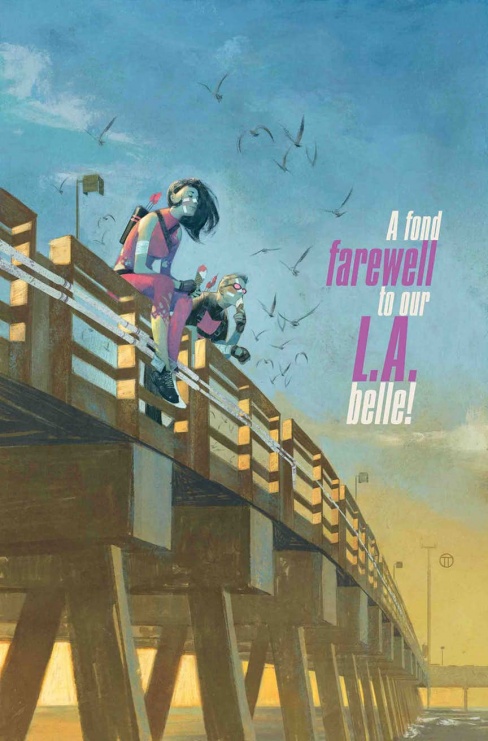 Is this truly the end for “Hawkeye?” It seems that way.
… The comic, I mean, not the character. Neither Hawkeye will be dying any time soon, but Kelly Thompson’s enjoyable run is coming to an end, so it may be some time before we get another solo run. Here’s hoping that this issue brings everything to a satisfying conclusion, and leaves us wanting more from Kate and Clint.

• As Madame Masque, Eden and a crew of misfit villains take on Hawkeye and Hawkeye with renewed vengeance, our heroes dig deep into themselves to solve the unique challenges they face. Arrows can’t solve EVERYTHING, it seems. Who knew?! When the dust settles, what will the future hold for the two Hawkeyes?
• 32 PGS./Rated T+ …$3.99 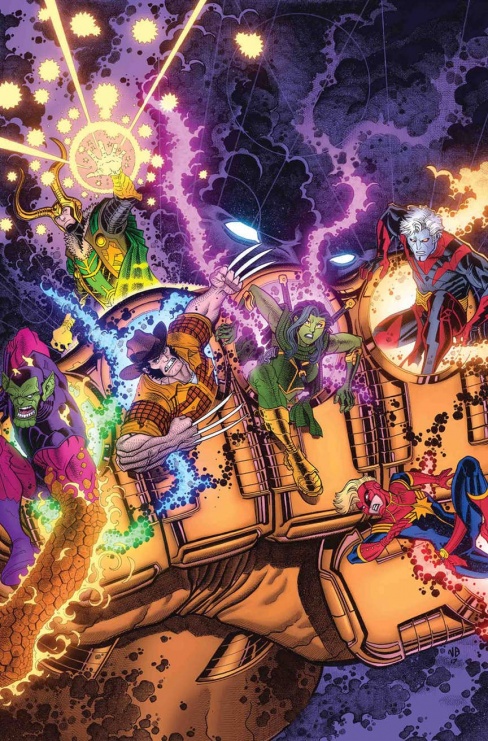 The Infinity Stones have been reappearing throughout various Marvel comics, most prominently in “Guardians of the Galaxy.” Naturally, that’s all been building up to something, and now we get to see what, or at least the countdown to it. Of course, I’ll read anything written by Gerry Duggan, so this event is very safe in his hands.

• Infinity Countdown Part 1
• The Saga of the Infinity Stones begins!
• As the Infinity Stones reappear around the cosmos, the ultimate race for power is on!! Battles will be fought, blood will be spilled, lives will be lost… all as the greatest cosmic heroes and villains vie for possession of the Power Stone, towering over a remote asteroid, somehow grown to the size of a building. Watch as the path to Infinity opens before your eyes and the END lies near…
• 40 PGS./Rated T+ …$4.99 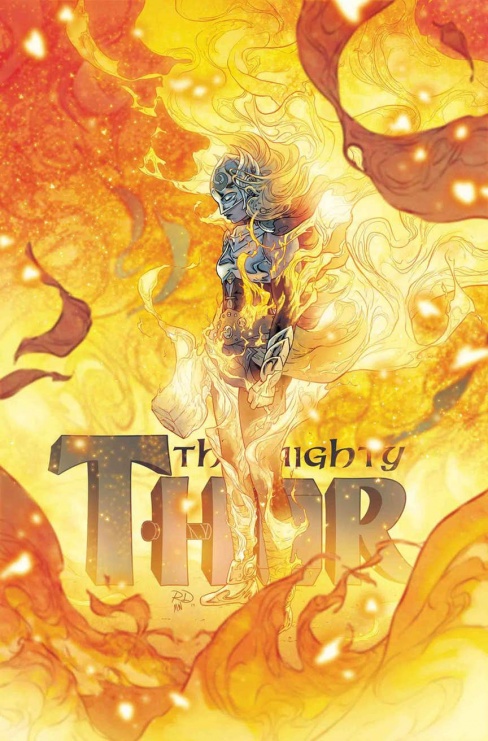 All good things must come to an end, and that includes great comics. Jason Aaron’s run on “Mighty Thor” has definitely been one of the most engaging and well-written comics coming out of Marvel these days, but he’s been building up to an epic conclusion, and the grand finale is now at hand. No matter how it goes down, it’ll be a comic that’s not to be missed.

• THE DEATH OF THE MIGHTY THOR Part 6
• The epic showdown years in the making finally explodes across the heavens. Thor battles the unstoppable Mangog, with the fate of all Asgardia hanging in the balance. Is Thor willing to pay the ultimate price in order to save the gods? The tragic and heroic story of Jane Foster finally reaches its heart-rending zenith. You knew it was coming. The Death of Thor is here at last.
• 32 PGS./Rated T+ …$3.99