Welcome back, one and all, to the wonderous, fabulous, stupendous Soliciting Multiversity! The time around we’ll be looking into the far flung future of… April! We’ll be taking a look at what Image has in store for us in April here so without further ado, let’s just get right to it! 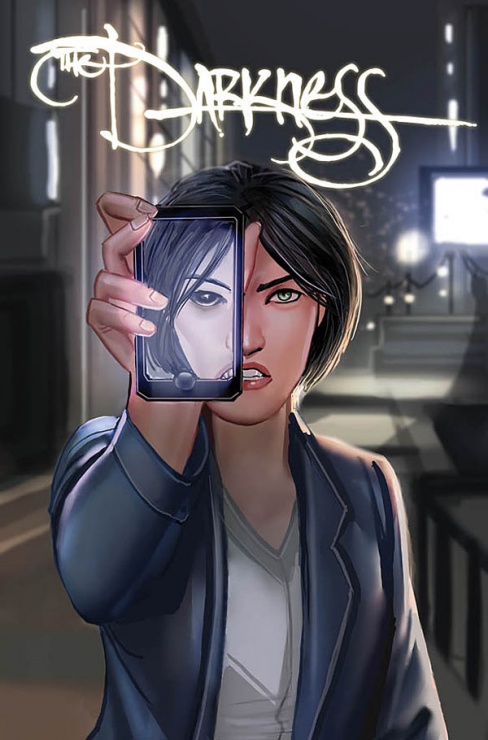 So… I haven’t read any of “The Darkness”. I played the video game once. But you know what I love? When stories that normally feature dudes are overtaken by girls who advance the legacy of the series. I know this is only a one-shot, but I’d be interested in seeing a “The Darkness” storyline where Hope becomes the new main in something akin to Rey from The Force Awakens. I don’t know, I’m just saying that it could be a way of me getting into “The Darkness”.

THE DARKNESS: HOPE (ONE-SHOT)
STORY: CHARLIE HARMON
ART: D.P. DWYER
COVER: LINDA SEJIC
APRIL 6 / 32 PAGES / FC / T+ / $3.99
TALENT-HUNT WINNING CREATIVE TEAM!
In the future, Hope Estacado is a crusading science reporter and her father Jackie, the “World’s Greatest Hero,” has retired to the suburbs to live out his golden years in quiet contemplation. Hope’s about to make a discovery that will shake her to her core–a discovery that will have dark ramifications for the entire human race–and Jackie might be the only one who can help. 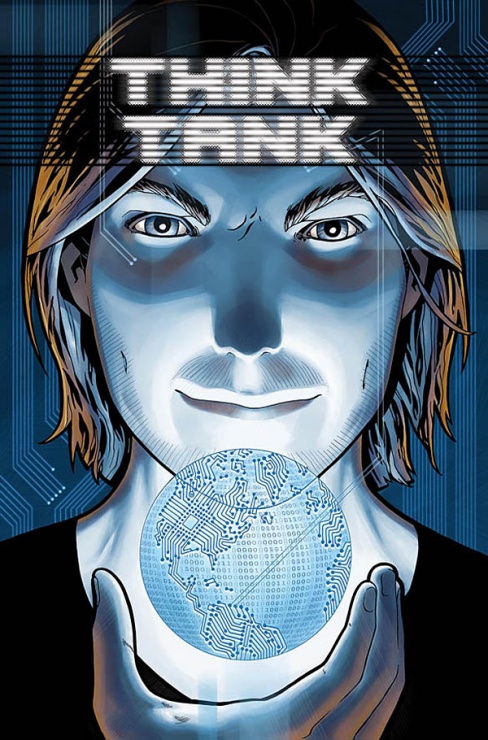 I feel like I have may talked about this before (and I’m too lazy to check), but I would be interested in checking out “Think Tank” as an ongoing series. It seems like the kind of series that lives and dies depending on just how creative the science of the series, but it would definitely something I would check out. And maybe you will too? 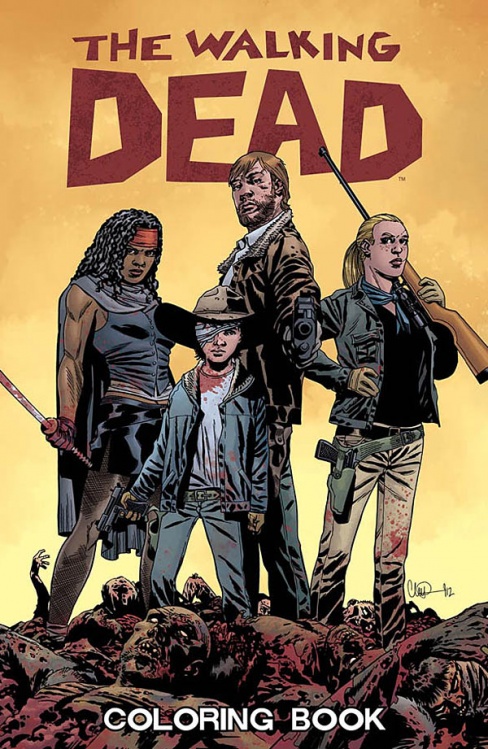 So… adult colouring books have become a thing and I don’t quite know where they came from, but I know they’re here to stay, at least for the time being. Image is jumping on this trend in May (this book being an advance solicit and scheduled for May) with “The Walking Dead” themed adult colouring book. I mean, it’s not something I would be necessarily interested in, but there’s bound to be people out there who are. There’s also a “Spawn” themed one coming in May too if that’s more your speed.

THE WALKING DEAD COLORING BOOK (ADVANCE SOLICIT)
ART: CHARLIE ADLARD & STEFANO GAUDIANO
MAY 4 / 96 PAGES / BW / M / $15.99
This oversized adult coloring book features art from throughout the long-running series. Sure, THE WALKING DEAD has never had color, but don’t let that stop you from coloring in all your favorite survivors and zombies! Just make sure to stock up on plenty of red.. 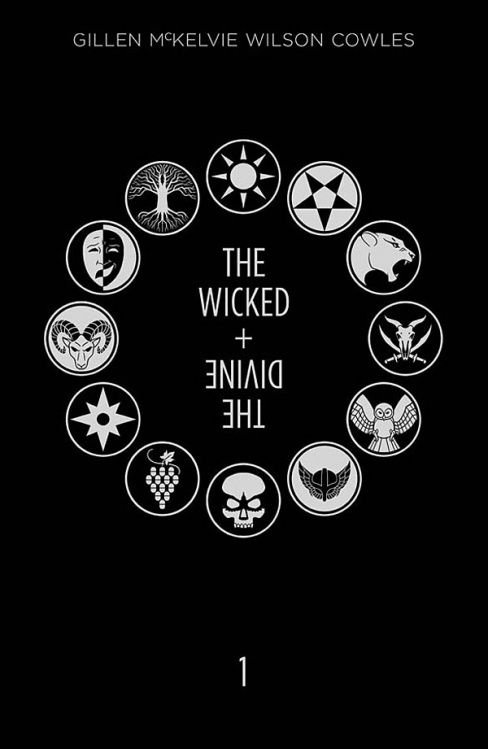 I love “The Wicked + The Divine”. I would say it’s the Gillen/McKelvie story that has grabbed me the most and I’ve been waiting for the announcement of a hardback collection of the series for some time now. I honestly can’t wait to see McKelvie’s art in the oversized format, I bet it’s going to look amazing.

Oh, also, “Airboy” and “We Stand On Guard” are getting the deluxe hardcover treatment as well, but I only have room for one of them and “WicDiv” is my favourite.

THE WICKED + THE DIVINE BOOK ONE HC (ADVANCE SOLICIT)
STORY: KIERON GILLEN
ART / COVER: JAMIE McKELVIE
APRIL 6 / 400 PAGES / FC / T / $39.99
KIERON GILLEN, JAMIE McKELVIE, and MATTHEW WILSON return with an Eisner Award-nominated modern fantasy where gods are the ultimate pop stars and pop stars are the ultimate gods. Revel in the opulence of this oversized hardback! Revel in it!  Collects THE WICKED + THE DIVINE #1-11

6. Criminals Always Return To The Scene Of The Crime 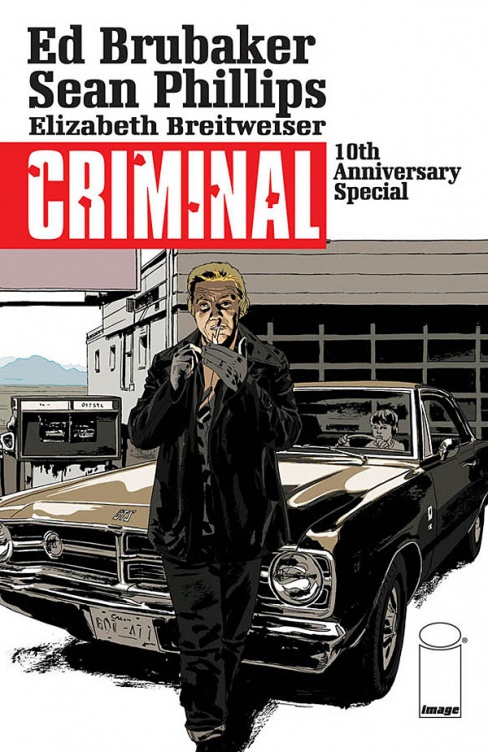 Ed Brubaker and Sean Phillips are a match made in noir heaven and after “Fatale” and “The Fade Out”, it’s great to see them return to their roots with another “Criminal” story. While I definitely want to see the collaborate more and more in the future, seeing them put out more stories set in their previous collaborative worlds is just as nice.

Now, if only I didn’t have to wait ten years for the “Fatale” reunion… 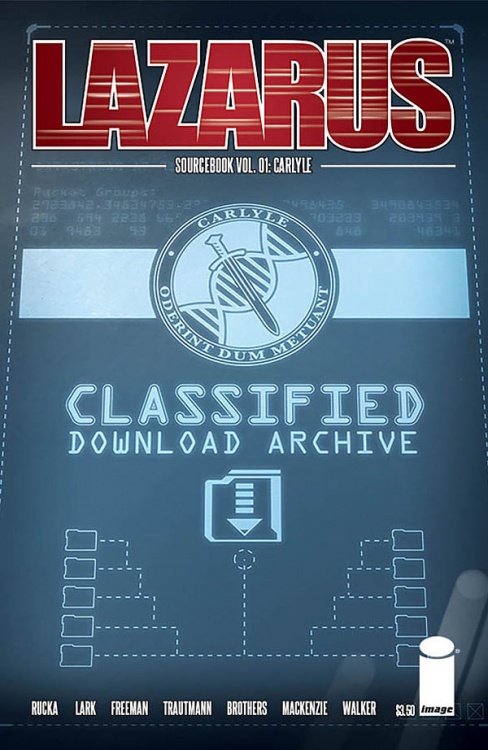 One of the things that has made “Lazarus” so compelling is the world that Greg Rucka and Michael Lark that has fully realised within the story. Sure, the characters and story are engaging and compelling, but it’s the world of the series that brings the series’ themes of poverty and family and loyalty to the fore. That’s why it’s so interesting that they’re putting out this standalone issue that provides an insight into the world of “Lazarus”.

I’m honestly more interested in this single issue than most series.

LAZARUS SOURCEBOOK #1
STORY: GREG RUCKA, ERIC TRAUTMANN, DAVID BROTHERS, ROBERT MACKENZIE, & DAVE WALKER
ART: MICHAEL LARK & OWEN FREEMAN
COVER: ERIC TRAUTMANN & OWEN FREEMAN
APRIL 20 / 32 PAGES / FC / M / $3.99
“CARLYLE”
Following the revelations of “Poison” and leading into the bloody events of “Cull” with LAZARUS #22 in May, a new look at the world of LAZARUS: What’s it like to live life under the Carlyle regime? This is where you find out! 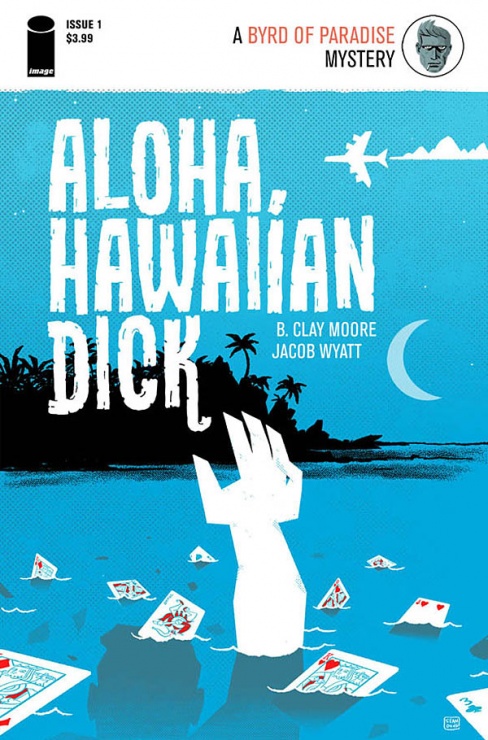 There’s something about the idea of a hardboiled noir story set in the 1950s… in Hawaii that makes me wonder why anyone else even bothers.

I know nothing else about this series other than the fact that I need to be reading this when it comes out.

ALOHA, HAWAIIAN DICK #1
STORY: B. CLAY MOORE
ART: JACOB WYATT
COVER: SEAN DOVE
APRIL 20 / 32 PAGES / FC / T / $3.99
The critically-acclaimed tropical noir returns for a brand new series! While Byrd remains in 1954 Hawaii, we meet another Byrd back in the States, and his impending arrival on the scene is destined to change the landscape of HAWAIIAN DICK forever.

3. Grizzly Shark Is The Name Of My Tigers Jaw Cover Band 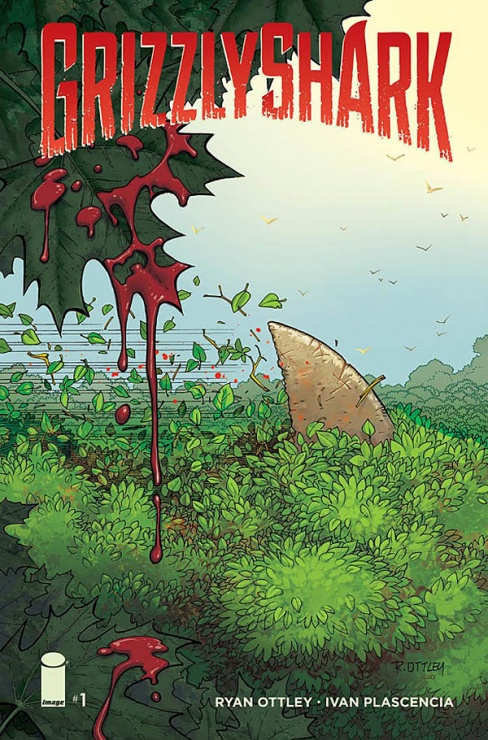 Honestly, I included this mostly to make that joke in the title, I’m not going to lie. But also, how can you argue with more Ryan Ottley comics? Ryan Ottley’s great! Image seems to a place where comic creators are given the chance to bring their indie work and give it a larger platform and it seems like this will join the ranks of “God Hates Astronauts”, “Head Lopper” and “Astronauts In Trouble” as series that Image have taken from the indie scene and given them a larger audience. I’m looking forward to this. 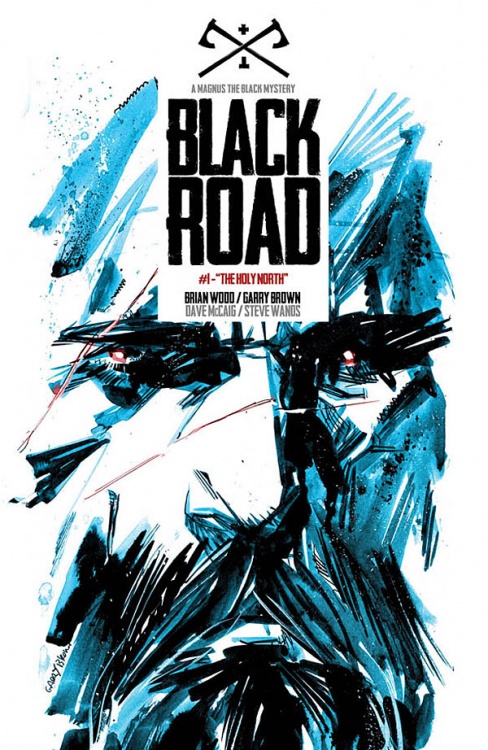 Brian Wood and Garry Brown teaming up again to dive into the Viking genre once more? Sign me the hell up. While I haven’t gotten around to reading “The Massive” quite yet (I know, I know, I’ll get around to it), I’ve seen Brown’s artwork before and he’s a perfect fit for this kind of story and him teaming with Dave McCaig is going to make this a book to keep an eye even if just for the artwork alone.

BLACK ROAD #1
STORY: BRIAN WOOD
ART: GARRY BROWN & DAVE McCAIG
COVER: GARRY BROWN
APRIL 13 / 32 PAGES / FC / M / $3.99
Meet Magnus the Black, neither clean nor sober, neither Christian nor Pagan, but a man true to his word. When a ranking official under his care is brutally murdered, he’s prepared to hunt the killers to the frozen tip of Norway, religious war be damned.
Northlanders creator BRIAN WOOD returns to the Viking genre along with artist GARRY BROWN (The Massive, Catwoman) and DAVE McCAIG (Batman, American Vampire) in this all-new series.

1. Noir With A Superior Edge 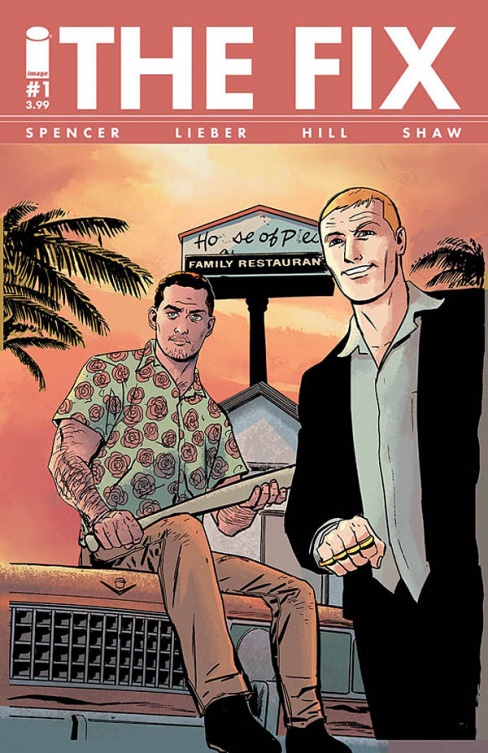 Have you ever wanted the “Superior Foes Of Spider-Man” team to create a noir crime series for Image? Well, too bad, because they already have! If you’re anything of a good comic book reader, you’ll have read “Superior Foes” and you’ll know that is a hilarious comic with a crime-adventure tinge and if “The Fix” is anywhere near half as good as that, then this is going to be a series worth checking out.

THE FIX #1
STORY: NICK SPENCER
ART / COVER: STEVE LIEBER
APRIL 6 / 40 PAGES / FC / M / $3.99
A story of the crooked cops, scheming mobsters, and corrupt politicians that run things–and the sex toy that can bring them all down. Oh, and the hero is a drug-sniffing beagle named Pretzels. Bad people do bad things to each other in this frenetic, outrageous, sometimes off-putting new caper! If you liked classic crime comics like CRIMINAL and 100 Bullets we apologize in advance for letting you down!

As always, you can check out Image’s full soliciations over at CBR for even more comics goodness.

Soliciting Multiversity: The Best of the Rest for August 2020

Welcome back, manga fans! Since Previews has a section of the catalog dedicated to manga, we’ll be highlighting that section’s most notable upcoming releases every month. Read on to see what stuck out to us!10. Obligatory romantic fantasy.I think I’ve made it clear through these columns that I have no personal interest in romantic fantasy […]

August? What happened to July? Oh, right… a lot of stuff happened.Yes, while the release schedules are still getting sorted out after recent events, comics will go on. There are a few comics that were scheduled for previous months now lined up for August, but we’ll avoid repeating those and instead look at what’s new […]