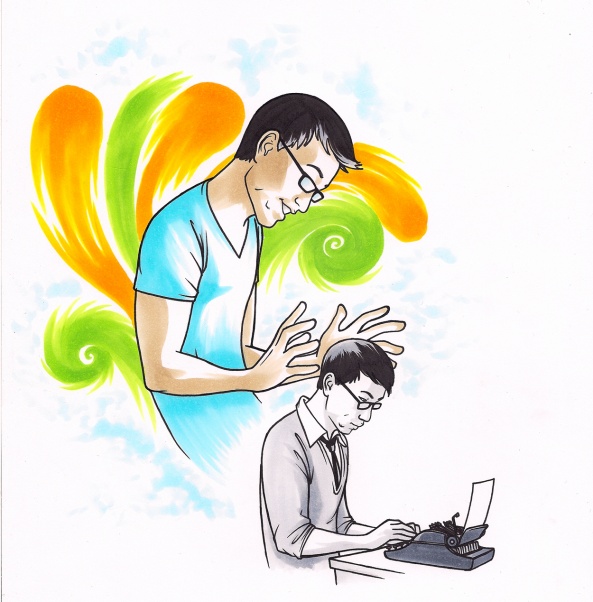 Sitting in a cafe on 7th street and 2nd Avenue in the East Village, I was back in New York City and unsure of how I felt about the return. Revisiting my old life immediately showed me its stark contrast with my new one in Vermont. A lot about me had changed in only a few short months, and having left once before, I was reminded of how quickly the city forgets about you. In a way, it was bittersweet considering that this city gave birth to my writing career. It was a faint whisper, but I could hear the creative Self share in my lamenting.

New York, I love you but you’re bringing me down.

If the challenges of living…no, surviving in a city like New York had taught the creative Self anything, it was that adaptability is the name of the game. It was my ability to roll with the punches of rejection that allowed me to progress further in the industry than I could have imagined. Without it, I would have surely sabotaged myself ten times over. It took years to recognize the importance of this skill, and even now, every new obstacle was a lesson in mastering it.

Despite the ongoing publishing struggles I was facing with my various projects, I had finally received some encouraging news from Dark Horse right before Emerald City Comic Con. Evidently, my submission After Houdini made quite an impression with a senior editor there, who informed me that he had sent it up the chain of command for further review. Having only submitted to them once before almost four years ago, I was quite proud of the pitch packet I assembled for them. Included with the printed pitch was a personalized cover letter, signed submission agreements, and copies of my published work which fulfilled the required writing sample request. To my surprise, I received a response in a little over a month.

Fortunately, after informing my creative team of this new development, it appeared that their work calendars could accommodate a potential influx of work if we got a green light. I had to admit that even after managing expectations, I couldn’t help but let my imagination do what it does best by expanding upon hypotheticals. Today’s: A future at Dark Horse Comics. The immediate gratification of thinking about potential success is intoxicating, even if it’s purely a figment of my imagination.

As I headed to one of my favorite conventions of the year, I couldn’t ignore the fact that in the pit of my soul, the creative Self was stirring. It wasn’t shy in expressing a different opinion–one forged in years of rejection.

If they haven’t committed, why should you?

My instinct had made a fair point. Even with this promising development, why was I about to put all of my expectation into one publisher like I had done so many times before? Resorting to this naive approach was preventing me from adapting to the fickle market of comic book publishing. I had heard countless stories from friends that were so close to getting in at a major publisher, only to hear about their editor leaving or getting fired–severing their only connection and leaving them out in the cold. That would not be me. This time I would diversify my opportunities by pursuing any and all publishers that might be interested.

Emerald City Comic Con was another great experience of tabling for the first time in Artist’s Alley. Unsure of how things would play out during the weekend, it made everything better knowing that I would be sharing space with Ryan Ferrier, Liz Nelson, Paul Allor, and Ryan K. Lindsay. I also finally got to meet my partner in crime on the Grim Leaper short, Chris Peterson, who was nice enough to let me split a room with him and talented artist Daniel Schneider.

I had printed a very small run of Southern Dog, Cobble Hill, and Death Tax–twenty a piece–and was anxious to see if anyone would buy one. Seeing the abundant and top-notch content that my table mates were showcasing, I was very self conscious of my short supply. Coupled with forgetting to bring my business cards, I felt completely and utterly unprepared.

However, being completely receptive to making necessary adjustments, I began tailoring my interactions to the customer’s interests. I tested out a few different sales pitches for each book, and like muscle memory, I could feel myself slipping back into the familiar salesman mentality from working years in retail. Maintaining eye contact, projecting an amiable demeanor, and putting books into people’s hand as a form of “test driving”–I was building confidence with each sale. At the end of the first day, I was able to sell almost half of my inventory for Cobble Hill and Southern Dog. That being said, I couldn’t take all the credit. With everyone at our table providing titles under Ferrier’s Challenge Comics banner [readchallenger.com], we were helping sell each other’s books as a team, and by day two had accidentally established ourselves as an unofficial small press booth.

Taking breaks from selling, I made my rounds on the convention floor to say hi to friends, old and new. I caught Joe Eisma at his table and after spending a few minutes catching up, I brought up the future of Art Monster. Having submitted it to Image Central a few weeks earlier and getting no response, I decided to mention other possibilities: the most notable being MonkeyBrain Comics. Considering their clear ingenuity with a fresh approach to the digital comic market, and the recent announcement of a few of their titles seeing print through IDW and Image Shadowline, we both agreed that finding a home there could be a promising opportunity. As nice as this all sounded, the reality was that as an up and coming premiere publisher, they weren’t accepting submissions. Finding an in was going to require more than just a perfect looking pitch. Rumor had it, we needed a recommendation. What better place to find one than networking at a convention? Identifying this new objective, I decided to put a feather in it, and revisit it a bit later.

I stopped by Sina Grace’s table to say hi and pick up an original page from his series Lil’ Depressed Boy that I had purchased a month earlier. We chatted for awhile about the challenges of transitioning into freelance full-time, and it was really comforting to know that I wasn’t the only one struggling to cultivate a consistent routine. Sharing our daily work schedules, it was clear to me that Sina had made necessary preparations well before he actually made the transition, and even though it was still a grind, he was making it work. Needless to say, the creative Self was taking notes and appreciated the encouragement.

Friendship like this is rare. Be sure to nurture it.

The highlight of the weekend was getting a chance to see Kurtis Wiebe and Ryan K. Lindsay in person. With Ryan living on the other side of the world in Australia, this was perhaps the only opportunity we were going to get to hang out. After a year of recording The Process Podcast that was more therapeutic than anything else, we three developed a bond that only exists between kindred spirits; It was like meeting up with long-lost brothers.

In typical comic book convention fashion, the nights were filled with copious amounts of alcohol, but the crowds–that were once filled with strangers–was now occupied with dozens of familiar faces. One night in particular, I found myself hanging out with Riley Rossmo, Joe Eisma, Ed Brisson, Jason Copland, Matthew Meylikhov, and Johnnie Christmas. After a couple hours of good food, drinks, and conversation, I realized that I wasn’t networking. I was just having a good time with my friends; the same friends that I had respected purely as a fan only a few years earlier. I also had several other creators like Joshua Williamson, Brett Weldele, Charles Soule, and Jim Zubkavich find me at the hotel bar to say hi, and when I mentioned tabling at the con, they made a note to try to stop by and pick up copies of my books.

It was at that moment that I realized the convention scene had become more of a semi-annual reunion with pseudo-family members, than a stressful weekend of networking. It was all starting to change for me, and I couldn’t help but feel a new chapter in my career was about to start.

You’ve shed your layer of anonymity. Time to start breaking in a new one…a better one.

With another productive convention weekend behind me, I managed to get a handful of business cards, chat with a few editors, and compiled a follow up email list. Two weeks later, I was back in New York trying to revise an outline for a new series that I’d been co-writing with Tim Daniel, when I received a response to query letter I had sent to a friend that had a book with MonkeyBrain. Evidently their popularity proceeded them as my friend informed me that their schedule was booked, and any new recommendations wasn’t realistic at this time. I couldn’t help but feel like I was back at square one with my career, but that feeling didn’t linger for long.

Perhaps more pressing at that moment was struggling to revise my work schedule for a two week trip. I had decided to disrupt my daily routine to travel with my girlfriend to New York for Asia Week–an important event for curators in the art world looking to purchase only the best for their collections. I not only wanted to be there with her for moral support, but also had a huge interest in her life as a new curator of a museum. A week later, we would be leaving for San Francisco to round out her business trip, and visit her family out west.

A year ago, all of these interruptions and disappointing false-starts would have had me crack under the pressure, resulting in regular sabbaticals from writing, but I didn’t recognize that person anymore. In fact, I felt completely detached from that former Self. Now–almost by reflex–I was combining a constant urge to remain versatile with a healthy dose of expectation management, and was successfully steering clear of the negative abyss that is the waiting game. All the years of hard work, trial and error, and absolute heartbreak in my life had informed and progressed the creative Self from self-destruction to self-preservation. With ten projects in various stages of development with amazing collaborators, I couldn’t help but feel a cool wave of reassurance wash over me. I was handling myself like a seasoned pro, and all of a sudden the creative Self spoke clearer than I’ve ever heard before.

Regardless of how you engage with the comic book community, whether it be as a creator or simply as a fan, attending conventions are fun. Having spent the past few years attending various shows across the country–first as press then as a fledgling creator–I found myself attending my first one as an exhibiting professional.After spending […]