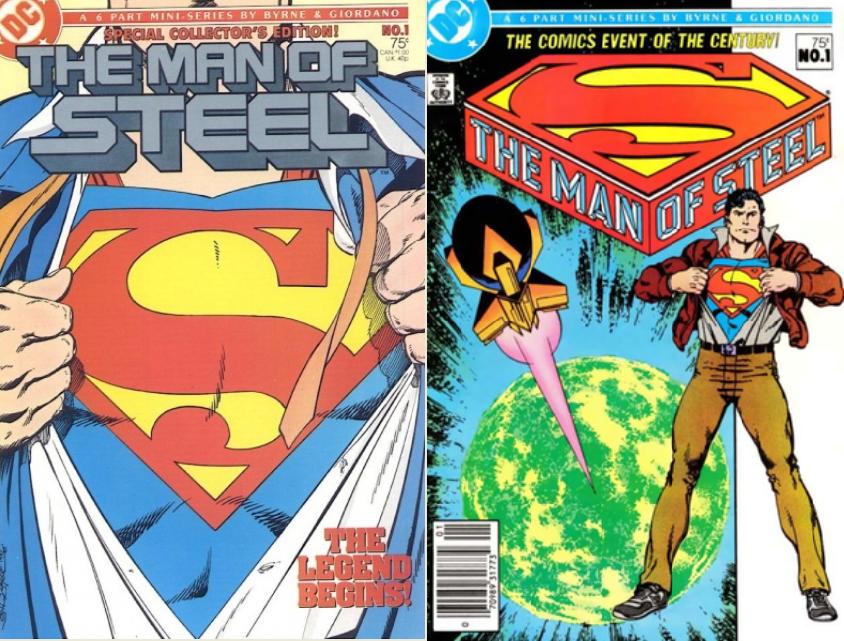 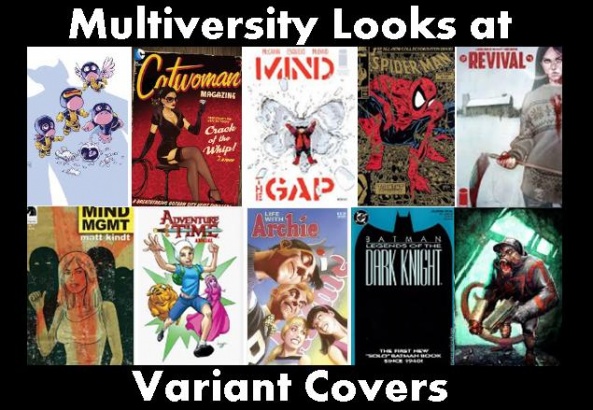 Believe it or not, there was a time when every issue of every comic had only one cover. That time was probably longer ago than you think, too. Over the next couple days, I’m going to take you on a journey of variant cover history, and it will span decades. 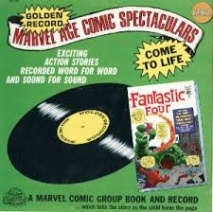 The first variant covers weren’t produced with collectors in mind, or anything in mind for that matter. The sudden popularity of Marvel’s first comics in the sixties gained the attention of the Golden Record company, known for packaging story books with vinyl records of them read aloud. An agreement with Marvel allowed them to make some read-a-long recordings of “Fantastic Four” #1 and “Avengers” #1 in 1966, and because this was several years after the books had been available on newsstands, a special printing of the issues was done just for Golden Records.

Partly because they had the same covers and weren’t obviously distinguishable and partly because there was no collector market to speak of at the time, there has never been much demand for these rare alternate editions. Even at the peak of the speculator boom in the early 90s, the Golden Record variants didn’t even warrant a mention in the “Wizard” price guide. When they finally got included toward the end of the millennium, the reprint with the record was listed at $260, aka 1.4% the price of the first printing. A CGC 9.4 copy of the issue recently went for $865 on eBay. 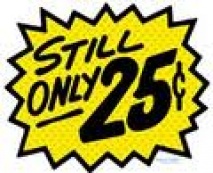 The next cover variant didn’t come along until a decade later in 1976, when Marvel wanted to gauge the reaction to a nickle price increase. While the rest of the country received their books at the regular quarter per issue, six small markets were selected as test runs for books priced at thirty cents. The trial lasted four months before being implemented nationwide. The issues from the test markets had the same cover art, with the only difference being the price. Naturally there was no advertising for the price variations, so very few readers were aware of the variants’ existence at the time.

The same process occurred for another four months the following year, going up another nickle. Aside from a few key issues like “Star Wars” #1 which fetch much higher prices, most price variants are not valued more than $10 higher than the standard version.

Another more noticeable type of variant also began appearing in 1977. The newsstand/direct market variant was born out of necessity to protect publishers from deceitful retailers in the new specialty outlets. If you didn’t know, the primary difference between newsstands and the direct market is returnability. Supermarkets, drug stores, and similar businesses would return unsold issues of comics to the publisher for a partial refund; comic shops, whose model is partly based around back issues, would forgo that option in exchange for a lower wholesale cost on the books. Initially there was no difference between the two editions, and some unscrupulous owners would open two merchant accounts, one in each category. They would then order most of their books at the cheaper direct rate and return them under the newsstand account.

To combat this, the publishers had to make the two markets distinct. At the time, DC’s newsstand releases were being distributed by a company called Whitman (also known for publishing the Gold Key characters), and their solution was to replace the DC logo with the Whitman logo. The issues were sold in packs of three for ninety-nine cents, and system was used on 170 issues. The novelty of a Whitman variant is more obvious than a price variant, but doesn’t seem to generate any interest from collectors. While there are plenty listed, none have sold at the time of writing on eBay.

Because Marvel used more than one newsstand distributor, the logo switch wasn’t an option for them. Instead, they opted for something more subtle: they put a black diamond in the price box. Other publishers followed Marvel’s lead, eventually including DC. 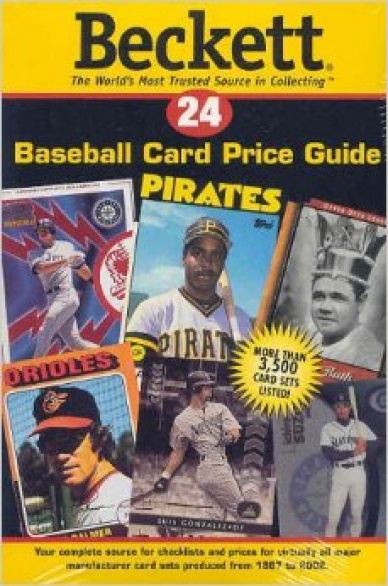 The next big event in variant history actually occurred in a court room, and didn’t involve comics at all. It was a case decided by the 2nd Circuit US court of appeals on June 8, 1984 between James Beckett (of the “Beckett” price guide) and “Card Prices Update.” The long and short of the case is that the price guide for sports cards in “Card Prices Update” were eerily similar to the prices found in Beckett’s mag. Beckett claimed this meant there was some kind of plagiarism going on since his sophisticated method for calculating prices was confidential. The judge disagreed, however, and the decision included this little nugget: “a price guide authority not only reflects market prices, but can determine them.” This means that if a price guide for a collectible (like comics) gains wide enough acceptance, then it doesn’t really matter how they calculate prices anymore. The prices are what the guide says they are because the guide says that’s the price.

This classic case of begging the question was irrelevant to comics at the time because the accepted guide – The Overstreet Price Guide – didn’t and wouldn’t list prices for comics until they were at least one year old, when any kind of short-term demand would have fizzled and the price would be stable. But that would change in a few years when Wizard hit the stands. 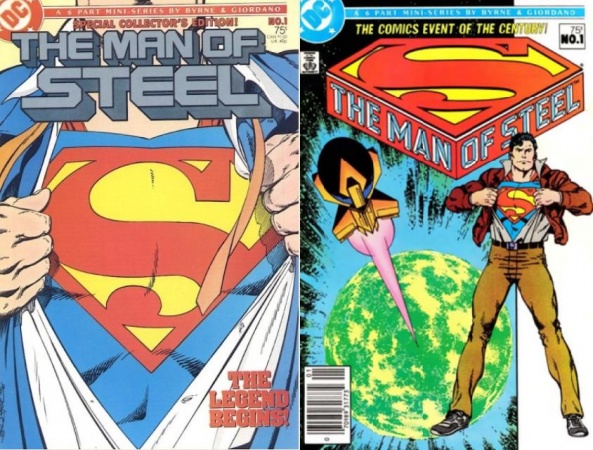 The first variant cover made with the intention of selling more copies came in 1986 with DC’s “The Man of Steel” miniseries. The first issue was shipped with two covers, one for newsstands and one for the direct market. This miniseries presented Superman’s new origin following “Crisis on Infinite Earths” and was intended to boost the Superman titles out of a sales slump.

Partly due to the lack of comic news coverage in the eighties and the creative changes to the character happening at the same time, it’s impossible to know how much impact the multiple covers had on sales. Considering the state of the market at the time and the lack of a significant price difference between the covers in the secondary market, it’s unlikely it generated much interest.

The first variant to really garner collector attention and reach values significantly above cover price came in 1987 when DC briefly considered changing their name to “Superman Comics.” The idea was quickly aborted, but not until after they tested the new logo on two comics in small markets. Unlike the Whitman case where only the logo was changed, “Justice League” #3 and “Firestorm” #61 received entirely new cover art: 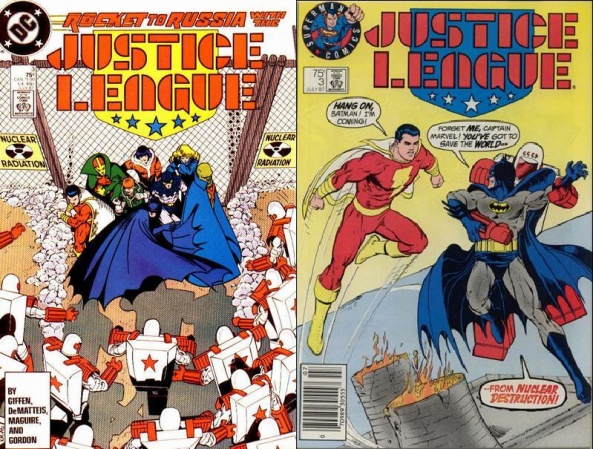 The rare Superman Comics variant immediately went for $50 at conventions. In 1993, Wizard priced the “Justice League” variant at $95 and the “Firestorm” at $65. By 1999, they had fallen to about half those values. In 2009, they were down to $10, which was still ten times the value of the regular covers.

More recently, they’re both going for less than $50 ungraded on eBay. 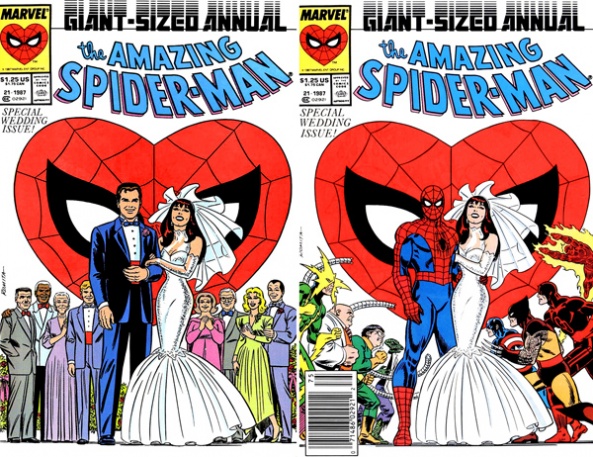 Around the same time, Peter Parker married Mary Jane, and Marvel decided to mark the occasion by doing a newsstand/direct market variant to the twenty-first “Amazing Spider-Man” Annual. Like the “Man of Steel” variant, there was never much of a gap in value between the two covers, and any gap there had disappeared after a couple years. In fact, price guides even stopped mentioning there were two covers after a few years.

At this point, the response to multiple covers could best be described as muted. Aside from one blip, most fans seemed rather apathetic toward the idea. The next variant, though, would herald a new boom for comics.

To be continued in The History of Variant Covers Part 2: The Boom Era 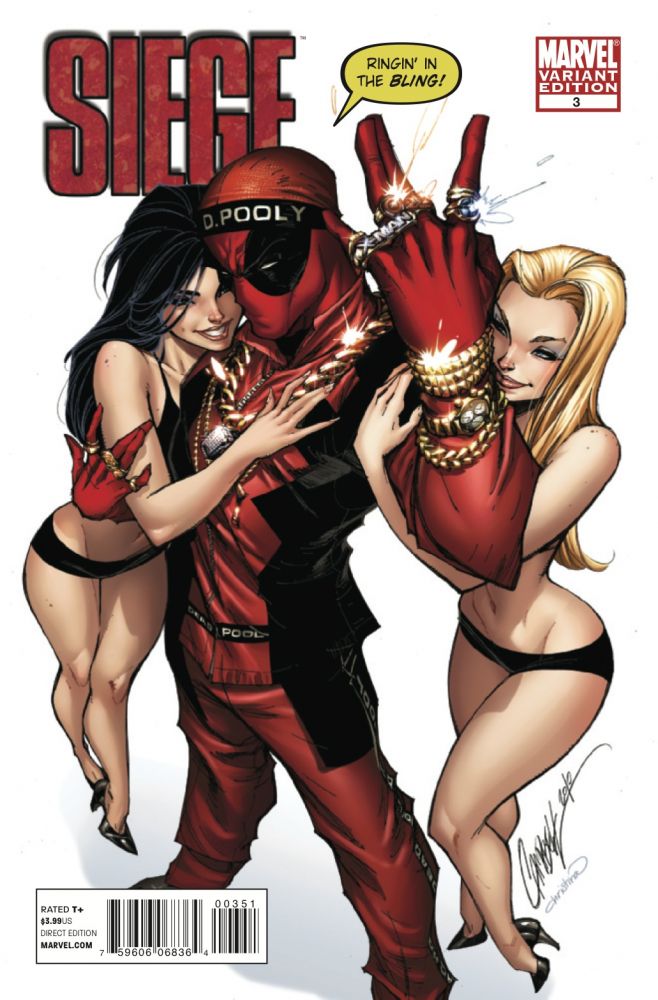 This 1:10 incentive edition article can only be viewed once for every ten times the regular edition is viewed (not really) and offers a director’s cut version of the top 10. A top 12, if you will. It also comes with a very rare sketch version of the “look at variant covers” banner.#12. New Avengers […]

The Top 10 Most Interesting Variant Covers

While researching for this series, I came across an astounding number of variant covers, and some were a lot more interesting than others. Well, interesting as in “notable for some reason,” not as in “appealing.” Some were so unique, it didn’t feel right to keep them to myself.So without further ado, here’s my top ten […] 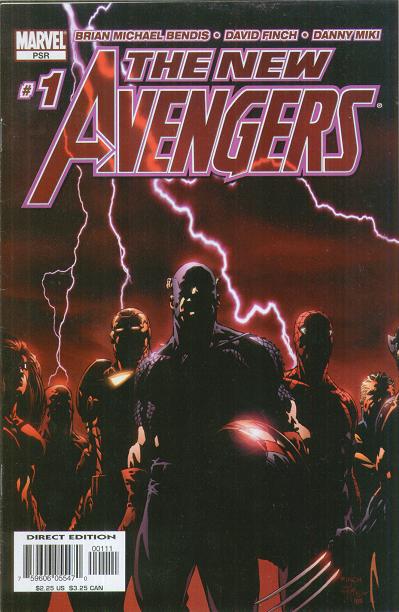 The History of Variant Covers, Part 3: The Modern Era

Welcome to the third and final installment of the History of Variant Covers. (You didn’t miss parts one and two, did you?) The last segment ended on the implosion of the speculator market and the lingering specter of variant covers. The industry began a slow recovery and lessons were theoretically learned. The 90s became viewed as an […]