“The Initiates” is a low-key non-fiction comic, exploring two worlds in a leisurely way and coming up with no grand conclusions. Sometimes you just want to talk about comics and wine. 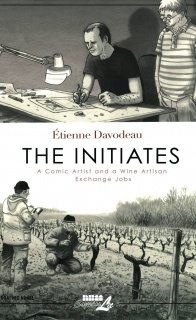 Written and Illustrated by Étienne Davodeau

Étienne Davodeau is a comic artist. He doesn’t know much about the world of wine-making. Richard Leroy is a wine-maker. He’s rarely even read comics. But these two are full of good will and curiosity. Why do we choose to spend one’s life writing and creating comics or producing wine? For more than a year, Étienne went to work in Richard’s vineyards and cellar. Richard, in return, leapt into the world of comics. They opened a lot of bottles and read many comics. They traveled around, meeting authors and wine-makers sharing their passion for their jobs. The Initiates explores the nature of a man’s vocation with a true life representation of it from two very different perspectives.

I don’t have interests, I have obsessions. They come on like tidal waves, overwhelm me, then ebb away gradually but never fully disappear. Sometimes I can see an obsession coming. With comics, with perfume, and even with ball pythons, there was a moment when I knew the wave was hitting. But with wine, I’m not so sure. It’s hanging around the horizon and catching my attention every now and then. In any case, I picked up this comic well aware that it could bring the wave closer, and if that’s not taking a risk to wallet and health in the name of this site, I don’t what is.

In short, this comic recounts the year that comic artist Étienne Davodeau spends with Richard Leroy, a winemaker. The aim is to learn as much as possible about each other’s disciplines, and drink a lot of wine and read a lot of comics and have a lot of discussions along the way. It’s a simple recipe, but an enticing one, and curiosity provides the forward movement of the narrative.

With soft, greyscale art and delicate lines, “The Initiates” is a lovely book to look at. Davodeau fills slightly uneven, hand-drawn panels with washes of landscape and dynamic figures. With backgrounds that spill over into the horizon or fade away to whiteness when need be, Davodeau shows a sure eye for composition, for what will further immerse us in the narrative, and what would take us out.

Richard himself comes across vividly, all through his transition from a “hirsute druid” in the winter to a clean-shaven, smiling storyteller in the summer. His gestures, even his manner of speaking, are recognizable and endearing. Étienne himself, as a character, is a little more remote, usually watching and listening, but getting across some sarcasm, humor, and general good-nature along the way.

Montbenault, Richard’s vineyard, is depicted so frequently and in such detail that it becomes familiar, all through the growth and harvesting of the vines themselves. With Richard emphasizing the importance of knowing your vineyard – walking up and down it, doing as much by hand as possible – it follows that we should see a lot of it too.

Meanwhile, the machines and devices Richard does use are reproduced, based on sketches made at the scene, and for all their studied realism still come across a little fantastical. This really is a different world, and every new facet gets careful treatment.

As they spend time together – Étienne working in Richard’s vineyard, Richard reading comics and meeting up with creators – the men find striking similarities in their lives. After spending a busy day at the printer’s, for instance, Richard finds it’s just like taking his wine to be barrelled: you have to rely on somebody else’s work to complete your own, and it’s nerve-wracking.

Most interesting of all, though, are the moments when the two men’s beliefs are practices are mutually unintelligible. Étienne can’t stop talking about “Watchmen;” Richard falls asleep reading it. Richard waxes poetic about biodynamics, a near-mystical process in winemaking; Étienne is skeptical. They strain to understand each other but sometimes give up; not everything can be shared.

It’s all smoothed over through wide-ranging conversations, with each other and with other artists and winemakers – the kind of conversations where you have so much to say that your dinner gets cold. Good comics and good wines, Davodeau explains, both improve with discussion, revealing new aspects and surprising undercurrents.

That said, this wine comic is more about wine than comics , we spend more time pacing Richard’s vineyard than deep in conversation about Moebius. Which is as it should be; if you’re picking up this comic, you’re likely already familiar with the medium. In any case, there’s a reading list and a drinking list, both mostly French, in the back of the book, so you can fill whatever gaps in your education you please.

The only thing getting in the way of complete immersion in this book is a slightly hinky translation, which trips up the more dialogue-heavy pages. If you can read this book in the original French, do so.

“The Initiates” is about sharing interests, however divergent they may be, and finding common ground as well as surprises along the way. And it’s inviting, steering clear of pretension or snobbery, with the emphasis on simple enjoyment. Like a glass of wine in the right company, it’s relaxing as well as energizing, and probably good for you.