This week, Robbie and Ken check in with “Mashle: Magic & Muscles” and “Undead Unluck.” If you have thoughts on these or any other current Shonen Jump titles, please let us know in the comments! 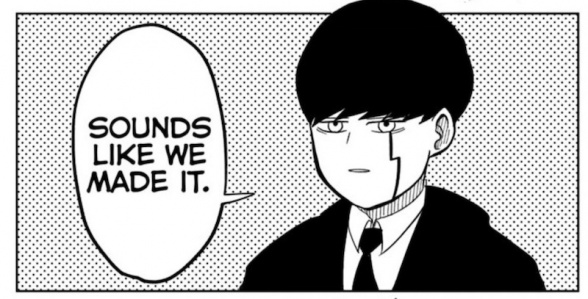 While it’s still early, I can honestly say that “Mashle: Magic & Muscles” has won me over from the first chapter. Shonen Jump has been hit and miss with the comedy series as of late, but when a series like “Mashle” hits, it hits with all the might of its overpowered protagonist.

When the last chapter left off, protagonist Mash had made his way out of a magical labyrinth by simply walking through it. I mean directly through it, walls and all. This continues to set the tone of a non-magical character overcoming magical obstacles just with muscle alone, in a very comedic fashion. Think “Black Clover” meets “Mob Psycho 100” or “One Punch Man” and you’ll have the general idea.

In fact, “Mashle: Muscles & Magic” reminds me of ONE’s manga in many ways. The comedy uses similar stylings, where much of the humor comes from the way protagonist Mash overcomes powerful magical obstacles with little to no effort and how other characters respond to it. Like with “One Punch Man” and “Mob Psycho 100,” the protagonist is overpowered to the point where he gets through everything with a blank face and a sense of detachment from the danger and power the others are overwhelmed by.

Even the art style is very similar in terms of character design. Hajime Komoto’s art is more detailed and clean than ONE’s sketch-like stylings, but not nearly as detailed as Yusuke Murata’s. With that said, Komoto’s artwork scales up dramatically when we get to see the headmaster’s magic in action.

With that said, the manga needs to be more than just “similar to ONE’s series” to be a success, and fortunately, it can still stand on its own unique merits. The comedy is well-paced, with Mash working as both the straight man to other characters and provides humor of his own from the way he can punch his way through anything. We’re getting to meet new characters who fit their own archetypes, such as the evil, haughty professor and the poor but earnest girl who will likely be a recurring support character. The headmaster himself appears to be a good addition to the supporting cast, bringing a certain level-headedness and sense of righteousness to the academy.

Additionally, Mash himself gets to prove his mental fortitude as well as his physical. So far we’ve seen him brush aside attacks from powerful foes with ease, but is he willing to actually get hurt? As it turns out, yes, and without hesitation. It makes him more engaging as a character, so we can like him as a protagonist for more than just his status as a non-magical person in a world and school of mages.

Overall, “Mashle” is still off to a great start at three chapters in. It remains very humorous, easy to read, and entertaining the whole way through. It may be early to make a call, but I see this becoming a long-running comedy series with a moderately successful one season anime plus an OVA or two. (Is that too specific a prediction? Maybe, but I’m sticking to it.)

Final Verdict: 7.5 – A great comedy series that moves at a fast pace while letting us get to know the characters more and more. Absolutely worth reading each week. 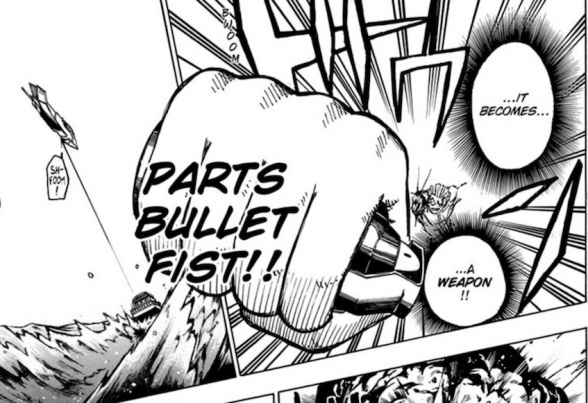 “Undead Unluck” is a book that I feel like I won’t have a middle ground in the long run: I’m either going to love it or despise it as it grows. I can’t begrudge the book’s dual protagonists having a uniqueness to their gifts with the undead Andy and the unlucky-powered Fuuko. Furthermore, the tone of the series has just enough of that crazy over the top-ness that allows it to stand out without feeling like a retread of other stories inside Weekly Shonen Jump. With that said, it feels like for every bit of praise one could come up with, there’s something annoying that drags it back.

A lot of what I can say positive in this chapter is from its visuals. As I said, “Undead Unluck” has great weird and crazy energy and Rozuka’s artwork. From the scenes such as Fuuko and Andy’s boat traveling across the sea to Andy’s fascinating use of one of his severed limbs to the duo fighting a plane, every bit of the artwork sings with a vitality to it. Even a scene of Andy flashbacking that conveys a more sinister edge has this same kind of energy. This is a book that takes itself seriously in not taking itself too seriously.

This dynamic visual energy of this book is counter-balanced for me in the fact that I find both Andy and Fuuko to just… be kinda bland.

I discussed above that Andy and Fuuko’s abilities are out of the ordinary when in regards to their abilities, however, the same can’t be said for their personalities. Fuuko comes off as the everyman but lacks something to make her endearing. Furthermore, Andy… really comes off as a tool. When Fuuko calls out Andy being a perv, he fully acknowledges it and straight up feels her up as a way to test out the nature of Fuuko’s powers. Yes, it does make sense in context and no, these two are nowhere near as bad as the protagonists from “Agrivity Boys,” but by the end of the chapter I was asking myself: “Do I really want to follow these two around?”

It’s very early days for “Undead Unluck,” but the story has made strides in some areas and not so much in others. Visually, it’s very well-put together and I have an admiration for the style it wants to convey. Having said that, the characters that we’re expected to follow aren’t there yet. It’s going to come with time, but hopefully this book can become a must-read.

Final Verdict: 6.3- Early days, but “Undead Unluck” has a visual energy that makes up for some of the book’s shortcomings.