This week, Robbie and Ken check in with “My Hero Academia: Vigilantes” and “Hell Warden Higuma.” If you have thoughts on these, or any other current Shonen Jump titles, please let us know in the comments! 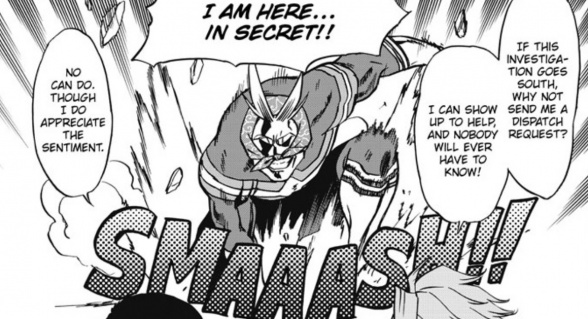 It’s nice to see characters’ hard work pay off every now and then, and in many ways, that’s what this chapter feels like. Our vigilante protagonists manage to provide valuable intel for the pro heroes (and have their actions validated as “self defense and citizen’s arrests”), Captain Celebrity has achieved popularity without being a self-aggrandizing jerk, and the idol group gets a big opportunity to perform. All of it feels earned, as the result of the characters’ actions and hard work. It’s pretty satisfying.

Since there isn’t much in the way of action this issue, it’s a chance for some character work. Hideyuki Furuhashi has a good balance of existing “My Hero Academia” characters we know and love and the original “Vigilantes” characters, and they all seem to work off each other nicely. A personal favorite moment is Aizawa muttering “this schtick is exhausting” as he has to pretend he has no idea who the vigilantes really are. The deadpan expression sells the character, while contrasting nicely with the more energetic members of the “Vigilantes” supporting cast.

This chapter also gives us several cameos of other heroes in the “My Hero Academia” series, like Best Jeanist and Fat Gum. Betten Court does a fine job drawing them in the manga’s style; it’s not a direct mirror of the main series manga, as it’s a little cleaner but less detailed, but it’s still pretty close. Also, it’s nice that they remembered there’s a washing machine superhero. This is an important aspect of their world.

The characters original to the manga have plenty of personality in their designs, with nice little touches like Makoto’s mole or Captain Celebrity’s massive chin. They fit in with the established “My Hero Academia” world nicely, and everyone shares the same level of expressiveness that makes the HeroAca characters so easy to connect with.

While “My Hero Academia: Vigilantes” may not have quite the same scale as “My Hero Academia,” it’s a nice section of the world to explore, and the characters are all appealing in their own ways. If you can’t get enough of this world of heroes, it’s a good addition to the story.

Final Verdict: 6.8 – A low-stakes chapter that provides some well-earned success and validation for the characters. With solid, clean artwork and good character designs, it makes a good side story to the “My Hero Academia” manga. 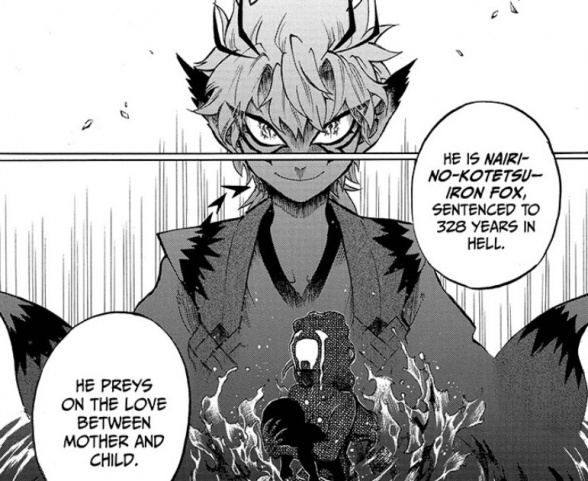 I wish this series was more interesting than its turning out to be.

It’s early days for “Hell Warden Higuma” and it has all the trappings of a supernatural action series, very reminiscent of “Yu Yu Hakusho” and “Bleach.” However, within that lies the trap: it feels too reminiscent. Even here, with Higuma being set up to go after the kitsune, Nairi-no-Kotetsu (Iron Fox), there doesn’t feel much uniqueness to it. We get a rundown on what a kitsune is and a first impression of Kotetsu as an antagonist, a brief, but effective moment.

But surely even with a rather used premise, interesting characterization can make up for it, right? Well, therein lies our other problem: Higuma himself. Over the last seven chapters he’s kind of… well… boring? He’s dutiful (basically a supernatural cop from a line of supernatural cops), showing subtle care for his new found allies, and even some mild exacerbation at his higher ups. He’s basically the straight man to the other cast members more interesting personalities. Even in comparison to Kotetsu, who possessed a mother to harm her child, at least gets the blood pumping a little in comparison to our protagonist.

Hokami’s artwork is perhaps the strongest part of the chapter. While Higuma in this chapter comes off as the weakest, the visual personality on display with the characters of Great King Enma and Kotetsu help elevate it. Enma’s briefing to Kotetsu is combined with a playful and slay movements and expressions. Furthermore, Hokami does sell the introduction of Kotetsu with some unnerving imagery of his aforementioned establishing character moment. It’s tempered by later scenes that subtly hint Kotetsu may not be fully under his own influence himself, and even unstable.

“Hell Warden Higuma” borrows a lot from other supernatural action series, but it really needs to have its big moment to make it fully stand out. It’s understandably early days, but it isn’t going to be long before the new novelty of the series wears off. The art does have finer points and it is holding the books interest, but the writing side needs to catch up to it.

Final Verdict: 5.0- A fledgling series that may need to soon hit an out-of-the-park moment to truly unleash its potential.