This week, Rowan and Kerry check in with “Agravity Boys” and “Guardian of the Witch.” If you have thoughts on these or any other current Shonen Jump titles, please let us know in the comments! 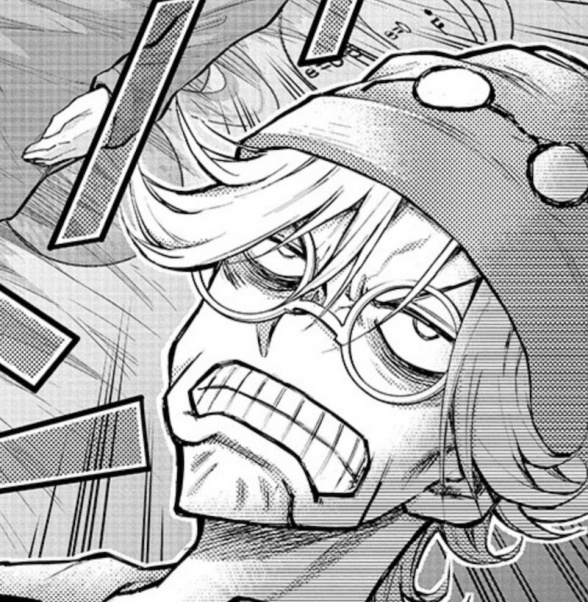 This chapter works well as a nice epilogue to the last story, showing the dire but delightful ramifications of Geralt’s injuries. Nakamura spins a neat done-in-one saga here which Saga embarks on a journey to find a volcano-blooming flower that may or may not be the secret key to saving Geralt from death. I love how high stakes the situation is but how in contrast, Saga is the only one taking the event seriously. Higher Being has a great cavalier attitude to the whole event, seemingly because if he really wanted to, he could heal Geralt himself. It adds to the comedy aspect not only because he’s petty enough to make Saga go through a largely pointless exercise, but that Saga acknowledges how vague and convenient the flower is and buys into it anyway.

The events that follow are wild in how much they are a one-sided narrative. Saga talks to a bunch of mute aliens called the Jumbros, and seems to interpret their method of communication out loud for his own convenience and for the audience’ hilarity. Nakamura cleverly has Saga over-explaining every conversation and scenario with the Jumbros calmly going along with everything, which almost makes them seem to be in on Higher Being’s plan. As much as there’s plenty of antics and accidents along the journey, I love how much humor is combined with heart to tell a good story here. When the “smart” Jumbro goes and brings Saga a rock instead of the elusive flower, Saga gets frustrated but ultimately says the most innocent, Shonen-style line that came seemingly from nowhere: “Aaah! No need to get so down about it… I trust that you guys will bring back that flower. Until then, I swear I’ll keep protecting you”.

Nakamura’s artwork is just as fun as his story here, being dynamic and fun right from the start. I love the initial contrast we get of the rest of the gang going about their innocent business, to the page turn of Geralt sporting the most ridiculous look and literally laying on his then-death bed. As we go through, Nakamura easily sells how innocent, gullible yet well-meaning Saga is throughout the issue. When he begs to the Jumbros, it appears to exhaust him completely as he kneels on his hands and knees, face exasperated and yelling to the point of sweat dripping down his face. Yet, when they agree only a few panels later, he immediately is content and happy looking as if he’s never felt strained at any point in his life.

There’s also a very solid feel to how the characters navigate the story and the environment around them. The boys at the start of the chapter laze around their room, reveling in their well-earned break. However, it doesn’t start getting exciting until Saga is on his trip. Nakamura draws vehicles with great rigidity lots of clean lines, making them have a real weight and genuine feel to them. This is especially so when we see Saga and the Jumbros careening across the landscape in a Jeep, with neat little additions like having all the seated characters strapped in by seatbelts (which looks hilarious on the Jumbros). When Saga uses his armor to deflect the volcano boulders, there’s a very kinetic effect to him coming into contact with them, almost like a mechanical sander grinding down a piece of metal. It’s visceral, but really brings us into the moment.

“Agravity Boys” remains to be a delightful comedy story in the Shonen lineup. This chapter is something of an epilogue but shows how that kind of story can be made into an independent story of its own with plenty of heart and relevance.

Final Score: 8.9 – A delightful done-in-one story depicting some silliness but strong friendships underneath everything. 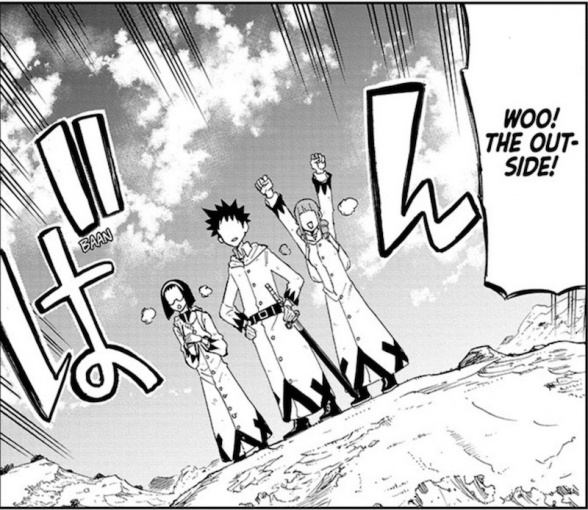 Guardian of the Witch – Ch. 3
Written and Illustrated by Asahi Sakano
Reviewed by Kerry Erlanger

With chapter 3, “Guardian of the Witch” is still in setup mode, paving the way for what appears to be a sprawling storyline. Like the hero of a Final Fantasy-style RPG at the beginning of his quest, we’re getting a lot of world building thrown at us.

Also like a Final Fantasy hero, the manga has amassed a squad of characters with different yet complementary abilities to help us along our way. Of course there’s Fafner, the typical, battle hungry warrior who’s legendary with a sword. Next is Nahta, the handmaid who’s quiet intelligence likely masks a surprising inner strength. Finally, there’s Manafsa, the powerful, flame magic wiedling witch who they’ve been tasked with saving from her terrible fate. They’ve banded together to leave the (relative) safety of their city-state and head into the badlands beyond filled with evil, because out there lies hope in the form of a rumored retired witch who has somehow bested her inner evil. First, though, they must visit seven towns along the way to stop for supplies and talk to the people who live there who will presumably give them side quests. Typical RPG/action/adventure/fantasy manga stuff.

Tropes aside, “Guardian of the Witch” has so far managed to keep my attention. Despite being early on in the series, each of the characters has a fully developed personality, partially aided by their character designs. Again, these are slightly tropey, but Sakano has used that skillfully to his advantage by allowing our minds to fill in the blanks using what we already know about manga boys with spiky hair. This means the story is able to move at a good pace, which is no small feat when you’re trying to set up a world as large as this one. It also means that the characters are able to act without us questioning their motives too much. Nahta has glasses and a no-nonsense haircut, of course she successfully snuck into the library and found out about the retired witch. Some people might find this lazy, but I actually think it’s a smart decision on Sakano’s part. A manga like this can’t mess around with backstory too much — it has to get moving.

One of the only complaints I have about this manga so far is that I don’t entirely believe the characters are in the danger they’re purported to be in. Fafner has bested every opponent he’s come up against and Manafsa is apparently strong enough to single handedly defend the city-state from every evil that has ever existed, so I’m pretty much imagining them strolling through the world with no problems whatsoever. I guess that’s why chapter 3 has us meeting Gen and Ruli, another guardian and witch team who Lord Rector has contracted out to fight Fafner and Manafsa for him. I’m curious where this will go, if Gen and Ruli will remain foes or if they’ll somehow band together eventually. It’s revealed towards the end of the chapter that the reason a guardian must kill his witch is because of their strong bond, the same bond that led Fafner to say “screw it all” and run away to try and help Manafsa. Will they inspire Gen and Ruli? I have a hunch they might, but I also wouldn’t be surprised if they’re just two in a long line of witch/guardian teams that Fafner and friends have to go up against.

Final Verdict: 7.0 — “Guardian of the Witch” is still in its infancy, but so far has developed a story and characters that make me excited about the possibilities.