This week, Brandon and Kerry check in with “The Promised Neverland” and “Yui Kamio Let’s Loose.” If you have thoughts on these, or any other current Shonen Jump titles, please let us know in the comments! 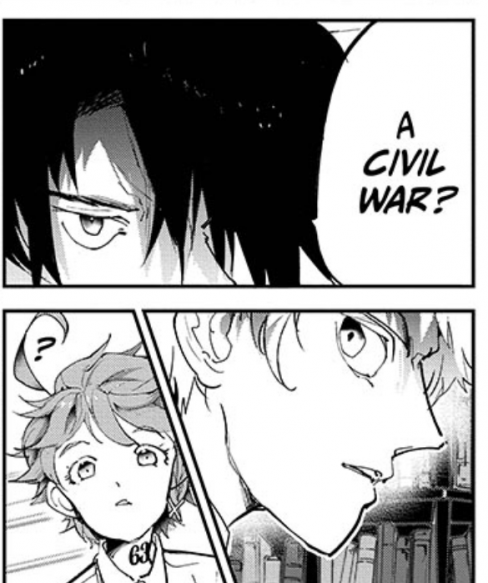 What this week’s chapter of “The Promised Neverland” lacks in action, it makes up for in plot twists, character-defining moments and heartwrenching emotion.

The first panel is a stunning wide shot of the safe-haven/complex currently housing our protagonists. Demizu has rightfully garnered a lot of acclaim for his work on this series, but this one panel encapsulates what he does best: he gives life to most-everything he draws. Yes, his character designs are excellent, and his action is kinetic and exciting, but in this one establishing-shot, he creates a feeling of vibrancy and fantasy that places like Disneyland spend millions of dollars trying to produce. And he does it with a pen.

This vibrant nature is felt all throughout this chapter where, honestly, not a lot actually happens. The opening scene sees Dominic struggle to recover from his injuries and walk as the other children cheer him on. Meanwhile, Emma and Ray tend to Chris, still in a coma, while they struggle with Emma’s moral-conflict and rehash their previous interaction with the new characters Barbara, Cislo, and Vincent. Both scenes have very different emotional grounding, but both feel genuine and human.

The rest of the chapter sees Emma and Ray confront Norman about his mysterious plan. It’s all very expositional, but Demizu’s blocking and paneling are so lively that it didn’t feel bogged down or boring. It’s here where Shirai’s writing begins to shine.

It’s true that this series tends to take its time building crescendos, sometimes leaving readers wondering when something is actually going to happen. Here though, Shirai takes advantage of the down time and allows the characters to play off of each other and their respective personalities. Norman, now shrouded in trauma and responsibility, calmly reveals his plans to cause a demon civil-war while Ray stoically ruminates on this new information. Meanwhile, Emma, the one bursting with emotion and compassion, reacts to nearly everything Norman says and voices her concerns and questions regarding the safety of the children and the destruction of the demons. The sequence is reminiscent of the first few chapters of the series when the three were much younger and unaware of their purpose on the farm. Ray was always somewhat removed from the activities that Emma orchestrated, and Norman excelled and led in nearly every instance. These characters have grown, but the foundation of their relationship remains the same.

The chapter’s cliff-hanger ending is a bit of a bombshell and the feeling of terror and shock that strikes Norman left me wondering: what, exactly, does that mean for Norman’s plans? And what is this going to do to Emma?

Final Verdict: 8.7- This chapter sets the stage for yet another great story of triumph and tragedy for the children of Grace Field. 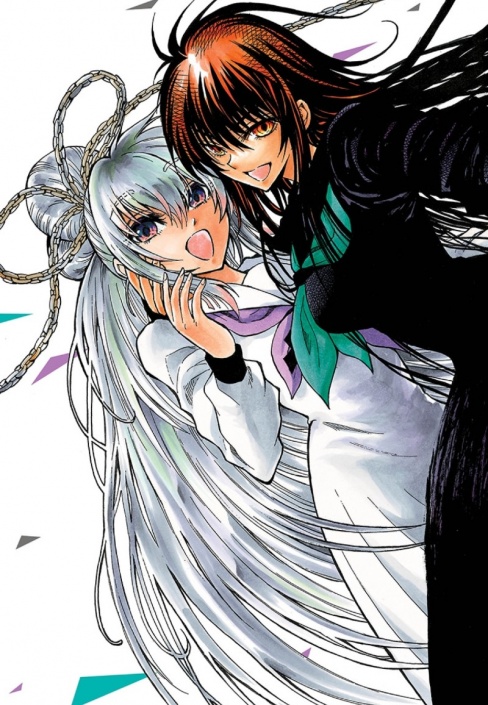 “Yui Kamio Lets Loose” is the latest manga to be added to Shonen Jump’s lineup. While the synopsis didn’t totally grab me, I decided to give it a go and ended up enjoying it more than I expected.

Basically, the concept is this: Yui Kamio is a high school girl with a secret — underneath her soft-spoken beauty lies a terrifying, murderous bully, and the only way she can keep it in check is by tying her hair up with a magical chain hair tie meticulously monitored by her long-suffering best friend, Nao. We’re first introduced to Yui’s dueling personalities through a run-in with the big man on campus, Kiito, and his friends (strangely referred to as “the Life Lovers” because of their affluence and lack of hardships in life), who she pummels as retribution for them pushing around Nao. It’s an interesting moment, actually, and I appreciated it more in retrospect. Kiito is the first character introduced in the manga, and so the reader is pretty preoccupied with what’s going on with him at first. You barely notice the girls, discarding them as inconsequential as Kiito just did. That’s why when Yui’s hair tie is accidentally broken by a random student, it barely registers. I didn’t even realize it was her at first because her name is revealed in an almost throwaway panel that up until she’s finally revealed, felt tangential to the plot. At first I thought this was sloppy storytelling, but actually might be a very smart way to emerge the reader in a scene that is equally confusing for Kiito and the other characters. In a way, it made me almost believe the premise more.

One of the ways Hiroshi Shiibashi distinguishes Yui’s two personalities is through the art. When Yui is good, her hair is white and so is her outfit. When she’s bad, her hair and outfit are, you guessed it, black. Not exactly earth-shattering in terms of art direction, but it is effective, and at least more understandably confusing for the students who think she’s two different people than, say, putting on and taking off glasses might be. Overall, the artwork throughout the chapter is really impressive. There are several gorgeous full-page drawings of evil Yui that really stood out and gave me pause as I was reading, especially her first introduction, which was particularly striking.

Kiito, who is more or less the actual protagonist of this chapter, also grew on me. At first, he’s introduced as a typical aloof rich kid, so bored by the life he leads (so many yacht parties, who can keep track?) and the women who throw themselves at him. It felt a little stale — hello, tropes! — and while his soft-side-reveal later in the chapter wasn’t exactly concept breaking, it did give him a little more nuance.

In the end, Yui and Kiito are resolved to keep each other’s secrets. Inevitably this will be much more difficult for Kiito, who’s tasked with wrangling a violent crazy person, which could lead to some potentially humorous situations in the future. It also sets up the idea of an interesting dynamic between him and Nao, who are now forced to be comrades in arms in their struggle to keep Yui under wraps.

Final Verdict: 6.5 — It’s a strange premise, to say the least, but Hiroshi Shiibashi managed to pull it off much better than I was expecting, leading to a few moments that ultimately did make me want to stick around for chapter 2.