This week, Matt and Rowan check in with “The Last Saiyuki” and “Hell Warden Higuma.” If you have thoughts on these, or any other current Shonen Jump titles, please let us know in the comments! 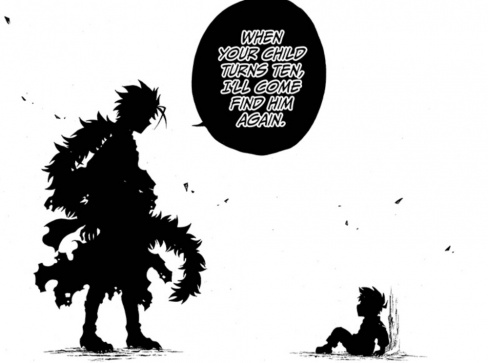 “Hell Warden Higuma” feels like it’s in something of an odd spot. This chapter is paced oddly, to say the least, as it dwells on a few of the lingering plot points of the last few chapters. The most important is the recurring image of the antagonist Akagane coming back to haunt Higuma’s memory, as the person that killed his father and promised to come back to reap what power Higuma had amassed in the hopes of vengeance. It’s a powerful image that starts off the chapter and feels like classic long-form story seeding, however, we see Akagane meet up with Higuma at the end of this chapter. It feels a little rushed, and the script seems to acknowledge this, with Akagane saying “…IT’S TOO BAD, REALLY. I WOULD HAVE LIKED TO WAIT AT LEAST ANOTHER 10 YEARS FOR THIS”. We don’t get to spend a lot of time finding out about Akagane before he and Higuma into combat, and it cheapens the stakes somewhat as we don’t have enough familiarity with him to detest him.

The content in between the Akagane scenes is surprisingly refreshing and easy reading. What I love is that Hokami includes scenes of Higuma completing mundane tasks with the help of his powers. I love seeing Higuma play his 3DS and checking his phone with the help of his Zaiju, whilst kicking back on a rooftop. It’s also great to see him interact with Ayaha. Hokami doesn’t try to inject any unnecessary romantics into their relationship, rather just have them stay really good friends, and it’s endearing to take in. Having the two converse is a good, natural way to reveal more about Higuma’s past, and drops some other charming facts like Aunt Harama having played the piano to the family with the use of her Zaiju to give her more hands to play with.

Hokami’s art style, especially in this chapter, feels characterized by thorn patterns. A lot of the way that they accentuate characters and environments is through curved lines that meet with a lot of points, especially their rendering of Akagane. The first page opens with a silhouette of this character, looking like a mass of spikes and abstract points, feeling very in tune with the hell-themed aesthetic of the series. Hokami’s rendering of Higuma and Ayaha evokes this but in a more gentle, teenager kind of way. He draws them in very relaxed mannerisms most of the time, like when Higuma drops onto the balcony to surprise Ayaha, but punctuates their body language with sharp edges, like when Ayaha is ecstatic to find Higuma’s photo album. It gives each character a sense of believability and fits in with the overall aesthetic tone of the book.

The fight scene in this book is especially bounding and kinetic. Hokami introduces the scene very calmly and serenely to offset readers. We get a splash image of Akagane, standing still and looking friendly aside for his partially shaded visage. Hokami quickly descends the fight into the series’ typical madness, as Akagane’s smile slowly turns more twisted, and he reveals the molten copper flowing through his body. Hokami draws a fantastic spread of the molten liquid spreading forth in a chaotic splatter, whilst showing Higuma bouncing around to try and avoid it. The two assume their battle positions, with Higuma perched on a tree and Akagane standing, arms spread as the copper erupts from his every orifice in a terrifyingly awesome panel. Hokami balances the weird with great pacing in this scene, resulting in a fight that hits all the usual right notes with a few well-needed eccentricities.

Hokami’s “Hell Warden Higuma” feels like it might be awkwardly speeding towards a conclusion, and doesn’t take the time to flesh out its antagonists the way it does the main characters. However, the quiet scenes are telling, and the action is weird and kinetic. This is still a fun series to indulge in. 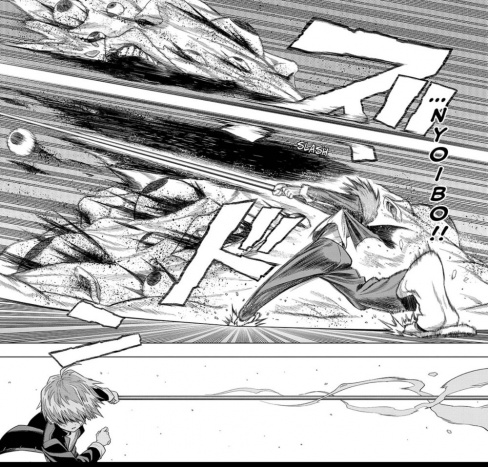 There comes a moment in most Shonen Jump manga in which the heroes mission becomes clear. It’s like when the world opens up in front of LInk for the first time in any Zelda game: you’re provided with all of the lore and world-building you need to set the stakes, and then you’re let loose on that world, destined to make a difference. That’s what this latest chapter of “The Last Saiyuki” feels like.

After defeating the monster made from his own dreams, Ryu-Nosuke confronts a bigger demon in his life: his own father. This is the chapter that explains (to both us and Ryo-Nosuke) just what the heck is going on, and from a flashback depicting our hero’s mother dying to a history lesson of the Saiyuki and their monster-killing weapon the Nyoibo, it feels like a lot is laid out on the table for us. Which is great for not only the wider story but this chapter specifically, because when the Big Bad is introduced in the final few pages, there’s a weight to that scene which wouldn’t have been there without a little backstory.

It’s not an overwhelming volume of information, but there’s certainly a lot to take in. We already knew about Mou, and about Koharu Mori’s powers, but here we get the context of what she truly is. Throughout history, her abilities have been embraced for evil purposes, and Ryu’s father is specifically entrusting Koharu’s safety to his son in order to try and prevent her from turning to the dark side. It’s a neat subversion, but what makes it more interesting is that Ryu’s father explains that they’re not special themselves, not destined for this role, they just happen to have had the weapon passed down to them through the generations. That makes this feel like less of a calling and more of a daunting job, something that gels nicely with Ryu’s own opinions on his newly-acquired burden.

Up until now, we’d only been exposed to one monster. The nature of the premise, however, (a girl can manifest a person’s deepest darkest fears) means that we’re likely to see many, many more. “The Last Saiyuki” chapter 3 puts any fears to rest around whether creator Daijiro Nonoue is artistically up to the task, as we see not one but two terrifying monsters made real, the second arguably more horrific than the first. Over multiple double-page spreads, Nonoue’s art shines with power and imagination, with the creatively gruesome monster near the end of the chapter introduced across a particularly grisly spread. Likewise, there are a couple of close-up shots of character’s faces at highly emotional moments, and Nonoue makes their pain, grief, anger, and relief all appear effortlessly on the page.

“The Last Saiyuki” has had a strong start across this and the previous two chapters. While not everything is lined up and ready to go by the end of this latest installment, all the pieces are there. It promises to be a fun ride, and one worth getting in early on because if the volume of information presented here continues at the same pace, there’s a lot to learn about becoming a monster-slayer.

Final Verdict: 8.1 – A solid chapter that shores up the series moving forward.