This week, Vince and Zach check in on “Zipman” and “Chainsaw Man.” If you have thoughts on this or any other current Shonen Jump titles, please let us know in the comments! 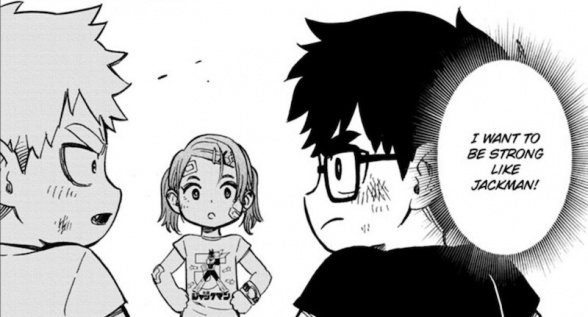 It’s not the most complex or substantial manga series running right now, but week in and week out few current titles charm me as much as “Zipman!!” does. The trio of characters at the center of the series are on their own not super original or groundbreaking, but the friendship between them has been a consistently affecting bit of crafting on the part of Yusaku Shibata. “Zipman!!” returns to pinnacle moments in the childhood lives of its titular characters, to help us get into their heads and see exactly what inspires them. For brothers Kaname and Koshiro, it was their budding friendship with Cheena, a headstrong girl who once saved them both from a bully while sporting a Jackman t-shirt. “Love at first sight” is perhaps a stretch, but this event inspired the brothers to want to be more like her, as well as rival one another for her attention. In this chapter, it’s Koshiro in particular who is in need of rescue, and neither Cheena nor Kaname can do it alone. In chapter 16, everything comes back around to the idea that Koshiro and Kaname fell apart as brothers as they let the rivalry go on for too long and get too heated. Shibata does a terrific job of bringing burning feelings of regret and desperation to change things to a head, making this perhaps the most dramatic chapter of “Zipman!!” yet. There’s a real sense that by the end of this arc, Kaname and Koshiro will be changed as people, and sticking the landing on this kind of introspection can do wonders for longterm storytelling potential.

Balancing out that introspection is some pretty high octane artistic flexing. Shibata shows off with equal parts stunning design work and thoughtful framing of the characters, which informs their feelings and attitudes. Panels from the flashback sequences mirror panels from the present in subtle ways, heightening the emotional potency of them. More superficially, the costume designs themselves have the potential to become iconic. The big bold zippers that run over the various sections of the battle suits are super appealing to the eye, but also serve narrative purposes beyond just their aesthetics. In one horrifying scene, Koshiro is stuck in an excruciating trap, with a big zipper playing a role in adding to the intense body horror therein. The bravura moment for the art comes at the very end, when the villain reveals their true form. Once again, the ideas of zippers and horror are combined in a way that is memorable and impactful. It’s quite a moment to end the chapter on. And in the end, more than anything else, it’s this intelligent blend of great costume design with a real purpose that has me coming back to “Zipman!!” week after week.

Final Verdict: 9.0 – ‘True Feelings’ is a surprisingly emotional and intense chapter of “Zipman!!”, a shonen manga that has far more emotional intelligence than appears on the surface 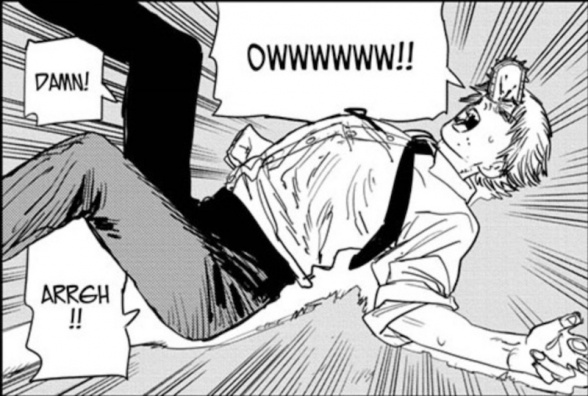 This chapter, titled “Welcome to Hell,” arguably couldn’t be more appropriate! The chapter opens with a series of seeming desperate images; a field littered with severed fingers, an overturned tub, and a sky of assorted doors. We’re immediate clued in that things aren’t quite right, with Denji unable to complete his chainsaw transformation. This sense of foreboding descends into all out dread as the various fiends realize that they are now in Hell. The manner in with Fujimoto depicts the fiend’s distress is fascinating and unsettling. One fiend mumble ominously to themselves, others seem to convulse in pain, while another begs for permission to take their own life. Fujimoto impressively instills a strong psychological terror out of simple interactions. The mundane gives way to the supernatural, as Fujimoto advances toward one of the most bizarre sequences I’ve seen in recent sequential storytelling.

A door opens in the sky and black droplet, the Darkness Devil, falls to the earth. It appears as an amorphous silhouette on the horizon. As it approaches, we find an audience of astronauts has gathered to herald the Devil. Not normal astronauts, mind you, but astronauts that have been severed in half. These transversely bisected bodies stand planted on either side of the Devil’s procession, their upper halves with hands raised in prayer. A frog ribbits and the Devil stands revealed with startling effect.

It’s such surreal imagery. Growing up in a Christian tradition, the imagery of the halved bodies mmediately evokes the Abrahmic Covenant in Genesis. In the story, accounted in Genesis chapter 15, Abraham sacrifices animals by cutting them in half, laying the halves across from each other. In a vision, as a sign of the covenant between Abraham and God, Abraham sees a smoking firepot and a flaming torch pass between the halves. In this case there are astronauts instead of livestock and the flames signifying an agent of God are replaced by the indistinct visage of the Darkness Devil, but the similarities are striking. The similarity becomes all the more relevant as we see this Devil has in fact come to enter into contract (just another word for covenant, after all) with the Doll Devil. I obviously don’t know if this connection is the intent of the author, but I find it fascinating nonetheless.

The final pages return to a sequence from a few chapters ago, with an ominous note written in German. Per Google Translate the note reads “Makima can hear you. The day of doom is near. Kill Mokima.” 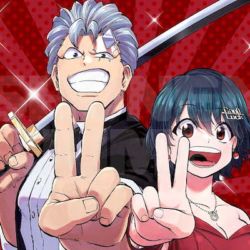 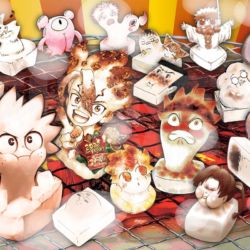 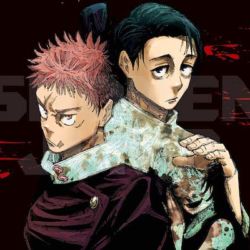