This week, Brandon and Kerry check in with “Chainsaw Man” and “Yui Kamio Lets Loose.” If you have thoughts on these or any other current Shonen Jump titles, please let us know in the comments! 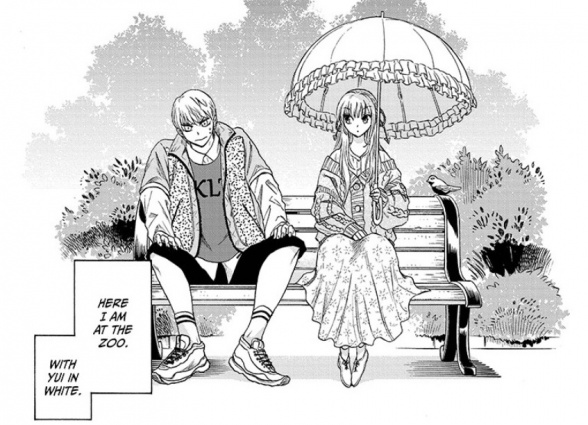 “Yui Kamio Let’s Loose” has a fun premise, but I’m already starting to wonder how Hiroshi Shiibashi plans to keep it up in the long run. The latest chapter is short, which frankly isn’t a bad thing. Kiito and Yui get some alone time for once as the manga falls back on its secondary (for now, at least) premise: a high school romance with a twist. Kiito expressed his interest in Yui (at least to us omnipotent readers) pretty early on in the series, but in chapter five we see the beginnings of him questioning which of the two Yuis he likes most. Thus far in the series, he’s been pretty taken with Yui in white, as almost anyone who meets her is, but there’s something about Yui in black that has him intrigued.

Speaking of Yui in black, this chapter gives us an interesting bit of character growth from her. Up until this point, she’s mostly been a homicidal, if slightly cool, maniac. She’s hell bent on besting nearly everyone she comes in contact, and it’s made her a bit of a one trick pony. However, when fawning over the zoo animals on her and Kiito’s pseudo-date, she almost seems… normal? Kiito notices too, and rather than use the moment to transform her back into the good Yui (what he describes as her “hibernation”), he chooses to leave her alone and not ruin her happiness. Kiito is presumably the first person in her life to ever make this decision; best friend Nao runs herself ragged trying to keep Yui in black under wraps, and at this point we haven’t been clued in to anyone else having knowledge of her split personality (which makes me keep wondering, where are her parents?).

Of course this ends up being a good decision on Kiito’s part, which isn’t that surprising of a twist. The chapter has clearly been setting up Yui in black to stick around a little more long term, rather than stick to her usual brief, convenient stints pummeling the antagonist of the week.

Which brings me back to my original question on the series’ longevity… The obvious answer is Shiibashi will bring more of a focus on the budding romance between Yui and Kiito. There’s some unexplored territory in Kiito’s dilemma over the weird love triangle they find themselves in with her split personalities that could be interesting. However, the gags are going to start getting a bit stale if the manga doesn’t figure out how to merge the high school drama and supernatural/action elements soon. Hopefully it’s just growing pains.

The art, of course, is adorable as always, and definitely a continuing highlight. Shiibashi really excels at enhancing the humor of a situation through ridiculous facial expressions and is especially effective in conveying Kiito’s nerves and uncertainty in this chapter. There’s also a gorgeous full body panel of Yui in black with her tamed lion towards the end of the chapter that had me flipping back to check it out again. If there’s anything negative I could have to say about this series going forward, it’s definitely not going to be about the art.

Final Verdict: 5.9 – There’s still potential, but “Yui Kamio Lets Loose” is going to have to rely on more than gags if it wants staying power. 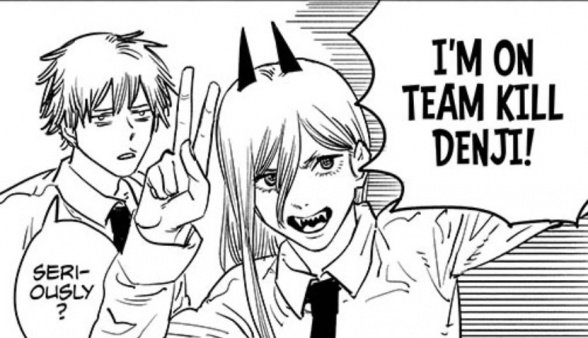 Written and Illustrated by Tatsuki Fujimoto
Reviewed by Brandon Arnold

I’ve been hard on this series in the past, so much so that I quit reading it for a time. But, after giving it a second chance, I’m happy to announce that “Chainsaw Man” has shown significant growth in both maturity and craft.

This week’s chapter, titled ‘Kill Denji,’ succeeds in almost every arena where previous chapters had failed. Here, Fujimoto hits a sweet spot concerning the balance of levity and action where the characters’ dialogue and decisions feel genuine and honest. For example, Power’s self-centered and oblivious nature playfully contrasts with the other characters’ fears and growing paranoia. This makes her non-sequitors and sudden betrayal of Denji feel less like a cheap joke and more like a character-building moment. In fact, all the characters are starting to feel more real. Kobeni and Arai aren’t quite as fleshed out as our present lead characters (Denji, Power, Aki, and Himeno), but I’m not sure they need to be because they’re all starting to serve a purpose instead of serving as panel dressing.

Speaking of panels, Fujimoto’s art is beginning to resemble the art that initially drew me to this series again. It’s not perfect, but his sparse use of backgrounds coupled with his bold character designs feel crisp and refreshing- especially when compared with his muddled sketchy work from previous chapters. Unfortunately, the sketchy-ness still pops up once or twice in this chapter, specifically when the massive, amorphous, pile-of-body-parts devil shows up. I get that we, as the readers, are supposed to be scared and grossed out by it, but its shading and lack of scale just confuses me. In fact, on closer inspection, I don’t really understand Fujimoto’s shading choices throughout; the characters are almost always fully lit, even when the hallway was previously darkened.

Having said that, there is more to be grateful for with this week’s chapter than there is to gripe at. The world of “Chainsaw Man” is also slowly becoming more interesting. Fujimoto doesn’t provide walls of text or chapters dedicated solely to exposition; instead, he drops in bits of info about devils, their rules, and their effects on the world by using Denji, the once derelict “street-punk,” as a proxy for the reader to ask questions and gain a better understanding of the world in which he’s found himself.

Where there used to be a tonal dissonance in this series, there’s now a more appropriate amount of light-heartedness in contrast to the current state of affairs. Characters that were seeming tropey and stiff are gaining more depth and definition, and the art feels less cramped and more dynamic. It’s not a perfect series, but I’m back on board.