This week, Rowan and Kerry check in with “Agravity Boys” and “Moriking.” If you have thoughts on this or any other current Shonen Jump titles, please let us know in the comments! 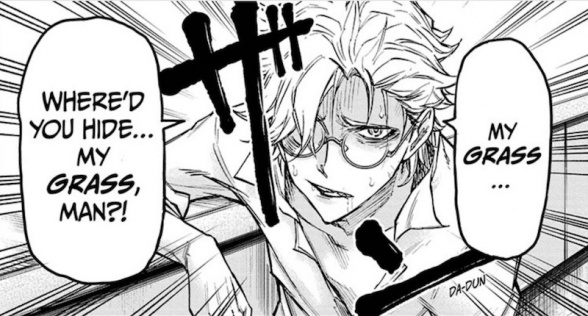 This week’s “Agravity Boys” installment slows down in pace a lot, and exchanges most of the visual humor for more dialogue-centric gags. There’s a decent throughline about the gang here trying to create (or better yet, purchase) a time machine to go back in time and get back to Earth and for the most part, it’s handled interestingly. There’s interesting speculation about a future version of Saga finding the time machine and the concept of going to an advanced alien world to find one is also a neat idea. However, a lot of this is buried under exposition and weird intrusion from gags. While the gags do land, they don’t help us to keep a good grasp on what the plot is trying to tell us.

Let’s talk strictly gags, however. There is a buck wild subplot present in which Saga’s great science hero, Geralt Zerman, proceeds to show up drugged out and ask for more “grass” that he’s “tripping” out on. He then decides that the gang wants to get serious, in which he offers “white stuff” of the “highest” quality. In a Shonen Jump book for kids? It’s bananas and a lot of fun, even though it does make the main plot generally bumpy. There are also some fun moments peppered throughout like Geralt’s B-Boys commenting on him being dissed. One even slightly weaves into the plot, where one of the crew manages to have contacts with the alien planet Alesta only because he was picking up phone numbers of girls that were from there. The book sure displays a spectrum of comedy but handles it well.

The art here is a little less exciting than it has been in past issues, however, not all is bad. There’s some great facial acting present that amplifies the comedy in the writing. Most of the face in the first few pages are pretty tame, with a couple of poorly-drawn shots on Saga to make him funny, but once we get to Geralt’s appearance, Nakamura dials up the exaggeration to eleven. Geralt’s hair is a mess, he’s sweaty and drooling, and he looks like he just might collapse at any second. The crew’s response is appropriately shocked and disheveled, making for some great comedy.

The detail outside of the close-ups and acting is okay and gives detail when necessary, but leaves a lot to be desired in the way of body language and setting. The instances that we do see a landscape in the panel are pretty exciting, and Nakamura injects a good level of forest-y detail. There’s even a fun shot of a time machine in an overgrown forest that I feel might visually call back the time machine in “Dragon Ball”, which is a fun bit of intertextuality. However, these moments are very few and far between to really place us anywhere, and most of the ship’s interior is white space. Similarly, all the character shots are profiles, so we don’t really get them interacting with the space around them, which makes it hard to really connect them to a setting.

Final Score: 6.8 – “Agravity Boys” is still proving to be a fun time but feels like it’s veering towards self-indulgence for the author. There are fun characters and comedy work here, but the rest of the book can feel a little lacking at times. 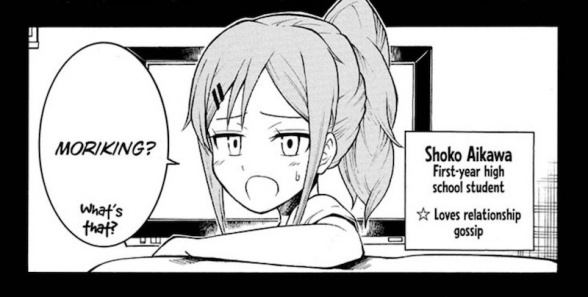 Written and Illustrated by Tomohiro Hasegawa
Reviewed by Kerry Erlanger

Shonen Jump has pretty good timing with the release of “Moriking.” Considering the state of, well, everything, keeping up with your old tried and true series feels daunting, let alone getting into a new one. However, the bizarro cover image of a man with a beetle horn and a crown protruding out of his head made me cautiously hopeful… and boy, was I not disappointed.

First chapters are obviously tasked with laying the groundwork for the overarching plot, but “Moriking” wastes very little time in getting to the action. It starts off with Moriking emerging from his pupa as a full grown man and then flashes back to three months earlier to explain how in the world we got here. I’m not generally a fan of this storytelling trope, but it works in this instance. The truly bonkers opening scene draws you in immediately, what with the man who appears out of nowhere, much to the shock of the two children who are forced to behold his nakedness. How does a larva evolve into a half bug, half human? We never really get a satisfying answer, probably because there isn’t one; Moriking mentions mutations somewhere in his explanation about how he was sent to the outside world to test his worthiness as king (as is tradition). Has this ever happened before? Are there other giant human/bug kings walking among us? It doesn’t seem like we’ll ever know, though the appearance of others like him later on in the story could add some interesting elements. We’ll see.

The pace of this first chapter was a bit frantic. At times it felt exactly right, but at others it felt rushed. There was a lot of ping-ponging worldbuilding nonsense to wade through before we got to the meat of the chapter’s conflict. Parts were definitely delightful, though, like Moriking Spider-Man crawling up the wall to convey to the reader that, despite the appearance of a man, he still retains some of his beetle qualities. My favorite was probably the flashback to the bug kingdom and the explanation of their “ancient tradition.” It was so amusing to see all these random beetles acting and speaking like humans — like The Lion King, but bugs. Another amusing moment was when Moriking was allowed to compete in Shota’s elementary school beetle wrestling tournament. He looked ridiculous standing in the ring among all the tiny bugs, encircled by children. Tomohiro Hasegawa definitely knows how to make his art work to his advantage with these gags. On their own, all of the jokes aren’t overly funny, but they’re able to get there through the illustrations.

My one complaint about “Moriking” is that it’s difficult to envision where it’s going. Will it be a slice of life manga, or something more? I’d be down for either option, though the former format can get a bit tiresome. Still, there are some fun character dynamics to explore (will teenaged Shoko hook up with the beetle man?) and many possibilities when it comes to awkward bug/human interactions. Either way, I’m here for it.

Final Verdict: 8.0 — “Moriking” is wacky and exactly the kind of nonsense needed right now to get you out of your anxiety-ridden head.