This week, Rowan and Matt check in with “Dr. Stone” and “The Last Saiyuki.” If you have thoughts on these or any other current Shonen Jump titles, please let us know in the comments! 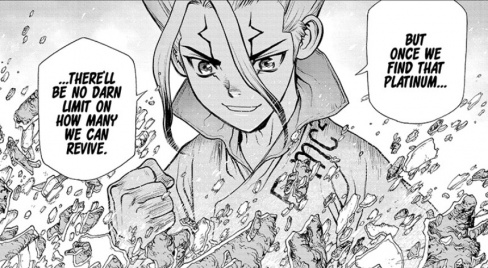 The latest chapter of “Dr. Stone” begins a new, treasure hunting arc in earnest with all the classic characters of the series reunited with a new goal on a scale never before undertaken. Senku still leads his group of scientist revolutionaries, but this time with the goal of simultaneously reviving every human from stone all at once. I love the lengths that Inagaki goes to rationalizing this beyond mere good intentions. Senku and the others explain that the most amount of people that one person can maintain a solid relationship with at one time is 150, so if they introduce more people than that to their community at a slow pace, it will splinter into factions. Hence, Senku decides he will use Platinum to revive everyone at once. Inagaki paints him as this fantastically overthinking human with hints of sociopathic behavior, and I love it.

Inagaki imbues the world of “Dr. Stone” with a real sense of history in this issue as we start to dive into the time period between the petrification of humanity and the present. The history here with Senku’s father lends a lot to the adventure/pirate theme of the current arc, as we get a hint of what Senku’s father did in the past and the things he left for humanity’s future, waiting to be found. Inagaki still tactfully conceals a lot of information about the man, but drip feeds us enough to know that he had all the knowledge of his son Senku but with deep compassion to balance it out. Similarly, having Ruri tell about the 100 Tales gives a mythic quality to the text, despite the fact that it bores Senku to annoyance at one stage. Once Ruri starts to gain momentum and rhythm, it’s powerful and fast paced like a religious hymn.

Boichi, as always, is a delight to have on this series. His character and emotive work are on full display here, and I love how he effortlessly poses the cast in realistic positions. Senku displays a playful, almost sarcastic amount of excitement at announcing his new mission, and appears throughout the rest of the chapter posing in open, thoughtful and ultimately vulnerable poses, suggesting he’s someone who thinks quite highly of himself and is comfortable with his position. I also love the new character, Soyuz, simply because of the way Boichi renders him. He seems to be in a state of constant guilt and shame, holding in the knowledge he knows about the treasure location, but then moves on to become validated and determined once he realizes that he can help Senku and the rest.

The environments are lush and intricate here, however, they feel a little ignored considering the more adventurous tone of this arc. The opening sets a great feel for the chapter, rendering Senku’s ship afloat on a vast, empty sea with an island backdrop. It gives not only a great sense of isolation but a sense that everything in the world around them is something of a mystery. The rendering of humanity’s surviving village is always a fun sight, although maybe a more tired one considering how much time has been spent within it in the past. We get one final great splash page with Senku’s father on the overgrown Soyuz Space Capsule, evoking some great post-apocalyptic imagery. However, much of the other scenes are spent on the ship and feel a little claustrophobic. Space luckily isn’t wasted, however, as Boichi uses this to develop the facial work a lot more. 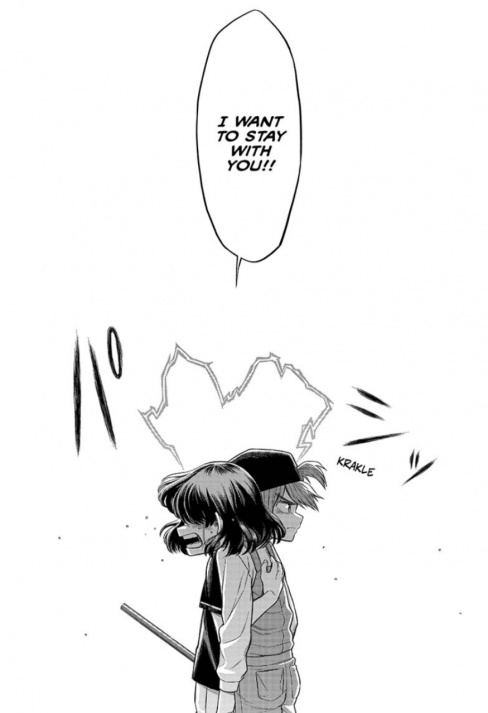 The revelations come thick and fast in “The Last Saiyuki.” With only seven chapters in and so much already revealed, you have to wonder how sustainable this pace really is. Still, it makes for an exciting read as we hurtle headlong into the action and adventure. Following Sai’s devastating reveal at the end of last week, both Ryu and Koharu have a difficult decision to make about their future together. And what exactly is Ryu’s father hiding?!

Reading through this chapter, it’s hard to believe that this is such a young series. Yes, that’s due – in no small part – to the lightning-fast pace of the plot twists, but it’s also due to the confidence and competence of the execution. Creator Daijiro Nonoue has crafted compelling interpersonal drama in such a short space of time (not to mention within a relatively short page-count) that you genuinely care about Ryu and Koharu already.

Still reeling from the drama of Shige “forgetting” all about his new friend Koharu (sob!) the creepy Sai has waltzed into the picture to drop the bombshell that Koharu is his sister who was stolen from him and – oh yes – neither of them is human. Because of this, his reasoning is that Ryu really has no obligations to help Koharu or remain friends with her. We already know by now that Ryu is never leaving Koharu’s side, but the weight of all of this information may be too much for Koharu, who debates whether to rejoin her brother’s side and avoid all of this bloodshed.

The final decision may not be a surprising one, but it is genuinely affecting. Nonoue removes everything from the scene around Ryu and Koharu, dropping them into a void of nothingness as they embrace each other. The world around them literally disappears and electricity crackles between them, a steely determination on Ryu’s face now that they’ve joined together to overcome the first major threat to their relationship.

Following this, they come back stronger than ever, and as they bring the fight back to Sai, the teaser for the next chapter promises to turn the series on its head all over again. But that’s “The Last Saiyuki” for you. Each chapter brings with it new twists that raise the stakes, deepen the bonds of family and friendship, and keep you on the edge of your seat with monsters, magic and action.

Final Verdict: 8.6 – This is easily one of the best Shonen Jump titles of the year, and this latest chapter proves it.