This week, Rowan and Ken check in with “Guardian of the Witch” and “Time Paradox Ghostwriter.” If you have thoughts on this or any other current Shonen Jump titles, please let us know in the comments! 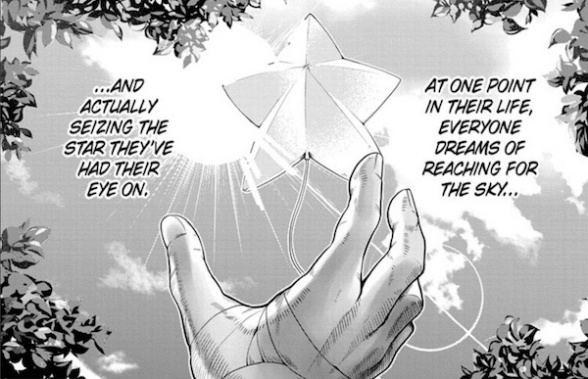 A new series has graced the pages of Shonen Jump. When I first heard the premise of “Time Paradox Ghostwriter” -a story of an aspiring mangaka receiving copies of WSJ from ten years in the future via his lightning-struck microwave- my first thought was “Hey, “Steins Gate,” get out of the way. I’m trying to review this new series.” However, going through the first chapter, it’s really not about that. It’s more about the drive to succeed, and what we are willing to do to get to the top.

Our protagonist is Teppei Sasaki, a young mangaka that is really dedicated to getting a series in WSJ. The problem is that most of his stuff is kinda bland, with little true passion or something interesting to say. He has such an aspiration to create a manga that everyone can enjoy, it turns out to be lifeless. Writer Kenji Ichima does a good job of not only getting us to empathize with Sasaki but also be blunt on the process of how manga are chosen and the years it takes someone and just how much gets left in the dust.

While Sasaki does have some sympathy, one can make the argument he’s also not a great guy since… well let’s face it, he straight up plagiarizes a manga from the May 2030 issue he receives (I did chuckle at the notion of Sasaki not recognizing any of the manga in it, because by that point I expect “One Piece” to have taken full sentience and become OnePiecezilla and take it’s revenge out on a cruel world) and the reveal at the end shows there is going to be some consequences for it. It’ll depend on where we go, but it does slightly sour you on Sasaki, but that could be intentional.

Tsunehiro Date’s art is very good. It pops very well on the page, with every central character having their own aesthetic and visual quirk. In expressing both comedic scenes of Sasaki trying to get a kid’s balloon out of a tree to the more depressing scenes of a defeated Sasaki walking home in the rain hit very well in their respected intentions. While the style is very clean, it’s when you get to the page of the microwave “Ding!”-ing that it has a fresh slice of violating the timeline ready to go, it’s fantastically detailed that conveys both suspense and a bit of lividity at the absurdness of the premise.

Making a first impression is so important and I’m glad to say “Time Paradox Ghostwriter” nails it with flying colors. It’s an interesting (even if I personally found it familiar) premise combined with a protagonist that could really go anywhere and topping it off with fantastic art. Ichima and Date have sold me on it for the time being, and I’m looking forward to seeing where it goes. 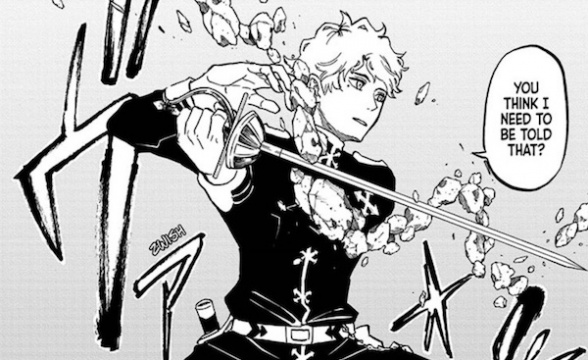 “Guardian Of The Witch” is in a pretty poor place right now, in that the whole manga has been poorly paced and now at this point, it starts to feel like more of a riff on other series like “Black Clover”. The overall tone of the series is strange because it seems to exude self doubt that it can’t hang out with the heavy hitters of the Shonen Jump anthology. There’s a fair amount of overnarrating in this issue which is super obvious and kind of grating. Things like our protagonist noting “He turned the ground into pebbles for his magic!” when we can see visually the ground floating like pebbles with a magic aura is just unnecessary and detracts from the main story. Similarly, the dialogue feels cliche, and even at the end, the villain explaining “The idea of your journey was very rash… it was doomed from the start” seems unfortunately meta as to the direction that this series is going in.

The general premise of the series does hold this issue together, however. The moments in which Fafner is most protecting Manasfa and working together with her are fun, as the two have a genuine, endearing rapport. The moments that Manasfa will suggest a technique to use in battle or create an aid like a flame shield are interesting. They also make the internal monologue from Fafner work for a moment as it’s engaging to read him figuring out how to use these techniques in battle, and immerses us in the world’s rules. The rapport between Claude and the other antagonists is weaker, however, especially in the trite commentary Spica makes on Fafner not seeming like a bad guy regardless of being a criminal.

All of this is a shame because Asahi Sakano’s art is pretty solid across the whole issue. What “Guardian Of The Witch” lifts from influences like “Black Clover” does work well for the fight scenes. The weaponry and equipment used has that gothic/medieval tone and looks super stylish when used in contrast with anime-as-heck protagonists. The sword fighting is fast-paced and exciting, especially in how Sakano uses different fighting styles for each character, depending on their weapon of choice. Claude using a rapier makes him look lithe and nimble, and his quick, decisive and sharp-lined movements reflect that.

Sakano uses some great, haunting imagery throughout this chapter that makes it feel even more stylish than the story conveys. The way that magic creeps and crawls around the panels makes it feel like something truly alien and eldritch, like the way that the Fafner’s flame shield claws out from his arm with a sickly texture. Other moments, like Claude enchanting rocks to float around his rapier in a spiral pattern, look aesthetically pretty and flow well in the panel. My personal favorite moment, however, is the moment Spica lets loose her seed of evil underneath her bandages. Sakano draws this as thick, rich inks spiralling upwards in a chaotic flow that looks striking and conveys the idea that this is something unfathomable.

I’m unsure what to make of “Guardian Of The Witch” at this stage because the narrative seems so out of sync with the art’s quality. It seems like it’s running out of steam especially with the way the characters and story are being handled, but the art and action sequences are stronger than ever. Only time will tell what happens to this manga, I suppose, but at this point I can’t fully recommend it for anything other than the pretty pictures.

Final Score: 6.0 – A weak story held up by stylish and super fun artwork.