This week, Kerry and Robbie check in with “Boys Over Flowers” and “Beast Children.” If you have thoughts on these or any other current Shonen Jump titles, please let us know in the comments! 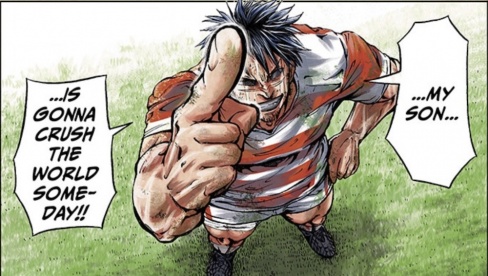 Who’s ready for a sports manga? Yes, the glorious tradition of a manga about people playing sports continues, and this time it’s rugby.

So the story begins with your typical Shonen sport anime cast. We have the main character who’s very in to the sport but lacking true experience (it was either that or a newbie with no interest who’s especially gifted at it, given the typical tropes), a supportive friend who’s not into the game yet, and a mysterious ace who will inevitably whip them into shape.

With that said, the characters aren’t bad. The protagonist, Sakura, is the type to get lost in his own world when he’s drawn into something, which in this case is rugby. Even with no one to play with, he’s practicing what he can, although not tackling. The mysterious new student, Yukito, is obviously talented at rugby and knows a lot about it, but says he has no interest in playing. While the reason is obvious, it’s revealed at the end of the chapter, so it’s not like it’s being saved for a later revelation.

As the first chapter, it’s important for “Beast Children” to get us invested in these characters and their journey. It hits the right steps of establishing who they are and what they do, while providing a fine motivation for Sakura and giving us enough of his personality to like him. It’s a good enough start, but there’s nothing out of the ordinary about it either; it’s your standard sports manga introduction. (But then, not everything can be “Slam Dunk,” so we can cut it some slack.)

What’s equally important to a sports anime is artwork that can bring out the action of the game. Considering the first half of the chapter is Sakura playing by himself, we don’t get much of that at first, but that changes when Yukito appears. That’s where we get more action and dramatic lighting, right down to a sudden rainstorm when the conversation grows serious. The artwork does a good job showing movement, through action lines and afterimages, but the impact of rugby is what matters most. For one moment, we get an intense tackle scene with all the dramatic effect you’d expect from a sports manga and… it’s pretty solid.

The characters also come through in their expressions, particularly wide-eyed Sakura, who holds none of his enthusiasm back. But there’s also a good amount of detail put into their designs and the increasing level of dirt and mud that covers them as the game goes on, making the audience feel worn out with them (in a good way, naturally). Overall, it’s solid artwork for a decent start to the story.

Final Verdict: 7.2 – A pretty standard sports manga, but features solid character work and good artwork. If you’re a sports manga fan, it may appeal to you. If not, it might not be the one to pull you in. 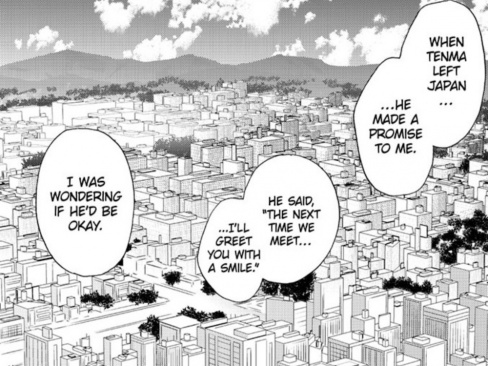 “Boys Over Flowers Season 2” is really leaning into all the typical shonen/shojo manga tropes — which is not necessarily a bad thing! In the previous chapters, we had newly burgeoning, tentative high school romance almost led asunder by a misunderstood interaction with a third wheel romantic interest and in chapter 97 we have… a newly burgeoning romance potentially thwarted by an interaction with another romantic interest. As the saying often goes, if it isn’t broke, then why fix it?

Not to speed things too quickly along between Haruto and Oto (who shared a bed in the previous chapter, but supposedly nothing untoward happened, because remember, this is a manga and most sexual tension is dealt with through characters blushing at each other fully clothed), the Correct 5 gate crashes their romantic getaway by showing up unannounced at their Los Angeles hotel room. Side note: I love that all these kids are just last minute randomly hopping planes from Japan without their parents and seemingly without plans. I get that they’re rich, but still. Who’s in charge here? The parents from Charlie Brown? Anyway, I digress…

The bulk of the chapter serves as filler and set up, which has the negative impact of making it a little boring. With Oto and Haruto’s love triangle snafu sufficiently dealt with, we’re given some new drama in the form of a love triangle between Airi and her two potential suitors, Kaito and Tenma. Tenma has already served as a source of jealousy for both Oto and Haruto, who are impressed by his confidence and good looks, but now it’s poor Kaito’s turn when he realizes how obviously taken Airi is with him. One of the upsides of this is that we get to see a little boyfriend/girlfriend commiserating between Haruto and Oto over their friend’s obvious discomfort; the downside is Kaito decides that a few hours in Los Angeles is enough for him, and he’s heading back to Japan, leading to the chapter’s (predictable) cliffhanger ending. Oto will presumably have to bear the brunt of this drama in the next chapter, since Kaito reveals his reasons for leaving to her, but also because she’s the only other female character currently in this group. She’ll likely be given the matchmaker role, although I’m hopeful Yoko Kamio might turn that trope on its head a bit and make one of the boys do it (probably Haruto). This is a shonen manga, after all, geared towards boys, so it wouldn’t be out of the question to have a male character take on that role.

The funniest moment, to me, in what is not really supposed to be a funny chapter happens when Tenma shows the group around his school. The campus includes amenities like a rock climbing wall, multiple tennis and basketball courts, a skate park… “Just what you’d expect in America!” one of the boys (I think Eiibi?) exclaims, to which I respond, “In what world?” I’d love to know if this is actually what Kamio thinks American schools are like in real life and not just ‘90s teen movies? I would also like to know why he draws his characters’ eyes so far apart? Questions, questions.

Final Verdict: 6.5 — Sort of a boring chapter, owing to the fact that most of it is set up, but overall this manga still holds my interest with the promise of sweet, sweet future teen drama.