This week was a particularly slim week, so, Zach and Vince check in with last week’s “My Hero Academia: Vigilantes” and “One Piece.” If you have thoughts on these or any other current Shonen Jump titles, please let us know in the comments!

“My Hero Academia” has always played with western super hero comics tropes with great success. So on a metatextual level, it was no surprise when a spin-off series was created in the form of “Vigilantes.” In this latest chapter, that metatextual association doubles down, as “Vigilantes” begins a “crossover” story. To clarify, I don’t mean crossover in the traditional western comics sense, where two separate comics intertwine to tell a single story. Rather, we have a crossover character in the form of Shota Aizawa, aka Eraser Head.

This chapter begins a flashback arc diving into Aizawa’s school days. Beginning in a time before Aizawa takes on his teaching post at U.A., he begins to reminisce about his time as a student. As the flashback begins, we see Aizawa wrestling with helping a kitten, abandoned in the rain. Furuhashi uses the metaphor of taking care of a kitten to highlight Aizawa’s self-doubt as a hero. He agonizes in great detail on the various responsibilities caring for a pet entails, and reflects on his own inability to handle such responsibility as a youth. It’s a powerful idea despite its simplicity, and the point is brought home stronger still thanks to the imagery of Betten Court. There’s a quiet solemnity in the pages where Aizawa, unable to give of himself fully, leaves his umbrella for the kitten.

It’s notable how much this chapter feels like a story from the main “My Hero Academia” series. Betten Court’s style strongly mimics Horikoshi in the best ways possible, while also possessing a unique flair of its own. The present day sequence, in which a werewolf-esque villain chases Koichi, has almost a gag-manga tone that is present in many spin-off manga series.

Going back to the crossover idea, this story does have roots in “My Hero Academia” proper. In chapter 217, Yamada makes note of a mutual friend of Aizawa, one Shirakumo. This thread has not been touched since, but here in this chapter we are introduced to Orobo Shirakumo. Shirakumo’s buoyant and joyfully flippant attitude matches his cloud based quirk. He’s the perfect foil for the dour and doubt ridden Aizawa. There’s a great moment in this chapter where a thoughtful action by Shirakumo leaves Aizawa in momentary doubt over his recent actions with the kitten. A moment later we find that Shirakumo acted where Aizawa could not. It seems that Shirakumo will be a key figure in inspiring the heroic Eraser Head that we know from “My Hero Academia.” In that way, this chapter is crucial reading for fans of the main series.

Final Verdict: 8.0 – A fun and touching look into the history of a franchise fan-favorite. 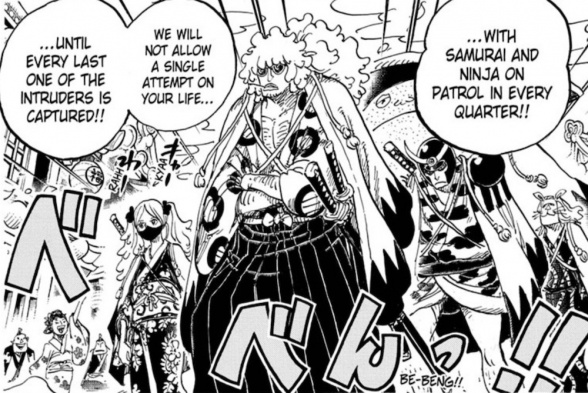 Before we begin, I must call attention to the best part of this chapter, which actually has nothing to do with the story itself. The chapter opens with a two page spread, presumably both lovingly illustrated in great detail and colored by Eiichiro Oda, depicting a “stampede dinner” – sort sort of bizarre food fight between the principle characters of the series featuring goofy imagery and some fun easter eggs. There’s seemingly no reason that this spread exists other than Oda wanted to draw it, but it carries with it a bonkers energy that perfectly prepares you for reading any “One Piece” story. It’s the extra stuff like this that makes Oda such an especially satisfying artist to follow.

The actual story that unfolds after is more of the insanely dense, constantly moving plot that we’ve come to expect from “One Piece” and it’s still very good after all these years. Oda accomplishes a staggering amount over 16 pages, in both momentum of plot and depth of character and flavor to the world of Wano. Each individual page feels consciously dedicated to getting at least one thing across to the reader. In fact, if I have any consistent criticism of “One Piece” it’s that so much character is packed into the panels that the art doesn’t always breathe. It’s great to look at, but clostrophobic to a fault. Still, despite his panels being packed to the gills with detail, Oda always seems to take at least a page here and there to establish the location with a little sense of grandeur. Take the opening page, which shows the towering Flower Capital of Wano, with its large, winding tree dwarfing the homes and buildings around it. But then Oda drops down into the bustling town and shows us how things have changed since the Straw Hat pirates and their alliance came to Wano. In this chapter, they’re filling the town with fliers and putting an “all points bulletin” out for the rest of their crew, intending to capture all of the so-called intruders. Recall that Luffy has been in captivity for a few months (our time, not manga time) now, but whether we see what he’s up to or not, the series’ pacing never lets up and you never feel like his story is the most important one. In other words and to pull a phrase from The Simpsons, no one is constantly asking “Where’s Luffy?”

In fact, taking Chapter 951 as a whole, the most important development probably happens on the “villain” side of things, where Big Mom comes face-to-face with a rather intimidating ghost from her past. Big Mom has been a divisive character in the “One Piece” discourse, with a common complaint being that she’s too one-note of a character. I think I mostly agree with that criticism, all things considered, but this chapter actually might be a sign that Oda has a bigger vision for her. Whether it’s a story that he’s had in mind all along, or something that he made up on the fly the longer he decided to keep Mom around, it’s another impressive case of “One Piece” continuing to fill out its cast with interesting wrinkles, even in places you may not have expected or were skeptical of initially. This segment also supplies the most impressive art of the chapter, as Big Mom and her rival clash in such a way that the heavens split above them, sending shockwaves through the ocean below. It’s a reminder that as silly and whimsical as “One Piece” can be, it’s no slouch when intensity is called for.

Final Verdict: 8.0 – If you’re not reading “One Piece” by now, you’ve probably just decided that it’ll never be for you. But few series out there offer you the density of a read this endlessly rewarding. It’s almost too much.