This week, Ken and Robbie check in on “The Promised Neverland” and “Tokyo Shinobi Squad.” If you have thoughts on these or any other current Shonen Jump titles, please let us know in the comments! 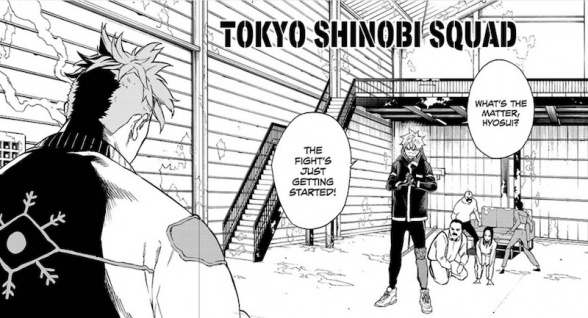 For the past ten chapters, we’ve been introduced to Jin and his team, the Narumi-Kai. Each one has been given a chance to show how tough they are, while demonstrating a range of jutsu techniques. This firmly established their power levels and reputation, so we know where they stand in the hierarchy of power.

As such, it’s finally time for a showdown with a foe they actually view as a threat. Hyosui has been built up as just as dangerous and renowned, so we get to see Jin in action against a foe who could very well outmatch him.

90% of this chapter is showing off Hyosui’s ice techniques, and one thing I must give “Tokyo Shinobi Squad” credit for is how much mileage it gets out of its different jutsus. We’ve seen Hyosui’s ice powers used to freeze surroundings and freeze people to death, now we get to see a wider range of techniques, including defensive, melee, and ranged moves. It all comes from the same basic powerset, but it’s used in varied enough ways to be interesting.

We’ve seen similar things with the many ways Jin uses his electric powers, so it’s a good matchup. We’re also briefly shown a tongue-based jutsu that, well, essentially turns the user into Toad from “X-Men.” Then there’s Papillon, whose techniques involve manipulating thread. While that also gets some neat uses, including mobility and restraining foes, it’s hard to deny that it’s primarily used to show a female character in a state of half-undress.

The threat level does build up well throughout the fight, as we see Jin take damage and acknowledge that he’s at risk, while the dropping temperatures threaten the rest of the team. As such, the chapter does a good job establishing Hyosui as a threat so Jin’s likely victory in the next few chapters will feel more earned.

Dialogue-wise, there’s not much in the way of engaging conversations. It’s your typical mid-battle banter, ending with your average shonen “no matter what happens he’ll never give up” speech. Nothing remarkable about it, but it works for what it is.

Kento Matsuura’s artwork is on the above-average end of the shonen manga scale. The character designs are one of its biggest strengths, with distinct looks for each of the characters that capture their personalities nicely. Naturally, Jin and Hyosui get the lion’s share of the focus, with large shots showcasing their techniques. Hyosui’s design slowly changes over the course of the chapter as he gets more and more encased in ice, providing a good visual representation of how he’s powering up.

Even then, we get some good moments focusing on other characters, like when it shows the frog tongue technique in action. The artwork really hones in on the shading and detail when it focuses on Jin at the end, highlighting both his wounds and determination.

All in all, “Tokyo Shinobi Squad” is a perfectly enjoyable shonen manga, although it has yet to do anything entirely remarkable. For what it is, it’s a good fun series, with some clever uses of various ninja techniques, solid artwork, and likable characters.

Final Verdict: 6.7 – Solid buildup of threats, good action and artwork, and a nice range of uses of characters’ abilities makes this a fun chapter. 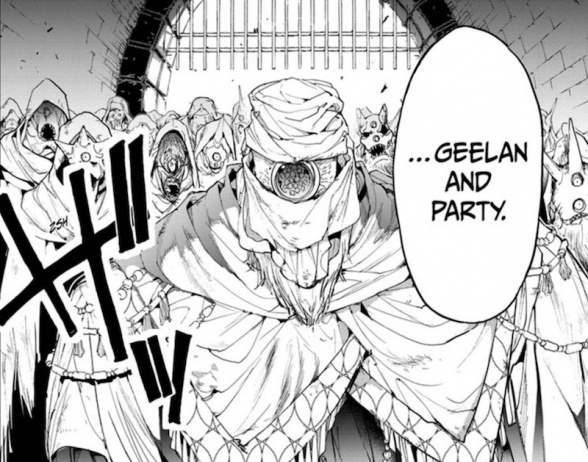 The Promised Neverland Ch. 146
Written by Kaiu Shirai
Continued below

For a bit, “The Promised Neverland” had felt like it had lost its way a bit, losing some of the razor sharp tension and horror when it was becoming more action oriented and the world rapidly expanding. Having said that, the series has been rebuilding speed with the return and changes in Norman, the new William Minerva, as he and his troops begin their assault on the capital. While this chapter is very much about building up, that doesn’t mean Shirai and Demizu skimp out on the detail and interest.

As said, while this chapter is very much multiple action scenes and certainly doesn’t drop any massive bombshells like the ending to chapter 145 did, it still carries itself, the art from Demizu in particular. There’s a multitude of designs going on in this chapter, with a variety of demons and their masks, from Geelan and his rebels to the nobility to the ordinary (demon) citizenry of the capital. It takes an imagination and skill to make all of that feel unique and Demizu manages to pull it off. On the action level, Demizu doesn’t go crazy in the layout department as some other manga can go, but the simple actions are made up for by brutality. One in particular is a demon being stabbed through their mask creating a very bloody and gruesome sight.

While one can praise the unique designs being brought to the demons and humans, it is starting to highlight a slight concern with the series. With the variety of demons and humans and the factions that are composed of members from both species, it is starting to get weighty around here. Because of that expansion, the book doesn’t really have the same kind of horror vibe it once had. If you are a fan of that style, it’s safe to say we’re not going to be going back to that level any time soon. It’s not a deal breaker, and “The Promised Neverland” is still one of the better mangas in Shonen Jump, but this turn in the series makes it feel a bit more… ordinary.

Final Verdict: 6.0- While not as impactful as the previous chapter, Shirai and Demizu begin the build up with good action and design work.