This week, Robbie and Ken check in with “The Last Saiyuki” and “One Punch Man.” If you have thoughts on these, or any other current Shonen Jump titles, please let us know in the comments! 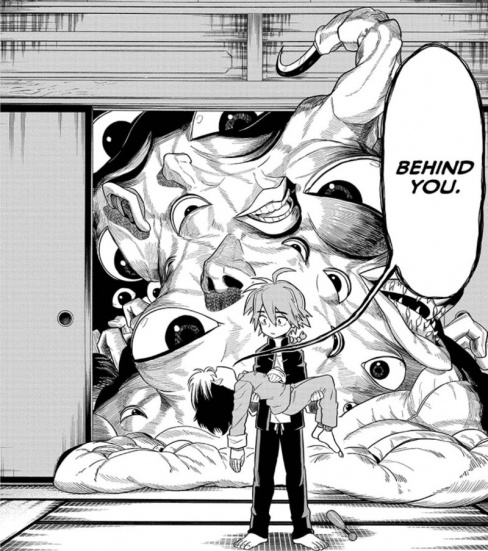 It’s time for a new series! With that, we have many points to hit. Does it introduce the story well? Can we connect with the characters? Does it catch our attention enough to keep reading? Well, with “The Last Saiyuki,” the answers are: yes, a little, and I guess so.

The story definitely begins with a powerful hook. A girl with prosthetic limbs and a mask covering her face, with a voice that can destroy the world. We see a city on fire and a hulking giant lumbering somewhere in the distance. It’s an impressive start both as a way to bring readers into the story and visually.

Unfortunately, the rest of the chapter’s start is a little less engaging. We meet Ryunosuke, the child protagonist, and learn a little about his driving motivations (dead mother, baseball, “you can do anything,” you know the drill). Then we get the plot point that disrupts his life and starts the plot – in this case, his father adopting a girl whose eyes and limbs don’t work (Koharu) and suddenly requiring Ryunosuke to watch over her at basically all times.

So there’s a lot going on here, and that’s even before the supernatural elements are introduced. Ryunosuke is upset, and it’s hard to blame him, but taking it out verbally on a disabled girl who can’t reply doesn’t entirely help. Then his father also just dumps it on him out of nowhere while, as we learn later, withholding pretty important information about her. So he doesn’t exactly become a likable character either. Basically, Koharu is the only likable character due to her innocence.

But things do get more interesting when her powers get introduced. The monster design is properly horrific, an amalgamation of facial features in an amorphous blob. This is where the art starts improving as well, with more shading and action lines to bring out the intensity of each moment.

Daijiro Nonoue’s artwork isn’t bad for the rest of the chapter, just unremarkable. There’s a decent amount of depth to the artwork, and the characters have creative designs more often than not. Ryunosuke’s face is large enough to make him particularly expressive, so he gets the widest range of emotions, which comes into play frequently. The detailing on Koharu’s prosthetic limbs are also nice and help add a distinct layer to her design.

Overall, though, most of it is your typical manga designs and style; aside from the little extra depth to the details, it’s neither particularly outstanding nor detracting. The best parts come through in the monstrous designs and Ryunosuke’s expressions.

One other note of interest is the decision to make the protagonist a third grader. Typically shonen series have teenage characters, usually in high school, so this is definitely on the younger side. Yet it’s unafraid to put children in danger and get them hurt as well, from Koharu literally using her head to move a metal bar to Ryunosuke getting his cheek slashed by a monster. The youth of the characters definitely raises the emotional stakes.

Koharu’s mysterious power and the foreshadowing from the start of the manga is enough to keep readers intrigued, even if there are a few moments in the middle that made some characters less than likable and conflicts that could be avoided with just a bit of communication. The artwork is fine, with a few standout moments, so it’s got enough going for it so far to be worth reading another chapter.

Final Verdict: 6.5 – A decent start, with a few moments of powerful art and an intriguing storyline, but also some moments that didn’t have the intended emotional effect. 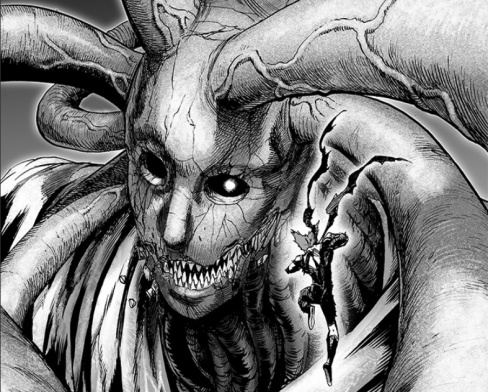 One Punch Man Ch. 90
Written by One
Illustrated by Yusuke Murata
Reviewed by Ken Godberson III

Talking about “One Punch Man” Chapter 90 is a bit tricky because, despite the 70+ page length, it’s hard to say that a whole lot actually happens. Garo takes on the Monster King Orochi in an attempt to push Garo beyond his limits. There are some moments between Garo and Gyoro that gives a little incite to the background of Orochi, but the big centerpiece of the chapter is the show of resilience that Garo shows in this fight. He just keeps getting back up, despite all the punishment dealt to him.

Like many chapters before it, the star of this book really is Yusuke Murata’s artwork. The man has commanded such a high detail to his work. A lot can be going on any page but it never feels overbearing. Something in this chapter that Murarta really nails is sheer scale. There is such a difference in the sizes between Garo and Orochi and you feel it, whether it’s Garo jumping into one of Orochi’s mutaiting jaws, or just Garo or Gyoro standing at the base of Orochi’s feet as they begin to split into a variety of giant serpents. Orochi itself is a wonderous drawing from Murata as it’s constantly shifting from giant lizard man to something more and more eldritch.

There is no denying it: the plot side of One Punch Man can drag a lot and this chapter you really do feel it. It at times feels like an excuse just so Murata can draw loads of fight scenes. If you are okay with that (and trust me, Murata’s fight scenes are worth the price of admission), then this chapter serves its purpose well. However, I don’t blame anyone who feels like this chapter came and went like a breeze.

Final Verdict: 7.0- Murata continues to be a king of art, even if the plot itself does feel dragging.