This week, there were no new strips due to Golden Week, but Kerry and Brandon check in on the latest chapters of “Hell Warden Higuma” and “Boys Over Flowers.” If you have thoughts on these or any other current Shonen Jump titles, please let us know in the comments! 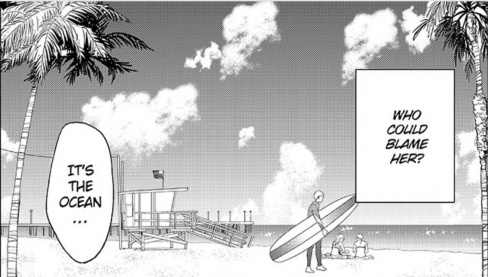 Ah yes, the time-honored tradition of sending your characters on vacation to move the story along. Don’t get me wrong, I’m a huge fan of this trope; there’s nothing like seeing your favorite characters (and, if you’re lucky and you care about that sort of thing, ships) out of their element and out of their uniforms, swapping their usual duds for some easy, breezy beachwear while they hash out the same conflicts in a different setting. Just think about it — how many of your favorite manga series have done exactly this, or something similar? I’ll wait while you tally them up.

It’s not a revolutionary idea, nor is it relegated to fiction only. Travel as life changing momentum is a trope based in the real world. Every year, (mostly young) people travel the world as a way to clear their heads, gain some perspective, and gain some experiences. It’s such a cliche that the British even have a term for it (Gap Year).

This is the beach vacation, travel as forward motion moment for “Boys Over Flowers Season 2.” We come to our heroes with the trip already in progress and with poor Amie having had her heart broken by Haruto (that jerk) back in Japan. Of course, newly appointed girlfriend Oto sees them hugging and gets the wrong idea, but that conflict appears flimsy and indeed is rectified by the end of the chapter. It mostly served as a cliff hanger for the previous chapter, anyway.

Oto seemingly has gotten what she wants — Haruto — but what does it all mean? Her friend, Tenma, relays a lot of information about how moving away from their home country of Japan made him a better person. Everything in his new life fits; he says he’s making his own decisions, and that leads Oto to wonder if she’s doing the same. And because she’s on a beach, abroad despite her mother’s wishes, chatting up an old friend in a cute sarong, she quickly comes to the decision that she will tell Haruto that she was hurt that he hugged Amei. Which she does, not long after stuffing her face full of hamburger, because Haruto has the serendipitous idea to show up at Tenma’s school to look for her. That leads them to resolve the Amei issue and a few others. Again, it’s a bit of a ploy to move this plot along, but it’s almost appreciated. I’d rather see a confident female character, strolling along the beach with her boyfriend, than one who’s unsure for several chapters about her place in the world just because her boyfriend had the audacity to hug a female friend.

The art, of course, is adorable as always. I do enjoy getting to see Yoko Kamio flex his muscles a bit drawing different background scenery than we’re used to. The palm trees and surfers are fun, and make me wish I was on a beach vacation too. There’s also the scene where Oto attempts to eat a three-patty hamburger, which Kamio successfully draws to great humorous effect.

But oh, why does Kamio draw Tenma more attractively than Haruto? Does it bother anyone else? Maybe he’s just more my type.

Final Verdict: 7.0 – “Boys Over Flowers Season 2” is still pretty darn cute, and exactly what you want from this kind of manga. 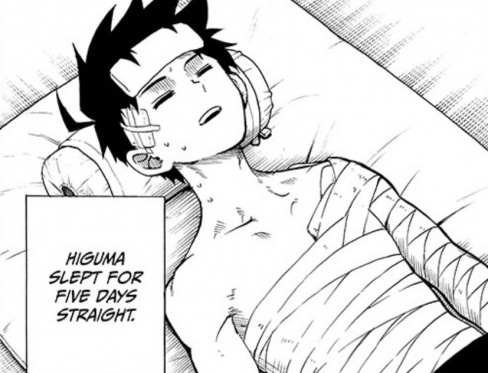 “Hell Warden Higuma” is a relatively new strip, but you wouldn’t be able to tell that if you picked it up this week. This series’ characters are fleshed out and complex, and the world they inhabit is rich, magical, and, most importantly, unique. The latest chapter of “Hell Warden Higuma” is full of the things this series does best: character moments, plot development, good pacing, and light art.

Let’s get the negative stuff out first. The first seven pages of this chapter are the weakest. Hokami’s art is competent, but it’s bogged down by indistinguishable and boring backgrounds. As Ayaha runs through the woods, the action and plot is hard to follow as heavy blacks and and strange camera angles disorient the reader, and random jumps from setting to setting and character to character don’t help. Ultimately, this section feels forced in an effort to set-up future plots lines and get to the actual substance of the chapter.

Afterwards, the book hits its stride. The rest of this chapter reveals the true strength of Hokami’s storytelling: his writing. Sometimes, it’s difficult to get believable and natural dialogue in translated material, but that doesn’t happen so much in “Hell Warden Higuma.” While some of it feels stilted, the exchange between Ayaha and Higuma is genuine and character driven. Higume’s carefree attitude regarding his life and work plays wonderfully against Ayaha’s sense of justice and responsibility. Moreover, woven throughout this dialogue is information regarding the rules about Higuma’s powers and his family’s history, but it doesn’t feel like exposition. Unlike other series where entire chapters are dedicated to walls of text that only serve to educate the readers, this doesn’t feel like force-fed world building.

By the way, this is where Hokami’s art shines as well. Like I said, his art is typically competent but not spectacular. His action is muddled, and his character designs are uninspired, but his character work is convincing and emotional. He’ll quickly juxtaposes Ayaha’s over exaggerated anger with a simplistic and cartoony style for Higuma, giving extra weight to each of the characters’ qualities. Most of the panels have minimal to no backgrounds, allowing the characters to dominate the page.

This chapter does a lot to deepen to the world of “Hell Warden Higuma” and raise questions regarding the future of the protagonists. Even the worst parts drive the series forward, and the best parts both satisfy in the moment and lay groundwork for the future.