This week, Ken and Robbie check in on “We Never Learn” and “My Hero Academia.” If you have thoughts on these or any other current Shonen Jump titles, please let us know in the comments! 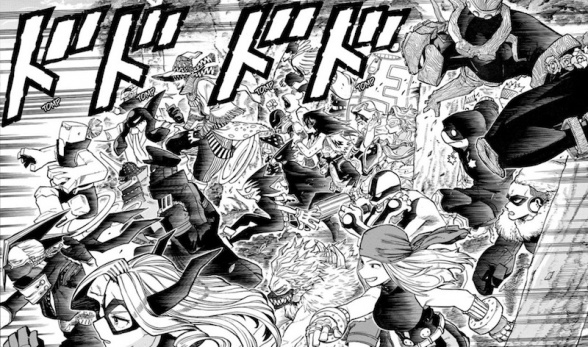 “My Hero Academia” lives and dies on its characters. When we dig into them, the book is more on fire than ever. And while that is not the only strength this series has, it is the one that makes me want to talk about it, especially when it is chapters like this one. When you combine it with fantastic art, it’s when this series earns all the accolades it gets.

Denki Kaminari is a bit of a coward. Not one that is annoying like Mineta, but his lack of confidence and bravery in battle are some of the biggest traits that haven’t had a chance to be explored. So when he and his electric powers are needed and he is dragged by the adult heroes into the front lines he is, to put it in the most blunt way, scared shitless. Horikoshi’s artwork goes a long way with Kaminari’s facial expressions in this chapter, showing someone that is afraid but this time not in a comedic way or to be taken lightly. This is a character who would very much rather be anywhere else, thanks!

Anxiety and fear suck. I can say that with first hand experience in how they can paralyze you sometimes. Having said that, having people around you to help lift you up can be invaluable. And that’s the key for Kaminari, his friends. As Tokoyami tells him, Kaminari shows a deep care and devotion to his friends and they in turn rely and care about him, even when he feels low.

While the interactions with Tokyoami are good, it is the very brief but very powerful moment between Kaminari and Jirou that I want to talk about, because this chapter is also a call back and pay-off to the School Festival arc when Jirou’s own lack of confidence was a centerpoint. The relationship, whether you consider it purely platonic or romantic (although, this chapter confirms the most important person to Kaminari is Jirou), between these two has been one of the best, most organically developed ones throughout the series. It’s one rooted in good friendship, that see each other’s faults and helps compliment them without being overly reliant and allowing for separate character arcs, which makes the moments between them all the better.

All this great character work is complemented with some of the best artwork in the series in a bit. Horikoshi’s line work is clear and crisp, making for some real fun battle scenes. There are two moments involving are central character that stand out, the first being the big moment between Kaminari and Jirou, which is perhaps Horikoshi’s best drawings of these two. The follow-up, when we get to see Kaminari out on the field in a dynamic single-page spread, it really feels like a visual and emotional peak for the character.

The characters of “My Hero Academia” are the soul of the series. The amount of characters in this series and what they can do can be overwhelming at times, but when we finally get to see character beats payoff, that’s when this book is truly special. Denki Kaminari felt like a star in this chapter, helped along by the bits of growth over the years that made one want to root for him to finally shine.

Final Verdict: 9.1- Fantastic character and relationship development combines with beautiful art to produce one of the series best chapters. 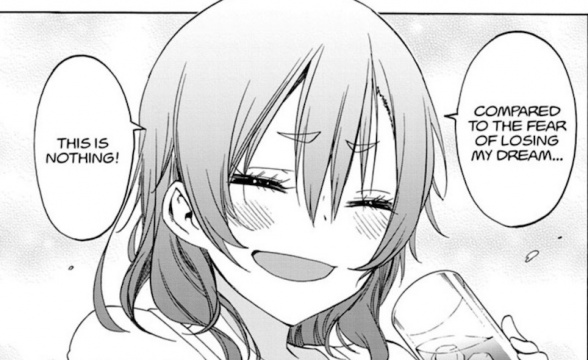 If I was reviewing last week’s chapter of “We Never Learn,” I would have given it high marks. I’ve complained about this manga before, but my complaints have been about its wasted potential – any good character moments were undercut by poorly-timed fanservice or moments that put the characters in compromising positions. But it seemed as though “We Never Learn” was making a change for the better, as characters confessed their feelings and – surprisingly – protagonist Yuiga made a choice. Characters came together to support his decision, feelings were expressed, and the characters even shared a kiss, believe it or not. At long last, we were getting actual emotional moments that showed character growth!

This week’s chapter was a bit of a time jump, skipping ahead to the characters reuniting after a few years of studying and pursuing their dreams. We get to see how they’ve grown (or failed to grow, in some cases), and it’s nice to see how far they’ve come. It’s a sweet reunion, satisfying for anyone who’s followed the series to see.

Mind you, the artwork scarcely reflects that. Some characters get minor design changes, but overall they’re still so similar to how they normally look that it’s hard to tell how much they’ve grown at all. Yuiga is slightly taller, some characters have longer hair, but overall the character designs are mostly unchanged from their high school versions. Taishi Tsutsui’s artwork is still very clean and expressive, if slightly unremarkable as far as manga artwork goes, so there’s nothing to complain about there.

What matters most is the characters, as this romantic comedy manga ostensibly reaches its end. Yes, it does return to the supposed gags of “oh look, the teacher is in a maid outfit and is embarrassed, how funny” and “now the lady characters are falling on the protagonist” that are entirely uninspired, but at this point it’s more of a callback and last hurrah to remind us of how often it’s happened before. It doesn’t advance the plot, but it might be nostalgic for people who have enjoyed those scenes. Fortunately, we get past that quickly enough as Yuiga and Uruka reunite and bring their romantic arc to a close.

Or so I thought.

But then the manga had to undo any goodwill it gained from these past few chapters. Instead of making a choice on a winning girl and giving us a proper conclusion, it’s taking the coward’s way out.

That’s right. This isn’t an actual ending. This is one of five endings.

That means we’re going to jump back in time, undoing all the actual character growth, decisions, and drama to do it all again with a different girl. We’ll have to live through it all over again, with Ogata, Furuhashi, Kominami, and even the teacher, to my dismay.

“We Never Learn,” you absolute coward of a manga. Pick a girl, pick an ending, and stick with it. I honestly don’t care which girl wins, as long as it’s an actual conclusion.

And look, I get it, there’s no way to write an ending that will satisfy everyone. Shipping wars have been the bane of romantic comedy manga since day immemorial; there are still people complaining about what ships sailed or sunk at the end of manga like “Bleach” or “Naruto,” so when there are multiple options with their own fans, you’re always going to have some dissatisfied fans. But to take the coward’s way out and say “Hey, here’s an ending for each of them, just pick your favorite!” is poor storytelling.

This isn’t a dating sim with replays and different routes. Maybe if the remaining four endings were printed as extra “what if” volumes later on, it wouldn’t be so bad. But by saying that this was just one way the story could have ended, then going back to do it all over again four more times with different characters, “We Never Learn” tosses aside all the character growth and drama it actually managed to give itself.

All the good will from the past few chapters was flushed away in just an instant.

Final Verdict: 2.0 – I’ll give it 1/5 of the maximum score for giving us an ending then deciding it’s only one out of five endings. And just when I was ready to give it credit for the ending it had, too.