The shortest month of the year managed to feel packed to the brim with comics announcements and news! That’s right folks, February 2020 was a hell of a time. We’ve had some great announcements for upcoming comics events that look like having absurd, wild fun is back in fashion again. We’ve had one of the tightest and most enjoyable comic book movies hit in a long time that finally seems to start bucking the patriarchal gaze. We’ve even had one long-running industry great bow out of his co-publishing role in an unexpected turn of events!

It’s been a jam-packed start to the comics year, and especially with this month! Let’s have a closer look at some of these infamous events. 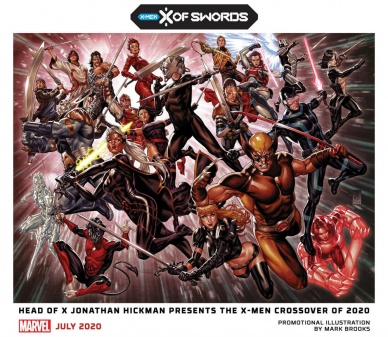 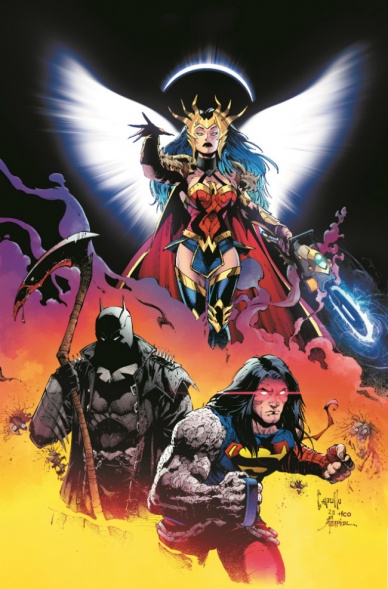 Best Crossover Announcement: Tie between “X Of Swords” and “Dark Nights: Death Metal”
Crossovers and event comics are a complete hit or miss for me. Generally, if I’m not invested in the related title, creative team, or concept 100%, I won’t touch it. As some people will agree, I’m just not that into these ‘earth-shattering stories’ having to exist outside of the regular ongoings if there’s not a good reason for them to do so. However, both “Dark Nights: Death Metal” and “X Of Swords” managed captured my attention purely on how much fun they look, and how unabashedly their creative teams are leaning into that.

“Dark Nights: Metal” was one of the most fun DC event comics in some time for me, so hearing that the same team is back and turning the dial past eleven this time for even more batshit nonsense this time is music to my ears, pun intended. If there’s anyone on DC’s roster that can draw a compelling post-apocalyptic setting and give Wonder Woman a chainsaw powered by her own Lasso of Truth in place of a drawstring, it’s Greg Capullo, and I’m all here for it.

Believe it or not, the confusingly named “X Of Swords” (I know it’s a Roman numeral, but I can’t stop calling it “X Of Swords” in my head) was a much easier sell. You’re giving me a poster drawn by Mark Brooks where every major “X-Men” character has a unique sword of their own and telling me little else? That’s all you had to do, baby! 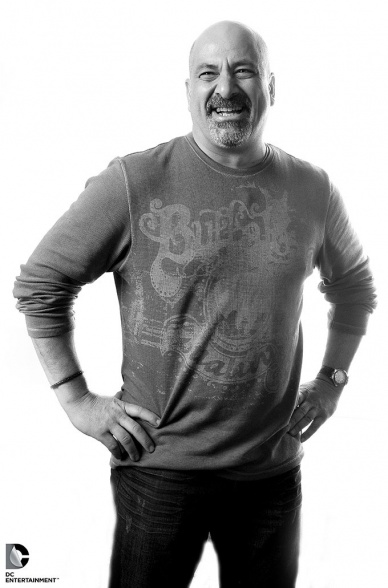 Most Shocking Big-Two Company Mic Drop: Dan DiDio leaving DC
Dan DiDio is one of those household names in the world of superhero comics that have been around for quite some time. Jumping aboard the DC editorial team around 2004 after years of television work and some minor “Superboy” scripting, he continued his tenure as one of the guiding names of the company until he was further promoted to Co-Publisher with Jim Lee in 2010. Since then, he’s been tied to DC’s biggest successes and pitfalls. The man was around for some of the great late-2000s DC continuity, and some of the soft reboots like DCYou (it had good second-tier titles! “Midnighter” guys!) and Rebirth were overseen by him and had strong starts. He was also around, however, for titles like “Identity Crisis”, which I won’t even begin to get started on, and the long-maligned New 52. The latter seemed mostly like a Jim Lee-guided initiative, but you can’t deny DiDio’s hand in it.

The whole event is shrouded in the unknown, especially on the heels of the recent “5G” announcements, and what will happen to that. There’s also been speculation as to DiDio’s replacement, especially from our own staff which you can find here, which suggest big names from Mark Waid and Grant Morrison, to more lesser-known but equally-capable picks like Shelley Bond or Dinesh Shamdasani. Whatever the case, DiDio had one of the longest tenures in his position in recent years, and certainly left an undeniable mark on the superhero comics industry. 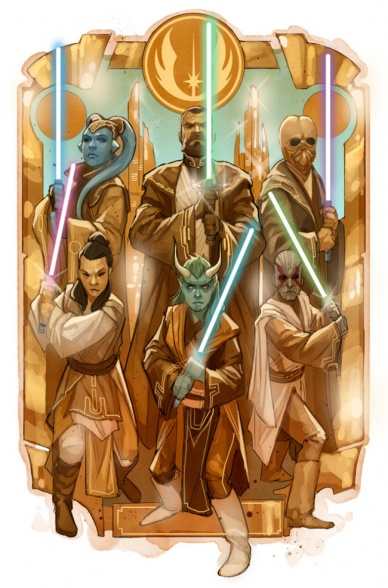 Most Pleasantly Surprising Linewide Initiative: Star Wars: The High Republic
After the uncomfortably hard-to-remove stain on the carpet that was Star Wars: The Rise Of Skywalker, I returned to my comfort zone of the old Dark Horse comics like “Star Wars: Legacy” and “Knights Of The Old Republic”. I was so checked out of the future of the franchise at Disney, it felt like we’d never get anything as adventurous or offbeat as these older comics could so often be. Lo and behold, the other day I see an announcement about something called “The High Republic”, and just the name itself felt so outside the Skywalker norm that my intrigued lit up again.Continued below

This initiative encompasses novels as well as comics, both of the usual sci-fi fiction affair and others more geared at YA audiences, which I’m always all about. It feels like the first time the Star Wars franchise has dared to do something exciting and unexpected under Disney and having it weave through multiple mediums makes it even more intriguing for me to pick up. Plus, as usual, there were plenty of buzzwords used to describe it in the announcement that tickled me pink; things like the landscape being more Arthurian inspired, Viking-esque criminals named The Nihil, and dinosaurs! Dinosaurs, dang it! 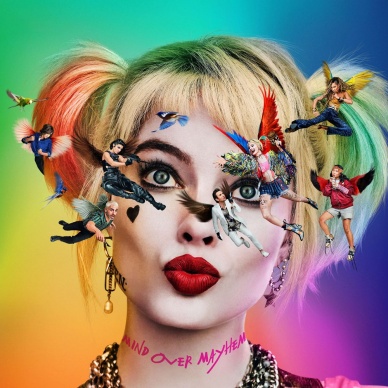 Best Comic Book Movie: Birds Of Prey (And The Fantabulous Emancipation Of One Harley Quinn)
Boy, did I have next to no expectations for this movie. But boy oh boy, wasn’t I just pleasantly surprised at how much fun I had watching Birds Of Prey! The Cathy Yan-directed superhero flick felt like it took elements from plenty that had come before it, learning from the missteps taken by Suicide Squad, learning what kind of meta-comedy worked in Deadpool, and taking from more recent Marvel movies and shows how to choreograph one of the slickest action sequences in recent years in the funhouse scene. Sure, the non-linear narrative can be a little over-complicated at times, but it certainly makes for a unique watch in the DC pantheon.

More than anything, though, the movie felt like a beacon of hope for female-led and queer-toned superhero movies. Harley Quinn, as the title foretells, spends the movie becoming an independent force, of which thankfully her prior partner isn’t present in this film to drag her back down. Margot Robbie absolutely kills this performance, delivering a thoughtful, hilarious, but often rogue-ish and fickle lead character, and the rest of the main cast work incredibly well in tandem. Plus, never have I seen Ewan McGregor having so much fun playing the most extra supervillain I’ve ever seen on screen. 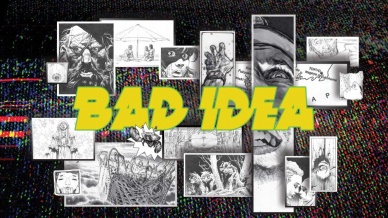 Best Idea: Bad Idea
Early on in the month, we folks at Multiversity Comics were clued into the next possible big thing in comics: Bad Idea. Helmed by the former editorial team that helmed the 2012 Valiant Universe reboot that proved there was room for another connected superhero universe in the industry, Bad Idea looks to be changing up the format yet again with big, bold statements on publishing and storytelling. The publisher seeks to buck the trend that comics have to go through the direct market to be a financial and critical success, with the company self-distributing their titles initially to only a small group of twenty participating comic retailers across the US, with more to come as the publisher rolls out more titles. It’s focus also looks to be more on quality over quantity, with the publisher deliberately limiting the amount of series it rolls out, with only one to two single issues releasing over a monthly period.

Regardless of how you feel about the radical publishing and distribution initiative, you can’t deny the fact that it’s proving that comics don’t necessarily need to rely on the direct market as much as they did. This kind of idealism slowly catching on can only be good for the industry, and Shamdasani and his team are certainly the types of forward-thinkers to spark what could grow into something bigger. Plus, you’ve got creators like Matt Kindt, Marguerite Bennett, Jody Houser, Lewis LaRoca, and Jeff Lemire lined up to contribute work for the company! I can’t wait to see how the publisher will roll out over the course of the next year.

This Month in Comics: January 2020

January is an annoying time in popular culture. The New Year has begun, everyone is still working through the post Christmas holiday cheer/hangover, and there really aren’t a whole lot of big conventions and opportunities for big announcements. The truth is that the people who make decisions in the entertainment industry tend to think that […]