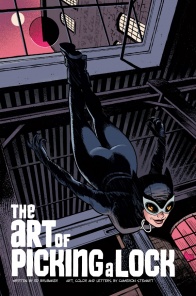 DC Comics are bringing together a star-studded creative line-up for another oversized anniversary anthology in the “Catwoman 80th Anniversary 100-Page Super Spectacular.” The comic is celebrating the last 80 years of cat-burglary and bat-romancery since Selina Kyle’s first appearance in “Batman” #1 back in 1940.

The issue will be made by touchstone “Catwoman” creators including Ed Brubaker, Cameron Stewart, Paul Dini, Ann Nocenti, Adam Hughes, Tom King, Mikel Janín, Mindy Newell, Will Pfeifer, and Emanuela Lupacchino, and will include a series of pinups by Steve Rude, Tula Lotay, Jim Balent, and more. Ed Brubaker and Cameron Stewart will reunite for a twelve-page story titled ‘The Art of Picking a Lock,’ that will act as a brand new epilogue to their iconic run.

The issue will feature a main cover by Joelle Jones alongside a series of decade-themed variant covers. The ’40s cover is by Adam Hughes, the ’50s cover by Travis Charest, ’60s by J. Scott Campbell, ’70s by Frank Cho, ’80s by Artgerm, ’90s by Gabriele Dell’otto, ’00s by Jim Lee and Scott Williams, and a 2010s cover by Jeehyung Lee.

“Catwoman 80th Anniversary 100-Page Super Spectacular” #1 will be available in stores and online on April 15.