Last week I started to grok the artistry of Yuu Watase, and this week I’m starting to fall in love with her writing. Yuu Watase mixes character scenes with battles, and lets the results of each play against each other in a steady rhythm that I just sink into every time I pick up the next volume. 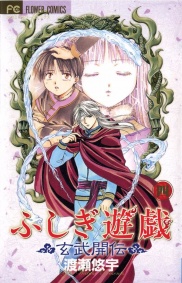 Takiko and her friends continue their journey to find the celestial warriors and complete the prophesy. Along the way they ride a dragon, are betrayed, and are loved. Tomite will learn about his own past, with the help of the fourth celestial warrior who holds an unusual secondary power. Although the mystery of why there are too many celestial warriors in the party remain, Takiko will find herself drawn back home at an inopportune time.

Story update: The story had a weaker start in this volume, the party didn’t find their way until after they escaped on a dragon who flew them to their next destination. The whole plot reads like a dungeon master trying to get her players back on track, and I love it.

Women and swords: It’s nice seeing a woman casually holding a weapon. I grew up with a lot of video games where female characters were normally healers, and only carried a proper weapon if they were emotionally closed off. Takiko is just a woman who knows how to use a naginata.

The right way to use a two page spread: Yuu Watase saves her next two page spread for a simple kiss. It’s a delightful change over the superhero standard of using two page spreads for a single, confusing action scene that doesn’t advance the story in any meaningful way. That much space should be reserved for an emotional impact. Watase knows what she’s doing.

A question: After the kiss, the ever-emo Limdo walks away. Dramatically, of course. Later on there’s another kiss, this time when they’re lying naked in bed together. (And I bet Takiko still doesn’t believe he likes her.) Limdo is too damaged to be relationship material, but this volume shows a lot of his character arc. Is Fushigi Yûgi: Genbu Kaiden actually the story of Limdo learning how to love?

Fushigi Yûgi: Genbu Kaiden is actually the story of father issues, a proof: In this volume, our adventuring party were betrayed by some kids who wanted money to bring their dad home. Limdo’s father is trying to kill him for being born a celestial. Tomite’s father died. Takiko spent another couple panels remembering the unfinished conversation with her dad.

Tomite in love: Tomite fights Hagus, the man in black leather belt face mask, alone. He is jealous of Limdo, or Limdo’s attention to Takiko, and, due to a confusingly placed dialog bubble, I choose to believe he’s in love with Limdo.

Limdo limit break: Strictly speaking, there’s no new limit break this week. But there is a nice onomatopoeia for Limdo’s power: Doom Thoom.

Translation notes: The translator uses the words thoom and foom a lot.

Deeper translation notes: I can’t speak or read Japanese, but I’ve been curious about the translation. I read this Fushigi Yûgi: Genbu Kaiden Volume 4 on Comixology, and then again on some pirate manga site. As I expected, the amateur translation lacks a felicity with language. What I didn’t expect was how the worse translation shows some distinct cultural personality. For example, when a boy is crushing on a girl, someone says to him, in the amateur translation, “You shouldn’t talk. Look at how your eyes glimmer!” In the professional translation, it reads, “Why don’t you wipe the drool off your face?”

Life of Limdo: Limdo exposes himself as Uruki, the female celestial warrior. He sheds his dual identities and becomes a single, unfractured human. And it was inspired by that one kiss. However, after opening himself up, he’s still holding onto his dual sex identity. This furthers my theory that he’s not at all confused on his sex, he simply has two sexes he chooses from, and is happy with that arrangement. Two telling quotes, “We can bathe together if I’m a woman!” Later, by Tomite, “you can’t even decide what gender you are!”

Life of Takiko: Takiko ends up back in Morioka, the “real” world. Much like how Limdo solved some of his problems in this volume, I predict that Takiko will finally abandon her crush on Ohsugi in the next volume. He’s a character who has literally no personality. Not even a single trait.

Power of elements: New celestial warrior Hikitsu has power of water. We now have the standard four-elemental arrangement of wind, fire, earth, and water. I wonder who’s next?