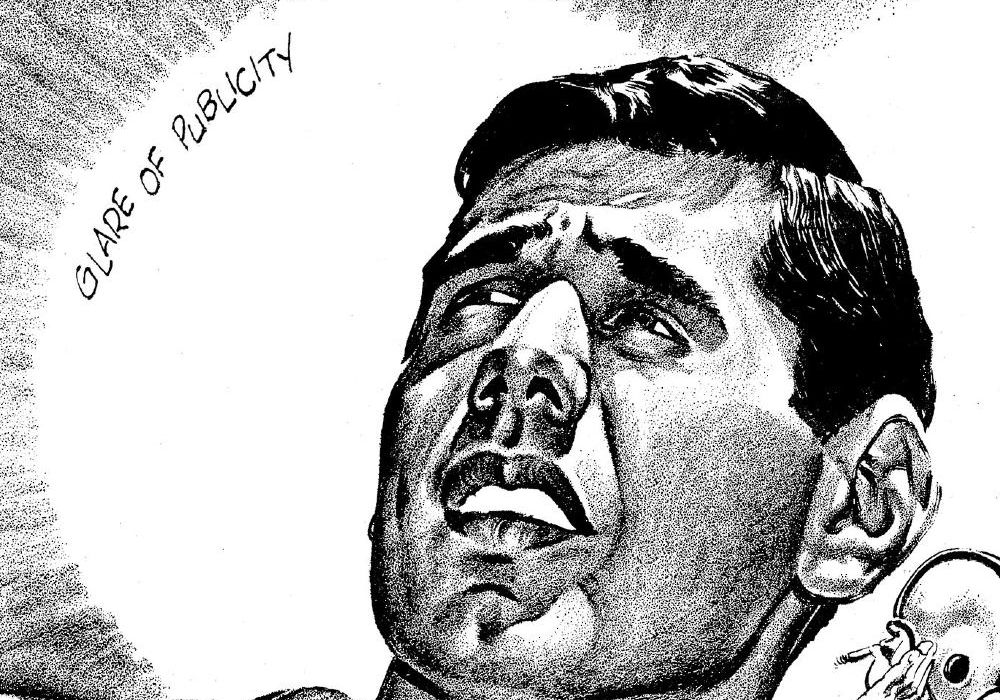 Sportswriter and cartoonist Murray Olderman, whose caricatures of sports figures were featured attractions in newspapers across America for decades, has died at the age of 98, The New York Times reports.

A journalist, columnist, and caricaturist whose pen captured the sports world in newspapers for more than 60 years, the advent of television and the digital revolution led to the end of the kind of artistry for which Olderman was known. “I am among the last of this vanished media species,” Olderman noted in the preface to his book, “The Draw of Sport.”

Born in Manhattan on March 27, 1922, Murray Olderman was the child of Russian immigrants. Growing up with only his father’s small salary from a sweatshop to support the family, Olderman’s interest in cartooning was first piqued by the sports cartoons in the discarded day-old papers his father would gather from bus seats on his commute home. He began doodling, attempting to emulate the style of cartoonists like Burris Jenkins, Jr. in the New York Journal-American, and Leo O’Mealia in The Daily News.

“My work initially was rudimentary,” Olderman told The Columbia Missourian in an interview in 2017. “But over time, I developed my own approach.”

Olderman continued to work on his skills throughout his schooling and through a three year stint in the army, sometimes publishing his sports cartooning in outlets like the Nyack Journal-News and The Stanford Daily. After graduating with a degree in journalism from Northwestern University, he received a job offer to be the sports cartoonist for the Sacramento, Fresno, and Modesto Bee.

As his career developed, his work was syndicated by the Newspaper Enterprise Association (NEA) and appeared in more than 750 newspapers from the 1950s to the 1980s. He became the sports editor for the NEA in 1964, and executive editor in 1968.

Olderman’s position as a cartoonist allowed him a special amount of access to some of the most influential and skilled athletes of his day. “Mickey Mantle and Roger Maris happened to think of me as a sports artist, not someone who was going to poke into their private sanctum.”

Before partially retiring in 1987, he received the National Cartoonist Society Sports Cartoon Award twice, in 1974 and 1978. He published several illustrated books over the course of his career; although his work primarily focused on professional football, he also published two volumes filled with lessons from his career: his memoir, “Mingling with Lions,” and “The Draw of Sport,” which featured his illustrations and reminiscences of more than 150 sports personalities.

According to The Columbia Missiorian, Olderman created approximately 6,000 cartoons over the course of his more than 60 year career. He is survived by his daughters, Lorraine and Marcia Linn; his son, Mark; and his sister, Diane Morton, as well as five grandchildren and three great-grandchildren. His wife, Nancy, died in 2011.

Reflecting on his career in “The Draw of Sport,” Olderman credited his career success to his hard work and dedication. “People have accused me rashly of inherent talent,” he wrote. “I could draw a line no straighter than the next guy. I just liked the looks of a cartoon on a sports page. And seduced by the art style, I was willing to put in the time to try to learn it.”

CBR reports former Marvel Comics Executive Vice President Michael Z. Hobson has died at the age of 83. Per his obituary in The New York Times, Hobson died on November 12, three months after suffering heart failure.Hobson was born on December 8, 1936, and was adopted as a baby by novelist Laura Zametkin Hobson. He […]