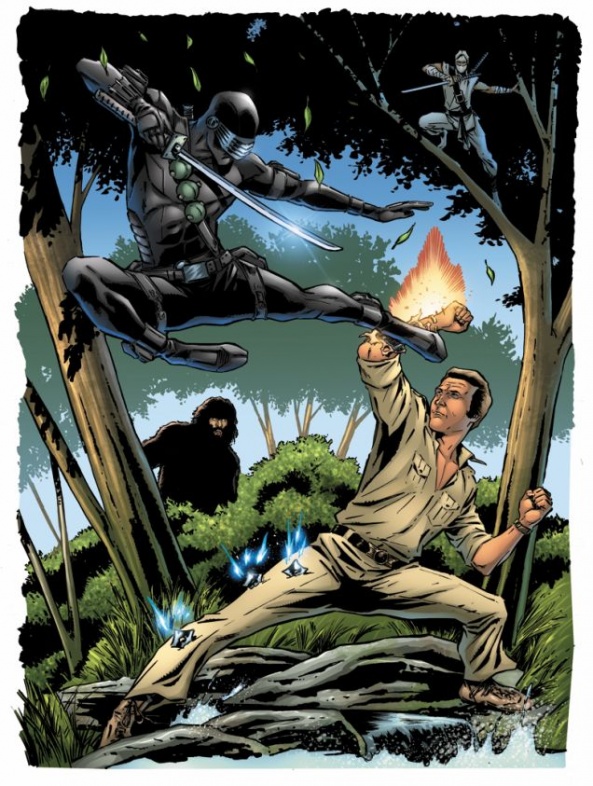 Next year, IDW and Dynamite will launch an inter-company crossover when the grunts of G.I. Joe and Steve Austin, the Six Million Dollar Man, meet. The four-issue miniseries, titled simply “G.I. Joe/Six Million Dollar Man,” will be written by Ryan Ferrier (“Kennel Block Blues,” “D4VE,” “Rocko’s Modern Life”) with art by “G.I. Joe” regular S.L. Gallant. There aren’t many details yet in terms of plot, but if we know comics crossovers there will be an initial conflict, followed by a team-up against a common enemy. And, as i09 points out, that sure looks like Bigfoot on the cover.

Dynamite first began continuing Steve Austin’s adventures with a series called “Six Million Dollar Man: Season Six” in 2014. Although the Bionic Woman crossed over with Wonder Woman more recently, this will be the first time the cybernetically enhanced Secret Agent of OSI (Office of Scientific Intelligence) will be joining another comics property.

IDW has been consistently surprising fans with unexpected crossovers of their many franchise series. There’s the aforementioned “Bionic Woman/Wonder Woman ’77,” as well as more recently “Batman/TMNT” and the in-house ‘Revolution’ that sees characters such as Transformers, G.I. Joe, TMNT, and Rom engage in large-scale event books.

“G.I. Joe/Six Million Dollar Man” will be released in January 2018.