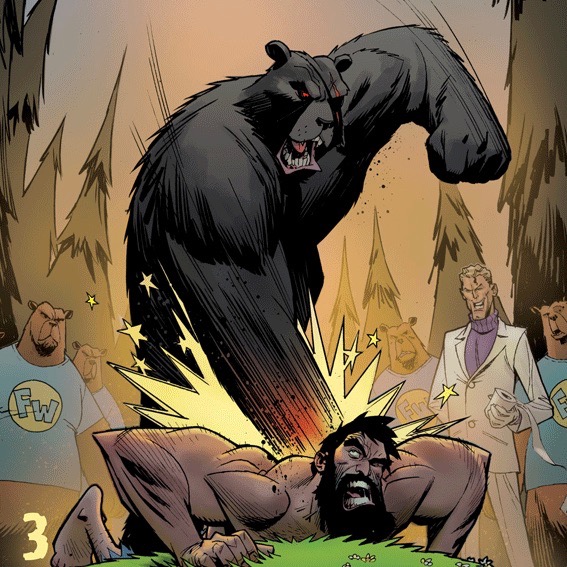 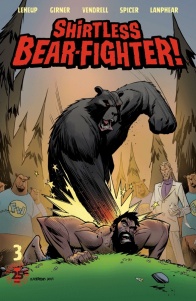 The mighty Shirtless is in the clutches of Fuzzy Wipes(TM) CEO Jaxson Logger, and it’s up to rogue FBI agent Suzie Silva to bust him out! Don’t miss bear-brawls, golden toilets, and…BETRAYAL in SHIRTLESS BEAR-FIGHTER #3!

After battling and defeating countless gangs of bears that were high on magic bacon in the previous issue, “Shirtless Bear-Fighter” #3 begins somewhat confusingly with a tangential flashback. A young agent Suzie Silva (Shirtless’ budding romantic interest, even if neither of them knows that yet) follows her startled pet cat high into the branches of a tree, only to come tumbling down. We never see what happens next – we never see her land – and we’re not entirely clear why the scene is important. Maybe it’s a riff on following orders versus following your instincts. Maybe it means something more. Maybe we’ll never know. In any case, thankfully, after this three page diversion, we dive straight into the action. And just like in previous issues, that means hijinks, mayhem and bear puns.

Feel like you’re still on the fence for some inexplicable reason? Check out the internal title page where Shirtless sits lashed to a chair, tied down by toilet paper. The scene is a perfect example of the creative team’s considerable talents and no-holds-barred attitude. It’s also testament to their kitschy senses of humor, unashamed commitment to the concept and – to be honest – the clear and compelling world building that thoroughly infuses the book. For real.

After untying Shirtless from the chair and yanking the toilet paper out of his mouth, Suzie asks incredulously, “What did they do to you?” Shirtless responds in a faltering cadence, “Made me…wear…a shirt…. My greatest weakness….”

A shirtless bear-fighter imprisoned in a shirt is no a bear fighter at all. In fact, he’s barely (or bearly, as writers Jody Leheup and Sebastian Girner would likely say) even a man.

It’s exactly this unyielding dedication to its own internal logic (with a huge dose of irreverent humor) that not only keeps this book on track, but actually enhances the fun. Defined on its own terms, the story absolutely makes sense and it’s a blast. Still, first glance to the contrary, it’s not merely unbridled silliness. There is a genuinely well constructed story here to provide an excellent framework for witty dialogue, clever wordplay and unapologetic sight gags.

Visually, artist Nil Vendrell’s thick, decisive lines tell the tale with simple, bold imagery that drives the story forward from one panel to the next. Meanwhile, Mike Spicer’s vibrant colors make it clear that this is a fantastical cartoon world, but his simple, subtle shading gives everything just enough shape and dimension to keep it all tethered – if ever so slightly – to the real world. Then, Dave Lanphear’s incredible letters come along to do the complete opposite, scattering virtually every page with a well timed bear punch or guttural growl, punctuated by a steady stream of yoinks, rips, zips and whams that simultaneously augment the story on both a visual and verbal level. Indeed, throughout the issue there is a consistent, well crafted balance between campy, over-the-top humor and a simple, engaging story.

Ironically, for a genre and a medium that’s essentially built on wild flights imagination and boundless creativity, it seems like too many comic books take themselves a little too seriously, forgoing vision and inventiveness for an often paradoxical adherence to “the rules” as the creators understand them to be. “Shirtless Bear-Fighter,” by contrast, plays by its own rules. There’s a refreshingly untroubled, relentlessly carefree attitude that says, we’re just gonna go for it here and see what happens.

Nowhere is that more apparent than the moment when Jaxson Logger, the book’s central villain, takes a dump on a gold-plated toilet while detailing the nefarious plan that led him to the point where he’s about to clear-cut Shirtless’ beloved forest. Honestly, the scene is kind of insane, but again, it all makes total sense. Logger owns a toilet paper factory, after all, so what better way is there to prove his maniacal commitment to his devious plot than to poop on command? He even punctuates his diabolical tirade with a red-faced Hngh. Now that is an antagonist worthy of a larger-than-life opponent who was raised – and later betrayed by – bears!

There are some definite moments of tenderness too, mixed in with all the craziness (especially in the final cliffhanger image), but they never feel forced or inauthentic, they just keep you on your toes, expecting the unexpected.

Final Verdict: 8.6 – “Shirtless Bear-Fighter” #3 continues to deliver on the book’s titular premise with shameless humor, epic battles, relentless bear puns and over-the-top characters. Underneath it all, however, lies a compelling and well constructed story with moments of surprising tenderness.